How a 5-Ton African Elephant Crosses an Ocean

How a 5-Ton African Elephant Crosses an Ocean
Zimbabwe just put its wildlife up for sale. What does that mean for the animals?
By: Nicola Payne
Jun 6, 2016
SOURCE:http://www.outsideonline.com/2086576/how-5-ton-african-elephant-crosses-ocean 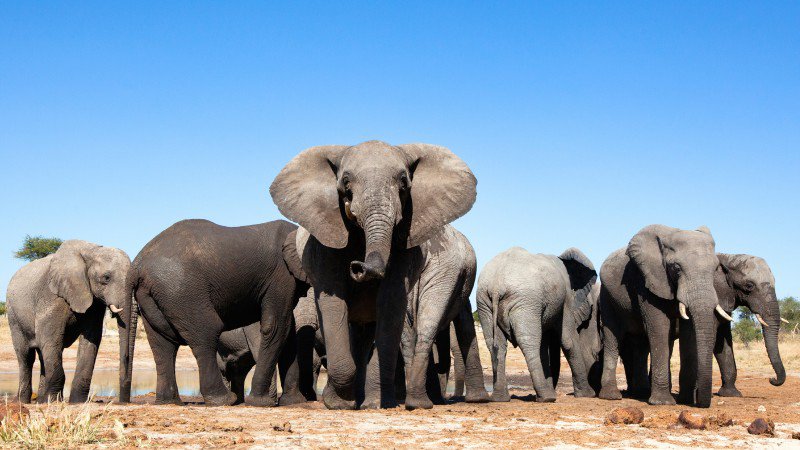 Zimbabwe is selling off its wildlife in what officials there are calling a conservation solution to a devastating drought that is depleting food sources for both humans and animals. The announcement last month from Zimbabwe’s Parks and Wildlife Management Authority (called Zimparks) includes specific instructions for potential buyers: fill out a $50 “Expression of Interest” form stating their intended use for the animals then mail it to Zimparks’ Harare office in an envelope labeled “LIVE ANIMAL SALES 2016.”

Zimparks did not identify the species they intend to “destock,” but lions, impalas, zebras, and elephants are some of the animals up for sale, according to Zimbabwe newspaper The Herald. Pangolins, pythons, and rhinos are protected against sale or hunting by the Parks and Wildlife Act of 1975 and cannot legally be traded. Elephant trade, however, is legal under CITES, the global treaty on wildlife trade, and a sold elephant calf can bring in anywhere from $40,000 to $60,000,according to National Geographic.

Zimbabwe has bartered elephants to reap financial windfalls before. In July 2015, for example, Zimparks made nearly $1 million when it sold 24 baby elephants toChimelong Safari Park, a “wild animal theme park” in China’s Guangzhou province that is notorious among animal rights groups for its inhumane treatment of performing animals. In March, Chimelong placed an order for 130 more African elephants, according to Zimbabwe Conservation Task Force chairman Johnny Rodrigues.

Zimbabwe authorities have been open about their plans to sell the country's wild animals again. “Our ecosystem cannot handle such a large number of animals,” Zimbabwe’s minister of environment, water, and climate, Oppah Muchinguri, toldChina Daily News in January. “So we would rather export and sell more elephants and other animals to those willing to take care of them.”

It’s unclear exactly how many elephants Zimbabwe has. Muchinguri says more than 80,000. The African Elephant Specialist Group of the International Union for Conservation of Nature (IUCN) has reported 45,000, with the bulk of them in northwestern Hwange National Park, the country’s largest game reserve. Whatever the number, it’s likely dwindling as elephants in Africa are being killed for their ivory faster than they are being born, The Guardian reported in March.

Elephants transported overseas undergo complicated, life-threatening journeys. And since one Harare-based conservationist, who asked to remain anonymous, told Outside that Chinese teams operating at night in Hwange National Park have already begun rounding up animals in preparation for sale, more animals' lives could soon be at risk. This is how an African elephant would be captured and transported.

The Capture
First, an elephant must be separated from its herd. To do this, Zimparks will fly helicopters overhead and use gunfire to send the animals scattering, Rodrigues says. At that point, rangers on the ground will zero in on a target elephant and use an air rifle to shoot it with a tranquilizer dart.

The preferred sedative is Etorphine, or M99, which will kill an elephant if its effects aren’t reversed soon after it’s administered. The drug takes effect in about ten minutes, causing the elephant to keel over. The elephant is then blindfolded and a blood sample is taken. An antidote (Diprenorphine, or M50/50) is administered within 20 minutes or so, and the elephant is slowly coaxed to its feet and marched into a custom-built, cube-shaped transport container.

Built to minimize the chance of injury, escape, and danger to nearby humans, the containers have solid metal and hardwood frames. Their hinged doors are secured with a series of metal bars across the front and a groove for forklift extrusions runs along the bottom of the cage. According to the International Air Transport Association’s (IATA) stipulations, the container must “be of the size and strength to restrict the movement as well as restrain the animal in question. The animals must be able to stand naturally without being cramped but must not be able to move freely.” IATA also specifies that the cages must provide ventilation openings through a slatted portion of the roof and accessible areas for food and water to be passed through. Inside, the elephant’s feet are chained to keep it from moving around.

Training and Bureaucracy
The elephant is trucked in the container to an outdoor enclosure called a boma—Swahili for “place of concealment”—where it could be held for months. During this waiting period, the elephant is trained to accept its travel container without becoming stressed. “Zoos or officials from the destination country will usually send trainers over to start the process of breaking the elephants, calming them down, getting them ready for the arduous transport trip ahead of them,” says DJ Schubert, wildlife biologist for the Animal Welfare Institute. “The trainers teach the elephants basic commands and test them for any diseases.” This training can be done with food and positive reinforcement, as sanctuaries do, or with bullhooks and other painful training tools. While the elephant undergoes its training, the source and host countries arrange the routing reservations and relevant documents.

The Transport
When the paperwork is ready, the elephant is dead-bolted inside its container, which is then forklifted onto a flatbed truck and driven to Harare International Airport in the country’s northeast. Air cargo companies or military air force cargo jets are used for the flight. The interior layouts of the planes are modified to fit the animal containers and the accompanying vets and keepers.

There are no time caps on the transports. The 24 elephants sent to Chimelong, for example, spent 48 hours in transit.

The Risks
Ed Stewart, one of the founders of PAWS, a non-profit dedicated to rehabilitating hurt or orphaned wildlife, has relocated many animals from dire situations to his northern California wildlife sanctuary, ARK 2000. He calls the moves “military operations.” He’s never had an animal die or become injured on a move, but he emphasizes that it can—and does—happen.

“Elephants can die from suffocation when they go down [in the container], either from slipping or lying down from exhaustion,” he said. “That suppresses their organs. The container is too small for them to lie down on their sides like they’re used to; they can only go down on their chest and knees. If that happens in an airplane then there’s nothing anyone can do. It’s an emergency situation.”

The IATA stresses in its guidelines that all transported animals be kept cool during takeoff and landing, well-hydrated throughout the trip, and given just the right amount of food and sedation. Otherwise, they can easily become dehydrated or go into shock.

Arrival
After landing in the destination country, handlers unload the elephant’s container from the plane and fasten it to a commercial, flatbed truck with the capacity to handle the load (an African elephant typically weighs between 4,000 pounds and 14,000 pounds). The elephant is then driven to its final location.

Under U.S. laws, animals coming from a foreign country need to be quarantined for 30 days, so a recently-imported elephant wouldn’t immediately go on public display. According to Stewart, the quarantine period has an unintended benefit: it gives the animal some time to recover.

“The strain from the move doesn’t go away when they get there,” he says. “The animals are still very stressed by what they’ve been through."

They should take lessons from the Save Conservancy. They relocated entire family units in 1992, saving stress and allowing the families to stay together. Quite successful, although not having to be flown overseas helps as well.
It's not the years, it's the mileage......(Indiana Jones)

Pieter thank you for sharing this. Somehow I missed it when posted back in June!

Why do news agencies keep quoting Johnny Rodriguez, time and time again he is proven to be a liar. As soon as I see him quoted on anything I immediately stop considering it news because I know it is a bunch of crap.

It's just plain Dispicable.
Tommorow is promised to no one. Go live your dreams.

Why can't they just build corridors and let the rest settle itself? Seems the more simple situation.

tigris115 said:
Why can't they just build corridors and let the rest settle itself? Seems the more simple situation.
Click to expand...

Not a bad thought really but nothing is simple in Africa!

Thank you for posting this, Pieter, very sad but informational.
Leah Page
jdsafaris.com
You must log in or register to reply here.

Elephant Death Toll In Zimbabwe Rises To 200 Amid Severe Drought

African Elephant How To Die

How ‘Endangered Species’ Destroy The Environment

‘Should We Rather Kill People?’ – Botswana Defends Elephant Hunting Decision