I just bought a very nice Sabatti 92 Safari Deluxe in 500 NE caliber from Cabelas at a very reasonable price. It was advertised as having been re-regulated, but there was no test target or any indication of "who" did the work, or what ammo was used. It appears that whoever did the re-regulating also tuned the triggers, (smooth 5-1/2 and 6-1/2 lbs) and also upgraded to a NECG recoil pad.

The wedge has been left protruding, so this may be a clue as to who did this. I know that JJ sometimes leaves the wedge protruding because he did so one of my other doubles that he regulated for me. However, I am told he does not re-regulate Sabatti doubles.

I've talked with Ken Owen, and its not his work. He told me he always has the wedge flush.

Not sure who else does Sabatti re-regulation. I've been told not too many gunsmiths will re-regulate Sabsatti because they lack a wedge and some are hard soldered.

Anyone have any other suggestions? I'd like to find out what ammo its regulated for, before going through a lot of trial and error shooting. 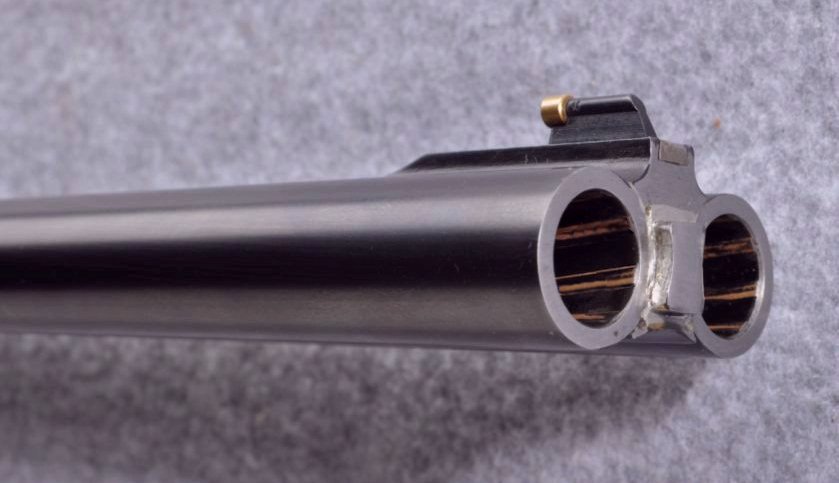 Wish you the best of luck with the new rifle. Once you find out the who, let us know about the upcoming target groups. Gorgeous piece!

Did you get a good deal on the gun? It looks really nice!

thanks for the reply.

Yes, I got what I consider a "very good" deal on the rifle. I see you are in wisconsin ... where? .. I live south of Appleton.
".. you never pay too much for something, you only buy it too early .."

I'm living currently down in Jackson, WI, I'm pretty close to the Richfield store. I see it everyday I work. And I use to live about 2.5 miles from the Green Bay location of Cabelas

good luck n finding out who did the regulation job. I know the factory regulates them with Hornady ammunition so thats a good starting point if you want to shoot some rounds

Yes, I've been told they used Hornady Ammo. But I'm not sure that was the ammo that was used for the re-regulation. But I will test Hornady ammo someday.
".. you never pay too much for something, you only buy it too early .."

My Ma's from Florence, does that male me part Cheesehead?
Be Yourself Everyone Else Is Taken

And proud of it, takes guts to back a Loser
Be Yourself Everyone Else Is Taken

And proud of it, takes guts to back a Loser
Click to expand...

Well you are loyal, that is good quality. I like the Brewers and they are losers every year.

Yes, I've been told they used Hornady Ammo. But I'm not sure that was the ammo that was used for the re-regulation. But I will test Hornady ammo someday.
Click to expand...


Hornady is the standard for many 500 NE rifles because its both cheap and available. (i would prefer Norma)

thanks for the reply.

I'm still trying to find out who in the Colorado area had the rifle re-regulated, here in the U.S.
".. you never pay too much for something, you only buy it too early .."

enysse said:
Well you are loyal, that is good quality. I like the Brewers and they are losers every year.
Click to expand...

I too am looking at a Sabatti in .500 NE, so please post a review on it! I have held one and almost pulled the trigger on the purchase, but am still nervous as I read mixed reviews. I dream of a .500 NE and, for now at least, Sabatti would be my only option. Feed me info please! Lol

I think its important to get one that has been re-regulated (like mine) or plan on finding someone that will re-regulate it for you.

Also, the comb is too high, and the rifle is too light. Every time I would shoot it, it would "bite" me in the cheek bone.

This was my photo-shop mock-up before starting the stock re-work. 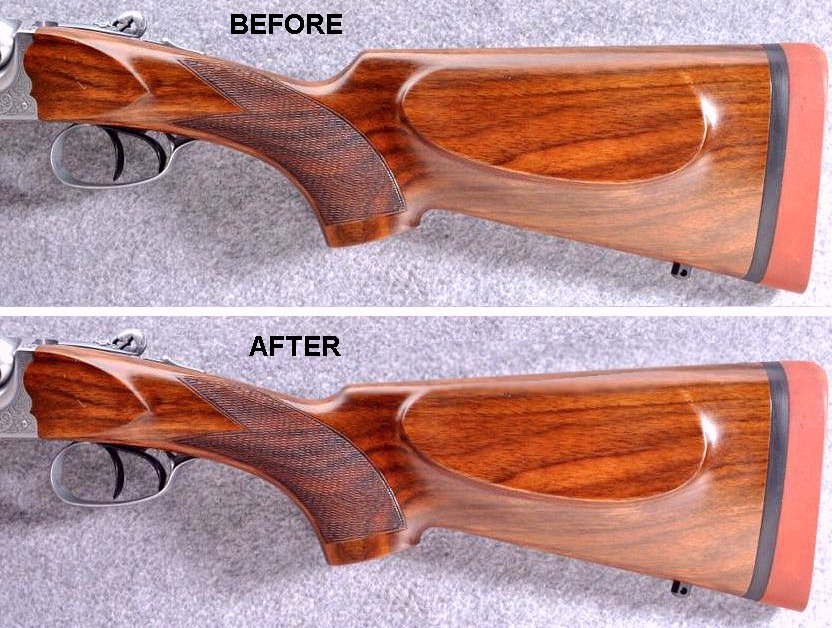 This is how it turned out. I actually removed about 7/16" off the comb, and it totally quit biting my cheek bone.

I also added some weight in the stock. Its a bit "back heavy", but it swings fast on target, which I think is the most important factor.

Also, I believe price is a big factor on these. What price were they asking on the rifle you were thinking to buy?

$4500.00 from Cabelas. Haven't actually looked at it to see if it has the ground rifling though. Thank you and keep me updated as I am looking for a .500 NE double. Yours turned out really nice by the way!

buckstix said:
Also, the comb is too high, and the rifle is too light. Every time I would shoot it, it would "bite" me in the cheek bone.
Click to expand...

Now this is interesting. My Lott bites me and although I suspected it was a fit issue I didn't know exactly what it was. This might help me to figure it out. I still don't have it scoped, so I guess getting the scope on and seeing what happens is the next step.
HUNTERS make importation bans work!

I like what you have done with the comb.

Looking at the muzzles it seems to have escaped the "Dremmel regulating". Good.

What have you fired through it so far and how did it regulate? Don't know if you hand-load but that will probably be the way to go. This is usual with most doubles unless you are lucky or they have some kind of user friendly adjustment (Blaser S2 for example? I think)

If both barrels shoot level (i.e. horizontal)* then all is good. Then it comes down (usually) to velocity.

If L & R are crossing then decrease velocity. (Less powder/heavier bullet or mixture of both)

NB. Increasing the velocity may also lower the POI (and vice versa)

Its all about "barrel time" i.e. how long the bullet is travelling down the barrel whilst the recoil forces effect the position of rifle at the time the bullet leaves the muzzle and where the rifle is pointing when this happens.

The right barrel will generally move up and right the left does the opposite. (well that is my understanding of the dark art!)

(This is why you need to "regulate the rifle" in the same shooting position as you would use it in the field, i.e. off-hand or sticks, not on a lead sled)

Higher velocity may also lower the POI (and vice versa)

Good luck and keep us posted

* If both barrels do not shoot level than that is a whole different can of worms.

One step at a time…and…

Keep us posted and I hope this helps.

Royal27 said:
Now this is interesting. My Lott bites me and although I suspected it was a fit issue I didn't know exactly what it was. This might help me to figure it out. I still don't have it scoped, so I guess getting the scope on and seeing what happens is the next step.
Click to expand...

If you want to test if the comb height is a factor in biting you .... fashion a front site about 1/2" - 3/4" higher with some masking tape. This will raise your cheek off the comb. Then shoot the rifle. You'll be surprised at the difference. No more biting.
".. you never pay too much for something, you only buy it too early .."
You must log in or register to reply here.