Hello, I am Markus Kamarga from Chino Hills, California

MWK, welcome to the AH forum! Enjoy all the great info on here!
Africa on my mind.

Welcome to AH. While touring the site take note of the hunting reports and feel free to create one of your own to share the tale of that Warthog hunting Safari.

Welcome aboard MWK. From your avatar you've already hunted Africa at least once. Have you already started planning your next trip? What else have you hunted? What kind and caliber rifles do you own?

Welcome to AH! We look forward to you sharing your stories!

Hi Everyone, thank you for the warm welcome and just realized there are so many replies already. I will try to answer the best I can.

My first South African safari was in July 2014. My PH was Bertus Gerhardt who is also the owner from Dumukwa Safari. I took Buffalo and Sable package to split with a friend who can't go. He was booked for Sable and I was booked for Buffalo. I ended shooting his Sable on his account. After my wife saw the Sable picture; she asked me to shoot another Sable. Everyone here know it is a good idea to follow the wife order and I took another Sable.

One day the PH told the driver to slam the brake as he saw a beautiful Nyala. We negotiated the price in less than 3 minutes, jumped from the truck and set up the shooting stick. The 308 Lazzeroni roared and I saw the Nyala jumped, I know I hit it hard. We went uphill to retrieve the Nyala; to our surprise another Nyala jumped and ran away. Bertus asked if I hit it solid; I said yes. On the way back downhill to our pleasant surprise we found our Nyala that fell down. At the skinning station the Nyala heart blew up from my shot. I used Swift Scirocco sending 180 grain at 3,400 fps. Too make long story short; I went way overbudget because I took an Impala, Zebra, Nyala, Sable, and Warthog. The budget was to take Buffalo only and may an Impala.

The Buffalo was harvested with 416 Lazzeroni. It is a CZ550 chassis modified by Christensen so I have Christensen barrel and MacMillan stock. I was using Barnes TSX 400 grain. It is sending the 400 grain bullet at 2,500 fps. It was a frontal shot at about 70 yards. The Buffalo walked less than 25 yards and dropped. Bertus asked me to shoot one more at the shoulder for good measure. At the skinning station the skinner showed me the heart. It looks like a knife cut the top of the heart. I was pleasantly surprise the buff has 40.5 inches spread with a very good boss.

Right after South Africa I went to Namibia. I forgot the name of the outfitter. To be honest I am spoiled after South Africa. In fact I was scheduled to go to Namibia first due to change of schedule the hunt was reverse. Nambia is an open country and most of the shot are long shooting 200 yards and over are not uncommon. My friend and I split a package. Again I ended up shooting his animals on his accounts. I shot two Red Hartebeest, two Gemsbok, one Blue Wildebeest, one Black Wildebeest, two Warthog. Kudu supposed to be in the package but per the outfitter there was disease and drought that year that affected the Kudu population. We exchanged the Kudu with the Black Wildebeest. Not in the budget was a Springbok which I shot with 416 Lazzeroni because I don't time to switch rifle to the 308.

In 2014 I went with my son. He shot with camera. In 2015, I went back to Dumukwa Safari with two friends. One shooter and one camera shooter. I finally able to shoot a Kudu that you see in my avatar now. It was a 52 incher straight spiral which I prefer. It was hard hunting not physically but mentally. This animal was called the Grey Ghost for nothing and it was very smart. It is almost like pronghorn hunting in Wyoming. The babies come out first to drink then the female teenager then male teenager, then adult female, then adult male. Bertus got frustrated with me because I can't see the Kudu that he want me to shoot. I was shaking because of excitement and I was pointing the 416 at the wrong direction. He asked me to take off my eye from the scope and just look with my eye ball and I still can't see that damn Kudu. Until I saw something white moving; it was the chin from the Kudu chewing leaves. I told Bertus I saw the Kudu now; he said the Kudu will walk through an opening which I must shoot quick. The female matriarch already barking as she senses something is not right. The Kudu walked through the opening and failed to take the shot. He said Markus the Kudu will walk through another opening and if you don't take the shot he will go and we will never found it again for that day. This time the 416 roared and the Kudu dropped like a sack of potato.

Over the years Bertus and his wife Elene become good friend every time we met at SCI I always took them for dinner. Both of them took care of me in South Africa; they are fun to be with; their hunting lodge is first class the food is outstanding. Elene always buys biltong whenever she picks me up at the airport. Biltong of various game are ready in the car for me and my friend to snack during the long drive to the hunting lodge.

Sorry for the rambling reports. I am attempting to give two years hunting report. I am a NRA Life Member and SCI Life Member. I started hunting with my late father back in Indonesia. Mostly for bush pig and rusa deer. Hunted in Wyoming for pronghorn and bison. Hunted in New Zealand for Red Stag. But nothing is like South Africa. I have to say I am addicted to South Africa.

Regarding questions for the next trip from Shootist43. I am booked for PAC Elephant this coming June 28 through July 9. Another friend will join me. He never hunted this far before mostly in Wyoming. He has a total of 10 animals including Buffalo and Sable. This will be my third rodeo with Dumukwa Safari.

Hope I am not too boring for the readers here.

Will give everyone here another report after I am back from the PAC Elephant hunt. 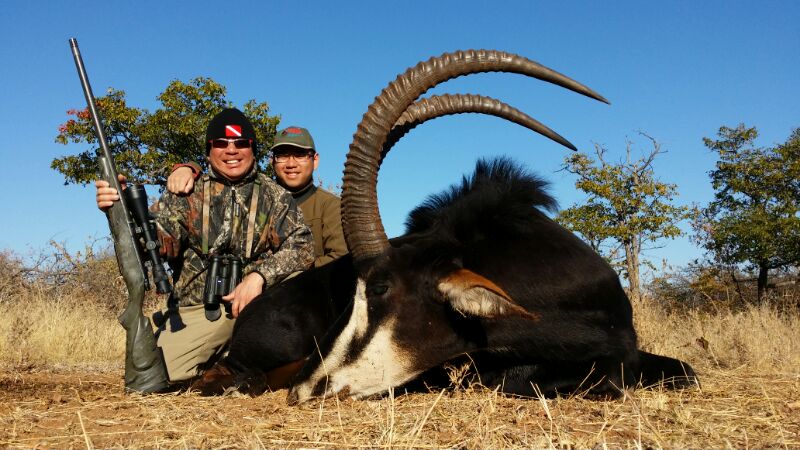 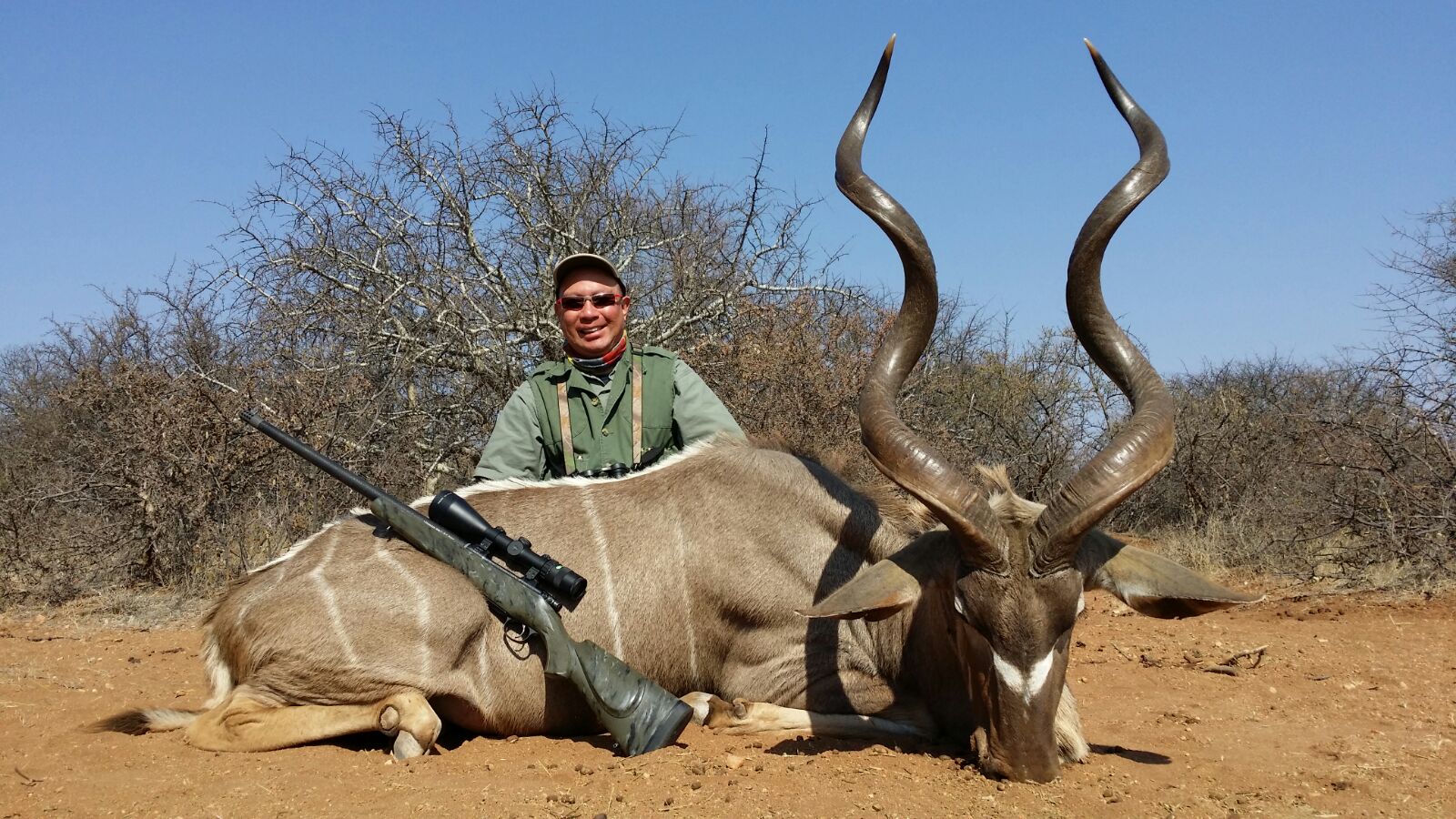 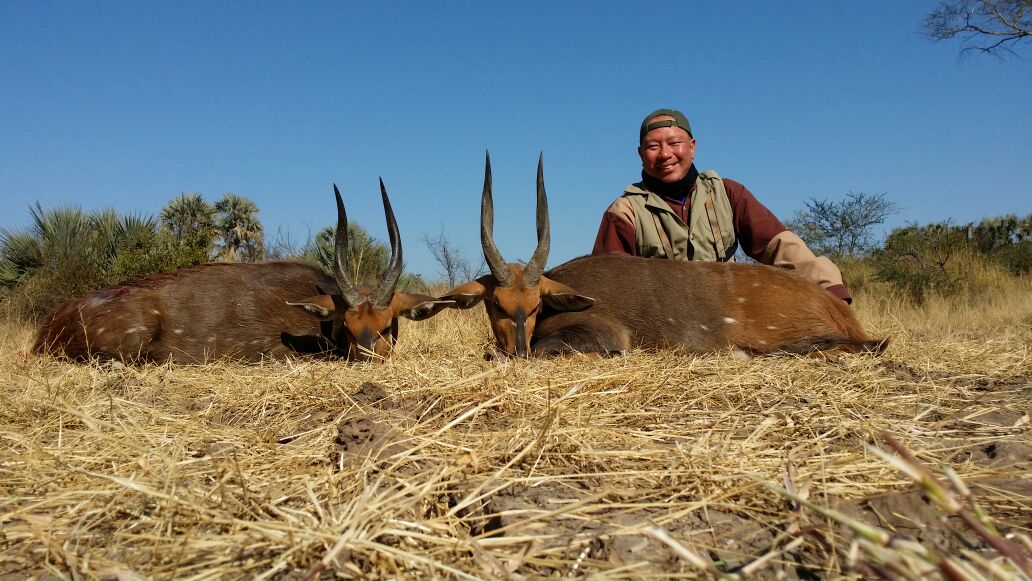 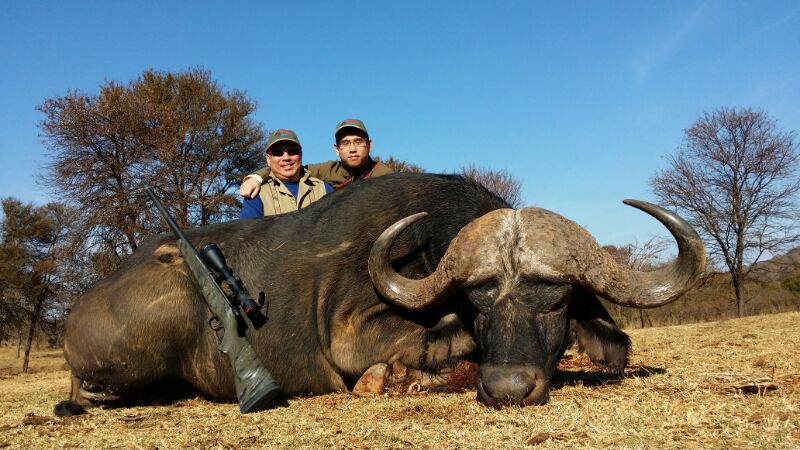 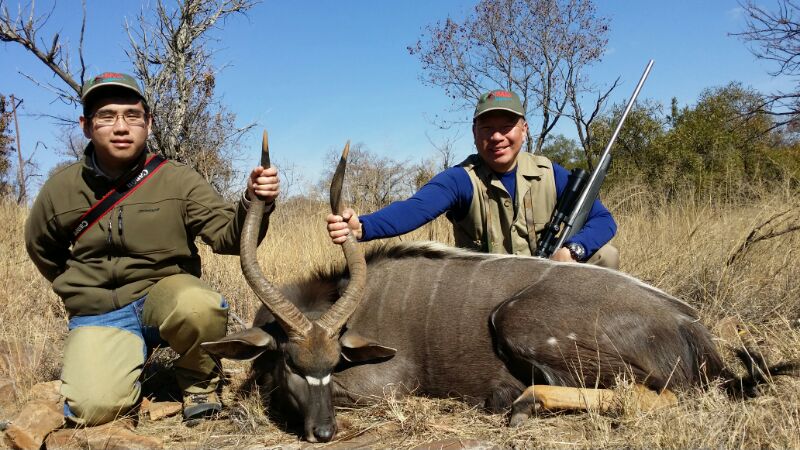 One more, for this upcoming trip I will be bringing the 416 and my 460 Smith & Wesson just in case I want to shoot an Eland.

Welcome to AH! Glad to have you on board.

Whackin & stacking for sure! Thanx for the report and welcome !
You must log in or register to reply here.

New to this site