The last 10 years - I have done all my hunting with a handgun.
South Africa - is the country which every handgun hunter should visit!

With those guns/calibers - I'm ready for everything!

A .454 with optic: Docter-sight or scope 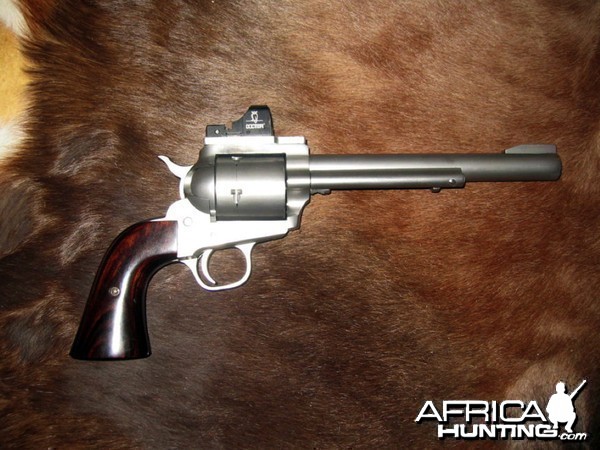 is a short distance gun.
100 m for an animal with a size of a Blue Wildebeest is far enough. 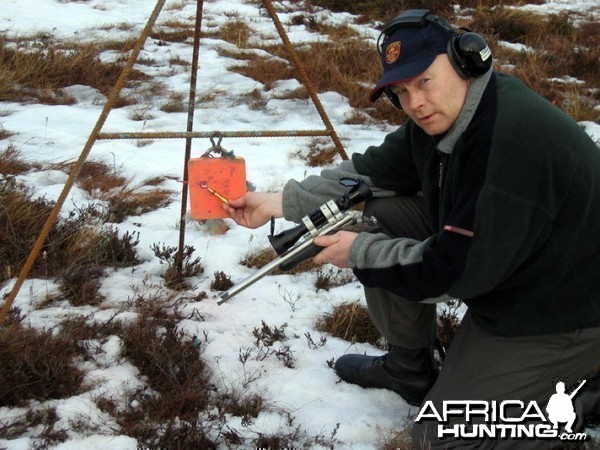 At the shootingrange – on a steelplate or some paper – where the target is standing ”broadside” all the time until you are ready to shoot – yes!

But are most of the huntingsituations like that? No!

The animal is standing in a angle, and the vegetation doesn't do it easier (a branch or two is always in front of where you want to shoot).
Open sights where you have to have a focus on the front sight – doesn't make it possible to have “control” on the target.

When using a scope or red point sight – you put the dot or cross where you want to hit – and still have “steel-control”.

If you don`t find it – you become frustrated, you loose the pleasure with hunting, loose time – and you must pay for the trophy.

Clothing
It`s not difficult to choose clothes when you hunt in (+) 25-30 degrees, but small details can do it more pleasent for you.

Handgun hunting means a lot of crawling. You can`t sit on the other side of the river and shoot the animal which is standing 250 m away from you.
You most cross it! 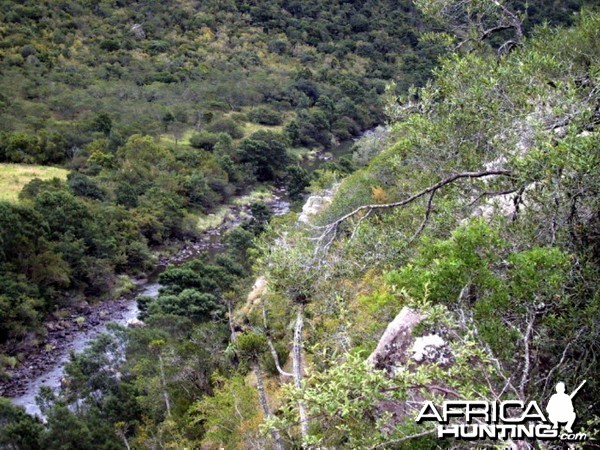 To protect my knees – I have bought similar pants as a bricklayer use.
On the knee – there is a pocket with a pad.
Sore knees belongs to the past! 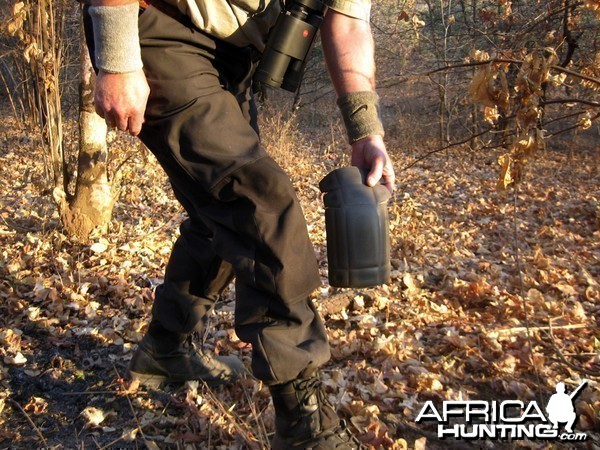 A steady hold is a must for a hand gunner.
Sitting position with your back against a tree, rock or that your friend support you with his foot or back – and your barrel is resting on the shooting stick – is the best position.
But Murphy`s law do this impossible in the most times.

High grass or bushes - don`t let you have a position like that.
Therefor - a more “daily” rest - is your wrist against a tree or a rock.

Trunks, thorns and rocks will be painful when your gun is recoiling.

Protective gloves (like the police use) will do this rest more harmless, but the gloves is too short to protect your wrist.
Sweat bands is the key-word.

And you can dry your face with the bands. 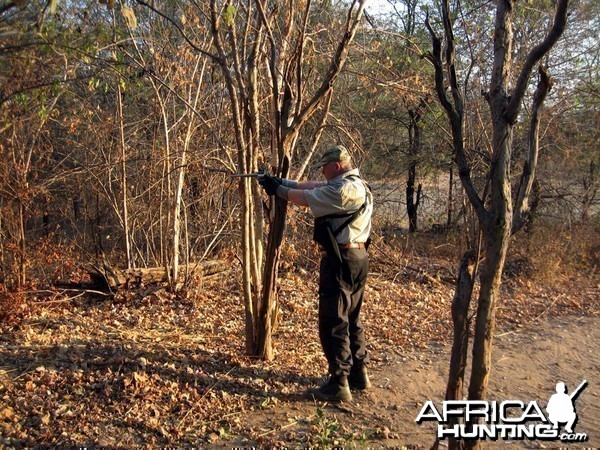 You must use sweatbands on both armes – because you don`t know what side of the trunk you will be standing. 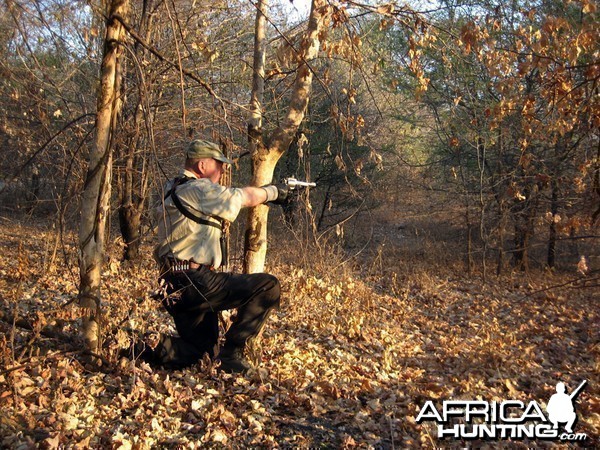 Choice of bullet
Proper bullet is important for a successful hunt.
Accuracy is one thing – but will the bullet crack or expand too much/little?

When you are hunting dangerous game like a buffalo – it is very, very important that you have done your homework.

In August -06 I traveled to Zimbabwe together with my South African friend and outfitter Johan Dreyer from Hunt Africa, www.safarishuntafrica.com.

I chose the FA .454 as my buffalo gun.
Before the hunt – I spend a lot of time testing a good bullet, and I found Frontier`s 390 gr. FP as the perfect big-game bullet.
The bullet penetrated very well, and the accuracy was also good.
But – the crimp drill was not deep enough.
Sometimes (even that I used Lee's crimp die) the bullet loosened a little bit – and the cylinder could not rotate.

What would happen if a bullet loosened after a shot on a buff which was standing 30 m away?

I couldn`t take that chance on dangerous game!

A friend of mine – “Calibros” – had shot a giraffe and some other big antelopes with his homemade “Caly 378”.
This is a 378 gr. hard cast bullet with a deep crimp drill.

Zimbabwe
We arrived Harare – and after 1,5 hour with a charter – Corris and Rod Ferreira wished us welcome to their camp – which was close to Lake Kariba.

They said that within all the years they have been hunting for buffs – they have seen a lot of them which was running away for a long distance with bullets from 500 NE in the body and bla, bla, bla.
In the camp – there were some other hunters too – and nobody had any believe in my short buffalo gun.

My only support was Johan. He was sure that I would do my job!
Well!

Corris and Rod had a challenge.
- a handgunner who would not shoot if the buff was beyond 50 m
- a cartridge they didn`t know nothing about
- a guy who have not shot any larger animals than zebra, oryx and blue wildebeest

My first buffalo
The days past quickly, and several stalks was not successful – for a handgunner.
We could not come close enough – but we were thaaaat close to good buffs.

I don`t know how many times I could hear comments like: “If you have had a rifle....!”

The seventh day – we observed two “dagabulls” (bulls which is 10-15 years of age).
Both bulls had a good boss – but the length of the horns was not so big.

But there was “no room” for being too selective.
My “target” for the travel was a buff – not Africa`s biggest trophy.

The area was very, very dry – because the last rain was 5 months ago.
The ground was like crispbread – and that didn't do it easier for our stalks. 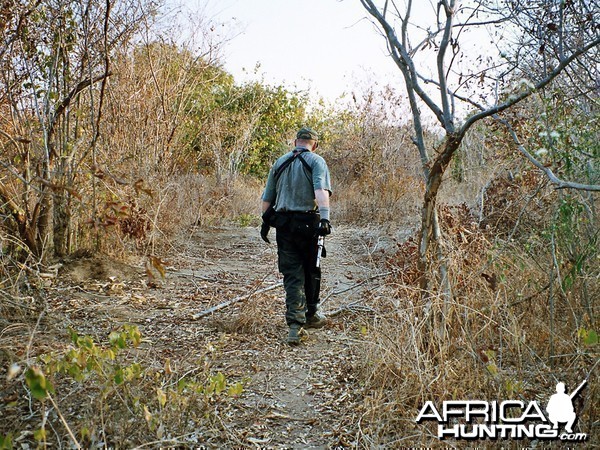 How should we do this?

We found a river bed – and we walked carefully against the bulls.
The bulls was right to us – and the wind blew in their direction.
But we did not have any other possibility – to come close to them.

“I think we wait for them here” – Corris said.
“Schhhhh! There they are!”

Ohh – shit!
They stopped – and we were sure that they have smelled us.

They stood still for minutes – and those minutes was like days, but suddenly one of the bulls started to walk – and the second bull followed.

35 m away from us – Corris whistled, and the bulls stopped.

Docter's red dot – was placed on the buff`s shoulder within 2 seconds – and pang!
We could see that the bull lifted his left foot – and was hit.
Both bulls start running – and the “trees passed fast”.

The red point followed the bull – and pang – the second shot hit 10 cm from the first one.

The third bullet stopped in a tree.

At 50 meters – I could only see his back leg before he disappeared.
Pang.

Then we waited for some minutes – and suddenly we heard the bulls' dead roaming.

Corris turned around, took my hand and said: “Congratulation! You have got your first buffalo”!

Carefully I walked to where the roaming came from – and could see the bull lying on the ground.

Still carefully - I went to the left for him - so I could go up to him from behind.
Then I shot him in the spine.
Just to be sure that I could write about this! 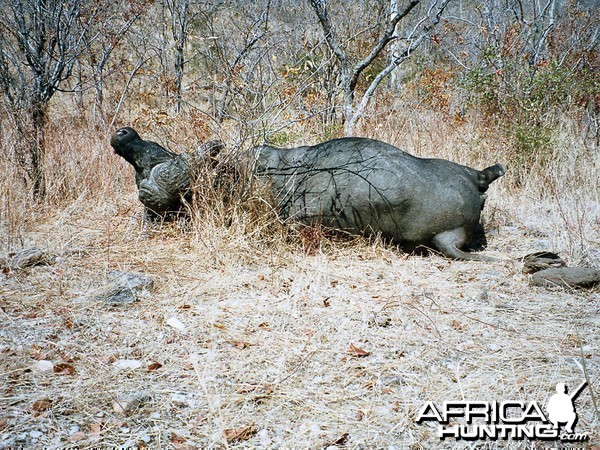 One shot hit the shoulder, and the tracker found the bullet in the chest when he was skinning it. 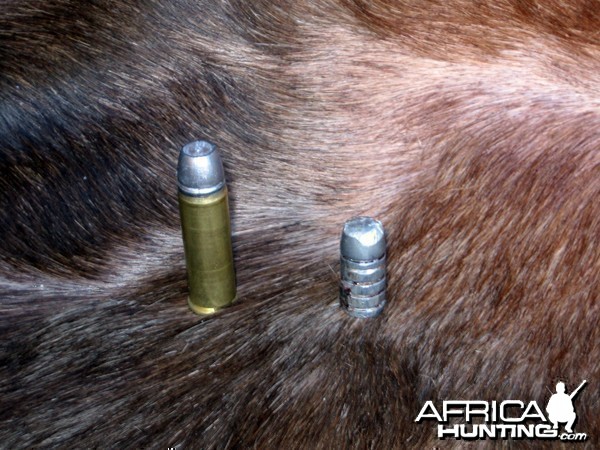 The second shot hit the heart and penetrated through the body.
The third – was as mentioned – in a tree.

The fourth hit the back leg – but was not found (the trackers is not so “busy” about finding bullets).

The bullets retention weight was 364 gram.

It will not be the same thing to hunt “small game” after this! 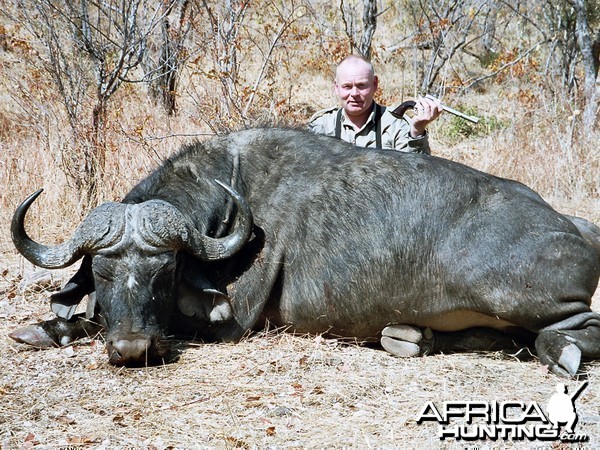 The bull ran 62 meters after the first shot! 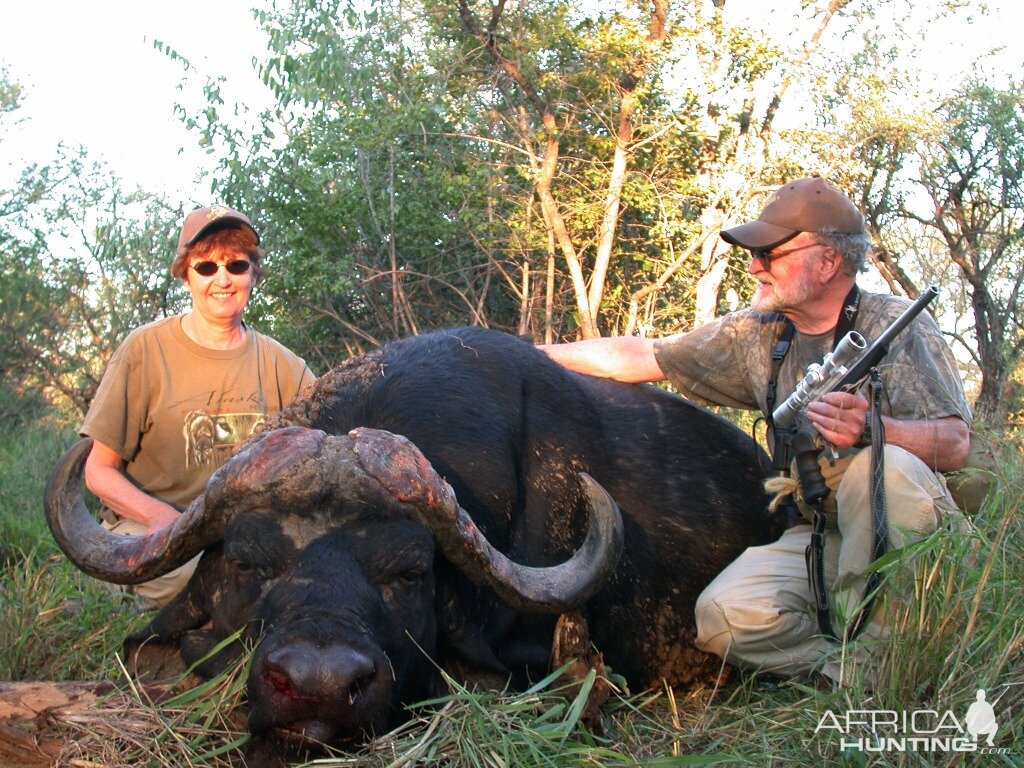 Sverre. Well done. You thought about what you needed, prepared, had faith in your abilities and got the job done. With a handgun it is always about stalking to get close to your quarry, being careful about wind, noise and placing the shot just right. It what hunting is all about. Congratulations.
R

Congratulations, great story and thanks for sharing it, I love my contender in 30-30 for hunting deer

If you understand the limitations of the caliber and stay within them...it is possible.
Being patient, and having a good PH to get you close is a big help as well.
Congrats to you both.
“They that can give up essential liberty to obtain a little temporary safety deserve neither liberty nor safety.” Benjamin Franklin 1759

with the handgun its get as close as you can and then,10 yards closer.i know,old hat but true.my longest shot with a handgun was a cow elk at 351 yards with a range finder,scope sighted encore in 308 cal.180 gr nosler.it can be done.
You must log in or register to reply here.
Share:
Facebook Twitter Reddit Pinterest Tumblr WhatsApp Email Link