Got our trophies from last years hunt in Zimbabwe

The long journey our trophies took ended today when I made the trip to BWI airport, cleared them and hauled them home. It all started last July when my son and I hunted with SSG Safaris and each took a buff, I also took a nyala and my daughter decided she needed an impala. Our trophies were shipped off to Trophy Consultants Int. in Bulawayo. There the buff hides were tanned and we had gun bags, belts, and a wallet made from the leather ( they turned out great). The rest was a dip and crate affair. We were kept informed every step of the way, from there our shipment went to Maple Freight also in Bulawayo, for shipping to Joberg once all the documentation was complete. Again we were kept informed of what was going on and when. Once our shipment reached Joberg it was handled by Spherical Freight Services. Once again we were kept abreast of what was going on and were given a shipping date of 6/1/14 to arrive in Atlanta on 6/2/14 and from there forwarded to BWI in Baltimore. They were shipped on 6/1 as promised and arrived in Atlanta early on 6/2, that's where the fun started. I began tracking the shipment immediately and saw no movement, so I called the Delta Cargo resolution team (a great group of people) and was informed that the regular customs agent took a vacation day the day my crate arrived and it was inspected by another agent who cleared it and put it in the wrong location for forwarding. I was assured that it would be placed on the first available flight the following morning. I tracked it the following day and saw no movement again. So I called the resolution team again and could hardly believe what they were telling me. It seems that when they went to pick up my crate they were told they couldn't move it because the accompanying paperwork had been misplaced. Disheartened but far from defeated I emailed the shipper right away to inform them of the goings on, to see if they could help, and turned in for the night. the following morning I received an email from Delta informing me of a flight number that my crate was scheduled to depart on. I tracked it and saw that it landed at BWI at 9:30 that morning, at 10:30 I received an email informing me that it was in the warehouse and ready for pick up. This was now Fri. 6/6 so anxious to pick it up I called USFWS in Baltimore to start the paper work, and was informed by the only inspector working there that day that she was closing the office at noon. Wow some times you just have to know when to give up and admit that you are beat, so I gave up on the idea of seeing my shipment until Monday. She said that she would let a note for the inspector that would be on duty Monday and he would get the paper work started. I could not believe it when my phone rang Monday morning at 7:36 and it was the inspector telling me that he completed all of my papers and that all I needed to do was sign them, take them to Customs, pay them $9.00 get them stamped and go to the warehouse and pick up my shipment. It seemed too easy but that is exactly how it unfolded. In less then 3 1/2 hrs. I drove 50 mi. signed papers, got them stamped, took them to the warehouse paid them $50 loaded the crate into my truck and drove home. What a trip, it was frustrating at times but left me with a great feeling of satisfaction when the journey was complete. 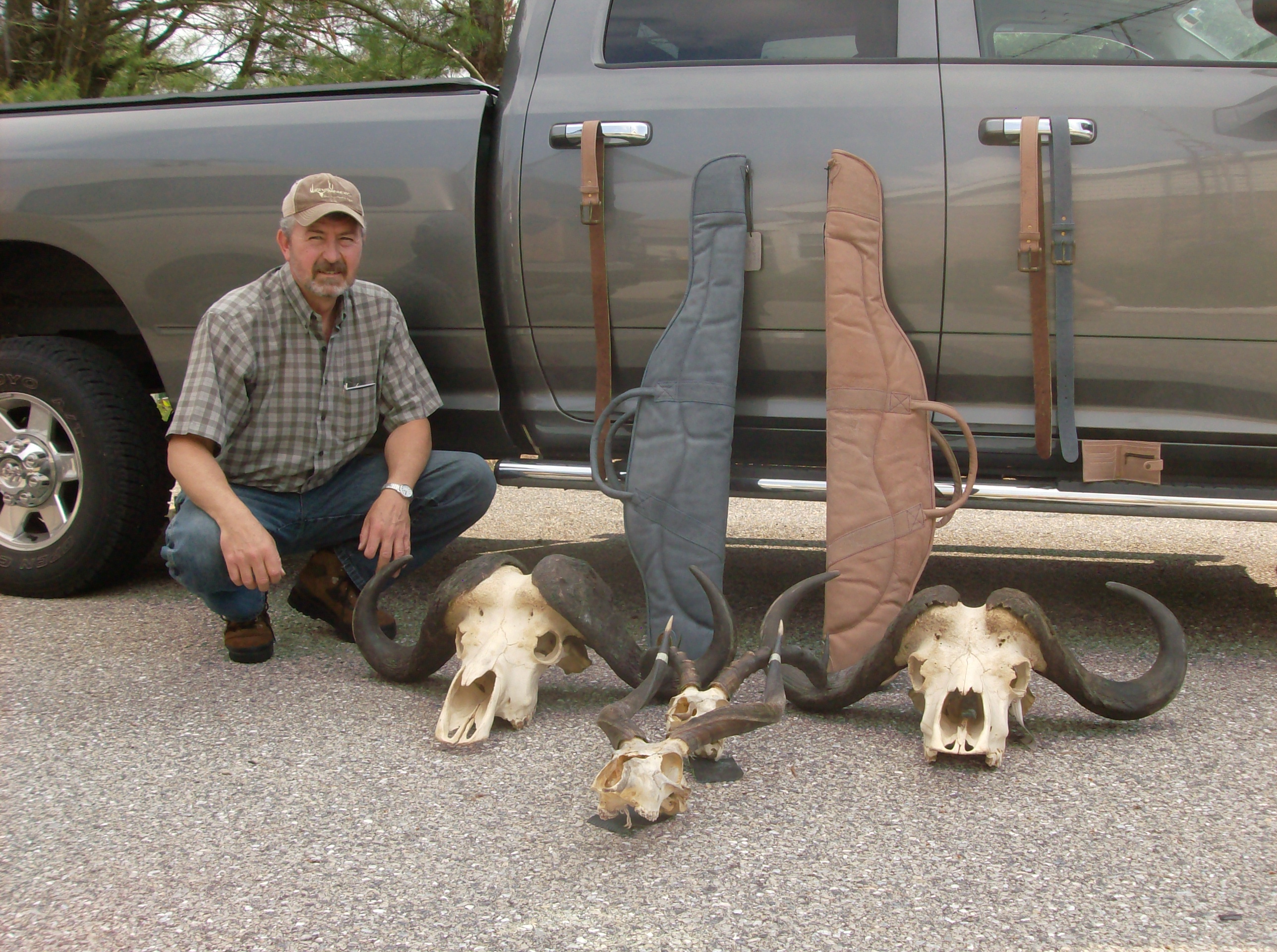 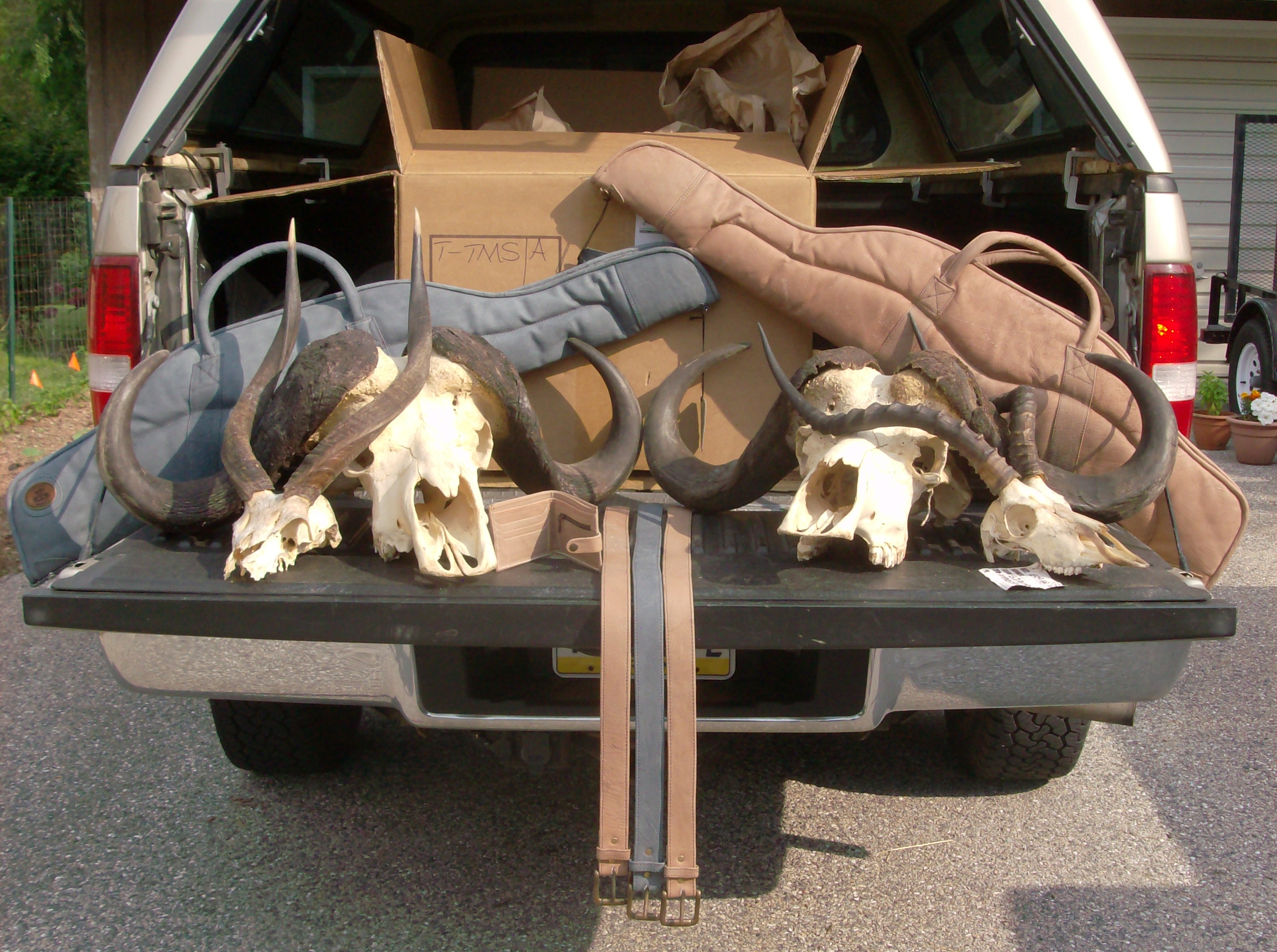 Nice! Those gun cases will become family treasures, for sure!
Captain of the Luddite Society
https://www.africahunting.com/threads/zimbabwe-hunting-the-bvc-in-zimbabwe-for-buffalo-john-sharp-safaris-exceeding-expectations.53046/

Thanks tarbe we are very happy with them the quality is excellent and the price could not be beat.

Glad it all made it home safe and sound.

Thanks for sharing the pictures of your trophies.

i also had a rifle case made while there... never thought about the belts.

good stuff jd
really like them gun bags,mate .
them skulls will look plenty cool on the wall
THE HUNTER; The person that pays over 90% of the cost for the presavation and maintance of wildlife and gets zero credit for it ................

bluey said:
good stuff jd
really like them gun bags,mate .
them skulls will look plenty cool on the wall
Click to expand...

thanks bluey, the impala will be a shoulder mount and the nyala I'm up in the air about I had it caped out for a full body mount but don't know where in the house I would put it.

Trophies are Home and at the Taxidermist