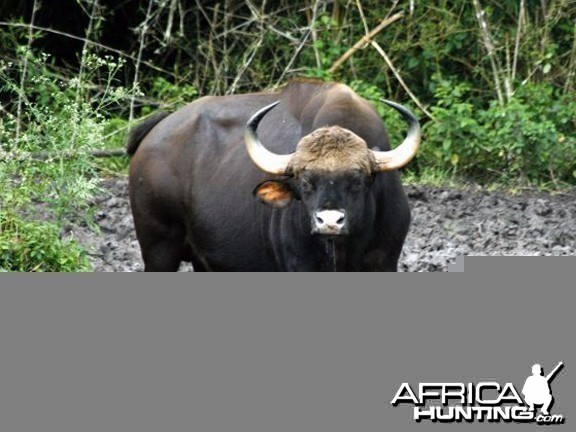 The GAUR (Bos gaurus, previously Bibos gauris) is a large, dark-coated forest animal of South Asia and Southeast Asia. The largest populations are found today in India. The gaur belongs to the Bovinae subfamily, which also includes bison, domestic cattle, yak and water buffalo. The gaur is the largest species of wild cattle, bigger than the African buffalo, the extinct Aurochs (the ancestor of domestic cattle), wild water buffalo or bison. It is also called seladang or, in the context of safari tourism, Indian bison. The domesticated form of the gaur is called gayal or mithun. 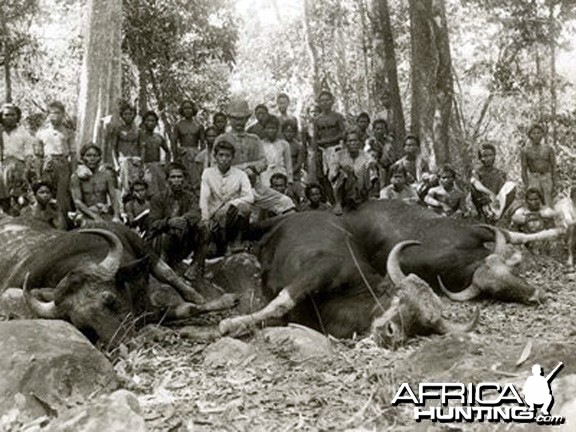 Gaur are said to look like water buffalo at the front and domestic cattle at the back. They are the heaviest and most powerful of all wild cattle, and are among the largest living land animals; only elephants, rhinos, and hippos grow larger. Males have a highly muscular body, with a distinctive dorsal ridge and a large dewlap, forming a very powerful appearance. Females are substantially smaller, and their dorsal ridges and dewlaps are less developed. The dark brown coat is short and dense. There is a dewlap under the chin which extends between the front legs. There is a shoulder hump, especially pronounced in adult males. 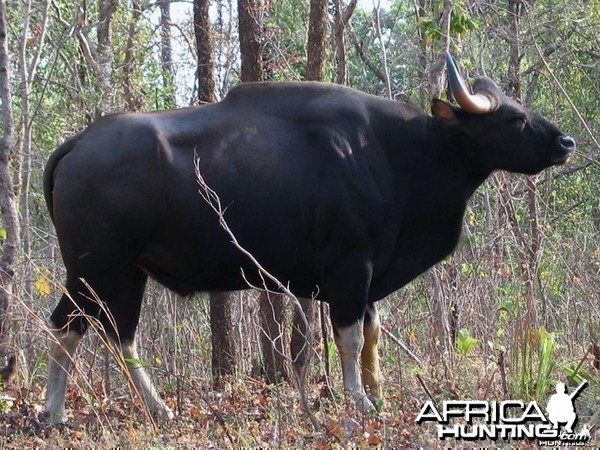 The gaur has a high convex ridge on the forehead between the horns, which bends forward, causing a deep hollow in the profile of the upper part of the head. There is a prominent ridge on the back. The ears are very large, the tail only just reaches the hocks, and in old bulls the hair becomes very thin on the back.

In colour the adult male gaur is dark brown, approaching black in very old individuals; the upper part of the head, from above the eyes to the nape of the neck, is, however, ashy gray, or occasionally dirty white; the muzzle is pale coloured, and the lower part of the legs are pure white or tan. The cows and young bulls are paler, and in some instances have a rufous tinge, which is most marked in individuals inhabiting dry and open districts.

The horns are found in both sexes, and grow from the sides of the head, curving upwards. They are regularly curved throughout their length, and are bent inward and slightly backward at their tips. The colour of the horns is some shade of pale green or yellow throughout the greater part of their length, but the tips are black. They grow to a length of 32 - 80 centimetres (13 - 31 in). A bulging grey-tan ridge connects the horns on the forehead. The horns are flattened to a greater or less degree from front to back, more especially at their bases, where they present an elliptical cross-section; this characteristic being more strongly marked in the bulls than in the cows.

The tail is shorter than in the typical oxen, reaching only to the hocks. The animals have a distinct ridge running from the shoulders to the middle of the back; the shoulders may be as much as 12 centimetres (5 in) higher than the rump. This ridge is caused by the great length of the spines of the vertebrae of the fore-part of the trunk as compared with those of the loins. The hair is short, fine and glossy, and the hoofs are narrow and point. 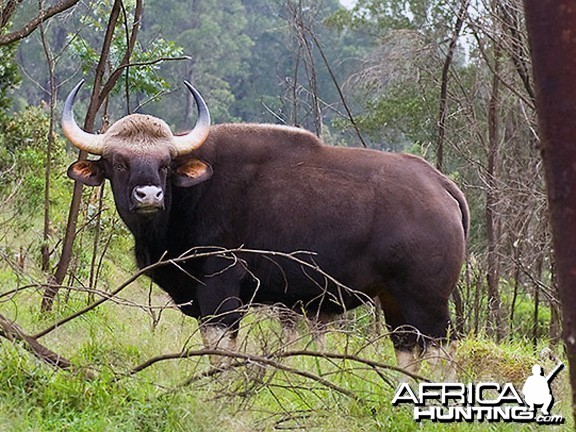 Gaur have one calf (or occasionally two) after a gestation period of about 275 days (about nine months: a few days less than domestic cattle). Calves are typically weaned after seven to twelve months. Sexual maturity occurs in the gaur's second or third year. Breeding takes place year-round, but typically peaks between December and June. The lifespan of a gaur in captivity is up to thirty year

Wild gaur feed mainly on grasses, herbs, shrubs and trees, with high preference for leaves. In Goa, finer and fresh grass was preferred to coarse grasses, though Strobilanthes species ixiocephalus and callosus were the most preferred food. Gaur spent 63% of their daily time feeding. Peak feeding activity was observed in the morning between 6:30 to 8:30 am and in the evening between 5:30 to 6:45 pm. During the hottest hours of the day between 1:30 to 3:30 pm, they rest in the shade of big trees.

Gaur graze and browse on a wider variety of plants than any other ungulate species of India, with a preference for the upper portions of plants, such as leaf blades, stems, seeds and flowers of grass species. Food preference varies by season, with more grass and herb species consumed in monsoon than tree species. In winter no food type is dominant, but In summer more tree species are eaten than grasses and shrubs. 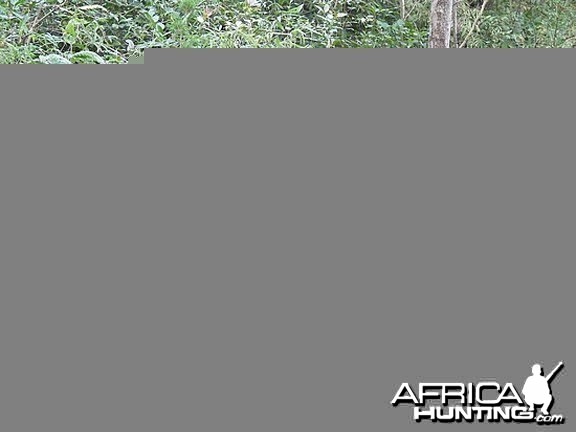 Gaur consume the bark of Teak (Tectona grandis) and Cashew (Anacardium occidentale) in the summer season, perhaps due to an insufficiency of green grass in summer. Gaur are also known to feed on the bark of other tree species including Adina cordifolia, Holarrhena antidysentrica and Wendlandia natoniana. Gaur may debark due to shortage of preferred food, a shortage of minerals and trace elements needed for their nutrition, or for maintaining an optimum fiber/protein ratio for proper digestion of food and better assimilation of nutrients. Gaur may turn to available browse species and fibrous teak bark in summer as green grass and herbaceous resources dry up. High concentrations of calcium (22400 ppm) and phosphorus (400 ppm) have been reported in teak bark, so consumption of teak bark may help animals to satisfy both mineral and food needs.

Long-term survival and conservation of these herbivores depends on the availability of preferred plant species for food. Hence, protection of the historically preferred habitats utilized by gaur is a significant factor in conservation biology.
Ecology and behaviour.

In January and February, gaur live in small herds of 8 to 11 individuals, one of which is a bull. In April or May more bulls may join the herd for mating and individual bulls may move from herd to herd, each mating with many cows. In May or June they leave the herd and may form herds of bulls only or live alone. Herds wander 2 - 5 kilometres (1.2 - 3.1 mi) each day. Each herd has a non-exclusive home range and sometimes herds may join together in groups up to 50 or more. The average population density is about 0.6 animals per square kilometre (1.5 animals per square mile), with herds having home ranges of around 80 square kilometres (31 sq mi).

Where gaur have not been disturbed, they are basically diurnal. But where populations have been disturbed by human populations, gaur have become largely nocturnal, rarely seen in the open after eight in the morning. During the dry season, herds congregate and remain in small areas, dispersing into the hills with the arrival of the monsoon. While gaur depend on water for drinking, they do not seem to bathe or wallow. 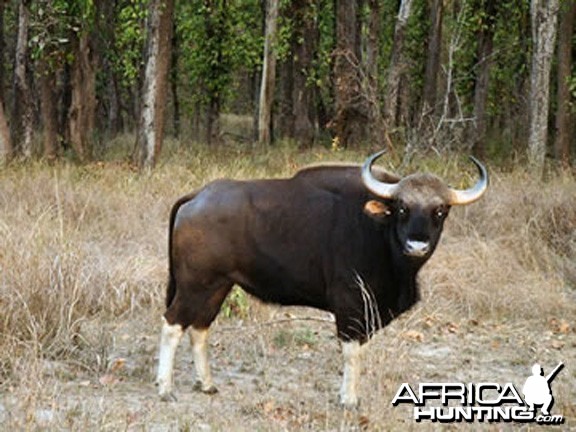 Due to their formidable size and power, the gaur has few natural enemies. Saltwater Crocodiles, leopards, and dhole( Indian wild dogs) packs occasionally attack unguarded calves or unhealthy animals, but only the tiger has been reported to kill a full-grown adult. On the other hand, there are several cases of tigers being killed by gaur. In one instance, a tiger was repeatedly gored and trampled to death by a gaur during a prolonged battle. In another case, a large male tiger carcass was found beside a small broken tree in Nagarahole national park, being fatally struck against the tree by a large bull gaur a few days earlier. When confronted by a tiger, the adult members of a gaur herd often form a circle surrounding the vulnerable young and calves, shielding them from the big cat. In Nagarahole, upon sensing a stalking tiger, a herd of gaur walked as a menacing phalanx towards it, forcing the tiger to retreat and abandon the hunt. Gaur are not as aggressive toward humans as Wild Asian Water Buffaloes. 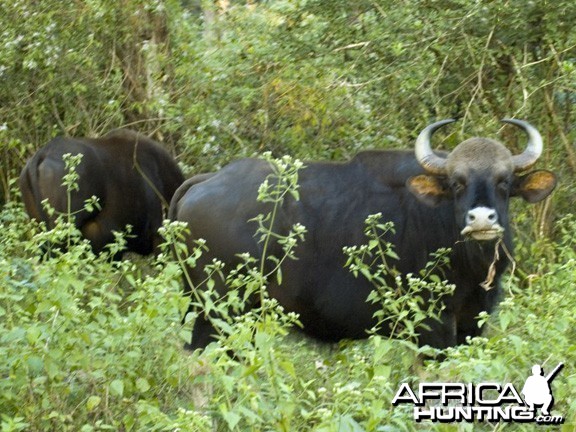 Gaur herds are led by an old adult female (the matriarch). Adult males may be solitary. During the peak of the breeding season, unattached males wander widely in search of receptive females. No serious fighting between males has been recorded, with size being the major factor in determining dominance. Males make a mating call of clear, resonant tones which may carry for more than 1.6 kilometres (1.0 mi). Gaur have also been known to make a whistling snort as an alarm call, and a low, cow-like moo!!!! In some regions in India where human disturbance is minor, the gaur is very timid and shy. When alarmed, gaur crash into the jungle at a surprising speed. However, in South India, where they are used to the presence of humans, gaur are said by locals to be very bold and aggressive. They are frequently known to go down fields and graze alongside domestic cattle, sometimes killing them in fights. Gaur bulls may charge unprovoked, especially during summer time when the heat and parasitic insects make them more short-tempered than usual. To warn other members of its herd of approaching danger, the gaur lets out a high whistle for help.

Gaur was very sort after animal by hunters for its massive head and horns, and lots were shot during the British rule & by the Maharajas, the population had decimated to a very low numbers, and it seems that since the complete ban on hunting in India, the Gaur is thriving for its better future. 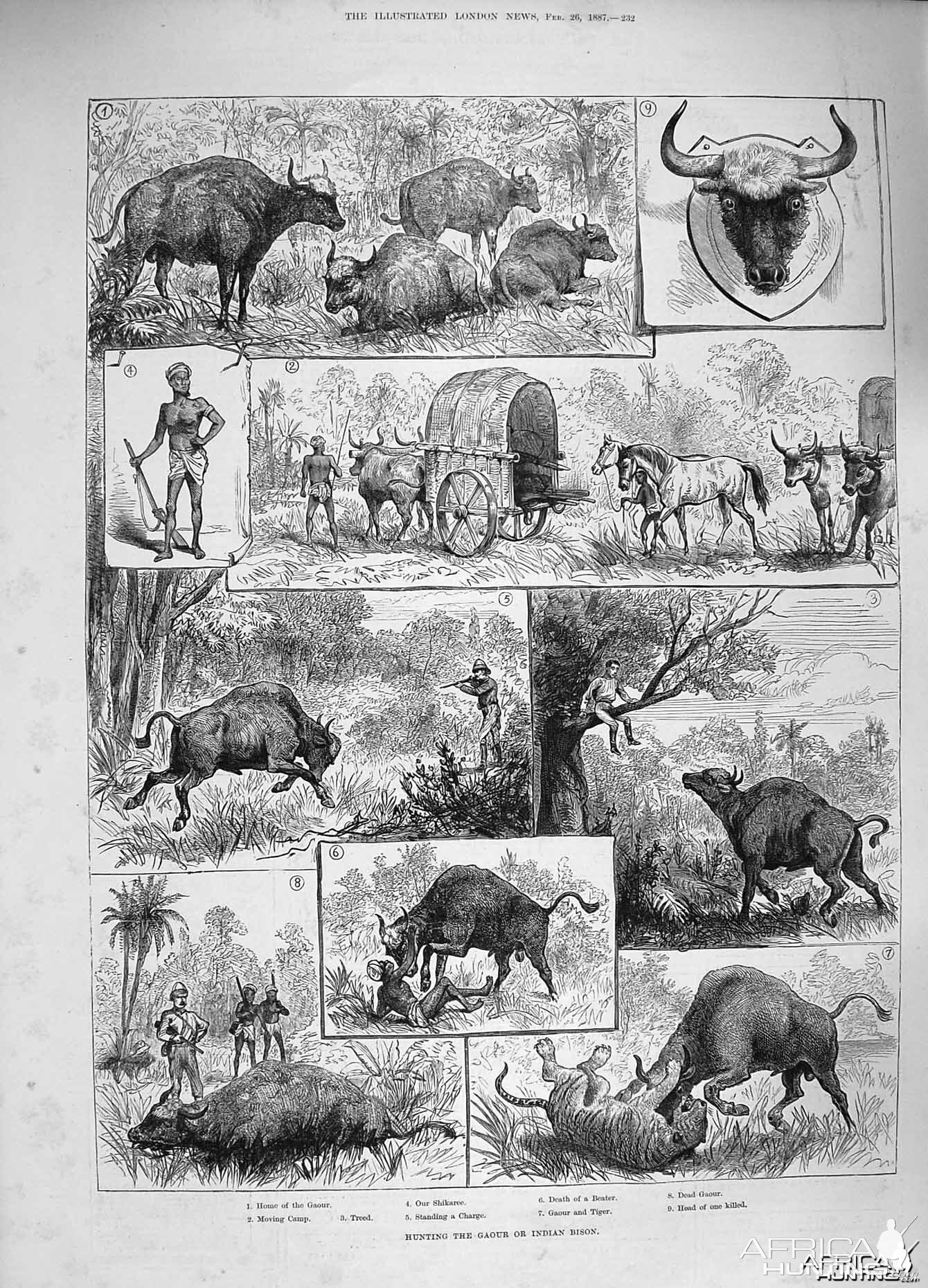 What a beast! Amazing!
Africa on my mind.

One big animal. Would be interesting to hunt. Too bad India has no hunting.
Bruce

The Gaur/Seladang is right at the top of my most wanted list, one of the reasons I hunted Bantang his smaller cousin, also a great animal to hunt but not a patch on the great Gaur I think !

Im sure there could be limited hunting in Indian if there was a will & it would only help animal numbers in the long run ?
M

What I undersand, in India, problem animal control is strictly done by govt authorities,and any hunting by civilians is absolutely banned.
You will need to check options in other Asian countries in gaur native range, or gaur ranch hunting, perhaps in Texas, or south Africa. (once it was advertised in those countries, thus the suggestion)
You must log in or register to reply here.

The Art Of Hunting The Mighty Gaur : A Comprehensive Guide
2 3 4

The Resilience Of A Gaur
2 3

The Gaur Which Ended A Shikar Career
2 3