I came to the conclusion to use this particular ammo after a lot of research and after talking with Randy Garrett while I was making my decision on what to carry. I scouted and hunted for Mule Deer and Elk in a Grizzly use area south of Yellowstone National Park, Wyoming. I was considering the .44 Magnum and the .454 Casual and Mr. Garrett after talking with me recommended I go with the .44 Magnum as his 330 grain "hammerehead" ammo came quite near the power of the .454 Casual but was more controllable for those such as myself who did not have a lot of experience shooting heavy recoiling handguns. I found his advise very useful and bought a Ruger Redhawk 6". Later own I traded the Redhawk in for a Super Redhawk 7 and one half inch barrel. I personally have found the .44 magnum a more controllable handgun for me; validating Mr. Garretts advice.

Garrett's 44 Mag plus p Hammerhead Ammo is the ammo I carried (the ten years I lived in Wyoming) and carry in my Ruger Super RedHawk when I am in Grizzly country. 330-gr SuperHardCast Long Hammerhead at 1400-fps from 7.5” barrel. More information here> http://www.garrettcartridges.com/44hammerheadplusp.html

There is an article, Defensive Shooting Of Bears With The Revolver, worth reading for those who may wish to carry a handgun for such purposes. http://www.garrettcartridges.com/defensive.html
Last edited: Dec 8, 2016

@edward may want to comment here. The heavy recoil handguns are too much for me. My son has the S&W 500 (above) and that thing just hurts to shoot. For me the Taurus Judge in 45 Colt is about all I can fire and be even close to what I am aiming for. Never fired a 44 mag so I wonder about the felt recoil in that rascal. 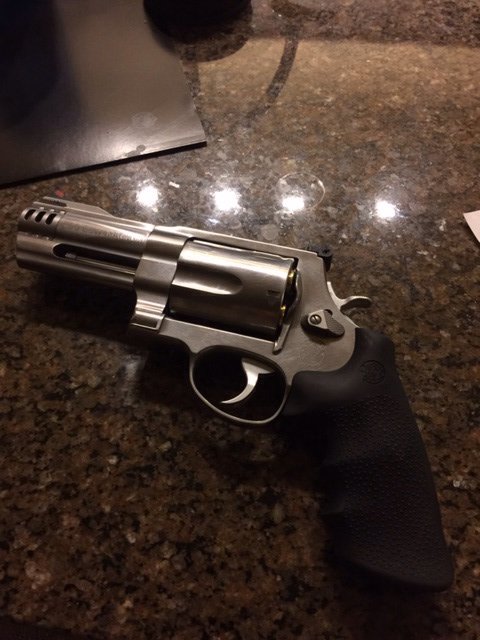 The 44mag is all the handgun I ever want.. with full power loads its not painful to shoot.. but its not pleasant either..

The only "hunting" handgun I own (TC Contender) is also a .44mag... Never saw a reason to step up to anything bigger.. although the only things I have ever hunted with it are hogs and deer.. Im sure if I were going to the woods to intentionally chase something that could chase me back.. or something that is a lot larger in size than your typical whitetail, I'd start thinking about finding a rifle barrel for the contender, or a larger, more powerful handgun cartridge..

with proper bullets,and placement,the 44 mag will take any animal on the planet,how ever i prefer something a little bigger.how ever ive been shooting and hunting with handguns all my life.at 78 now i feel recoil more than i used to.the point is if you cant control your gun you cant hit what your aiming at,so all the power in the world isnt going to do you any good so you will always be better off with a handgun that you are comfortable with.the same applies to any firearm.if your afraid to shoot it then its no better than a club.

Respect to all you "really" big bore handgunners! It takes a lot of dedication to master the big bores like the .454 Casual, the .500 S&W and others. I have as "Dirty Harry" so eloquently put it recognized "my" limitations. Now there are limitations to the proper applications of all hard cast lead large meplat bullets much more than can be gone into here but the information is out there for all.

I'm a babe in the woods (turning 67 this Dec. 23) on this subject compared to many and look forward to hearing from those with much more field experience than me. Of course I feel blessed to never have needed to defend life and limb with my .44 mag. as it is NOT what I would choose as a first line of defense weapon but rather as a last ditch effort.

The below is my Ruger Super Redhawk .44 Mag

bullets that i use for penetration are the heavy cor-bon penetrators and the punch bullets.

I dont think Ive ever bought anything special to feed my .44's.. just whatever inexpensive 240 gr soft point I could find at the time I needed more ammo..

I grabbed a couple of 50 round boxes of 240 gr herters select grade SP's at Cabelas the last time they were on sale.. I think I paid $29 a box for them?

Havent had any problem dropping pigs with them at all.. Havent had a chance to test them on white tail yet..

If I were hunting something tougher or something meaner.. I'd probably re-think my ammo choice...

edward said:
bullets that i use for penetration are the heavy cor-bon penetrators and the punch bullets.
Click to expand...

I have read a lot of positive things about "punch" bullets having awesome penetration properties but I have never seen anything about them actually being used on big or dangerous game. I would like to see some though. What has been your experience with them? 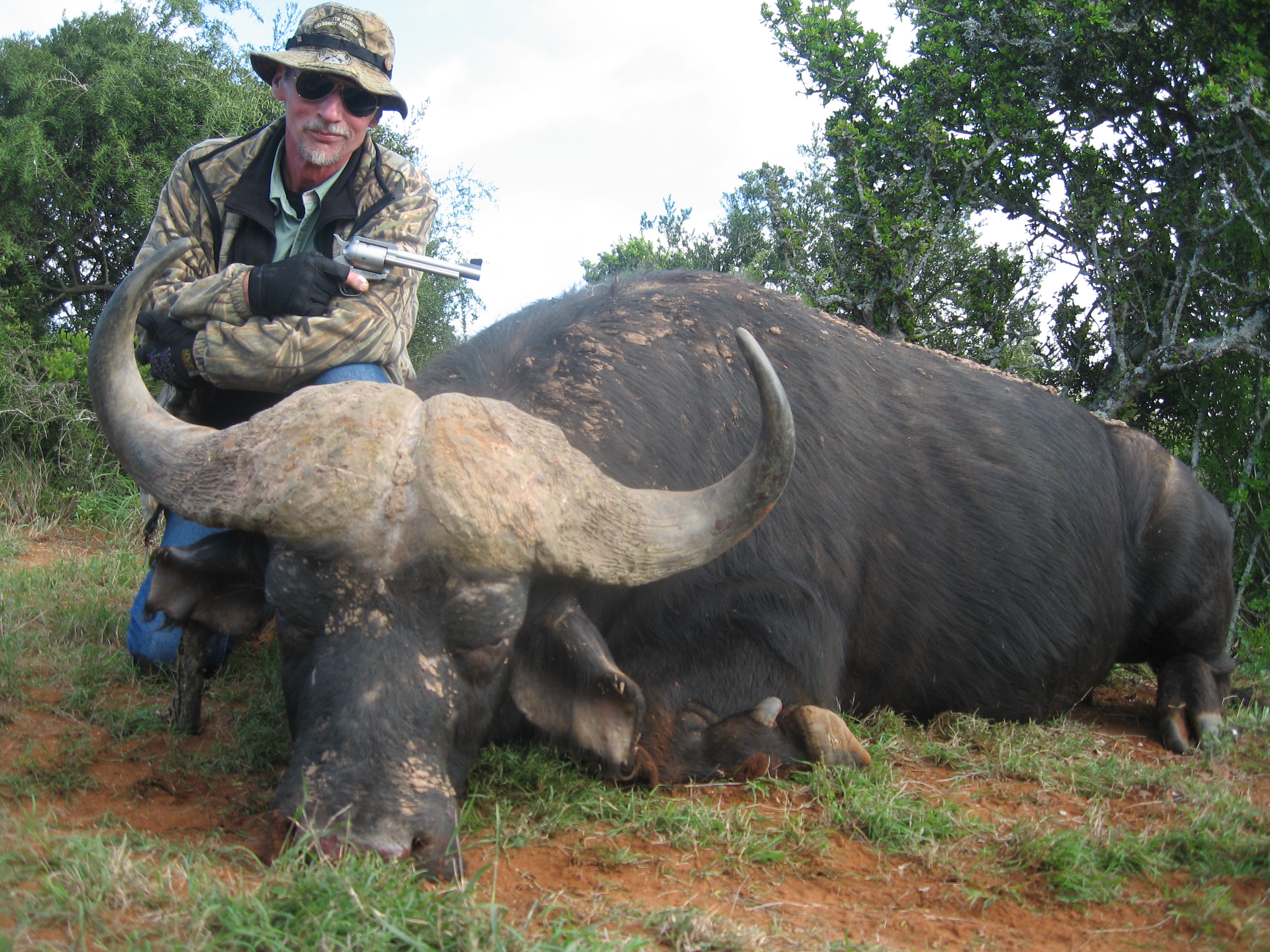 when i hunt with a straight wall cartridge the punch and cor-bon penetrator are my go to bullets.most of my hunting is with scope sighted single shot handguns though and then i prefer a well constructed jacketed bullet or in my 9.3x74r i like the woodliegh hydro solid.ive taken a few bison,one cape buffalo,one bull elephant and a brown bear in alaska with the punch and cor-bon bullets.they hold together and go straight through,they kill dead.quickly. 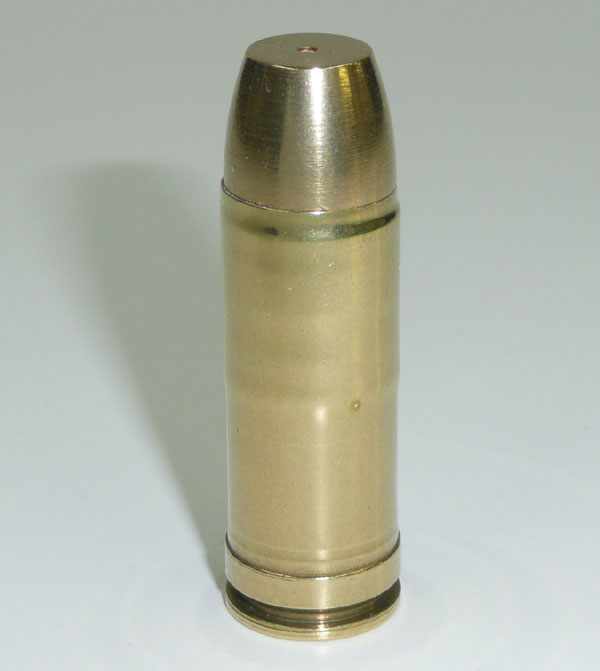 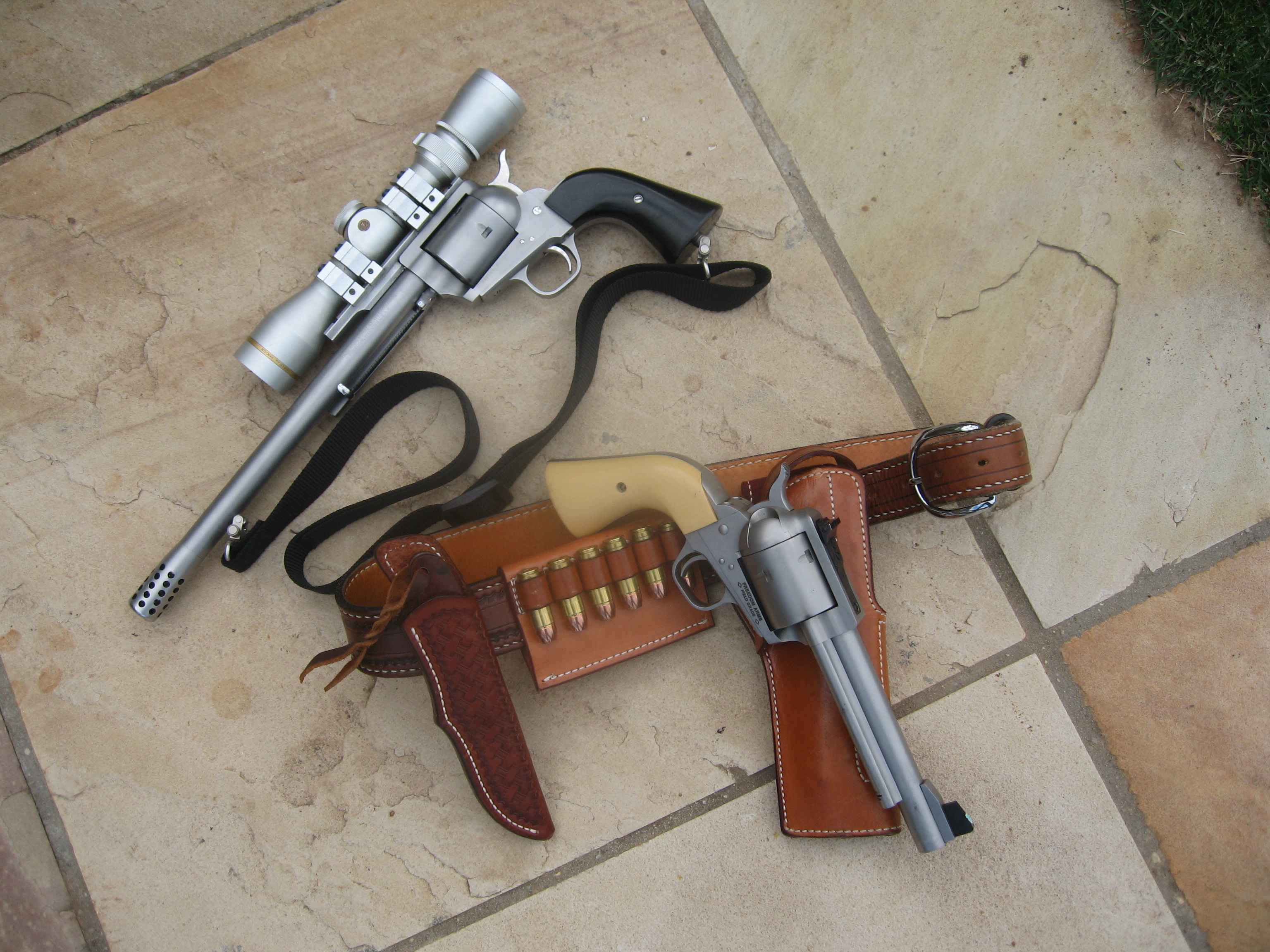 The loaded cartridge is the 500WE w/420gr Punch as made by Grizzly Ammo while below are the two Freedom Arm`s model 83`s I carried. The scoped 10" barreled 475 Linebaugh carried a handload using 390gr Punch bullets over 296 for anything over 50yds while the 6" open sight 500 Wyoming Express used the Grizzly factory 420gr Punch ammo for under 50yds. The loaded cartridge is the 500WE w/420gr Punch...... I used factory Hornady 475 Linebaugh ammunition with the 400gr XTP to take five other animals.........
I have more guns then I need but not as many as I want......

I believe Edward finished his elephant with a Punch bullet, from his 454, that was through the head and never recovered..... About the best bullet for penetration from a handgun that was ever made.......
I have more guns then I need but not as many as I want......

Could you post more information on the punch bullet loads?

I found this article on punch bullets I thought others might like to see:
Grizzly Cartridge Company Factory-loaded Punch Bullet Ammunition> http://www.gunblast.com/Grizzly-Punch.htm

as i dont hand load i get all my punch bullet ammo from mike at grizzly cartridge co.
R

I've wondered about loading bullets 300 gr & heavier in the 44 mag, but the only two available to me are a Model 29-2 6" and a super Blackhawk 7.5". I suppose the Ruger would handle the heavy loads, not sure about the Smith.

Ray B said:
I've wondered about loading bullets 300 gr & heavier in the 44 mag, but the only two available to me are a Model 29-2 6" and a super Blackhawk 7.5". I suppose the Ruger would handle the heavy loads, not sure about the Smith.
Click to expand...

My revolver, specifically for carry while fly fishing here in the land of many bears, is a 4" Model 629, S&W.
It's always ready with Federal 300 grain "Cast Core" factory loaded ammunition.
Why Federal named it such, I've no idea, since it has no separate "core".
This bullet is simply a very hard cast metal alloy "monolith".
It is a "solid", in every sense of the word, with flat nose shape.
It fits well in standard revolvers and recoil, although quite stout, is not rediculous (even old folks like me can shoot it well).

If I could predict when a grumpy bear was going to rush me in anger, I definitely would prefer a large bore rifle, such as the .416 Rigby for one example.
However, carrying a large rifle, while stream fishing is not practical.
Therefore, I carry my .44 handgun and fortunately so far, I have not had to shoot a bear with it.
When salmon are present, such encounters are however not rare in bush Alaska.
And, during such times that I have bumped into a bear, my .44 at least provided some measure of security, (better than only fly rod and pocket knife.)

It is comforting to know this ammunition has been used successfully by others, on very large animals, and it reportedly penetrates very well.

Don't forget the large economy size can of "Bear Spray" for your belt as it has been shown to often work better than a gun (https://www.outsideonline.com/1899301/shoot-or-spray-best-way-stop-charging-bear) and save that "hand cannon" for last resort.

For everyone who live in, travels through, or plans to hunt in Bear Country; do yourself a great favor and read ALL of James Gary Shelton's books on Bear Behavior, Bear Attacks: the Truth, Myth & Reality about them and his "Bear Encounter Survival Guide". I had the great pleasure of talking with Gary after the tragic death of my friend from bear attack talked with him on this subject. I found I am much more in agreement with him than with other authors such as Stephen Herrero.

Gary Shelton understands bear behavior and human behavior. He understands how humans lack of knowledge, understanding, and preparation for their existence in "Bear Country" contributes to conflict but takes the stance that Human Live is still more important than a "Bear Life" in a life and death struggle. Humanity can make and pass laws to limit man vs Bear conflict. Men must follow safety laws while in "bear country" so as not to attract bears and invite an attack. For there is a balance to be struck. Bears will be bears and it is up to men to understand what that means and live with and around that.

I grew up around Black bears and tracked a Black brea to its den in southern Arkansas while I was very young when almost all the native Black bears had been thought to have been shot out. I brought my grandfather out who always took me hunting and showed him the tracks and the den. I made him swear a blood oath to me not to talk about it to another living person because I did not want anyone hurting it. The Black bears in the south of Arkansas were the last of the native bears of Arkansas. Later Arkansas reintroduced Black bears from Minnesota and Manitoba,. Canada into the Ouachita and Ozark mountains. Many people do not know that Black bears were once so numerous in Arkansas that it was know as "the Bear State". Bears are one of God's great creations and beautiful to watch yet you have to respect them as even the smaller Black bear are capable of growing to great size, strength, and at time ferocity. While 99 out of 100 Black bears will run at the site, sound, or smell of a human beware of that 100th Black Bear. More humans are killed by Black bears than by Grizzly and Brown Bears combined and unlike attacks by a Grizzly or Brown Bear. Now with the exception of a sow protecting her cubs, if a Black bear attacks a human it is usually a PREDATORY ATTACK (the bear means to kill and eat you). If you try playing dead during a predatory attack you will not be playing for long. During such an attack, if you want to live you have to fight for your life. To understand how and how to recognize such an attack I suggest you get James Gary Shelton's books, read them over and over, highlight them, and make them second nature!