what is your opinion on the future of international hunting with the biden, harris,team?

I don't think it will be so much the future of international hunting, as it will be a possible ban on all trophy importation.

The lefts intention is to go after the guns , and chip away at the edges of anything associated with guns.
C

I would be surprised if there is any noticeable change. They have way bigger fish to fry for the next four years.

The anti green dogs will be nipping at their heels with their lobbyists.

I think the future of international hunting may have to do more to the lack of hunters than what the politicians do. If you look at the age of the hunters on this forum you'll see were not getting younger.

Brent in Az said:
I don't think it will be so much the future of international hunting, as it will be a possible ban on all trophy importation.

The lefts intention is to go after the guns , and chip away at the edges of anything associated
Click to expand...

Perhaps this will reset the industry where the focus would be on hunting !
The success of the trip should not be judged on the size of the trophy but rather whether the client had a pleasurable time . Clients would come and hunt good representative specimens forgo the trophy. Outfitters will need to adjust their value proposition from trophy hunting to “the Safari experience “....
Is the recent natural death of Mr Wow the world record Kudu an omen?

lwaters said:
I think the future of international hunting may have to do more to the lack of hunters than what the politicians do. If you look at the age of the hunters on this forum you'll see were not getting younger.
Click to expand...

IMO that has a lot to do with the manipulation of the media in not supporting/advocating for sport hunting or target shooting. Yet it's quite ok and proper for society to tacitly condone your local abbatoir by enjoying the convenience of buying cellophane portions of meat and fish at your local supermarket, and keep clearing ever more land (destroying native habitats and displacing wild species) for ever more dumb SJWs and vegans!!

If we can’t import to hunt, I’ll just bring back photos. I’m pretty much out of space anyway particularly once I finally receive my 2019 trophies. JMO
Africa on my mind.

I don’t see international hunting as a focus of the next administration. I anticipate no change.

I don’t anticipate any change, but I don’t think the negative trend will stop unfortunately. There are bigger things to focus on. If it didn’t pass in California this year, it won’t pass nation wide.
Trump was good for gun rights, but he did hunting no favors calling it a horror show even though his sons hunt.
H

I don't see the lack of hunters being the problem some imagine it to be. In Australia, hunter numbers went into decline for a while, but that has changed significantly over the last few years. If I went to the range back then I would look around and see only grey and balding heads. Many clubs were on their last legs as the membership passed away. Today however, the ranges are full. In particular large numbers of younger shooters and families. Shooter licences, hunting licences are at record levels. So too is the number of hunters who keen to try the safari experience and global hunting. I think what happened is that the post Vietnam generation were brainwashed against guns and hunting and numbers decreased. However a new generation has grown up and rejected that. They have found shooting and hunting to be fun and are taking it up wholeheartedly. Of course if you watch TV, then you wouldn't see this. All the media types are still adherents to the old anti hunting propaganda. But really, who takes notice of anything they say? All in all I think the future is looking better than it has for decades.

As to the risk of the new US Administration taking action against hunting. I consider that to be quite high. Not because they care, but because its easy. Compared to many in their party, Biden and Harris are comparatively conservative (note: I said compared to the others in their party!). To get where they are, they have had to make a lot of promises to the assorted crazies. Virtually none of which they will keep. However it will be easy to throw the leftists a few token bones. Unfortunately, those 'bones' are likely to be anti-hunting/anti-shooting measures, all designed purely to fob off those who got them into power. I hope I'm wrong.

Ridgewalker said:
If we can’t import to hunt, I’ll just bring back photos. I’m pretty much out of space anyway particularly once I finally receive my 2019 trophies. JMO
Click to expand...

I'm in the same boat. Out of room.

this is probably going to be taken wrong by a lot of people but i dont care and wont wast time responding.when i kill an animal i want to give it immortality,i want my animal mounted so it will last longer than i will and longer than it would if it lived a normal life.i feel the animal deserves to be admired for ever, mounted it will be,dead in the wild it wont.J.M.O.!!!!

I too see a bright future for hunting. The value proposition is sound and sensible - sustainable hunting to support survival of the species. That message is resonating with the new informed generation and ties right in with the enjoyment people are finding with harvesting their healthy food from nature. Note the surge of women hunters, that is a healthy sign too. Easily accessible, reasonably priced game farms will complete the circle, it becomes an industry for farmers, and why not? Very many areas are totally unsuitable for other forms of agriculture and it just all makes sense. The big safari areas at a higher price end will probably be what hunters aspire to, at a higher price point and lower volume. Again all sensible. We all know this, but I think more and more nature generation are getting it too.
Carruthers

On the question of trophies to take home, if that were ever to be banned, or just got too difficult, one option may be to immortalise your hunt with a silver replica. Patrick Mavros makes the most exquisite animal sculptures that really capture the essence and character of the animal, and being solid silver they are a valuable and worthwhile tribute, even an investment.
Here is a sable that stands in my aptly named Sable Study, very rewarding gift from the family to commemorate my real life sable. 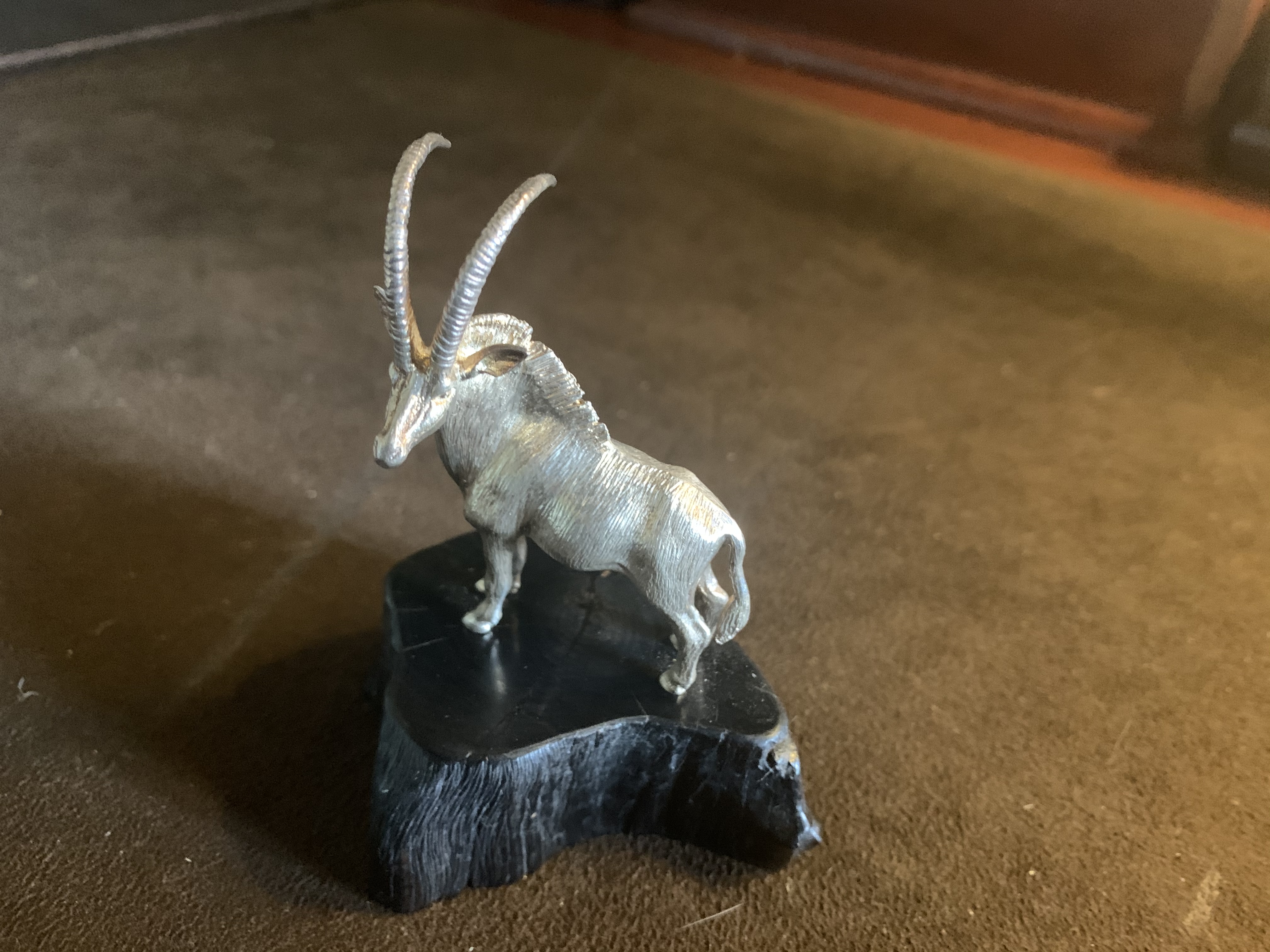 Don't forget COVID. This was a game changer which affected whole intercontinental tourism. African hunting farms can not survive without US and EU hunters. In discussion with few farm owners from NA and SA I understood that international hunters paid their 2020. hunts in late 2019. but because of COVID it was not possible to conduct hunt in May-Oct period therefore their safaris was postponed to 2021. Majority of hunters agreed to leave their payments with farm owners which are already using this money to cover current costs. It brings farm owners in situation that they will make no money in 2021 which will make huge impact on their business long therm. Now, if COVID prevent international hunters to come in Africa in 2021. then problem will be way bigger and many farmers bankruptcy can be expected. If rain season fail, problem will be even worse and light at the end of tunnel won't be seen before 2023.

Come on, what of the vaccine? Everything is saying this rainy season is above average and the 2022 one will be too. I think if you lve in Africa with the endless stream of challenges we need to deal with you get used to shining your own torch down dark tunnels and just getting on with it.
Carruthers

Wide tie, skinny tie, long skirt, short skirt. The pendulum swings. Hunting has been on the decline for years for a variety of reasons. I see the trend starting to swing the other way. More people shooting. More people wanting to harvest their own meat/food. As life gets more complicated people are choosing simpler things. One of the small blessings of Covid. As hunters mature they go from shoot anything to selective shooting to trophy hunting. International hunting will continue as these younger hunters progress along the natural trend of hunters.

They are going to mess with the importation of trophies. This isnt something that needs to pass congress, just need a super liberal in as the head of USFW. Everyone remember that POS Daniel Ashe? They are pissed and messing with importations is an easy way for them to mess with us without getting pushback from their voters.
B

Peacocke I appreciate your attitude, and yes chin-up and positive/winning attitude in the end is the best way to meet the future no matter what.
But the USA has proven it's reluctance to look at science when it is in conflict with what it wants, desires, or needs especially in concert with public opinion. The science of conservation no matter how proven will lose to the affections/knowledge of the general populace which is usually not much more developed than a child's first box of animal crackers. Banning a trophy import has so much more political upside among the larger voting populace than looking at the science of it... "low hanging fruit"in the political space of risk vs reward.
Wish I thought different, and praying I'm wrong
You must log in or register to reply here.

U
Controversial international hunting council up in the air

R
The ethics discussion of hunting...
2

Quarantine upon return to USA, Maybe

B
BillyMiller Qc_BearHunter BillyMiller wrote on Qc_BearHunter's profile.
Hi. I’m also new to AH. I’m a professional hunter in Zambia. If you would like me to quote or give you any advise would be more than happy to help. You can reach me on WhatsApp or Signal on +260 977 583697
27 minutes ago •••