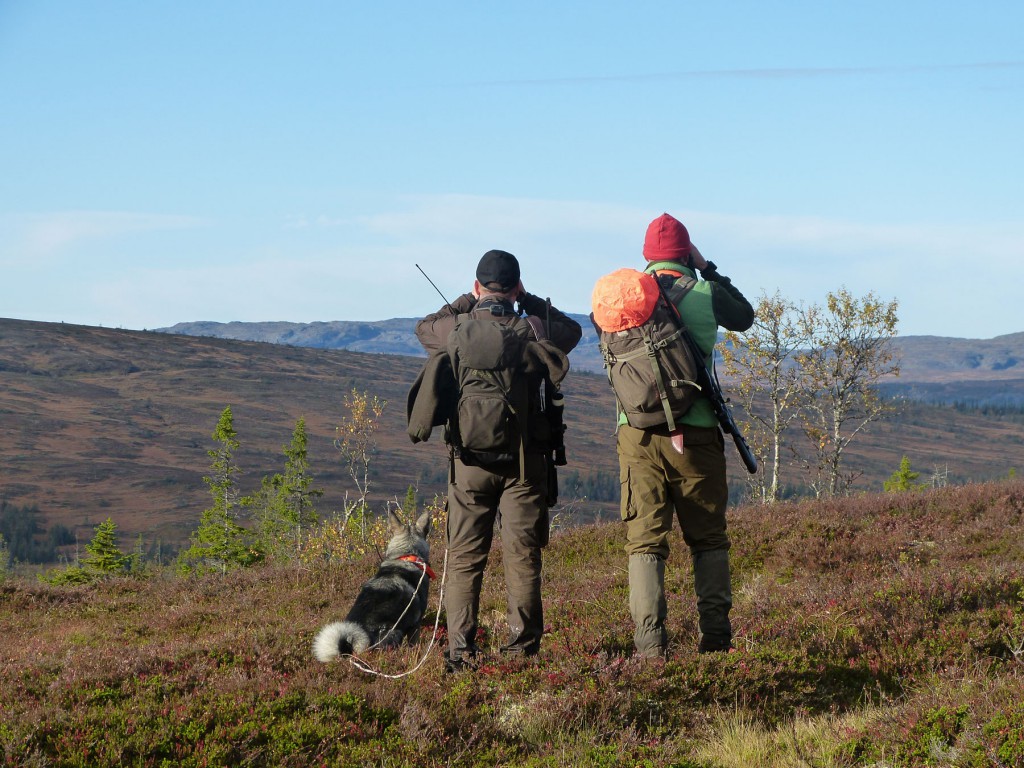 Traversing the peatland of Sweden’s taiga following a Swedish Moosehound, scaling mountains in search of a congregation of Lagopus, and finally navigating a crystal clear lake in hopes of deceiving a brown trout; this all was on the menu for the Fjelljakt Grand Slam. We had chosen to partake in a real challenge!

After having discovered the Swedish province of Jämtland petrified by glacial temperatures in the month of January, we wanted to return to this land of hunting and fishing to experience what makes the heart of our northern counterparts beat; moose hunting.

To do this we chose the best outfitter in the industry, the Swede Johan Persson. Johan has the honor of being the personal guide of the Swedish king once a year. This quality guarantee was confirmed throughout the entirety of the trip. In Swedish, “Fjell” is the term dedicated to the virgin spaces of the great north, while “Jakt” means hunting. “Fjelljakt” is the name of the organization directed by Johan that manages a trifle 15,000 hectares of private land. 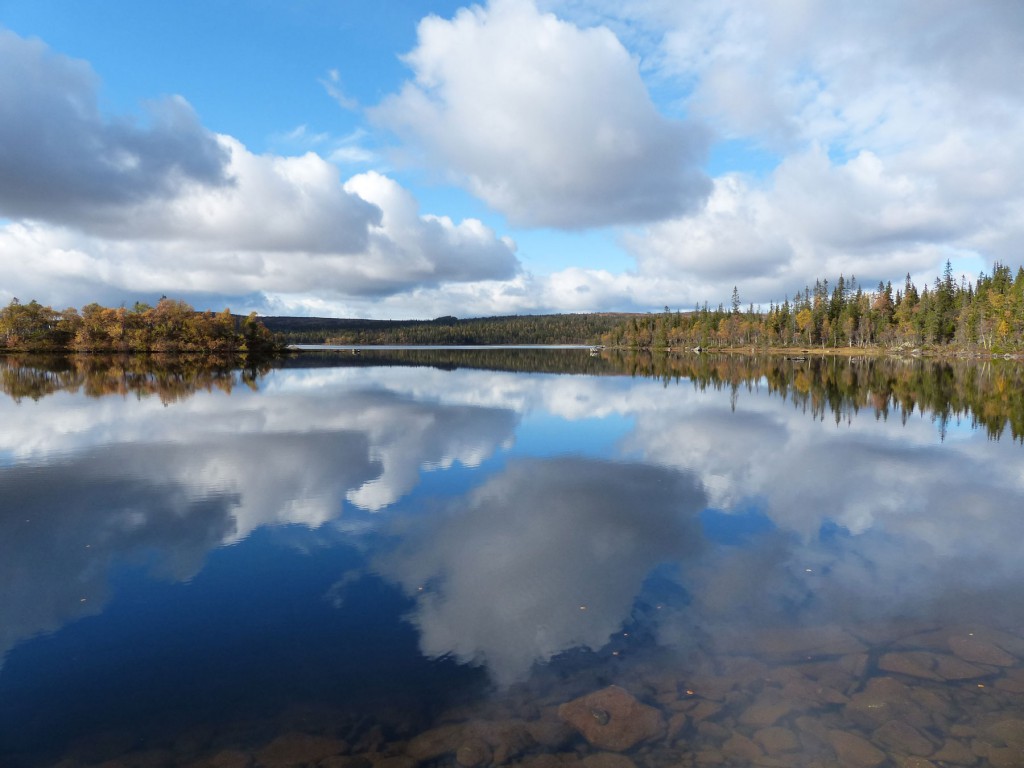 The territory is composed of extremely wide valleys crossed by clear and drinkable rivers, very thick forests interspersed by innumerable peat bogs, shallow lakes, and finally, interminable moors bordered by summits that culminate at 800 meters of altitude. This biotope diversity translates into a large variety of hunt-able species. Johan, having more than one trick up his sleeve, proposed an adventure a bit greater than just a moose hunt. Rather, we would embark on a quest that was a concept of French-Swedish inspiration: the Fjelljakt Grand Slam. The aim of the game was not to harvest out of the ordinary trophies, rather reveal the versatility necessary to harvest a moose, shoot a double of ptarmigan, and finally, hook a trout, all in a maximum of 5 days. 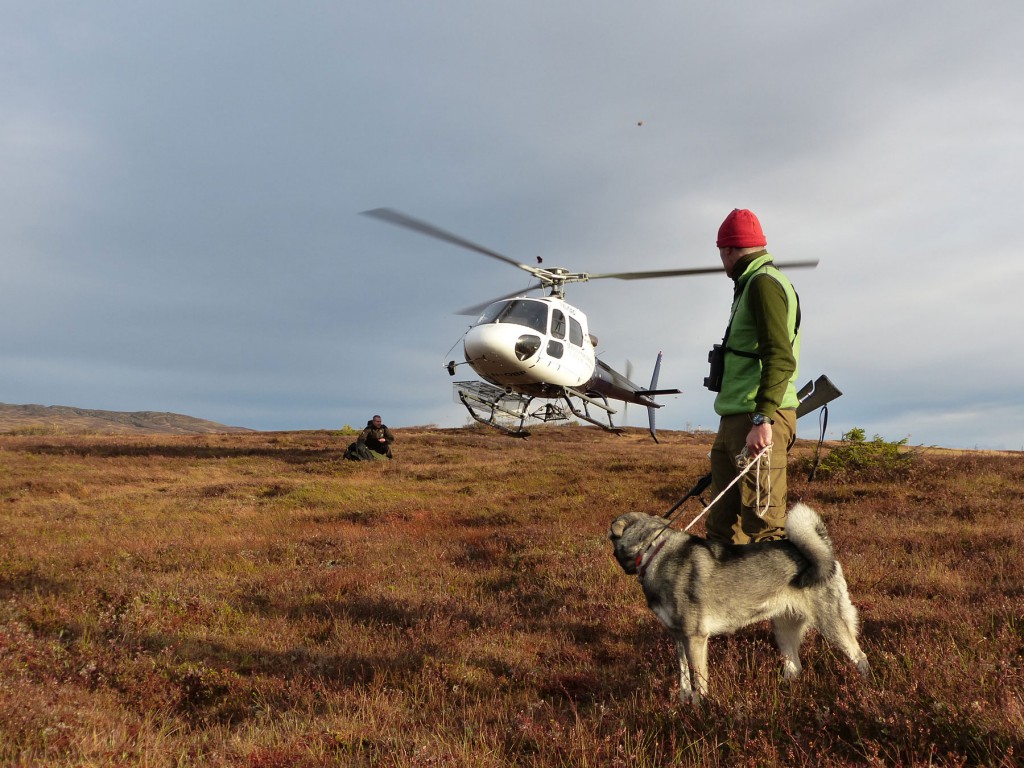 Conforming to Johan’s advice, we chose the last week of September to visit his territory. Why that date? Simply because from September 26th onwards the moose season is closed temporarily, since the species’ rut is then at its peak. In Sweden it is not permitted to hunt game in their rut or pairing time. This regulation applies to big, as well as to small game. The few days preceding the season’s closure are nevertheless an extremely favorable time to encounter old bulls, which one of us would have the opportunity to validate. 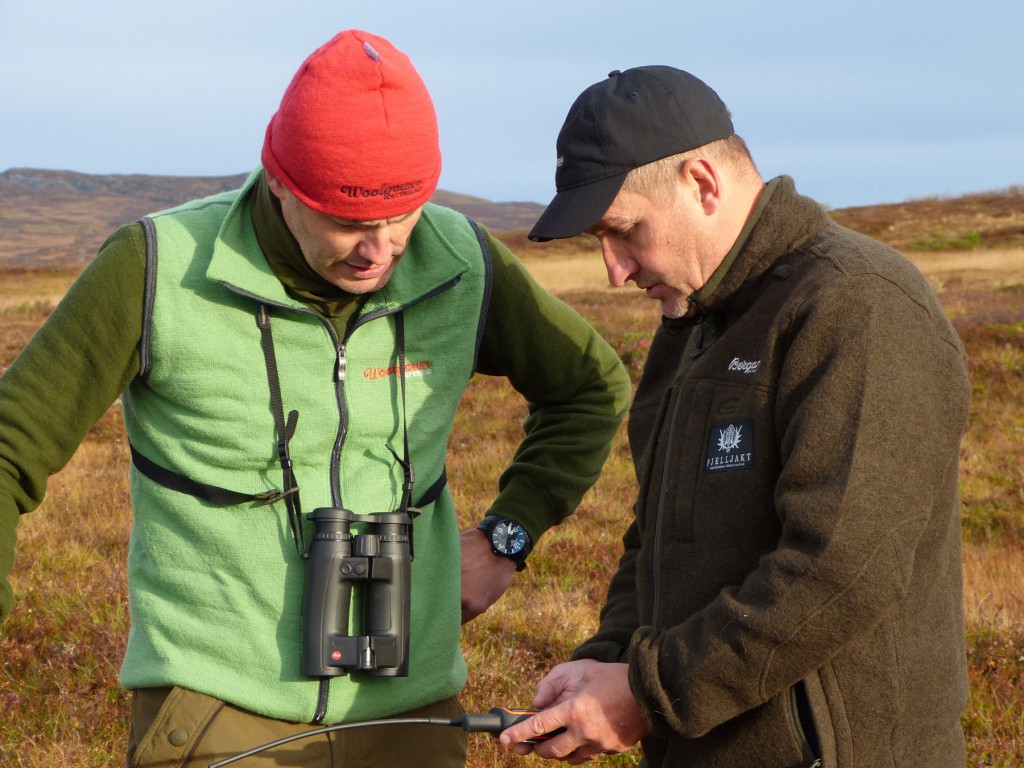 For the Fjelljakt Grand Slam, two techniques are used for hunting moose. The first is calling at daybreak, while the second is far more sporty, as one must follow a moosehound trying bring a moose to bay. On the first day of moose hunting we had several encounters. However, no shot was granted due to a very unpredictable wind. The second day proved more fruitful. In the morning, a fantastic gold medal moose was brought in by calling, and the afternoon allowed two moose of a more modest size to be harvested. The first step of the Grand Slam was in the bag, but not without plenty of sweat. 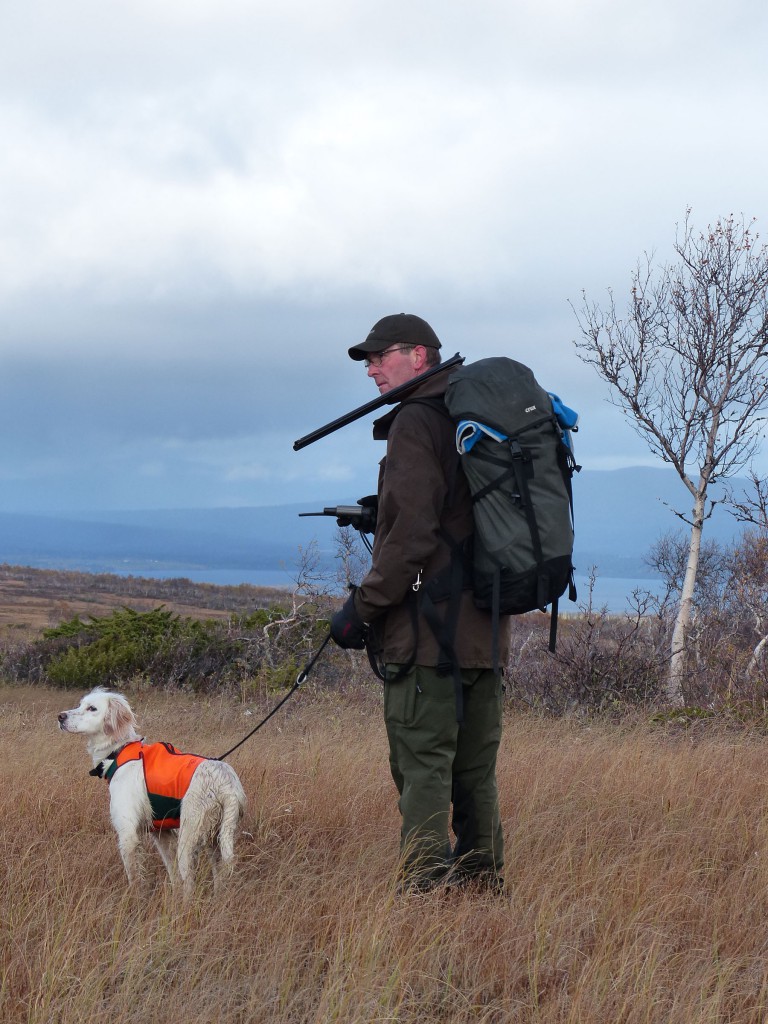 After an excellent gastronomic dinner prepared by the Medstugan lodge’s chef, and one restorative night, the third day was devoted to hunting ptarmigan. Our calves, having been murdered by the high-speed pursuit after moose, were still numb, but we were spared of the ascent towards the high plateaus thanks to helicopter transfer. This method of transportation is very common for hunting in Sweden, since the majority of territories are totally inaccessible to highway vehicles. The weapons (transported in cases), the men and the dogs took their positions on board and in a few minutes we entered the most remote zones. This time, the moosehounds were replaced by a Gordon and English setter. 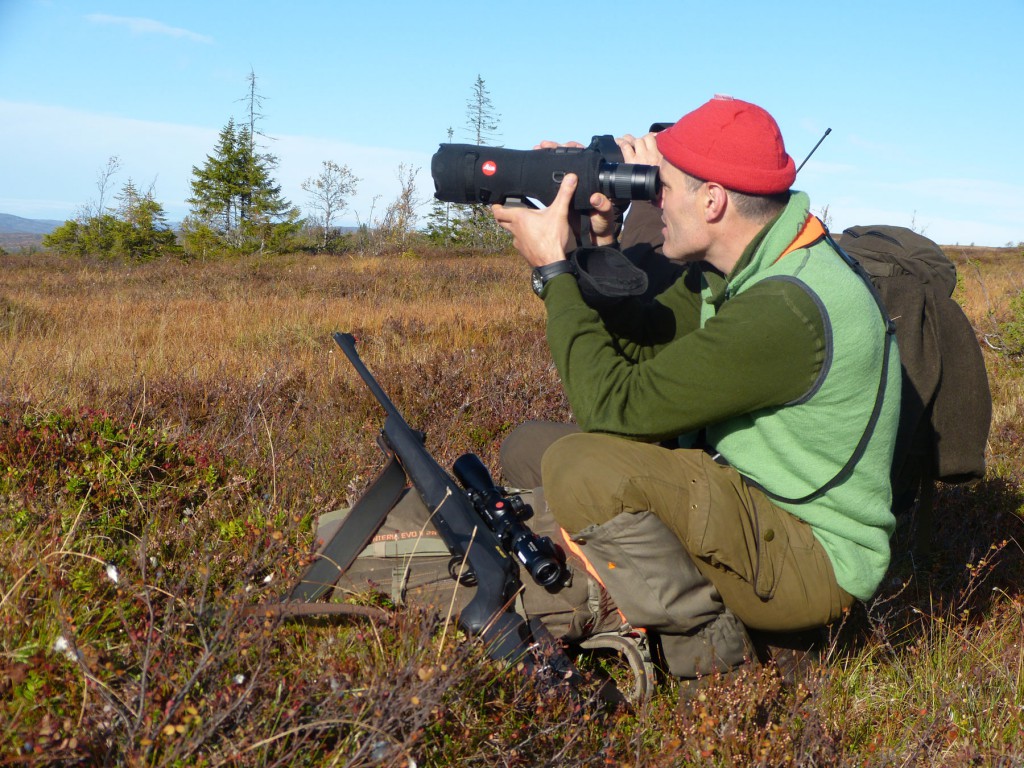 Any search greater than a kilometer was followed by GPS! Johan used nothing but the best Swedish dog handlers. We witnessed an incredible spectacle over the course of the day. Imagine yourself following the concentrated work of a bird dog through your binoculars… It was a breathtaking scene both literally and figuratively, since once the dog stopped it was up to us to climb the slopes, to jump across torrents, and traverse birch forests to assist the dog. Of course, this all required many long minutes to do, and once you arrived within range, the ptarmigan often flew off even before you had time to recover. 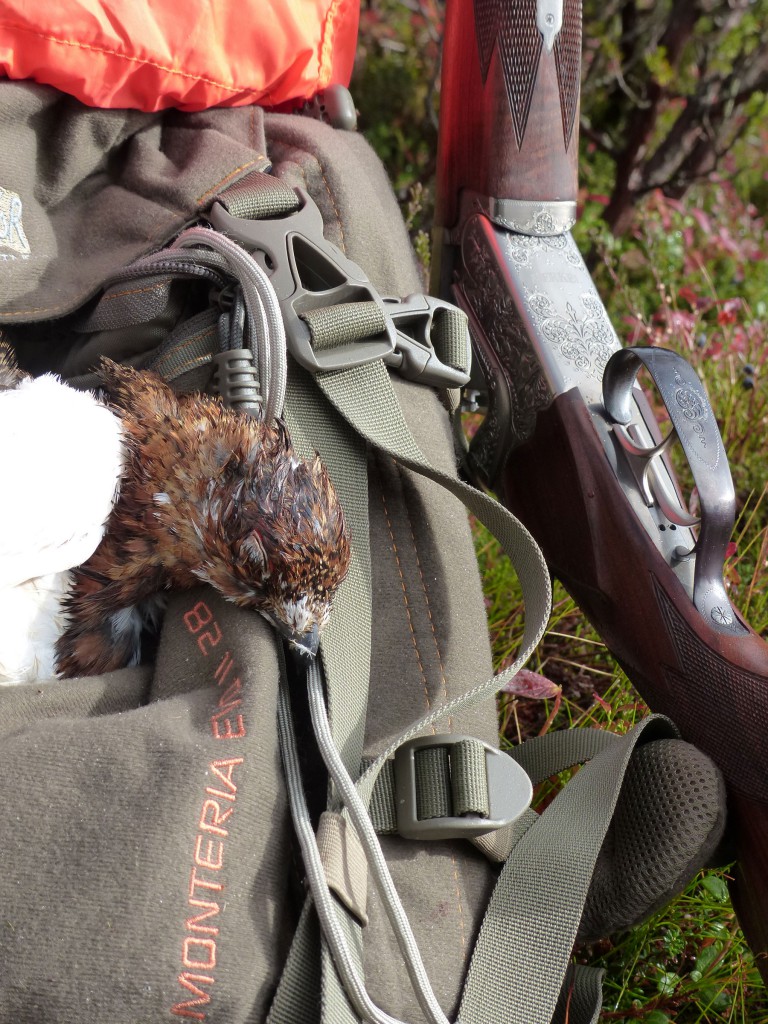 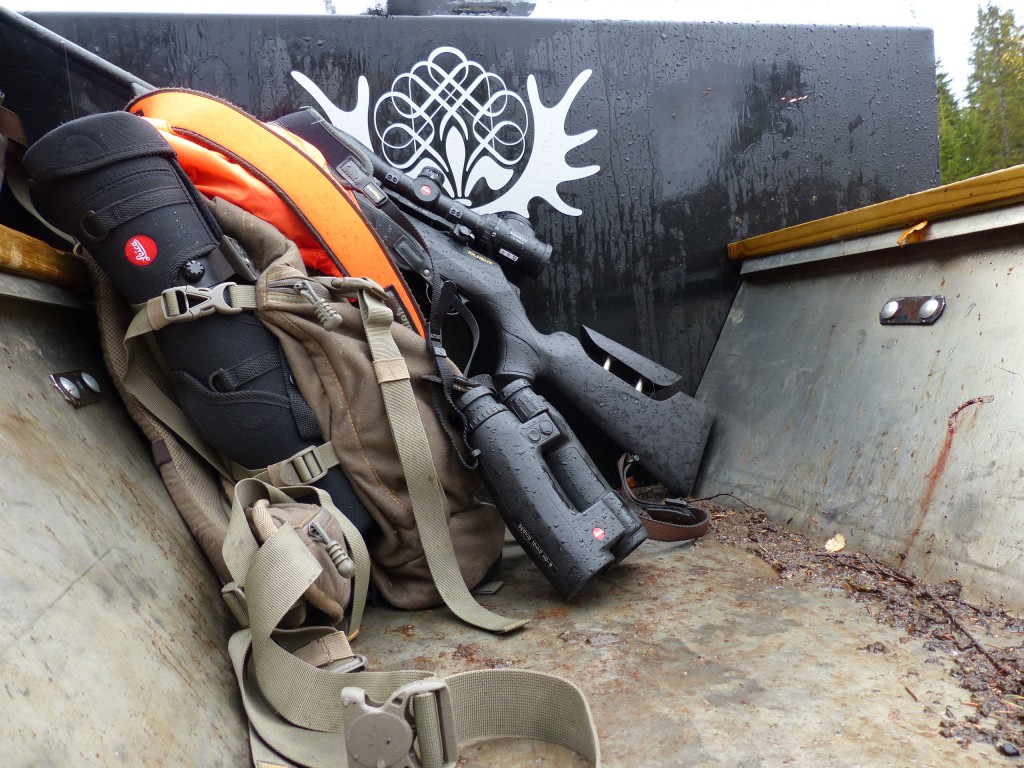 In such conditions, touching a single one of these exploding, flying bombs was already a miracle, whereas a double was worthy of a gold medal in the Olympics. Nevertheless, one of us succeeded in making a superb double thanks to his 20 gauge semi-auto shotgun, a weapon tolerated by Swedish hunters but not really liked. As always, lunch was al fresco around a fire, partially to not waste time on useless transfers, but mainly to appreciate the pleasure of hunting in the heart of a raw nature. We shot eight ptarmigan with three guns, two dogs, from a total of about 60 flushed birds. These results corresponded perfectly with the criteria of a responsible, sustainable, and difficult hunt. 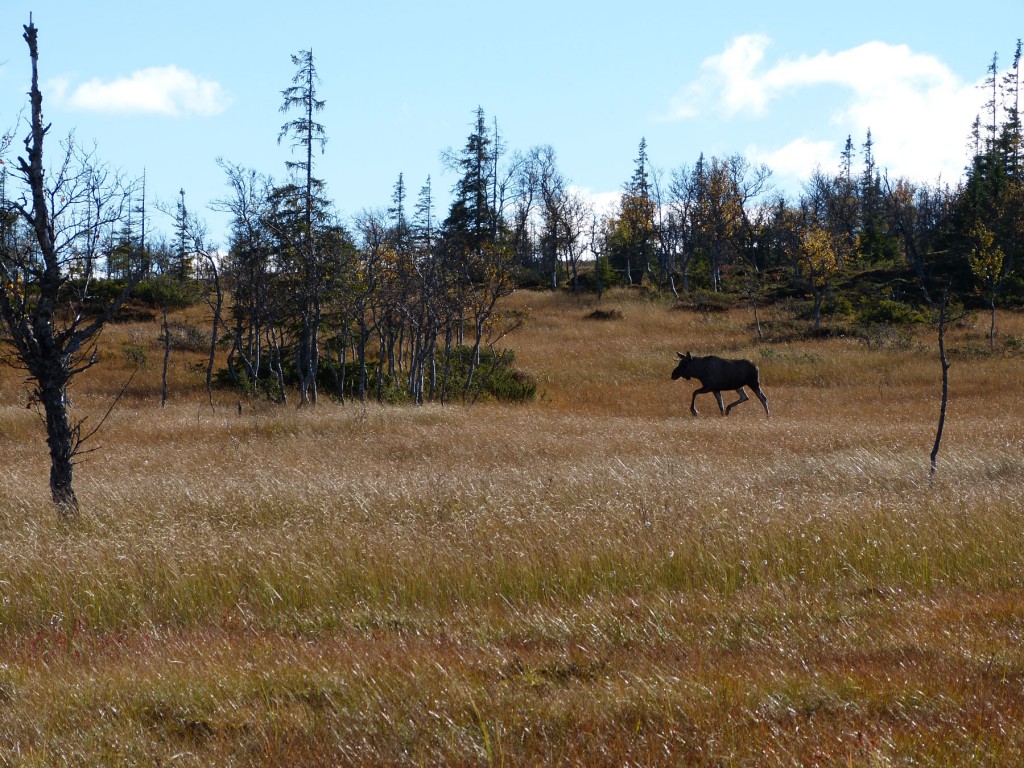 Three days of intense sport did not curb our spirits, and despite the absence of a double of ptarmigan for two of us, the fourth day was reserved for fishing. After sleeping in, as granted by our host, it was 9 am when we stepped into two small boats, accompanied by Frederik, the Medstugan fishing guide. 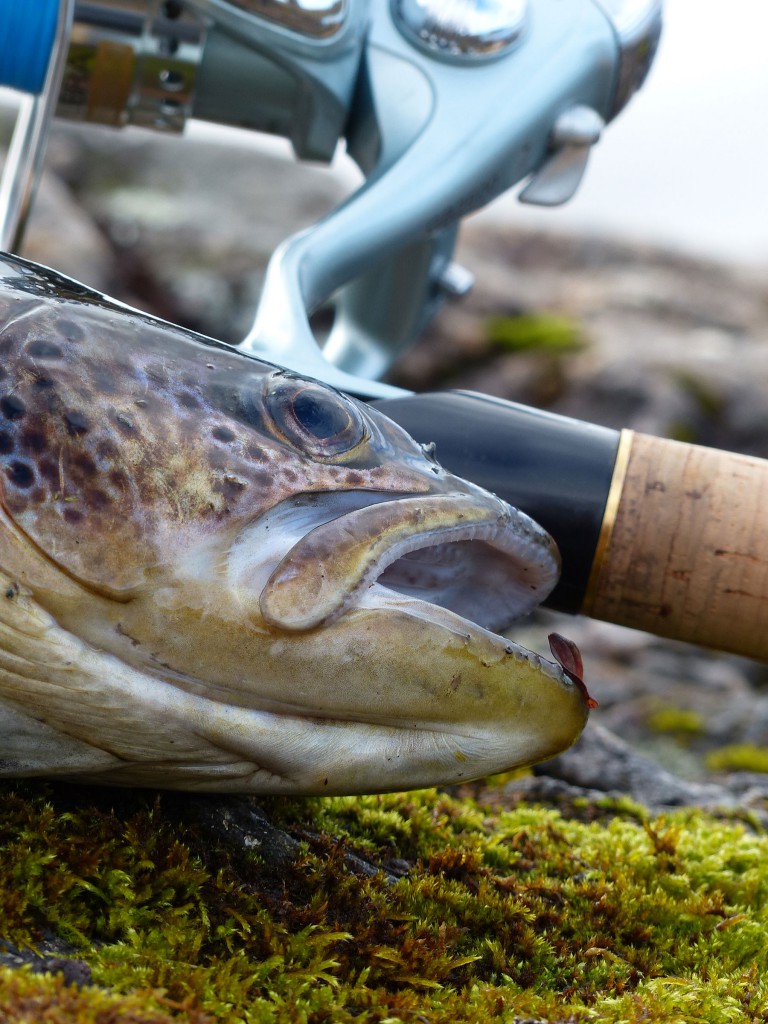 Not being fishermen, Frederik taught us the rudiments of the “trade”. Very swiftly, the rippling lures were attacked by fish… but they didn’t quite respect the net invading their territory. Less than 800 grams was considered “no kill”, and the fish was placed back in the water. Shortly before noon one of the reels began emitting an ear-splitting sound; the line rolled out quickly and at each attempt to reel it in, the rod bent to its limits. 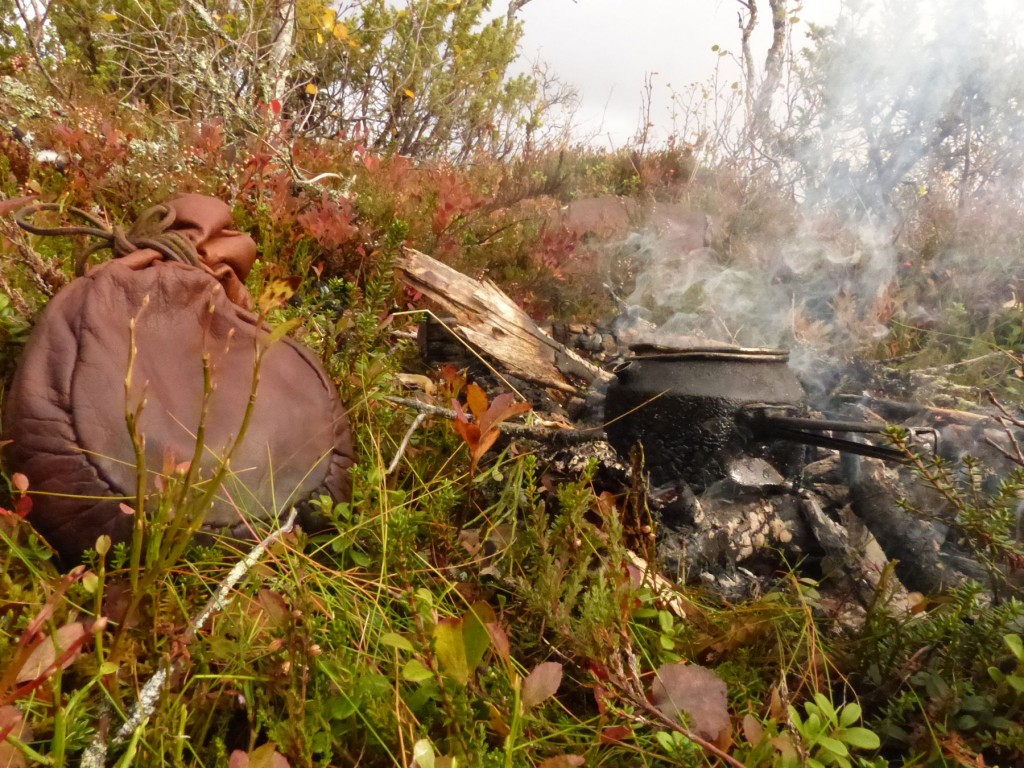 Thanks to Frederik’s guidance, a 1.550 kilogram trout was brought aboard after four fruitless attempts. This one was not going to take another bath after the photo session! Not a breath of wind touched the lake’s surface, that had been transformed into a giant mirror, on which the mountains and the autumnal colours of the vegetation were reflected. It was a moment of indescribable beauty, that we appreciated while savouring three trout, cooked over a wood fire on a small island equipped with a cosy fishing chalet.

Yes, paradise on earth really does exist, and it’s called “Medstugan.” The challenge that this paradise throws at you is dubbed the “Fjelljakt Grand Slam.” Are you ready to take up this adventure? 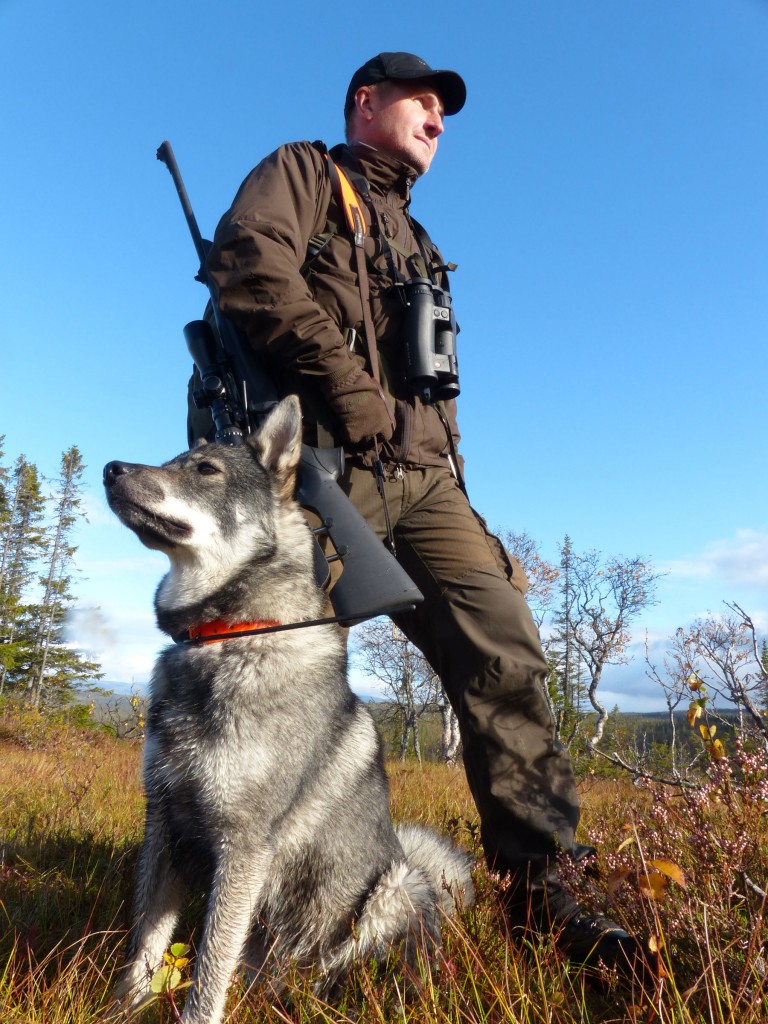 Hunting with Technology
In northern Europe, hunting is synonymous with tradition, modernism, and efficiency. In the infinitely wide spaces, hunters are therefore assisted by a battery of technological accessories, of which the GPS is without a doubt the most common. To locate the dogs, to locate oneself, transmit the coordinates of a helicopter pick up spot, there are many applications for which a GPS is an unavoidable ally. Certain chaste souls never miss a single opportunity to wail about this so-called “distortion of the essence of hunting.” However, hunters who realize their passion in the hostile environment of the Great North know well enough that modern technology can one day or another save their life. 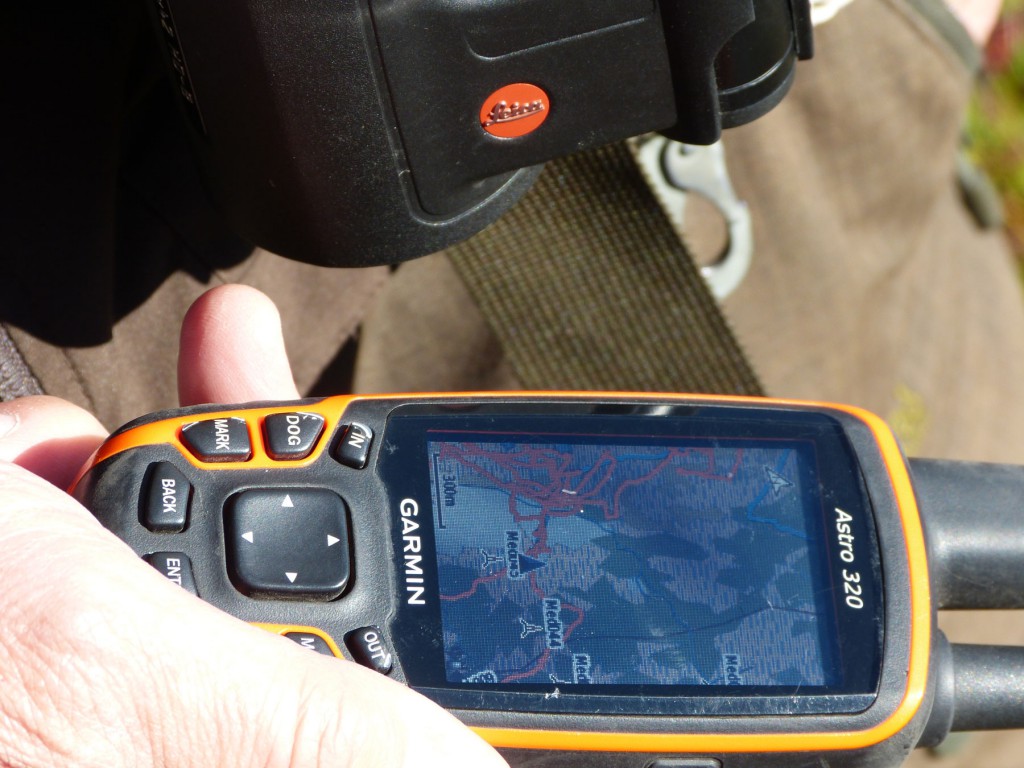 Be Irresistible
A Swedish legend claims that if you kiss a moose, you become irresistible. It is best to avoid proceeding this operation with your vehicle, but you can try your luck in the Sylvi Jektvik park, a few kilometers away from the Medstugan hunting camp. The Sylvi moose are reputed to be the most welcoming in Sweden, but we will admit that the dominant bull, baptized Arnjolt, is not always pleased about smooching visitors. We tested this for you! 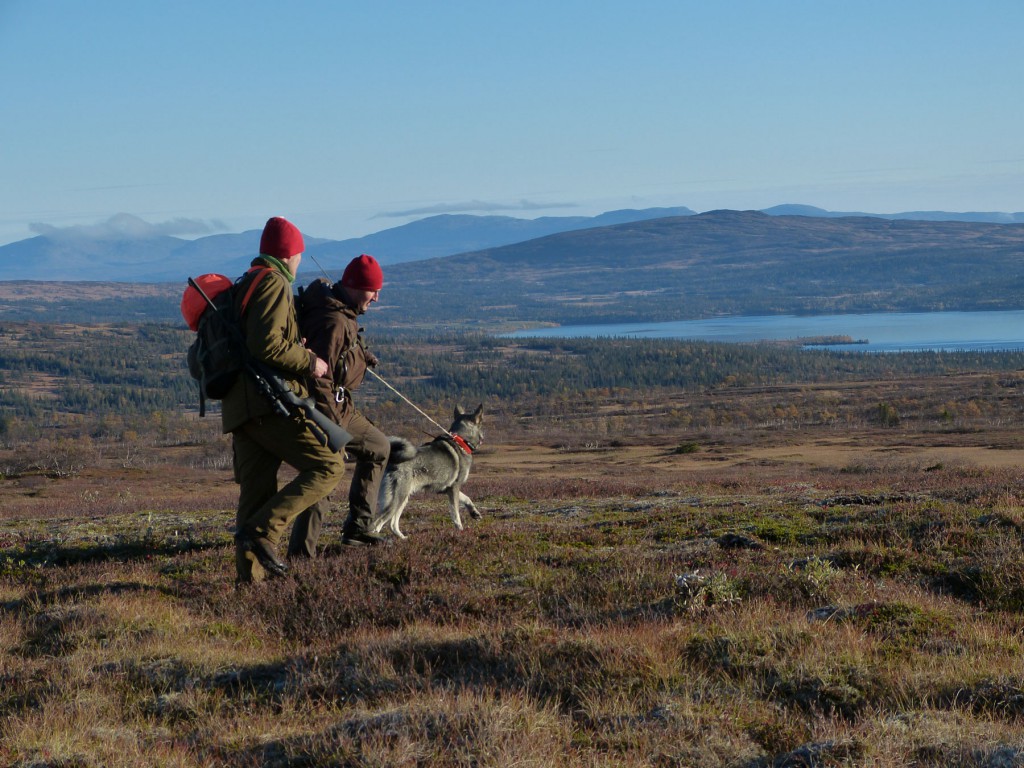 Interesting report,some photos of the moose would have been better added.

I personally do not believe a single moose was taken... Pictures of birds and fish only! Hah!

Seriously, a very entertaining report. Thanks
"When my friends tell me that I have led a remarkable life, I have to admit having done my best to make it so" - John Kingsley-Heath

Beautiful country.
Tommorow is promised to no one. Go live your dreams.
You must log in or register to reply here.