Fishing in the Arabian sea

When I moved to Dubai in September 2007 the last thing on my mind was fishing. Who cares about fishing in the desert???

Well after a couple of months of hard work and a lot of sweat I met a guy by the name of Gavin Haynes he just moved from South Africa with his family and it was not long before we started talking about fishing.
Gavin is a keen angler and he even brought his semi ridged inflatable with 2 x 40HP from South Africa.

Both of us are keen lure anglers and we decided to visit the east coast of the UAE to see what fish we could land with our 7 ft spinning tackle and plastic and buck tail jigs.

We had fun almost from the 1st cast and we caught a lot of fish.
Like Spotted Corral trout and Russell’s snapper to name but a few of the species. 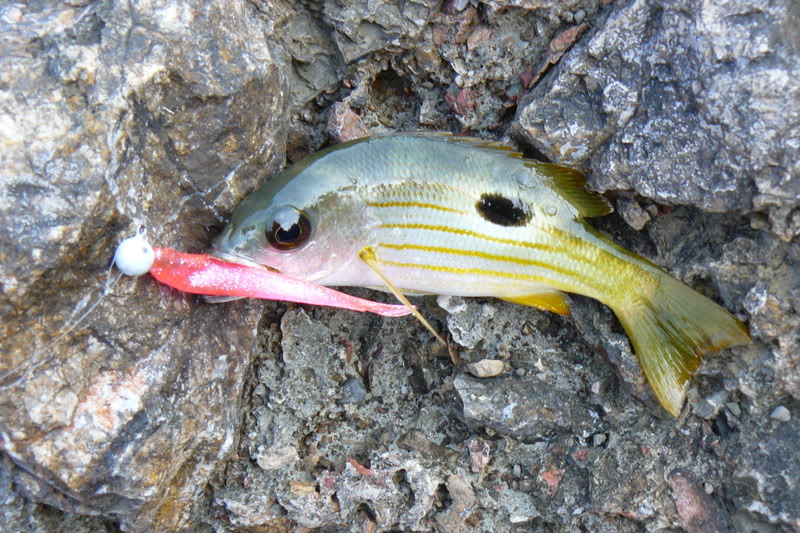 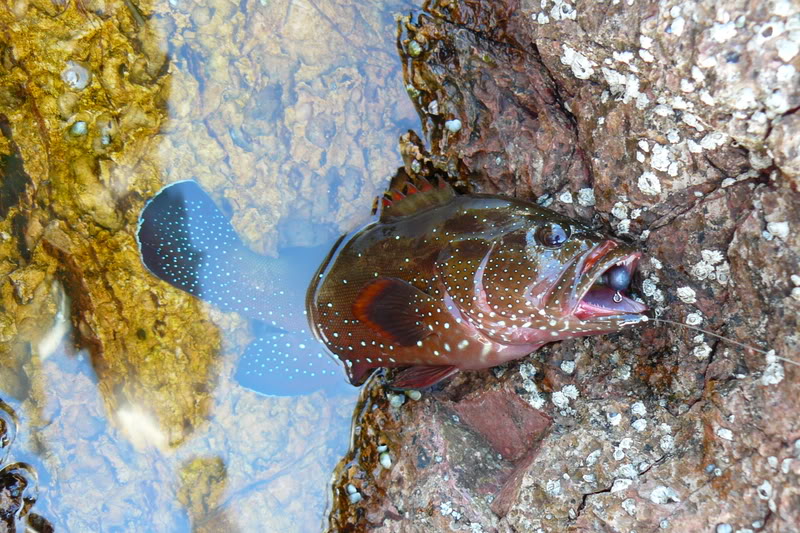 The high light of the trip was when Gavin caught a nice 7kg King Mackerel (Cuta) from the rocks on a white buck tail jig. 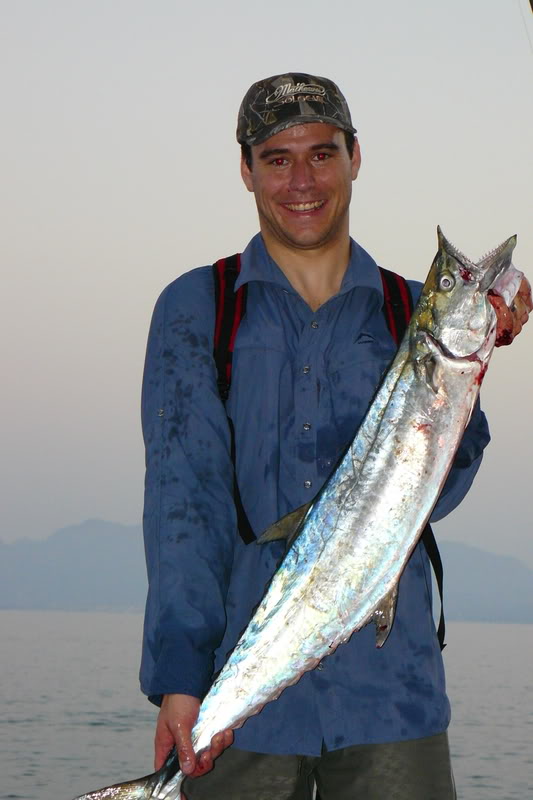 Our next trip we planned to get out onto the water with his semi ridged.
Just out of the harbor we could see birds diving and feeding.
We moved closer and 1st Gavin and then I got stuck on our 1st Queen Fish.
These are really a lot of fun to catch on light tackle as the fight very hard to the end. With spectacular jumps in between they are one of my favorite species to target.


On the next trip I caught a fish I have always wanted to catch.
I was using a 8 ft spinning rod with a Shimano 4000 Stadic spinning reel loaded with 8 lbs fire line.

As the Maria Spoon hit the water the line went tight and a very angry Dorado jumped out of the water. This was one of the fish I always dreamed about catching and now that dream was coming true.
After a very enjoyable fight my 1st Dorado was taking a boat ride… 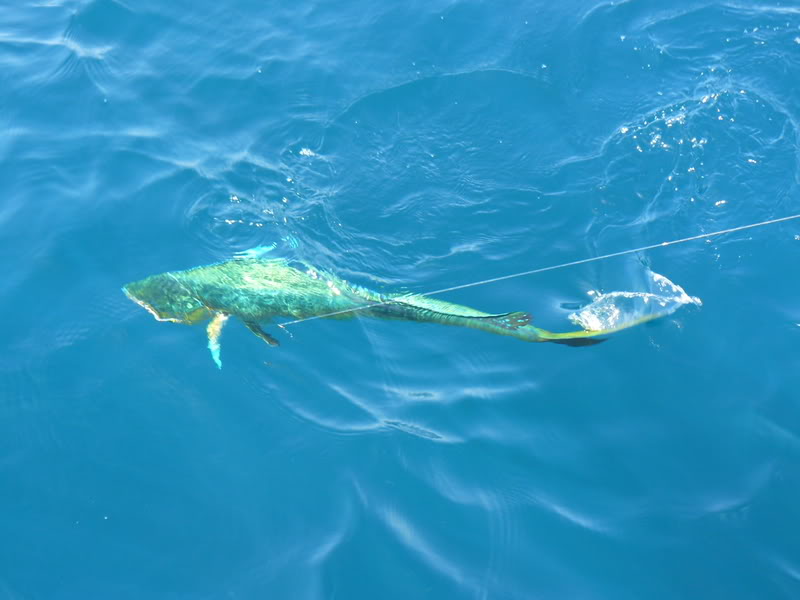 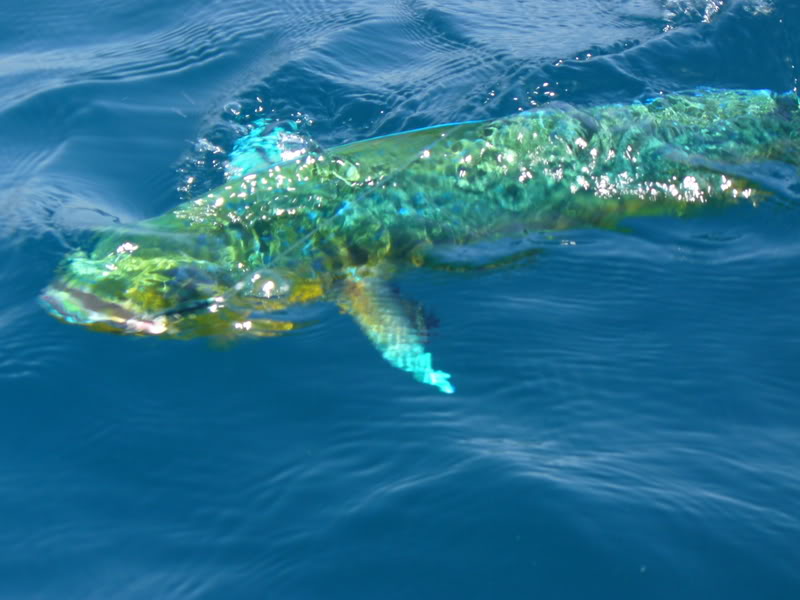 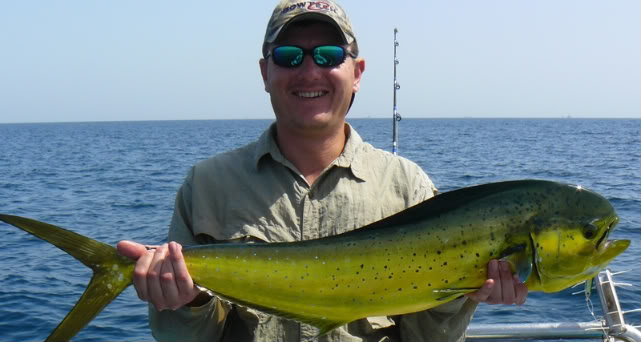 The water around the east coast of the UAE goes up to 33 degrees Celsius during the warm summer months. During these times we went out a couple of times and had lots of fun casting surface lures at 2kg class tuna’s.
When these little buggers start feeding on the surface of the sea it looks and sounds like a boiling pot of water.

Around October the water start cooling down to around 27 degrees C and the dorado start to move closer to shore.
Now we were really enjoying catching dorado’s. It was not strange to catch 10 to 15 fish for a morning’s outing.

They would bite on almost any lure we trolled or cast to them.
Sometimes we could get live bait

And that would really produce the true UAE gold.
And these guys are awesome to eat as well. 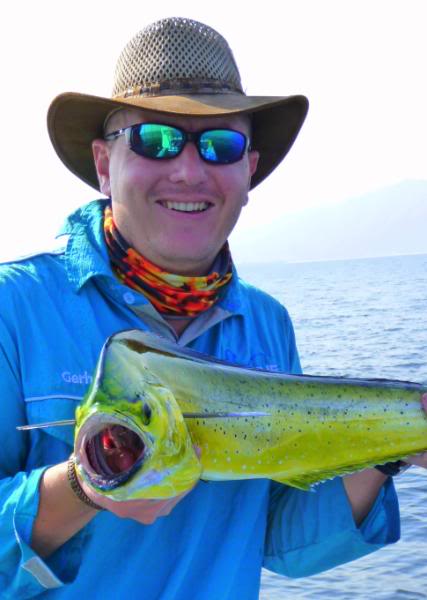 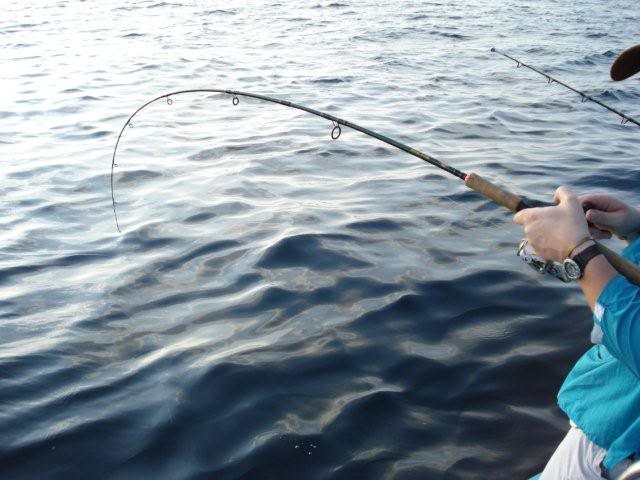 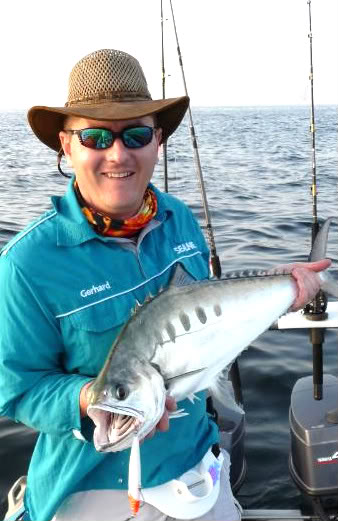 As I said before I was not thinking about fishing when I came to Dubai the 1st time but I really enjoyed fishing here and made some good friends along the way.

Who would have thought one could catch fish in the desert….?

Great pics Gerhard! You've got me wanting to plan a trip out there now to try it out
S

Gerhard, I have to say that I love your pictorial posts. They are so much fun to read and you really have a way of drawing me into whatever you are writing about. You have even got me reading your posts on topics that I have previously not been all that interested in, like sorry to say, bow hunting, I am now reading because I like your posts. I do love fishing so you got me hooked with that, but keep up with the great posts on any subject and I'll be there to check them out!

Love your dorado pictures Gerhard. I have caught a few but it has always been on heavy tackle while fishing for tuna. I would love to try and catch some on light tackle or a fly. Thanks for sharing your pictures.

Thanks for the kind remarks.

If you want to tackle dorado on fly make sure you use a 12 weight rod. Anything lighter and you will be taken to the cleaners by this strong fighting fish bigger than 10 lbs.
Under African Skies

Here is a 90 Lb Sail Fish that our Oman distributor, Captain Bill White caught in the Arabian sea.

Wow!! thanks for the picture.

Fishing in the desert?

Yep do it all the time. Heres' a couple on the 3wt fly rod. 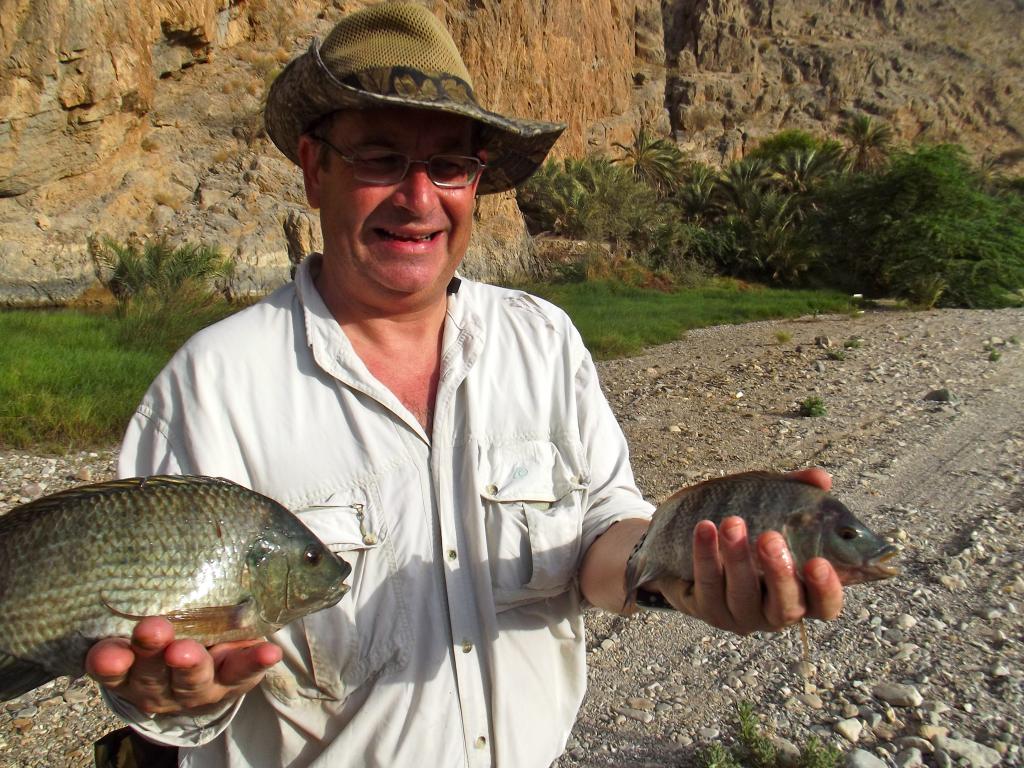 Gerhard said:
Thanks for the kind remarks.

If you want to tackle dorado on fly make sure you use a 12 weight rod. Anything lighter and you will be taken to the cleaners by this strong fighting fish bigger than 10 lbs.
Click to expand...

Gerhard said:
Thanks for the kind remarks.

Hi. Don't want to burst your bubble but here's some Dorado on a 3 wt!!!
https://www.dropbox.com/s/h4s9pg3y1fctptv/Hollis Madness - Dorado on The Fly 3Wt 3lb Test.mp4?dl=0

Great report! I'm leaving today headed back to KSA, will try to find a pic of my 41" queen caught on light tackle and top water while wading at our compound.
Y'all can go to hell, I'm going to Texas! Davy Crockett

Sand Rat said:
Great report! I'm leaving today headed back to KSA, will try to find a pic of my 41" queen caught on light tackle and top water while wading at our compound.
Click to expand...

Look forward to it. have a safe trip.

Great report and pics. Thanks for sharing. Bruce

Yebbo... fly fishing for these beauties is great fun.. I used 9/ 10 wt but agree that it gets tricky with the bigger boys and you have to let them run a lot or risk breaking the rod, which happened a few times with my son behind the reel!! I now use 12 wt for these and also have a 15wt for sailies and bigger tuna/ barracuda etc
I expect to pass this way but once.... any good thing that I can do for my fellow man, let me not deter, but do it now... for I do not expect to pass this way again.
Anonymous

Longtail Tuna on the fly Oman 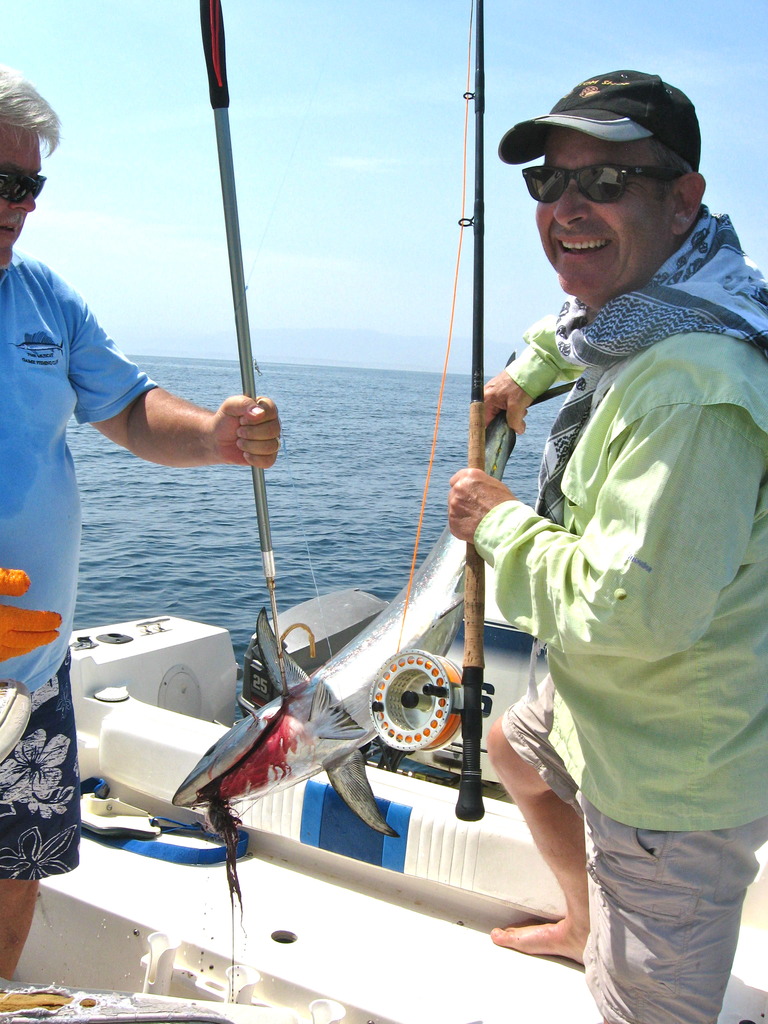 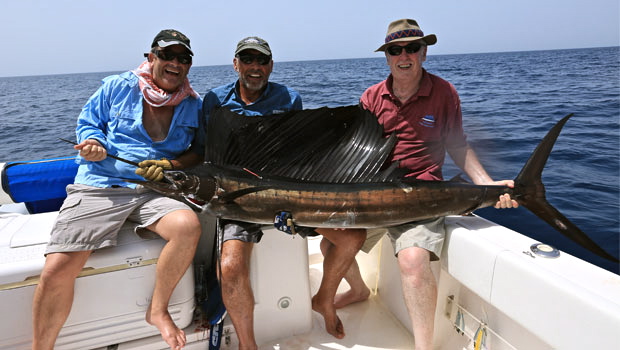 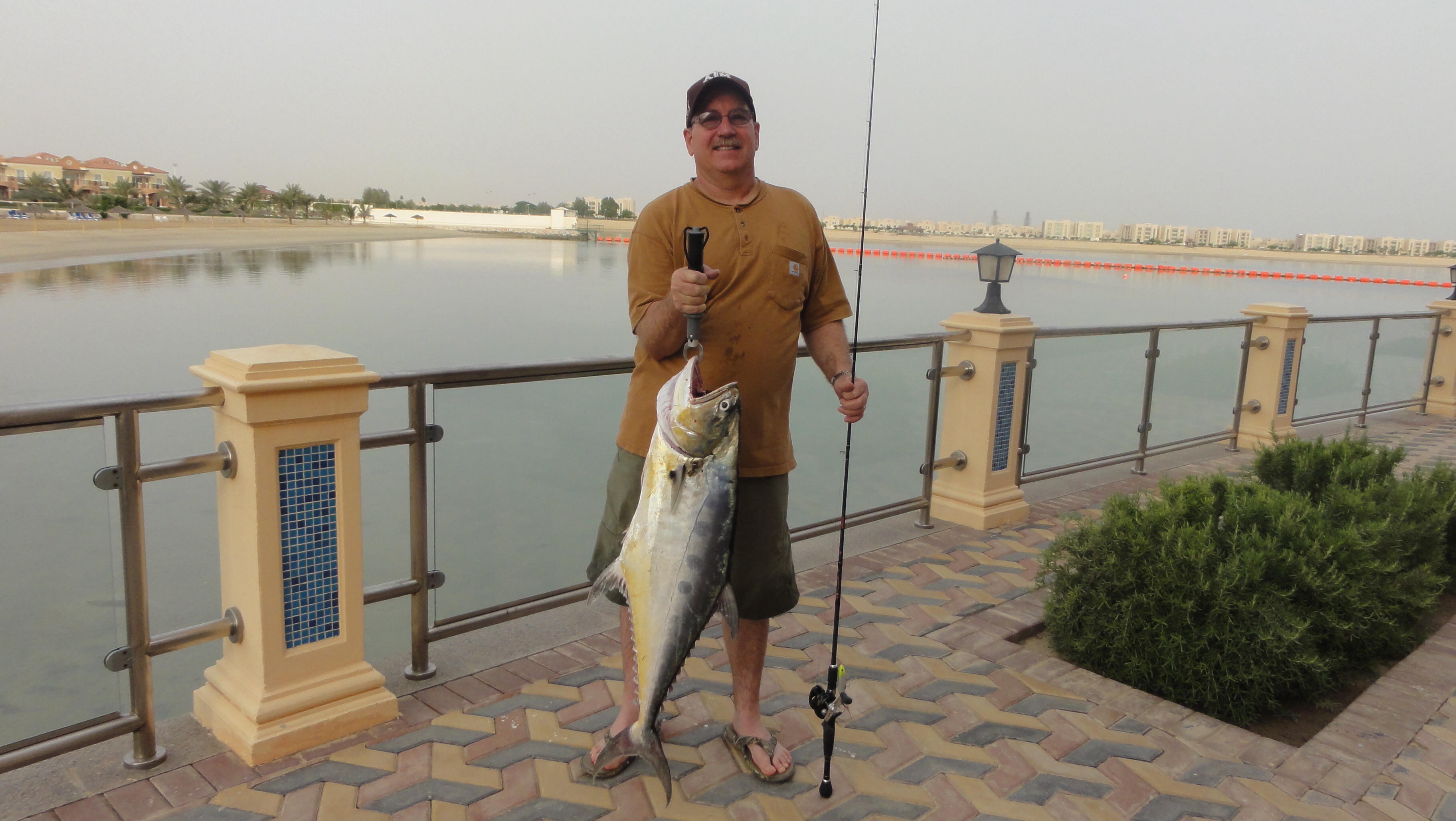 Hamour wenched out of the rocks on heavy tackle. Once hooked they head straight to the bottom and run under the rocks around our rec center. The sea bream were caught while fishing for bait to use on the Hamour. 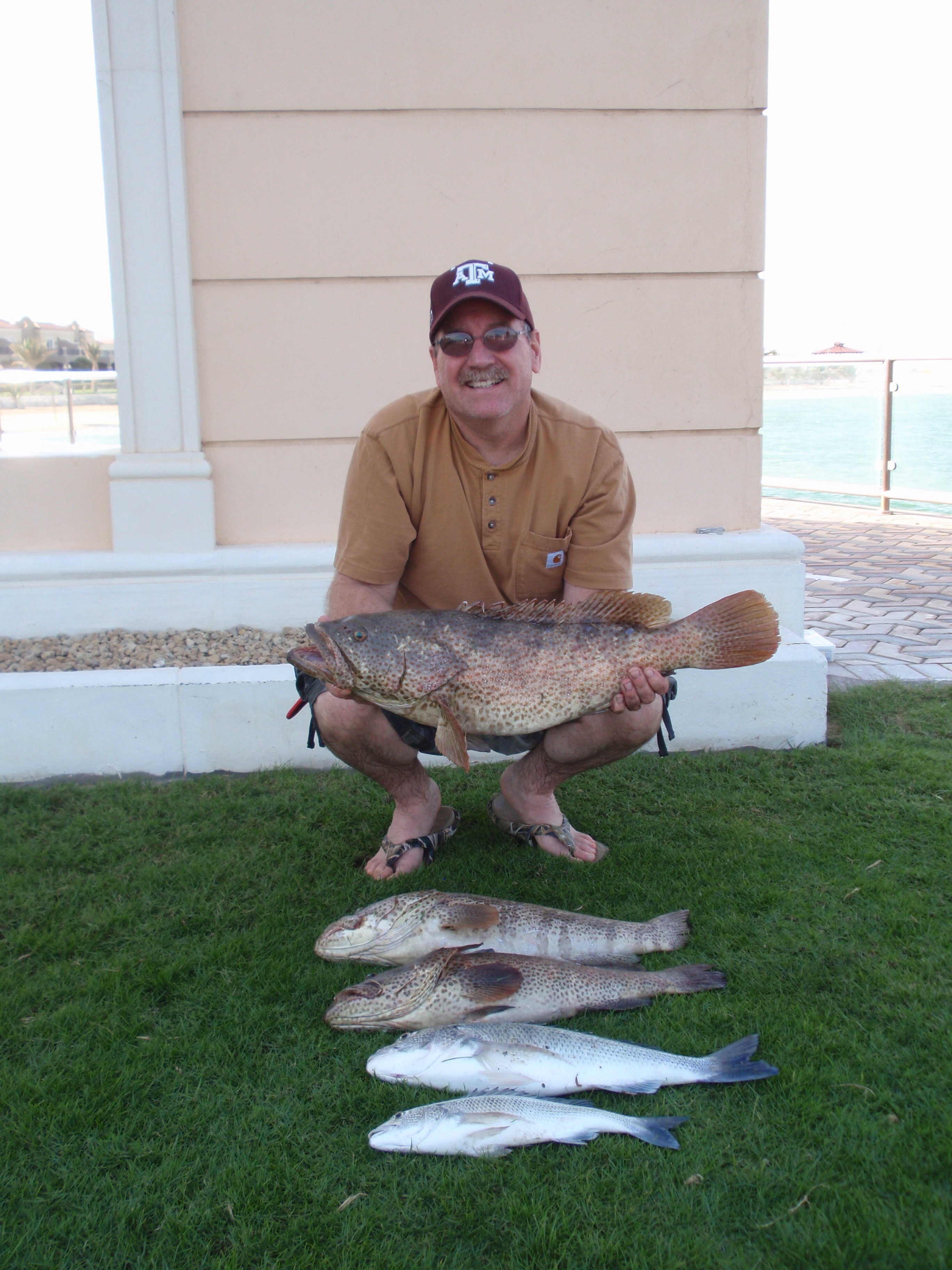 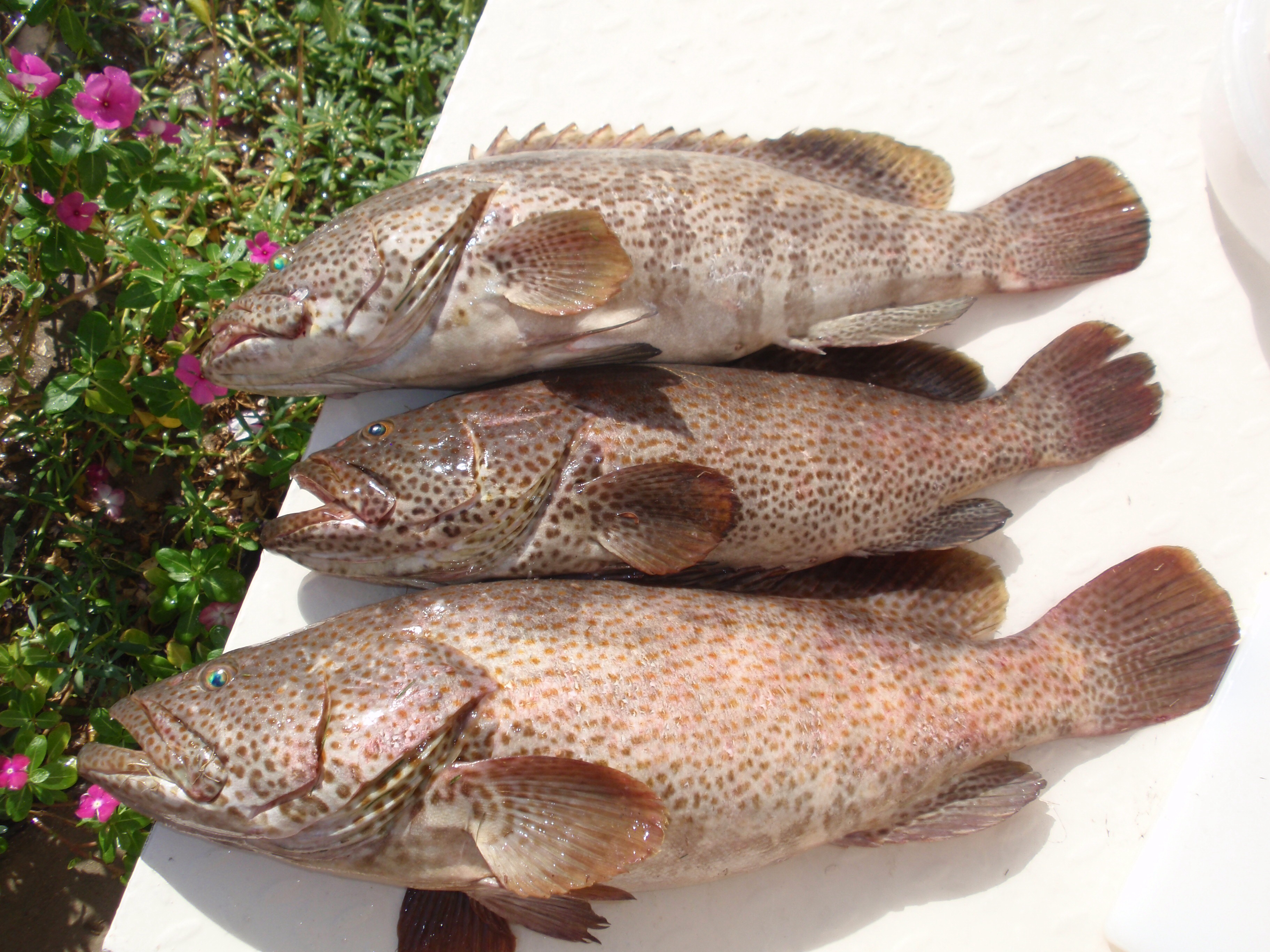 The sea us full of ugly critters! But some of them eat real good !

Cracking fish Sand Rat. (especially the Queen) and fancy catching it where you did.

By the way meant to say, great pictures and write-up Gerhard, are yo still in the region?
You must log in or register to reply here.

Fishing In The Arabian Sea