I had to go to Missouri to do some work on my property this weekend.

Like any good gun nut, I took something to shoot, just in case I had some time to spare.

My intention with these first loads was to put together a load with the 400gr Hornady Interbond that would roughly duplicate the old original 404 Jeffery load, at 2,100 to 2,150. I also wanted to get a 350gr Speer to around 2,200 or so (for those big, mean Missouri pigs and deer). Then a cast bullet load at around 2,000 for practice or deer/pigs.

The first load I assembled was:

A second load was assembled as follows:

Last load shot across the screens was:

I did manage to dig a few of the Hornady and Speer bullets from the 6x8 timbers I was shooting through/into. I will weigh and measure them just for giggles.

The No 1 was very nice shooting at this power level. I was shooting offhand...so that makes a big difference vs off the bench! I was grinning like a kid as those big bullets were tearing up the timbers!

These loads were safe in my rifle. Anyone using the above data assumes all risks associated with doing so.

As you might expect, primers were round and pressures seemed very low.

Decided to try to make some mid-range loads with H414, seeing as I have about 15 pounds of it.

I knew I would need to use a filler, as the charge would be less than nearly case-filling.

So, 2 grains of dacron got placed over each charge. The dacron filled all the space between the powder and the base of the bullet.

Velocities were extremely uniform. Extreme spread on 10 rounds chronographed was only 25 fps.

But get this...even with magnum primers and the filler, this load gave a consistent half-second hangfire! Talk about making you concentrate on your follow-though!

I was shocked that the velocities were so consistent. The hangfires were really consistent, too!

I was shooting off-hand/rapid fire reload (well, as rapidly as I can with a one-shooter), so between that, and the hang-fire, no way to determine accuracy. Not that it would matter....H414 is going on my "not in the Rigby at 2,200 fps" bucket.

Just loaded these tonight, with IMR 4831. Should also get me right around 2,200 fps. Nice, light practice load. 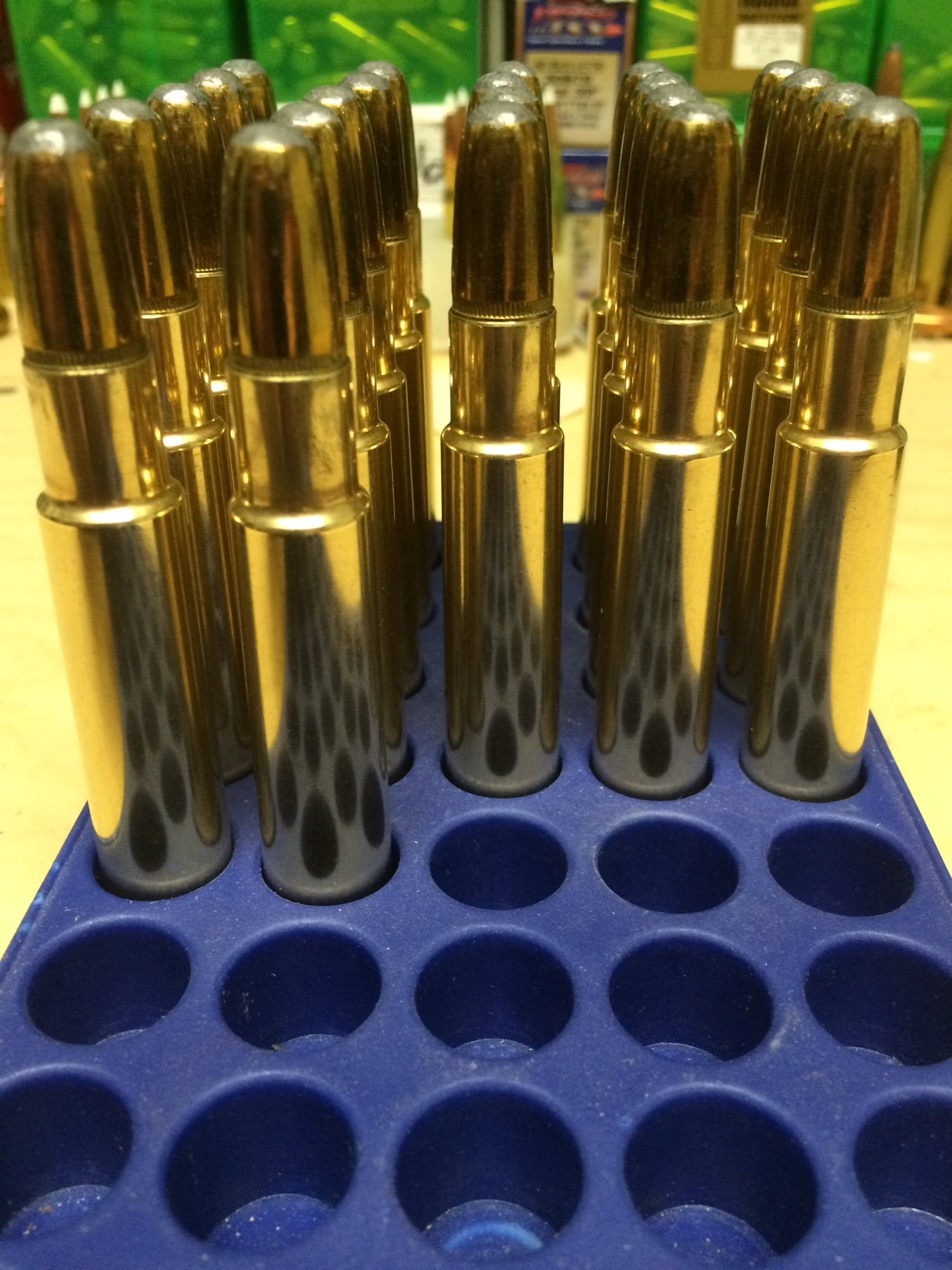 Oh shiny! Very satisfying sending a few big rounds down range. Nearly up to my 404jeff 400gr at 2350fps

I suspect your 2200 fps load with 400 gr bullet is much closer to the original Pre-War ammunition ballistics than what was claimed back then with Rigby's original and excellent "steel envelope bullet" (410 gr at supposedly 2350 fps).

Dr. Kevin Robertson (Doctari505 in this forum) has mentioned before in at least one of his several excellent books that he also believes Kynoch and Ely Bros Pre-War ammunition probably all actually went about 150 fps slower than advertised.
That would then mean the excellent reputation enjoyed by the .416 Rigby was actually made with a 410 grain round nose, soft (aka jacketed soft point) or "solid" (aka full metal jacket) at about 2200 fps.

Myself being a wimp about recoil, the above theory is all I need to keep my velocity down a bit with the .416, just as you have been experiencing with.
Mine is a CZ (with a bit of minor modifications to my liking).

Yes Paul, I recall reading that about the early 416 ammo. I don't doubt it for a second!

My thought is that for my initial familiarization with the rifle, 2,200 fps or thereabouts is fully adequate. I won't start cranking it up until it is closer to time to perfect things.

Even then, I doubt I will go above 2,400 fps with a 400 or maybe 2,300 with the 430 Northfork. Just doesn't seem needed or even really beneficial (especially if it starts to affect one's ability to place a quick second round on target).
Captain of the Luddite Society
https://www.africahunting.com/threads/zimbabwe-hunting-the-bvc-in-zimbabwe-for-buffalo-john-sharp-safaris-exceeding-expectations.53046/

Tarbe I didn't realize that MO was under your Avitar ! Do you hunt deer there?

CAustin said:
Tarbe I didn't realize that MO was under your Avitar ! Do you hunt deer there?
Click to expand...

Even though my wife and I own and pay taxes on 281 acres, the state wants me to pay $200+ for a license because I am not technically a resident.

So in 5 seasons I have not hunted deer on my own land!
Captain of the Luddite Society
https://www.africahunting.com/threads/zimbabwe-hunting-the-bvc-in-zimbabwe-for-buffalo-john-sharp-safaris-exceeding-expectations.53046/

tarbe said:
Even though my wife and I own and pay taxes on 281 acres, the state wants me to pay $200+ for a license because I am not technically a resident.

So in 5 seasons I have not hunted deer on my own land!
Click to expand...

Yep Arkansas charges me $300. That being said if you need me to go over there and keep the deer population in check just let me know! White tail in MO are lots bigger than those in. AR.

The 4064 loads were great...I figured I could get away with a similar velocity level with the H414. Guess not!

Probably need to up the charge to get it to work, but that ends up defeating the purpose. 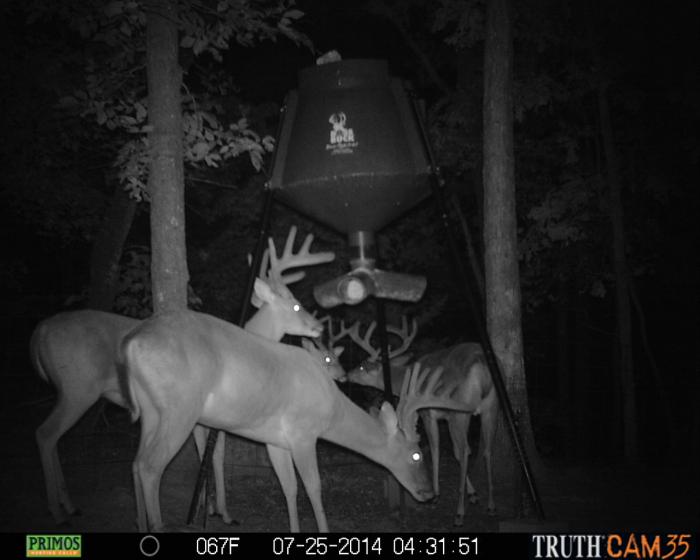 CAustin said:
Yep Arkansas charges me $300. That being said if you need me to go over there and keep the deer population in check just let me know! White tail in MO are lots bigger than those in. AR.
Click to expand...

We only have small deer in my part of Missouri. We are too close to the AR border!
Captain of the Luddite Society
https://www.africahunting.com/threads/zimbabwe-hunting-the-bvc-in-zimbabwe-for-buffalo-john-sharp-safaris-exceeding-expectations.53046/

Those are pitiful small deer. It's a shame your property has such poor genetic output. Being the good man that I am......I will come help your rid yourself of these critters. Just set the date and I will be there 300 win mag in hand to help out my fellow AH member. Shucks I'll even donate the meat to the food bank. 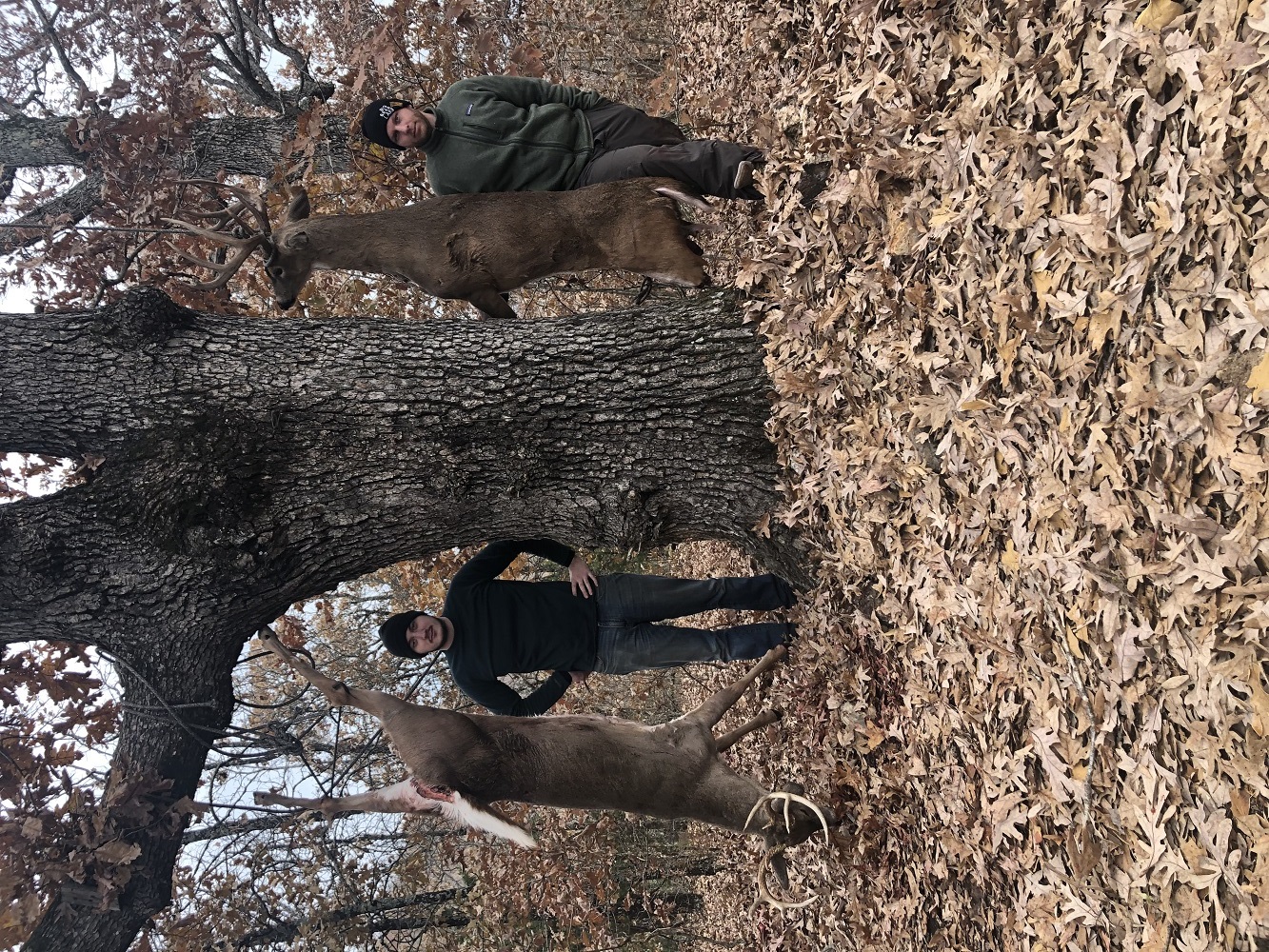 Captain of the Luddite Society
https://www.africahunting.com/threads/zimbabwe-hunting-the-bvc-in-zimbabwe-for-buffalo-john-sharp-safaris-exceeding-expectations.53046/
You must log in or register to reply here.

A Tale of Two Rifles