I'm really old school. I very much like the .44 special. I have two now, a Ruger Blackhawk w/ 5" bbl and a Smith and Wesson M 24 with a 4" barrel. They are both accurate, fun to shoot, easy to reload for (up and down the power scale) and a 240 grain, hard-cast SWC at a bit over 900 fps seems to work well. I like the 44 magnums, but I no longer own one. Some of the old gun writers like Skeeter Skelton used to wax enthusiastic about the 44 special, and I guess I'm a bit of a nostalgia buff.

Ravensview said:
.45 lc in a ruger Blackhawk
Click to expand...

I was tempted to get my Cowboy guns in .45 Colt but went with .44 WCF for semi-realism since the lever-guns were never made in .45 Colt, nor was my (Italian) Colt Lightning.
"I suddenly remembered my Charlemagne: 'Let my armies be the rocks, and the trees, and the birds in the sky.'"
B

I'm not a fan of 45ACP revolvers even though I've owned 2 or 3. Frankly, I don't get it. I love my 45ACP semi's but 45ACP in a revolver isn't very awe inspiring. Actually, it's rather dull IMO. If I'm going to go big in a revolver I might as well go BIG and nothing 45ACP is big enough.

.45Colt Ruger Bisley 5" built with Bowen parts. John Linebaughs recipe for hunting= 328grain lead Fp with H110 load. Enough for my wrists and most animals too. .
.41mag , recoil alot sharper due to different grip. Could be used for hunting too, very accurate.

I’ve always wanted a SW 57 with a 6 inch barrel. The 41 just sounds perfect to me.
But the only forty something I own is a 45 ACP.

I have never liked the 44 magnum, do not ask me why. I own one for Dirty Harry nostalgia and that is it.

For overall versatility, you cannot beat the 45 Colt in SA or N-Frame guise.

As far as upper limit of usability is concerned, I would say the 454 Casull. However, the recoil is too much for me in anything other than the Ruger SRH Alaskan.

A much more manageable big bore cartridge is the 50 Special made by cutting down 500 S&W to 38 Special length. 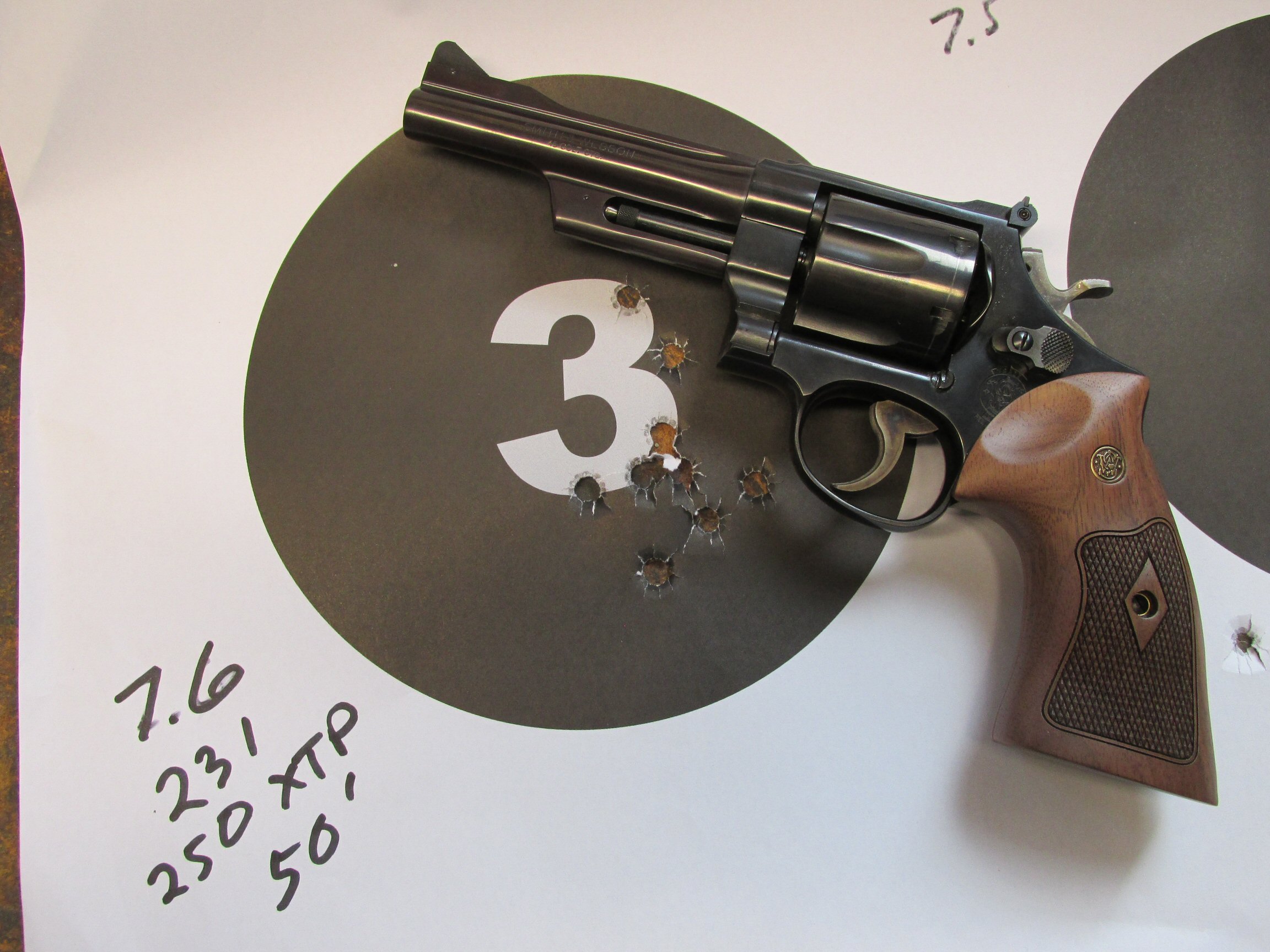 Bullthrower338 said:
For pure shooting enjoyment I have to go with the 41 magnum, if we are talking pure horsepower that doesn’t leave you dazed and confused but will stop most things that walk the earth It is hard to beat the 475 Linebaugh!
Click to expand...

Gotta love that .475 L. I haven’t taken anything but deer with it but as you stated, there is little you can’t hammer with it.

These days probably the 44 mag that I run through my lever action. H110 can give you some fairly hefty punch for hunting useage and a cast lead bullet with Unique gives a very soft plinking / practice load.

These days probably the 44 mag that I run through my lever action. H110 can give you some fairly hefty punch for hunting useage and a cast lead bullet with Unique gives a very soft plinking / practice load.
Click to expand...

I appreciate it is usually just 45 Colt

I understand,,, the Long thing is just a pet peeve of mine, as there is no such cartridge as the .45 Long Colt, never was. I know that a couple hundred years ago as the story goes, the Long thing supposedly got started to differentiate between it and the shorter .45 Schofield, as in, "gimme a box of the long ones", but still it never existed as such, and about the guns found so marked will be either foreign or from Gary Reeder, the custom maker. No Colt or Smith will be so marked from the factory.
R

On a Colt its 4 clicks. I know the early Rugers were the same basic mechanism and if you go slowly you may hear 4 clicks there as well.
R

I wasn't counting the click of the cylinder lock.

The old 3 screw with the 3 position hammer.

First one pulls the hammer off of the firing pin

Second position to be able to rotate the cylinder

And finally the third position to fire.

But you can hear that fourth one if you go slow


I have a few
If you don't care where you are, you are not lost.

ldmay375 said:
Super Redhawk Alaskan, 480 Ruger.
I am anxious to try this little fellow. Hopefully within the next few days, I will be able to shoot it some.

My thoughts and prayers are with you, that looks like a real ass-kicker of a load.