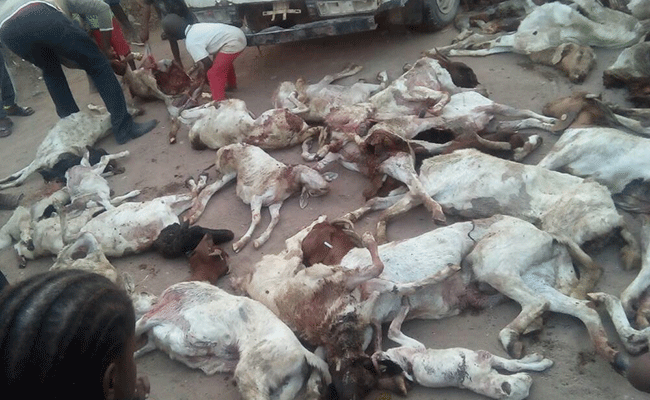 AFTER losing 86 small livestock worth about N$150 000, Kunene communal farmer Samuel Gawiseb can expect state compensation of only N$20 000, based on the figures stipulated in the 2009 national policy for human-wildlife conflict.

Although the policy is under review and scheduled to be debated in parliament at the end of this month, the ruinous damage caused to Gawiseb's flock last Wednesday by a pride of lions comes at an awkward time.

The attack took place at Awantapos in the Torra Conservancy, where, according to neighbouring farmer Anthony Dawids, the herder was alerted to the presence of lions when the dog started barking.

When he saw what the commotion was about – a pride of lions around the kraal – he retreated to his house for safety reasons.

The lions managed to get into the kraal, and killed nearly all the goats and sheep, as well as the dog. Only 13 kids survived.

“He suffered a severe loss. It was his entire livelihood, and how does one take care of the kids when the mothers are dead?” Dawids asked.

He added that Gawiseb was in the process of modifying his kraal into a modern design, which would have had an 80% success rate in deterring lions from entering the kraal.

“Unfortunately, he was not done when the lions came. We are challenged here with these predators, and the impression is that the government and other organisations which deal with lions and human-wildlife conflict are not working hard enough to help,” Dawids lamented.

He said there are between 100 and 150 lions in Kunene, and plans are to collar them so that their movements can easily be tracked.

“The collaring is, however, not taking place anymore. I don't think this pride was collared,” he observed.

#Aodaman Traditional Authority chief Petrus Ukongo said the fence at Etosha was down at some places, resulting in many lions straying into communal areas.

He said this had been reported to the authorities, but nothing was done, “perhaps because leaders are not affected”. It is not only lions that threaten communal farmers. Hyenas and leopards are also known to attack livestock there.

Gawiseb was at Walvis Bay over the weekend, but attempts to meet him were unsuccessful.

Questions were also forwarded to environment minister Pohamba Shifeta, who in turn referred them to the public relations officer Romeo Muyunda, who did not respond.

Communal farmers in Kunene are frustrated by the damage, injuries and deaths caused to their livestock by wild animals.

Daure-Daman deputy chief Zacharias Seibeb recently said traditional authorities will never want to eradicate wild animals, but believe that the numbers should be reduced to manageable levels. He also called for compensation for livestock killed and crops destroyed by wildlife to be increased.

“Livestock farming is the backbone of people in this area, and so compensation should be fair,” he stressed.

He likewise called for a swifter response from the Ministry of Environment and Tourism in the event of conflicts.

Elephants and lions cause most conflict in the region. The pachyderms destroy crops and houses, as well as water infrastructure, while lions prey on livestock.

The communities also have problems with leopards and hyenas.

According to Dawids, hyenas have reduced the donkey population significantly in Kunene, while leopards can kill an entire kraal of livestock, just to take only one to feed on.

The National Council tasked a standing committee in May to consult communities on human-wildlife conflict; to check compensation or lack thereof for the loss of human life; damage to property by wild animals; and the role of the environment ministry in mitigating and managing conflicts.

The aim of the consultations was to justify possible amendments to the 2009 policy.