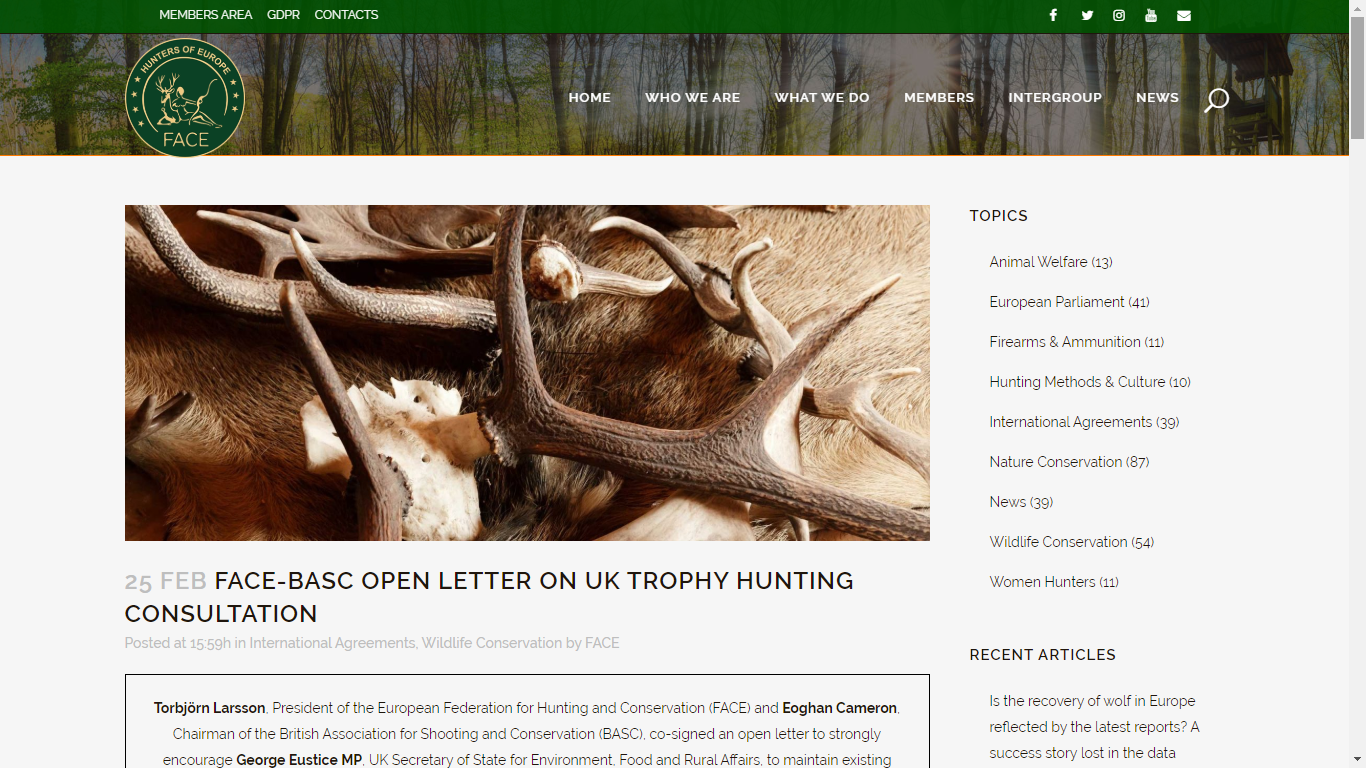 Torbjörn Larsson, President of the European Federation for Hunting and Conservation (FACE) and Eoghan Cameron, Chairman of the British Association for Shooting and Conservation (BASC), co-signed an open letter to strongly encourage George Eustice MP, UK Secretary of State for Environment, Food and Rural Affairs, to maintain existing internationally agreed regulations related to controls on the import and export of hunting trophies.


We publish the full letter below

FACE represents the national hunting associations from 37 countries in Europe, and the collective interest of Europe’s seven million hunters. Since 1977, FACE has been a highly respected international non-governmental organisation recognised by the European institutions in all matters related to hunting, wildlife management, animal welfare, and the representation of hunters’ legitimate interests. We are a long-standing member of the International Union for Conservation of Nature (IUCN) and actively participates as an observer to all major nature conservation conventions/agreements including the Convention on International Trade in Endangered Species of Wild Fauna and Flora (CITES), the Convention on Biological Diversity, the Convention on the Conservation of Migratory Species of Wild Animals, the Agreement on the Conservation of African-Eurasian Migratory Waterbirds, and the Bern Convention.

ASC is the largest shooting organisation in the UK representing over 156,000 members. Our vision is to ensure a guaranteed future for sustainable shooting sports in all their diversity as a widely enjoyed and important part of the environment, economy and culture. Our members partake in a range of shooting sports including gamebird shooting, wildfowling, pest control and deer stalking. Around 15,000 of our members are active deer stalkers who are responsible for the management of a large proportion of the deer population throughout Britain. BASC’s overall position on trophy hunting is that BASC supports the sustainable harvest of wildlife in the UK and overseas and the import and export of trophies arising from such harvesting where they are clearly proven to be from a sustainable source; noting that well-regulated trophy hunting programmes play an important role in delivering benefits for both nature and people.

Conservation disbenefits of restricting the import/export of hunting trophies:
We wish to highlight that well-regulated hunting benefits species conservation; it supports habitat restoration and benefits local economies and communities. Many respected scientists agree that hunting benefits conservation. Indeed, the IUCN*, amongst others have provided ample scientific evidence** of the value of trophy hunting to the conservation of threatened species and ecosystems across the world. These studies and materials show, hunting—including so-called ‘trophy hunting’—provides benefits for the species hunted, conserves a vast amount of land for wildlife habitat, directly funds anti-poaching efforts, encourages local community participation in conservation, supports livelihoods, and significantly contributes to rural economies. Because of these benefits, many species are doing very well in the countries such as those in southern Africa that embrace hunting as a form of sustainable use.

Increased trade restrictions or prohibitions by the UK would risk diminishing these benefits. Further, hunting in many southern African countries is the only source of wildlife management funding where photographic or eco-tourism is not a viable option. If Defra’s intent is to encourage conservation, rather than simply implementing whichever option is the most popular to extremely well-financed anti-hunting groups, then restricting the trade in hunting trophies will not achieve that intent.

The importance of evidence:
Evidence should drive this decision, not emotion. Moral opposition to hunting or misinformed opinions that hunting is unethical are irrelevant to practical wildlife management. Defra’s decision-making should be based exclusively on evidence and informed by existing internationally agreed policy/legal frameworks, like CITES as well as species biological factors, and successes exhibited by national conservation programmes. Taken together, these factors reflect the positive impact of well-managed hunting for wildlife recovery and conservation. Weighing the empirical evidence of well-managed hunting should be the primary focus in a such a decision.

What is a trophy?
For hunters in the UK and all over the world, a trophy is a memento of a hunt. It can be a pin feather taken from a Woodcock, the antlers of a good Scottish Red Stag or an Impala taken in South Africa. It is an important aspect of hunting, and one that can have an economic value. The UK has benefited from sustainable hunting tourism for many years, often due to the fact that trophies are frequently taken as a memory of successful hunts in the UK by overseas hunters.

We also question the need for this consultation based on the premise that regulated hunting or ‘trophy’ hunting is a driver of species extinction. By definition, trophy hunting is highly selective, regularly resulting in the harvest of older animals that have already contributed to genetic diversity of its species (e.g. a post-reproductive Red Stag), and used to achieve management goals, such as biological carrying capacity. And, as demonstrated in the links below, regulated hunting generates incentives that contribute to the conservation of habitat and wildlife populations. Furthermore, the movement of hunting trophies is also well-regulated and monitored to ensure sustainable offtakes.

Consult experts:
FACE and BASC encourage Defra to firstly review the scientific evidence including the links provided in this letter regarding the integral role trophy hunting plays in conservation. We recommend that Defra decision-makers take no action to further restrict trade in hunting trophies without first consulting with experts and community representatives from the countries whose wildlife management programmes will be affected. Therefore, we strongly advise Defra to invite representatives from those countries to the UK to share information about their conservation programmes, the role that hunting plays in those programmes and the harms that ban on the export of hunting trophies could cause. We further encourage you to visit those countries to personally witness their successful conservation programs.

Finally, we wish to highlight that trade in hunting trophies is already well-regulated, and Defra should maintain those existing controls. Increased restrictions or prohibitions will do nothing to benefit wildlife conservation and would reduce conservation efforts in areas that rely on hunting to incentivise and fund those efforts.

** https://www.conservationfrontlines.org/2019/10/trophy-hunting-bans-imperil-biodiversity/
You must log in or register to reply here.