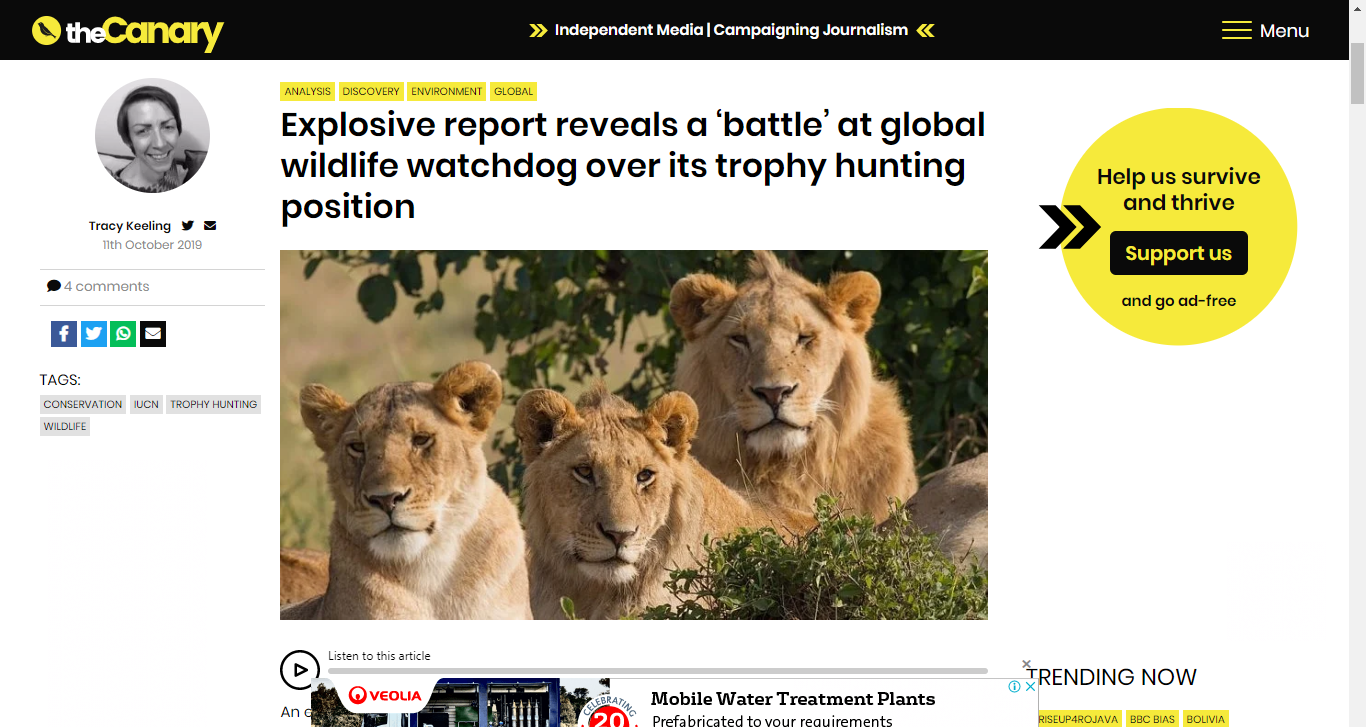 An explosive report by an ethics committee for a global wildlife watchdog reveals a “battle” over its position on trophy hunting.

The 2017 report, which has received renewed interest recently, was written by the International Union for Conservation of Nature’s (IUCN) World Commission on Environmental Law (WCEL) Ethics Specialist Group (ESG). In a recent clarification on WCEL ESG’s findings, the IUCN refers to it as an “opinion”. It explores “the ethical acceptability of trophy hunting according to current IUCN statutes”. Namely, it looked at whether admitting pro- and anti-trophy hunting groups as members of the IUCN aligns with its ethical position.

The IUCN WCEL ESG concluded it does not.


The IUCN
IUCN is one of the world’s most influential organisations in the field of conservation policy and practice. As its website explains, it is “a membership Union uniquely composed of both government and civil society organisations”. The global community entrusts it with helping to set standards that safeguard the natural world. The Convention on International Trade in Endangered Species of Wild Fauna and Flora (CITES) also does the same.

The IUCN says it “does not have a position on trophy hunting”. But the organisation’s Species Survival Commission (SSC) has created “guiding principles” on the use of trophy hunting as “a tool” for conservation. The SSC Sustainable Use and Livelihoods Specialist Group (SULi) has also created a briefing paper on the issue which uses a number of case studies to present the argument that:

" while there is considerable poor practice in trophy hunting and a strong need for reform, well managed trophy hunting can – and does – positively contribute to conservation and local livelihoods in the face of intense competing pressures on wildlife habitat and widespread poaching " ​

In a policy statement on the ‘sustainable use of wild living resources’, the IUCN further states:

" Both consumptive [such as trophy hunting] and non-consumptive use of biological diversity are fundamental to the economies, cultures, and well-being of all nations and peoples. " ​

As such, the IUCN currently accepts both pro- and anti-trophy hunting organisations as members. And these members help formulate IUCN policy. IUCN SSC SULi chair Dilys Roe told The Canary in April that:

" IUCN policy is based on decisions made at its World Conservation Congresses by IUCN Members "
​
The SSC and the WCEL are made up of experts in their respective fields offering their knowledge and services to the IUCN on a voluntary basis.

The report
The WCEL ESG looked at whether having these groups as members is compatible with the organisation’s objectives and ethics. The IUCN Secretariat asked it to do so in 2017, in response to the application of the International Fund for Animal Welfare (IFAW). The WCL ESG report highlights that the IUCN’s overarching objectives are:

" to influence, encourage and assist societies throughout the world to conserve the integrity and diversity of nature and to ensure that any use of natural resources is equitable and ecologically sustainable. "

​
Furthermore, it discusses the variety of resolutions passed by the IUCN that relate to its ethical guidance. These include Resolution 3.022, which recognises the Earth Charter as “an ethical guide for IUCN policy”, and Resolution 004, which established the Ethics Mechanism.

Both the Earth Charter and the IUCN’s Biosphere Ethics Initiative (highlighted in the Ethics Mechanism) place a high importance on the integrity and diversity of life and champion a relationship between the Earth / biosphere and humans that involves love, compassion, respect, and solidarity. They also call for a precautionary approach to environmental protection when faced with scientific uncertainty.

The WCEL ESG report touches on the non-consensus and dispute over trophy hunting’s impact on conservation and its validity as a ‘sustainable use’ of wildlife. For example, it links to an article that it says provides “evidence that trophy hunting causes populations of African lions to decline”. It links to another that it says shows “as little as 3% of the income for trophy hunting actually reaches local communities” in Zimbabwe. But it primarily concerns itself with the ethical dimension of the IUCN’s implicit position on trophy hunting, shown through its membership practice and published materials on the subject.

The report also notes that, according to the IUCN’s own criteria, the “objectives and track record” of potential members have to “embody” to a “substantial extent” the same overarching objectives as the IUCN.

“Prima facie inconsistent with IUCN’s objectives”
On the IUCN materials and the objectives of pro-trophy hunting organisations, WCEL ESG asserts:


" the ‘Guiding Principles’ and ‘Briefing Paper’ are insufficient to serve as a guide for a decision on the eligibility of organizations supporting trophy hunting. Instead, the objectives of such organizations are prima facie inconsistent with IUCN’s objectives. "​
It concludes:

" Trophy hunting is not consistent with “sustainable use”. And even if it were, “sustainable use” is not the sole criterion for the decision on eligibility of organizations seeking IUCN membership.

The critical question is whether trophy hunting as it is practiced by individuals and promoted by certain hunting organizations may be consistent with IUCN’s general objectives… This is clearly not the case. Any other view would threaten IUCN’s credibility for providing moral and ethical leadership in conservation policies. It would certainly undermine the many efforts of IUCN members to promote a just and sustainable world. "
​
The WCEL ESG chair Klaus Bosselmann also told
The Canary
that the “battle” on this issue is essentially between WCEL and SSC. He added:

" The IUCN Council has continued to approve applications from both, pro- and anti-hunting organisations which by implication means that IUCN continues to support trophy hunting. "

​
Response
SSC SULi responded to the report. It accused the report of containing “a number of inaccuracies, misunderstandings, use of “straw men”, selective use of references, and generalisations”. It also reiterated its briefing paper position, that “well-managed hunting programmes” can benefit wildlife and communities. Furthermore, it said [p20]:


" Despite IUCN’s fundamental rationale as a nature conservation organisation, the basic thesis of this document is that IUCN should reject the use of trophy hunting to achieve conservation on the basis of an unclear and subjective ethical analysis, which considers an undefined quality of this hunting intrinsically wrong regardless of its outcomes for conservation, and which does not consider the experiences, cultures and wishes of those countries where hunting is taking place. "​
You can read SULi’s full comments here, along with WCEL ESG’s reaction to them. It took issue with SULi’s “tone and highly opinionated (rather than reasoned) approach and stress[ed] that an ethical discourse is about finding normative and ethical truths based on mutual respect”. "

The Canary approached the IUCN Council for comment. It responded by directing us to the report’s supporting materials and a recent statement on the matter. That statement reads:


" On 27 September 2019, a 2017 opinion by the IUCN World Commission on Environmental Law (WCEL) Ethics Specialist Group was reposted in the news section of the IUCN website, and was misconstrued as a new IUCN report by many. The document is not a new IUCN report, but in fact one of several positions presented to the IUCN Council in November 2017 for its deliberations on the admission of the International Fund for Animal Welfare (IFAW) as an IUCN Member. Having considered all facts presented as well as IUCN’s Policy Statement on Sustainable Use of Wild Living Resources, IUCN Council recommended admitting IFAW as an IUCN Member at the November 2017 meeting.

The 2017 WCEL Ethics Specialist Group opinion does not therefore reflect IUCN’s overall position; it aimed to assist IUCN Council in its deliberations. "​
Ethical questions
Meanwhile, one pro-trophy hunting organisation is quite open about what it achieves while in a position of influence at wildlife watchdogs. Conservation Force (CF) – a trophy hunting advocacy group – is an IUCN member and has official observer status at CITES. It has charitable status and brands itself as “A Force for Wildlife Conservation”. Its website contains a bio for its president John Jackson, who says CF contributes “one million dollars each year for on the ground conservation in range countries”. One section titled “CITES expert” explains that Jackson attended “”CITES CoP [Conference of the Parties] 8 through 17” and served on “on dozens of CITES Working Groups”. Among the list of his “Leadership, Successes and Achievements” in this CITES section are:


" Lead the defeat of the Kenya proposal to list all African Lion on Appendix 1 of CITES [Appendix I of CITES “lists species that are the most endangered”].

Successfully spearheaded the downlisting of the Canadian Wood Bison from endangered.

The Canary contacted CF for comment. None had been received at the time of publication.

This report argues that the involvement of such groups or linked individuals in IUCN raises ethical questions. It’s difficult to see how WCEL ESG is wrong.

Cheetah Hunting - Did You Know