Ionides called it the mountain bushbuck, when he hunted the animal in 1942 in his quest for the rarest African trophies. Buxton, who in 1908 brought home to England the first specimens, was not aware that he had actually collected a new species of spiral horned antelope. Lydekker of the South Kensington Museum in London, who examined Buxton's specimens, noticed it and called it at first spotted kudu, but named it some years later the mountain nyala, a name which stuck up to now, despite some attempts to come up with a more fitting name.

Recent DNA analysis shows that among the Tragelaphidae, the spiral-horned antelopes, the mountain nyala is only remotely related to the southern nyala, despite the apparent resemblance of the males. It is actually closer to bushbuck and sitatunga than to the other members of the Genus.

The mountain nyala is found only in some mountain ranges east of the Ethiopian rift valley. It lives on high altitudes and requires specialized habitat. 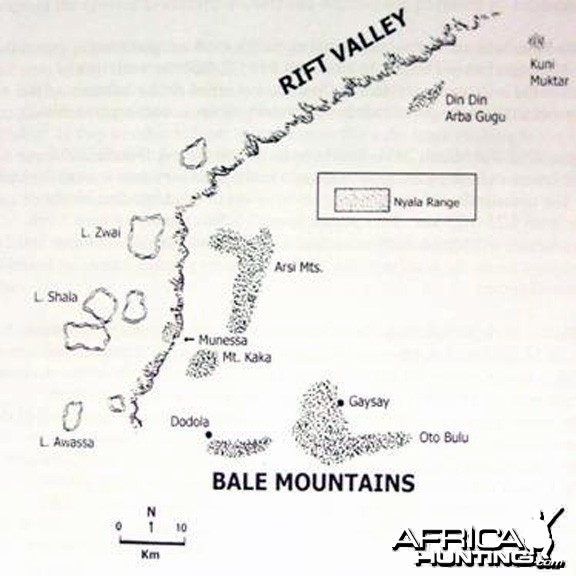 Its habitat is shrinking due to human pressure, with the possible exception of the areas around Bale and Dodola. The mountain nyala is rated as endangered by IUCN, due to its limited range and the human encroachment that is the main threat to the species.

Due to successful conservation measures mountain nyala can nowadays easily be observed in and close to the northern part of Bale Mountains National Park. Around headquarters at Dinsho there is a fenced enclave of one square km that contains an incredible density of at least 120 nyala. This is possible only because the fence is jumped by the nyala to feed outside on farm land, where the people seem to tolerate them. Close to Dinsho outside headquarters nyala densities are also very high and the visitor to Bale can be sure to observe them from the main road in the mornings and afternoons. 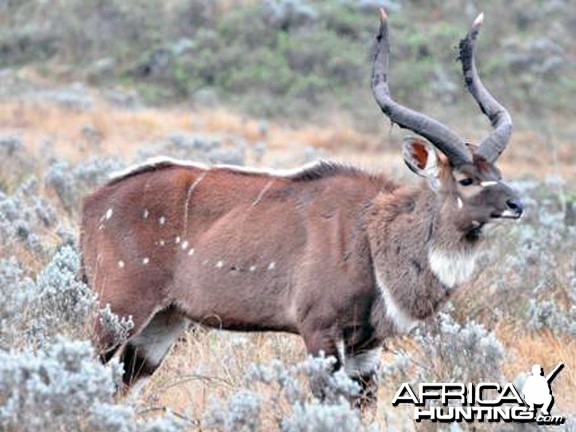 Ethiopia offers hunting to foreign sport hunters. Since the 1970ies the wildlife of the country has experienced serious and partly disastrous declines, but there are also some recent success-stories, like the substantial increase in numbers of walia ibex and Swayne's hartebeest, but also of mountain nyala.

The country harbors a number of interesting huntable species, true endemics like the Menelik's bushbuck, which is found in the same habitat as the mountain nyala, and å¡—unting endemics (species that can only be hunted in Ethiopia, even though they exist elsewhere) like the Beisa oryx, Soemmering's gazelle, Salt's dikdik, white-eared kob, Nile lechwe. 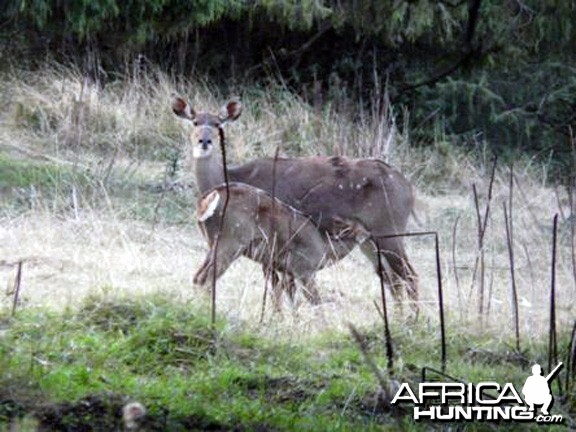 But the main attraction is the mountain nyala. As most of the hunting concentrates on this species, its status has become a bone of contention among conservationists and administrators. Paul Evangelista estimates the numbers to be above 4,000. (Evangelista, P., P. Swartzinski and R. Waltermire. 2007 é„­ profile of the mountain nyala Tragelaphus buxtoni in African Indaba, 5(2). Others estimate less, but the Evangelista-research seems to be the most thorough one.

The hunting quota for mountain nyala is presently in the range of 35 to 40 per year, which means around 1 % of the population. This is very conservative given the propensity of the mountain nyala to sustain high densities when properly protected. However, poaching is a problem and accounts certainly for much more nyala killed than through sport hunting. 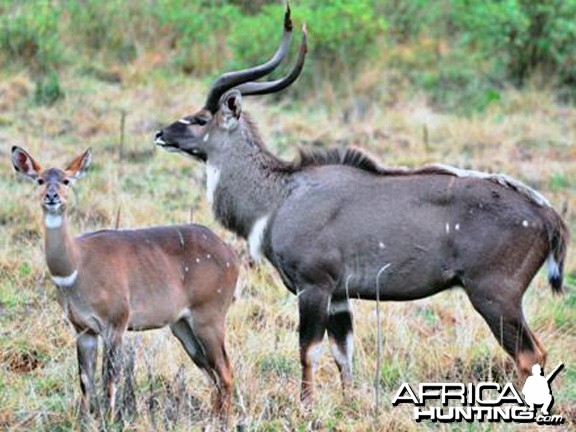 The price of a safari is in the range of 75,000 US$ minimum, and success is not guaranteed, as nyala are notoriously shy where persecuted. The trophy fee has recently been increased by the Ethiopian Wildlife Conservation Authority from 5000 $ to 15,000 $, which makes it by far the most expensive African antelope.

The mountain nyala is not under immediate threat of extinction, but close monitoring of habitats and numbers is necessary to avoid irretrievable damage to habitat and populations. Hunting can provide the incentive for better protection and habitat restoration, but mechanisms have to be in place to make sure that the funds generated are actually used in the nyala ranges, especially by the communities where this magnificent animal lives.
Last edited by a moderator: Dec 1, 2016
Gerhard R Damm
AFRICAN INDABA - Dedicated to the People & Wildlife of Africa 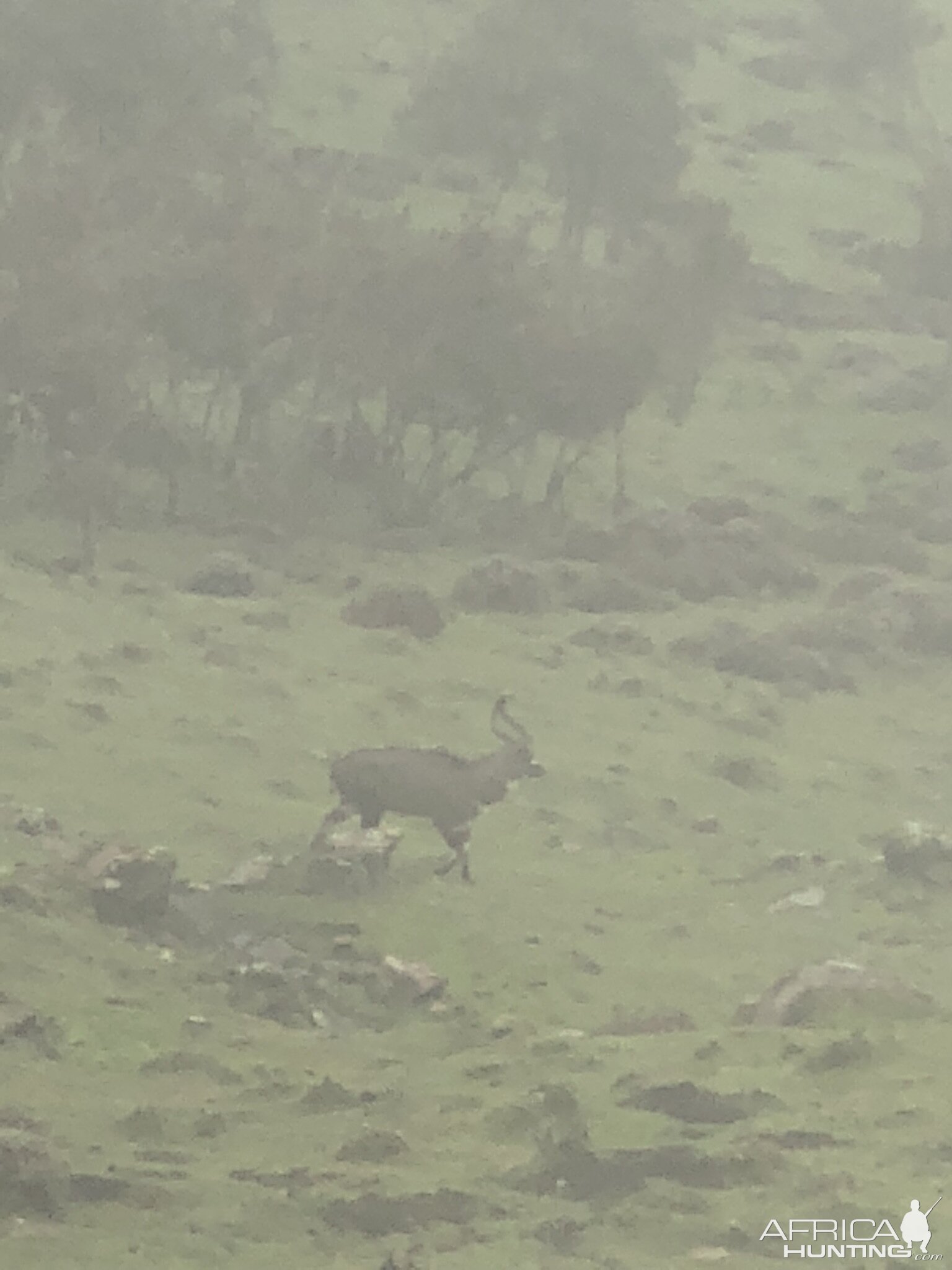 Population Estimates Of Mountain Nyala On The Rise

A profile of The Mountain Nyala Tragelaphus buxtoni