WINDHOEK – Stray lions in Kaokoland that recently escaped from the Etosha National Park managed to kill 19 goats in one night, leaving one livestock farmer in the area financially devastated.
Apart from the nearly two dozen goats that were killed in one kraal in the Sesfontein Constituency, other farmers in the Kunene Region also lost cattle and sheep in recent weeks due to the lion attacks.
Spokesperson of the Ministry of Environment and Tourism, Romeo Munyunda, has confirmed the incident, adding that his ministry is currently monitoring the movement of the lions via satellite.
“A total of 19 goats were killed and on different nights, a number of sheep and cattle were also killed by two lions at farms near Opuwo in the Kunene Region”, said Muyunda.
He could, however, not give the exact number of lions that had escaped from the national park.
Muyunda further noted that the ministry will investigate the matter to determine the small-scale farmer’s loss in monetary terms, which could be well over N$50,000, but he has in the meantime, urged the farmers to meet the ministry half way by making sure that their livestock are kept safe in kraals.
Tammy Hoth, Director of the AfriCat Foundation, said that the human and wildlife conflict has boiled over and has over the years become a serious problem in the country and that an urgent solution was needed.
She added that after the AfriCat Forum received information of the lions running loose in the area and before the latest livestock killings, the farmer who lost his goats was advised to make adjustments to his kraal to prevent lions getting in, but that he failed to do so.
According to Hoth, while it is not common, lions have been known to kill livestock in large numbers without consuming the carcasses.
“A lot of times, we find that this happens when the mother lions are teaching the cubs how to hunt and as a result, a lot of livestock is killed in one attack and the carcasses are left unconsumed,” explained Hoth.
Hoth further noted that in some instances, lions will leave carcasses unconsumed after noise or people disturb their hunt, but that it is not unusual for the lions to return to the same kraal later on in an attempt to consume the abandoned carcasses.
Hoth, who is currently patrolling the Kaokoland area, says there are currently seven cubs on the loose with their mothers and that the forum visited numerous livestock farmers to alert them about the stray lions.
Opuwo Deputy Commissioner James Nderura confirmed that a case of loss of livestock was this week registered at the Ombaweejo village in the Sesfontein Constituency and that a similar case was last month registered at Marine-Höhe, a village situated a few kilometres from Kamajab.
In the case at Marine-Höhe, the goat carcasses were also left unconsumed. 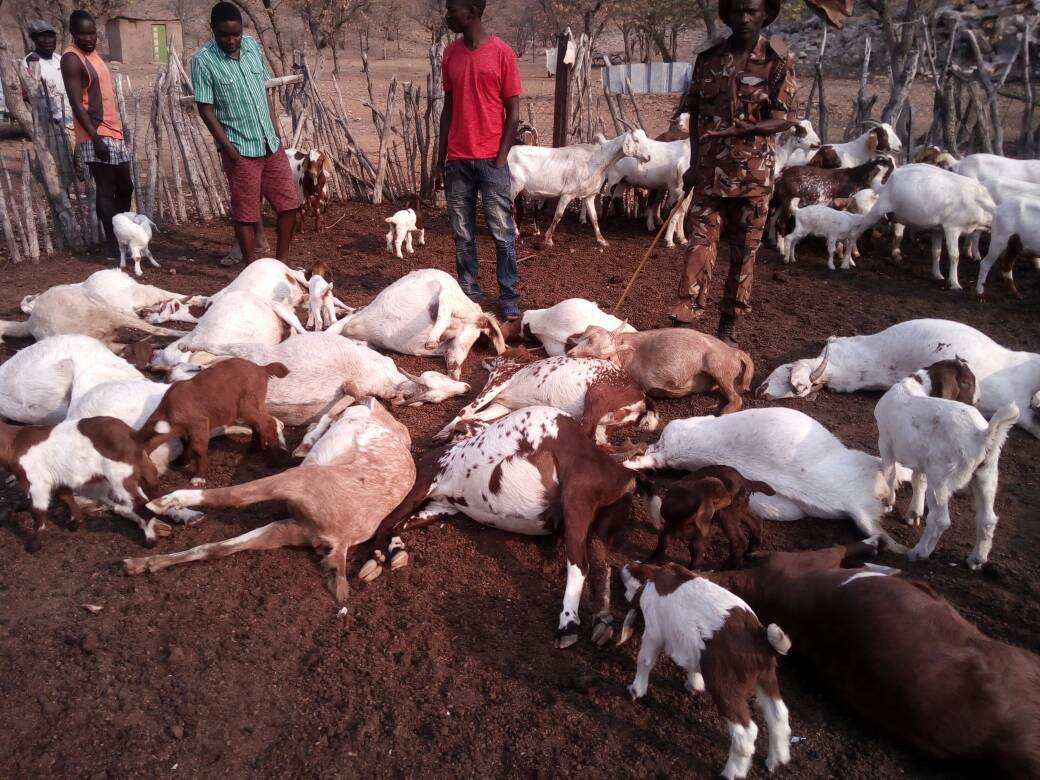 From the picture I would say the enclosure was more to keep goats in an not cats out!

There is no blood. Looks like the goats died from something else.
Keep on rockin' in the free world.
I have spent most of my money on women and hunting, the rest has been wasted.

Therack said:
There is no blood. Looks like the goats died from something else.
Click to expand...

Had the same thought...

The other picture does not even show puncture wounds from suffocation on the neck.

BRICKBURN said:
The other picture does not even show puncture wounds from suffocation on the neck.

And who is Africat? How are the farmers supposed to make a goat pen lion proof? How is the farmer to blame (as insinuated by the quite)
"When my friends tell me that I have led a remarkable life, I have to admit having done my best to make it so" - John Kingsley-Heath 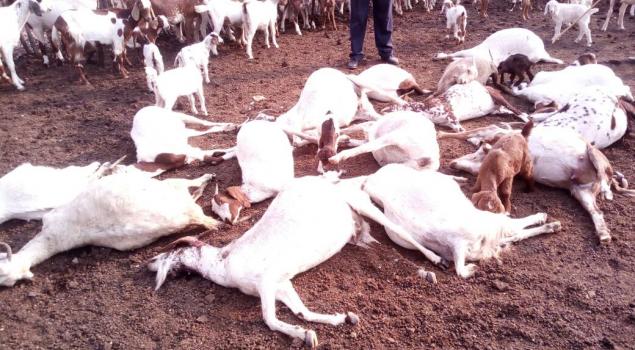 See any marks on the throat/necks. Lions learn to kill by suffocation or break the neck. (preferred method of the cat)

See any marks on the throat/necks. Lions learn to kill by suffocation or break the neck. (preferred method of the cat)
Click to expand...

N$50,000 / 19 goats would be over $175 USD each. Not sure what a goat is worth in Namibia, but $175 is probably around 4+ times market value. Wonder if there is a program to compensate farmers for lost livestock.
And here I am, returning to Africa of many faces;.... the sloe-eyed temptress with flowers in her hair who stole my youth and my heart, and left me an old man with a kaleidoscope of conflicting memories of many dashed hopes and some fulfilled dreams. E. Echols

It was The Ghost and the Darkness....

See any marks on the throat/necks. Lions learn to kill by suffocation or break the neck. (preferred method of the cat)
Click to expand...

Those necks look broken, but you are right, no skin injury! A sheep farmer up near Thunder Bay told me wolves teach the same way. But, the young wolves make a real mess of the sheep, and some survive and get chewed up badly. These particular lions seem to very fast learners
"When my friends tell me that I have led a remarkable life, I have to admit having done my best to make it so" - John Kingsley-Heath

They cleaned the goats up before the pictures, they didn't want to offend anyone with bloody pictures.

Or perhaps these lions didn't clean their teeth often enough and forgot their dentures and had to gum the goats to death.
If you don't care where you are, you are not lost.

Pheroze said:
Those necks look broken, but you are right, no skin injury! A sheep farmer up near Thunder Bay told me wolves teach the same way. But, the young wolves make a real mess of the sheep, and some survive and get chewed up badly. These particular lions seem to very fast learners
Click to expand...

A resource for ranchers to determine if their critters were killed or just being scavenged and akso killed by which critter.

Thanks, that is a very interesting read!
"When my friends tell me that I have led a remarkable life, I have to admit having done my best to make it so" - John Kingsley-Heath

It helps cut the bologna on the claims.
You must log in or register to reply here.