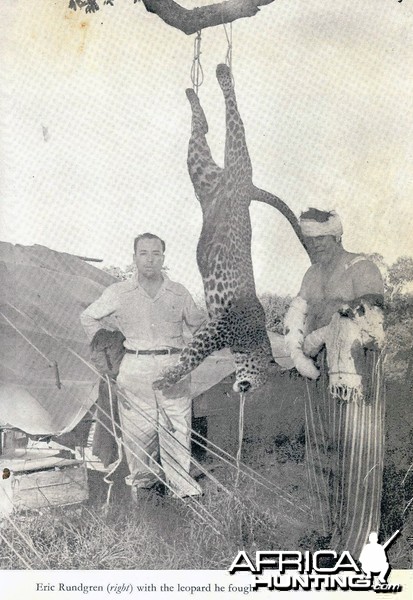 Eric Rundgren (right) the morning after with the Leopard that mauled him.

Eric Rundgren was born in England in 1918 , his father Ture Vladimir Rundgren was a Swedish & his mother Elizabeth was a Irish . He was seven months old when his parents shifted to Kenya, his father a native of Odensvi in Sweden was first among the early White Hunters in Kenya. Eric was one of the most experienced hunters of all time . He had shot more dangerous game than anybody else on earth . He never boasted about it but is a fact.

The Africans called him Mchangi meaning tiny colored beads , if the bead is dropped on the floor it may run around every where so was Rundgren Here, There & Everywhere. He had a very explosive nature & had a typical bad guy mystique.He was a tall well built man with piercing blue eyes, reddish hair & fair skinned. He stood under six feet in his shoes , and enjoyed smoking. 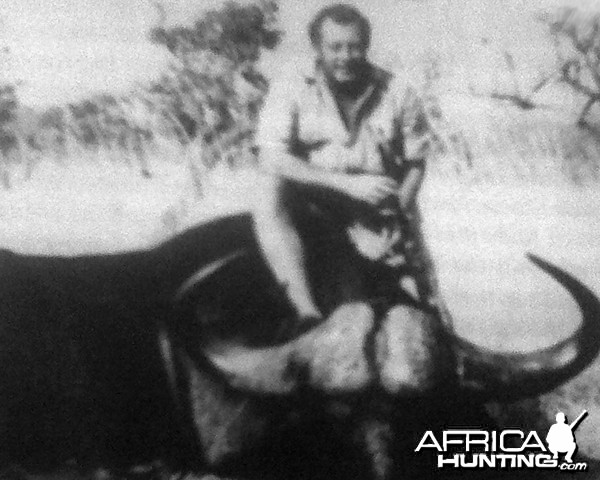 Ture Rundgren (Sweden), Eric's father went out shooting game on TANA RIVER. Eric started hunting at the age of 12. He worked as a junior forester with Kenya Forestry at Aberdares. Then to moved to MWINGA(Now Mt Kenya Safari Club) near Nanyuki. Between 1939-1944, he attended his share of War, then back at Nanyuki as a Control Officer for Game Department. He gets tossed by a buffalo into a stream. In 1945, he married PAT and had a son DONALD.

His career as a Professional Hunter was at his peak during the mid 50s & 60s.He was working for famous Ker & Downey Safaris. As a hunter Eric packed the testosterone in his cartridge belt , nothing could sway him when he was on the heels chasing a dangerous game . Eric had the extraordinary hunting instincts which were in him naturally . He was trained by another hunting greats and the bad boy of the hunting world Bror Blixen, who took him under his wings and was his godfather in professional hunting. His father & Blixen steered him into big game hunting. 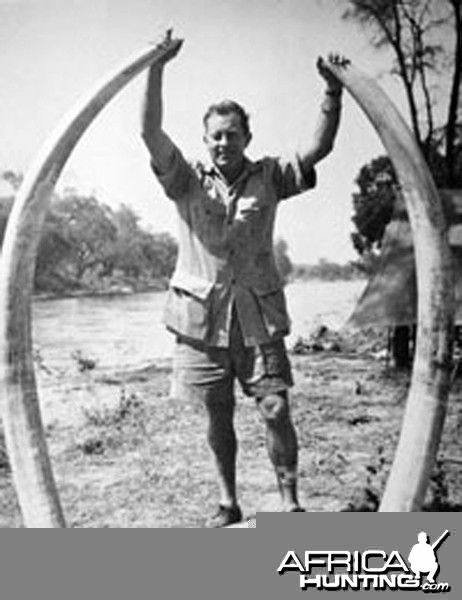 He used dogs to hunt buffalo and lions.A CHARGING LION GOES FOR MAN'S LEGS. At night the leopard (Spots) is bold, outrageous and deadly. Rhino has bad eye sight, not very good hearing, but good sense of smell. Rundgren gets an elephant with tusks of 178 and 174 pounds. At the age of 34, in 1952, he left the Game Department and takes up Safari Hunting, but gets mauled by a leopard and lands up in Nairobi Hospital, with left arm permanently weak.

He bought a farm at NARO MORU, east side of Mt Kenya. After selling the farm, he moves to KIKAMBALA for commercial fishing. Leaving fishing, he became White Hunter again and parted from PAT, his wife, moving back to Nairobi. Some women suffer from SAFARI HEAT and act strangely on safari. Eric marries HARRIET, who was once his client. In 1964, he left Kenya to start a safari business in Botswana. Then ERIC RUNDGREN NATURE CONSERVATION UNIT is formed in Northern Transvaal, South Africa, where he wanted to start photographic safaris.

In 1964 he left Kenya for Botswana & started his own safari company but did visit to East Africa with his clients for hunting safaris. He was a great hunter with instincts of a wild animal, a brilliant bush man and a man with wit to out wit the most dangerous of game. He was a legend of his own time.
Last edited by a moderator: Dec 8, 2016
You must log in or register to reply here.