Elephants Get a Reprieve as Price of Ivory Falls 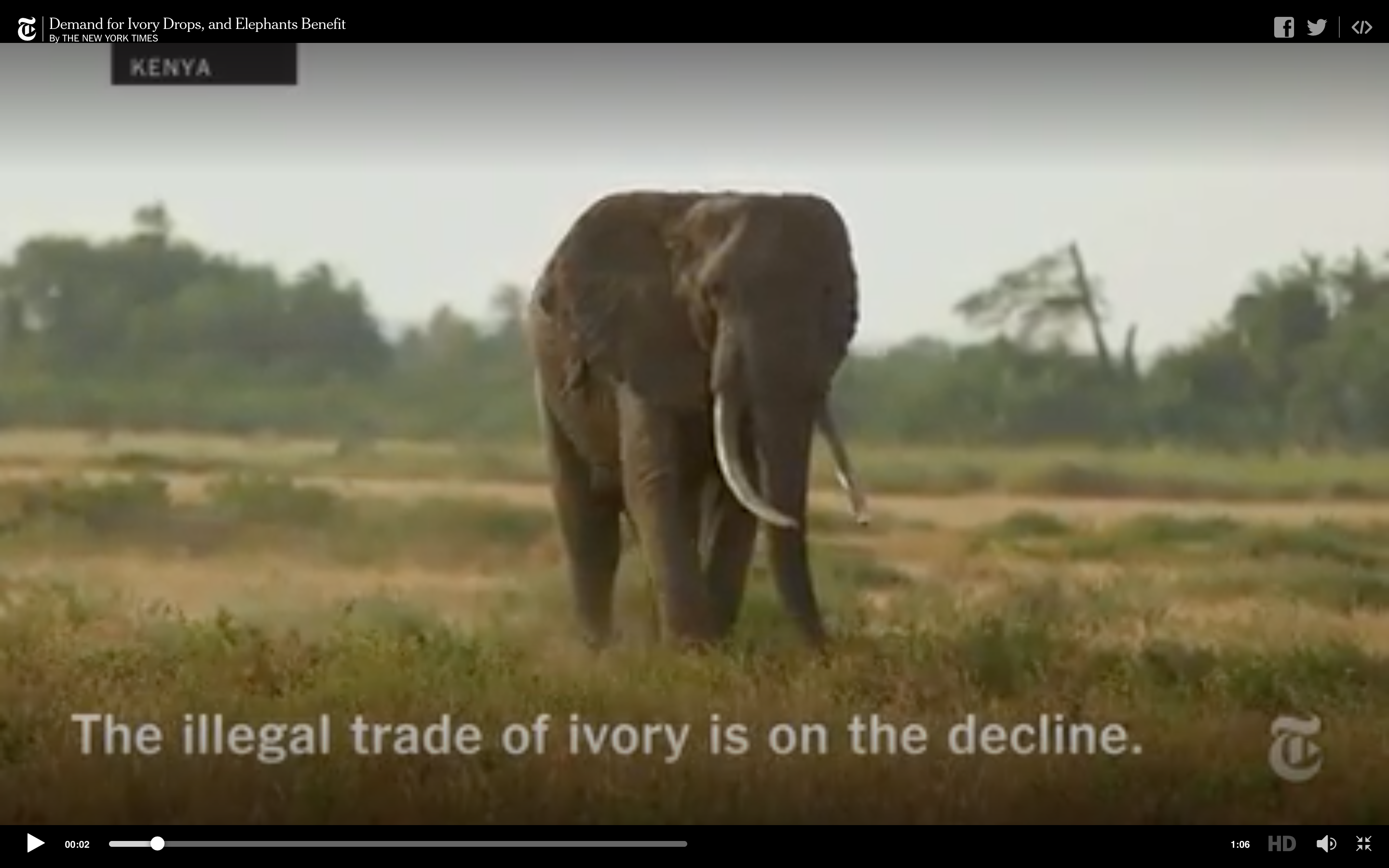 The price of ivory has dropped by more than half in the past three years. This decline may be good news for elephants that have been targeted for their tusks. By THE NEW YORK TIMES on Publish Date March 29, 2017. Photo by Dai Kurokawa/European Pressphoto Agency. Watch in Times Video »

The price of ivory in China, the world’s biggest market for elephant tusks, has fallen sharply, which may spell a reprieve from the intense poaching of the past decade.

According to a report released on Wednesday by Save the Elephants, a respected wildlife group in Kenya, the price of ivory is less than half of what it was just three years ago, showing that demand is plummeting.

Tougher economic times, a sustained advocacy campaign and China’s apparent commitment to shutting down its domestic ivory trade this year were the drivers of the change, elephant experts said.

“We must give credit to China for having done the right thing,” said Iain Douglas-Hamilton, president and founder of Save the Elephants. “There is still a long way to go to end the excessive killing of elephants for ivory, but there is now greater hope for the species.”

Elephants have been slaughtered by the thousands in recent years in what appeared to be an insatiable quest for ivory. Employing a wide range of tools, including helicopters, military-grade weaponry and poisoned pumpkins, poachers have brought down herd after herd. The poachers have also killed scores of wildlife rangers.

The tusks have been spirited out through a network of African gangs and corrupt government officials. A vast majority of ivory ends up in China, where a rapidly growing middle class has coveted it for bracelets, combs, statuettes and other status symbols. That demand has pushed the price of ivory so high that the tusks from a single elephant could be worth more than $100,000. That, in turn, encouraged many hunters and traders in Africa to ruthlessly pursue more elephants.

But the ivory boom may be over.

This may be a sign of how a sustained global advocacy campaign can actually work. For several years, celebrities, political leaders and passionate wildlife advocates around the world have been urging China to put a stop to its ivory trade. In China, there are officially registered shops selling ivory and a thriving black market doing the same. Last December, China responded, announcing it was shutting down all ivory commerce by the end of 2017. It seems the price of ivory has dropped in anticipation of the ban; many analysts believe it will soon drop further.

Researchers for Save the Elephants said the Chinese ivory business seemed depressed, with vendors pessimistic about their future. Many are replacing ivory jewelry and trinkets with items made from alternative materials, like clamshell. According to the report, China plans to shut ivory factories at the end of this month and close all retail outlets by the end of the year.

But there still seem to be some high rollers out there who want their ivory.

In one store in Nanjing, researchers saw “a 38-layered magic ball,” made from ivory, selling for $248,810.
Jerome Philippe, Founder of AfricaHunting.com

That, in turn, encouraged many hunters and traders in Africa to ruthlessly pursue more elephants.

They could not help themselves. They just had to say hunters.

This could utimately be bad for the hunters. They will proclaim a victory and then turn their sites to other prey.

I think if they got 40-50 emails explaining that the correct term to use is POACHER, not hunter, they will have to issue a correction and alter the wording of the article.
https://www.facebook.com/insanebowhunter/

Guess this is a wait and see. Still, sounds good for the elephants.
Thanks for the update.
Africa on my mind.

Maybe instead of saying 40-50 emails, I should have said 45-70 emails, lol.
https://www.facebook.com/insanebowhunter/
You must log in or register to reply here.

Zimbabwe may withdraw from CITES to sell $300m of ivory

China must not ban ivory trade