Received this incredible photographs by email from Claudio Delfabro from Italy who is holding these magnificent tusks... His email reads: Dear AfricaHunting, me over 55 year ago in Tanganyika. Saluti Claudio.

These tusks are the fifth heaviest pair on record. 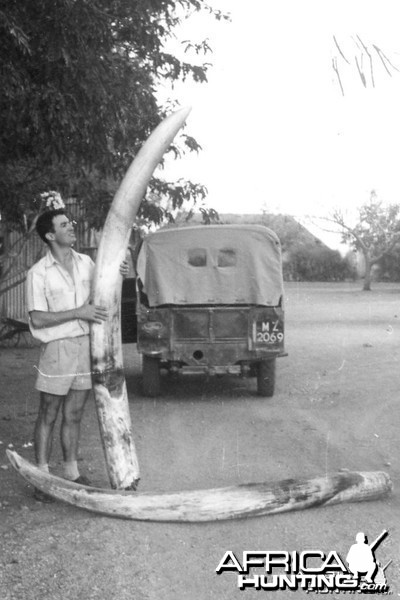 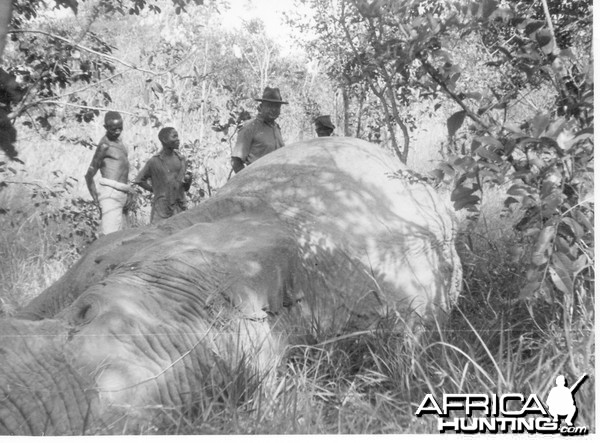 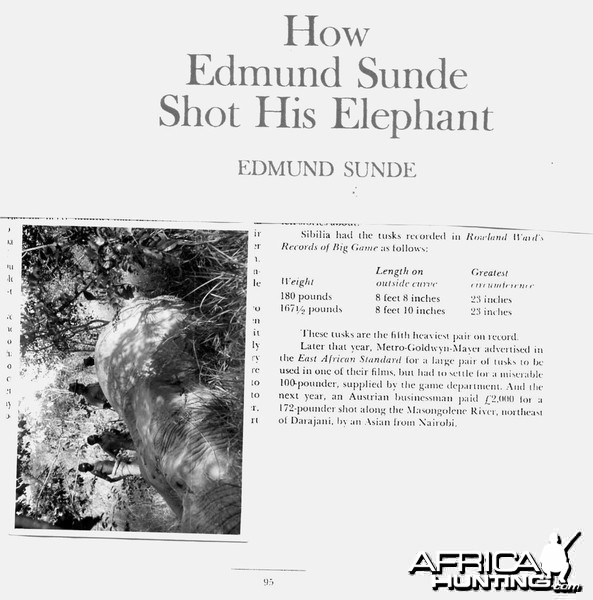 Here are a couple of pictures of Claudio Delfabro with Elephants that he hunted. These two photographs were also sent to AH by Claudio Delfabro. Thanks for sharing Claudio! 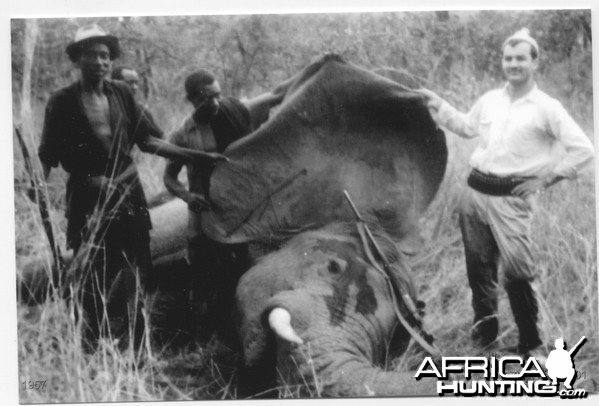 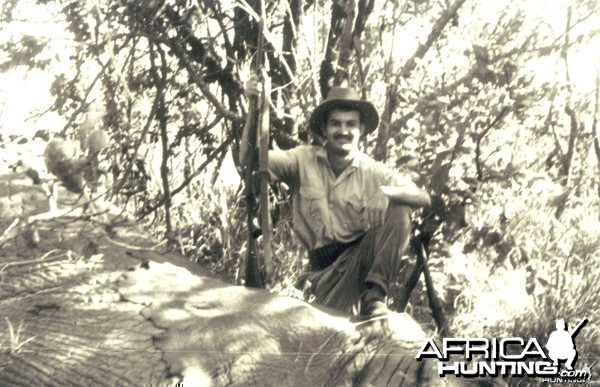 Claudio Delfabro writes: I am from Tricesimo (Udine) nord Italy Friuli close to Triest. I went to Tanzania (Tanganyica) for work in may 1953 and I stay to july 1961, I work in mine "Willianson Diamond LTD, Mwadui mine" Doc Willianson it was werry good person Canadian people, I pass werry nice time. 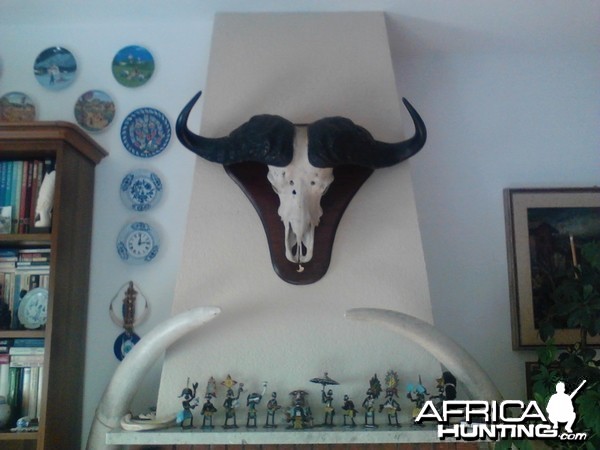 wouldn't those tusks make a fantastic entrance to the man cave thanks for sharing them mate
THE HUNTER; The person that pays over 90% of the cost for the presavation and maintance of wildlife and gets zero credit for it ................

A big one we found in Tsavo; 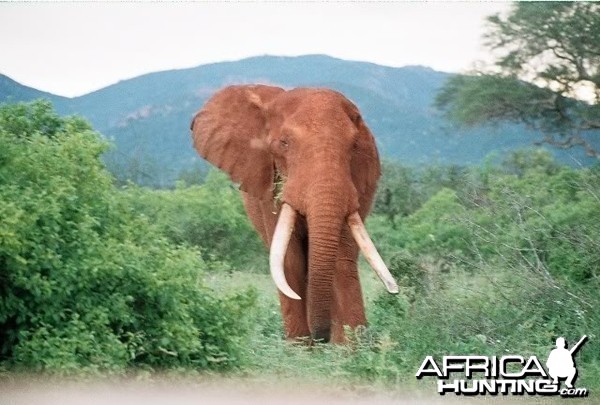 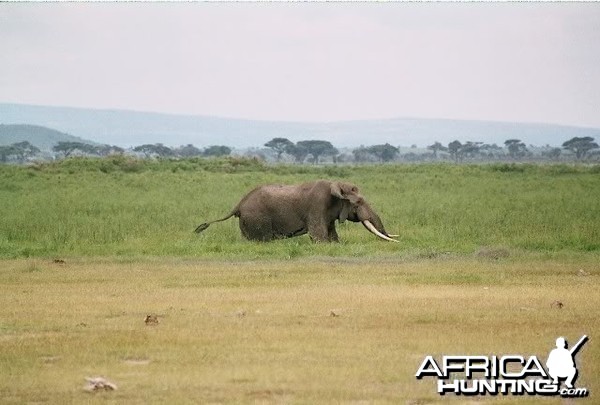 Just beautiful classicsafari... thanks for sharing.
Jerome Philippe, Founder of AfricaHunting.com
B

Leeukop Safaris said:
These are great Tuskers, but we do still have some good ones out there. The below picture was taken by a friend of mine (Dr. Wayne Matthews) who was the Ecologist in Tembe Elephant Park in Kwazulu-Natal for many years (I also had the privilage of working there for 5 years).

The elephant bull in the foreground unfortunately died last year (Induna) and his largest tusk weighed in at 125 pounds. The big bull in the background is even larger (Isilo) and is still alive, and I believe is the largest Tusker in Southern Africa at this time. They don't hunt on Tembe Elephant Park, as it is a government park, but it is good to know that there are still bulls out there with those "BIG Genes".

nice, thanks for showing us classicsafari
THE HUNTER; The person that pays over 90% of the cost for the presavation and maintance of wildlife and gets zero credit for it ................

really nice if you happen to have a spare pair hanging around send them to my place. Thanks for sharing.
Enjoy Life Now! It has an Expiration Date.

Whilst not massive, here is a crop raider I shot a few years back. Rifle was a 470NE. 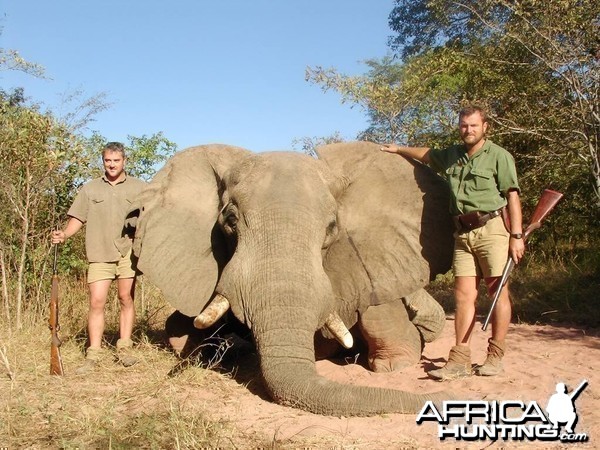 It was a Merkel. 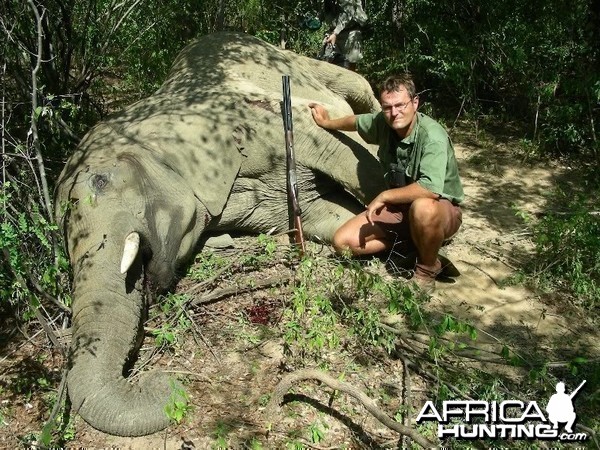 The VC is "dressed up" neater but the Merkel is good value.

Some beautiful elephant art/paintings for the man cave.... 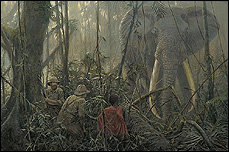 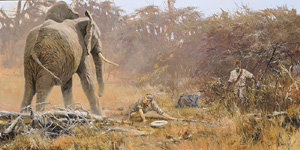 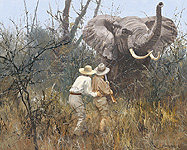 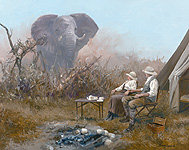 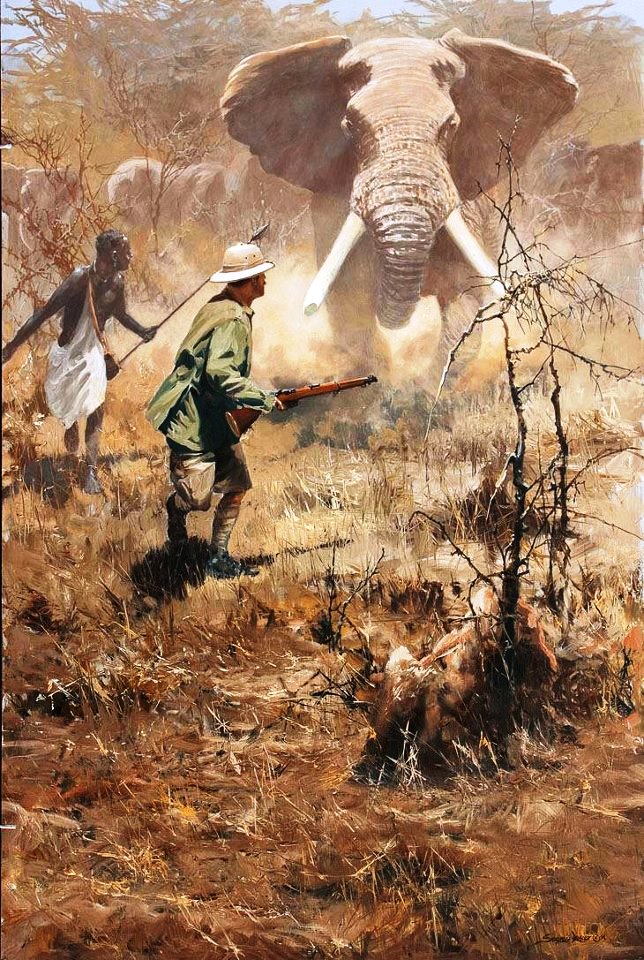 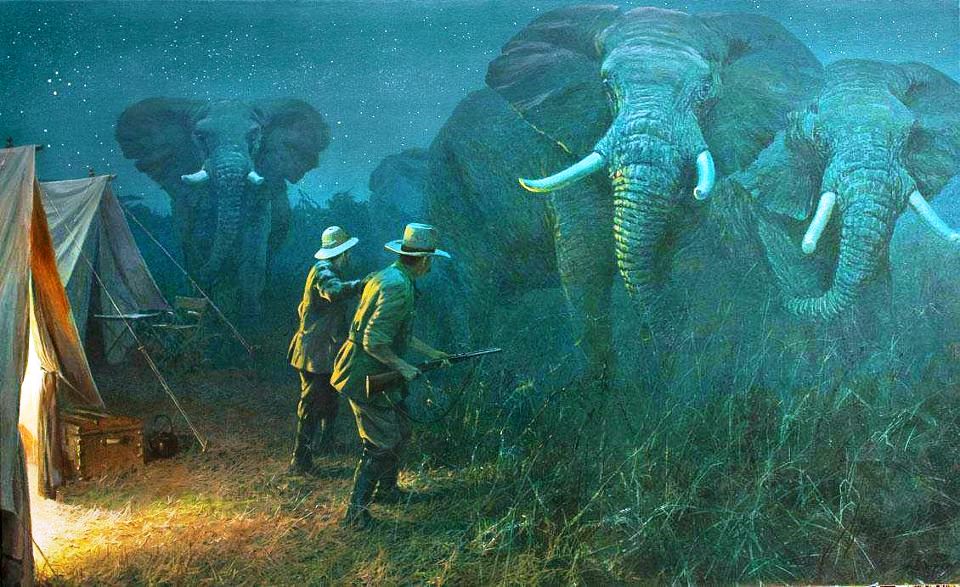 Last edited by a moderator: Jan 19, 2016
Willem Pretorius--Kingdom of Bahrain 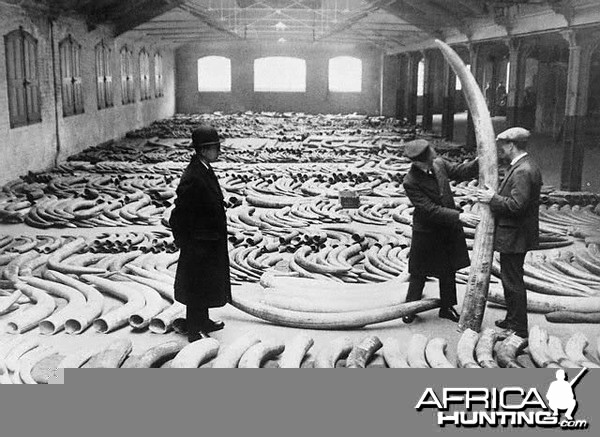 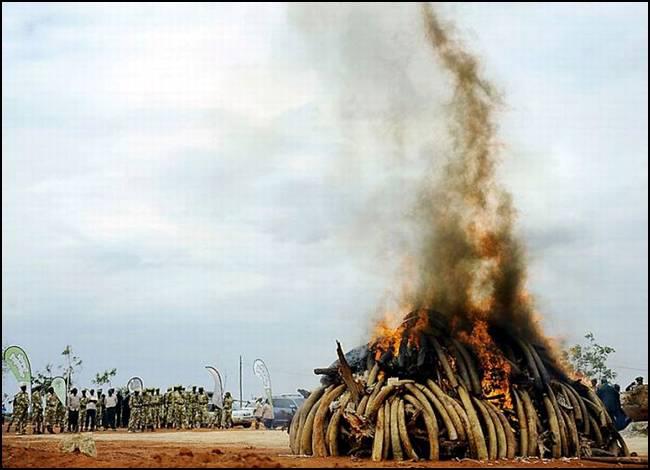 Last edited by a moderator: Dec 1, 2016
Willem Pretorius--Kingdom of Bahrain 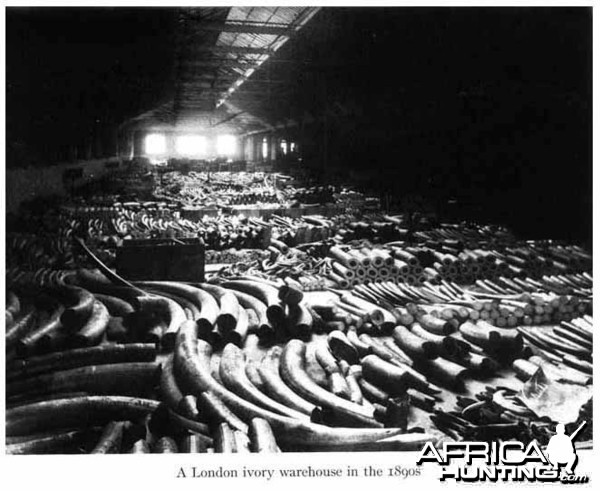 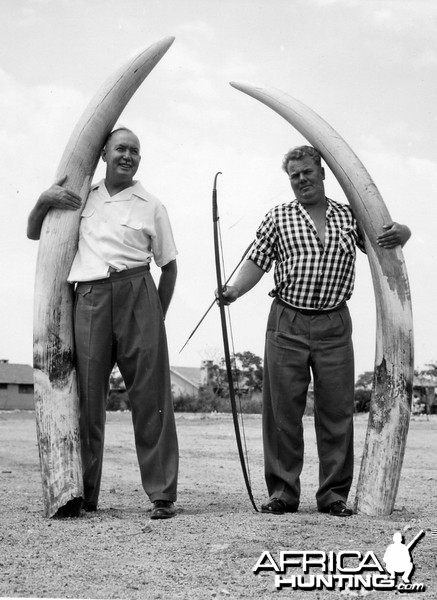 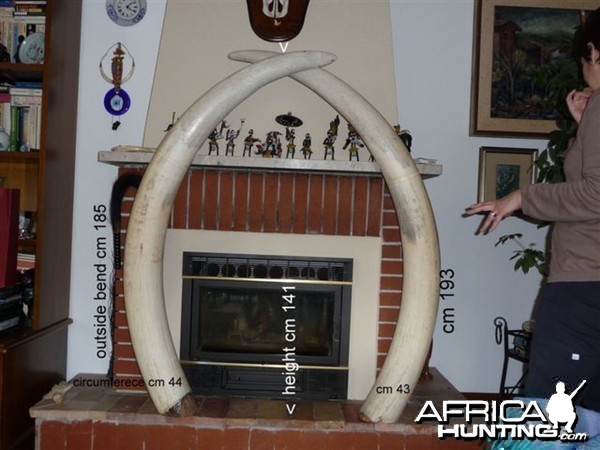 surely that bloke didn't take down that elephant with that little old stik flinga :biggrin2:
he would ve ended up as elephant toe jam
Last edited by a moderator: Dec 1, 2016
THE HUNTER; The person that pays over 90% of the cost for the presavation and maintance of wildlife and gets zero credit for it ................
You must log in or register to reply here.

The Great Tuskers of Kruger National Park, The Magnificent SEVEN