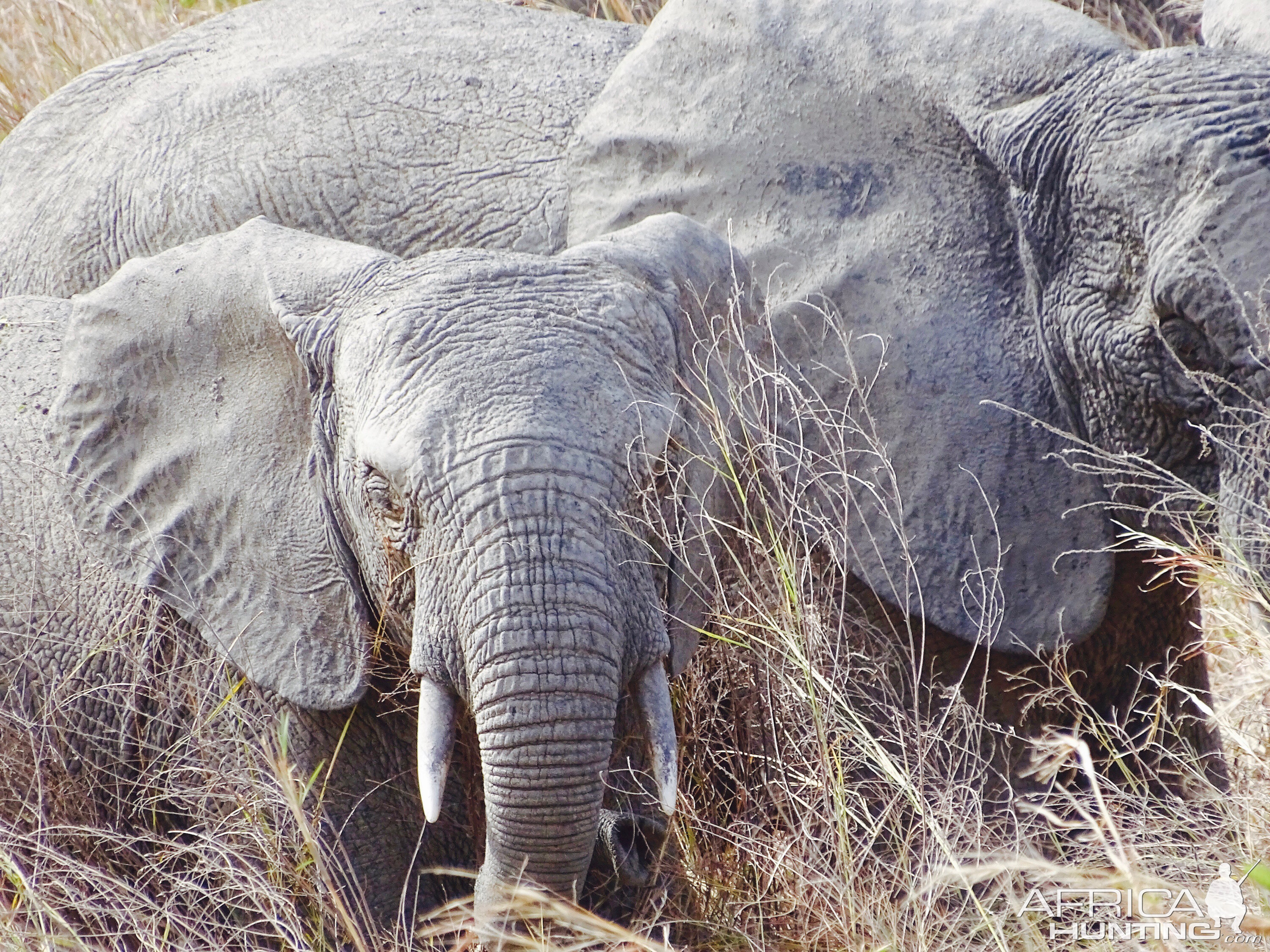 If not predated by man, elephant populations can grow at the rate of approximately 5.5%/annum, doubling every 13 years until the approach of maximum carrying capacity forced by food limitation.

Man is the keystone predator of elephants and has influenced the size of elephant populations for thousands of years such that they have probably rarely reached maximum carrying capacity in most areas of the continent. An international trade in ivory has been extant for 1000 years. It is only recently that attempts have been made to provide areas that have been set aside for the complete protection of elephants and other wildlife.

Where such attempts have been successful and not thwarted by poaching or illegal human settlement, the effects on habitats have been devastating and long term, entirely due to elephants. (Other herbivore species are generally kept in balance by predators before serious habitat damage can occur – with the possible exception of the hippopotamus.)

Elephants and man are the only species capable of major landscape engineering and habitat transformation. When human populations in Africa ceased to be hunter gatherers about 2000 years ago and acquired metal tools and settled lifestyles associated with agriculture and pastoralism, serious human elephant conflict began. Before that, man could only depend upon fire and primitive weapons with which to hunt and transform landscapes and human population numbers were very low.

In 1955, mean human population density of the African continent was 9/sq. km and rural (non-urban) density was 7.5 (www.worldometers.info/world-population/africa-population/ ). The equivalent densities now (2017) are 42 and 25. It has been suggested that elephants can’t readily co-exist with people once the densities of the latter reach 15. Clearly, there are still many areas of suitable elephant range where rural population densities are well below 15.

However, these tend to be in the more brittle environments, which are least suitable for agriculture. Elephant range area will continue to shrink as human population rises unless use of land by elephants offers more profit than alternative uses. The rural population density for the whole African continent is forecast to reach 39/sq. km from its current 25 by 2050.

The results of a recently conducted elephant census (GEC) in 18 African countries suggested a total median population of 352 000 (www.greatelephantcensus.com). This represented a 30% reduction in numbers in 7 years, principally attributable to poaching. It was notable that 84% of all elephants counted were in areas formally protected for wildlife, but that there was still evidence of unsustainable levels of killing in many of them.

Thus, current levels of protection in protected areas were generally inadequate. While the GEC suggested that elephant populations in the protected areas of many of the surveyed countries were sub-optimal, it was almost as disturbing to note that, in two (Zimbabwe and Botswana), they were supra-optimal and that these accounted for some 60% of the census total. Had numbers in these areas been culled to sustainable levels such that the habitat and other wild mammalian species were not suffering, the total census count would probably have been in the region of 272000.

The long-term sustainable density of elephants will always be lower than the short-term maximum carrying capacity and will obviously vary according to ecosystem type. However, a conservative mean figure is in the order of 0.75/sq. km.

If all 18 countries in the GEC had elephant densities in the surveyed areas of 0.75/sq. km, the count would have been 488 000. This suggests that there is considerable scope for upping elephant numbers without increasing the amount of land allocated to wildlife. However, it might be argued that the proportion of land gazetted for wildlife protection in some countries is already excessive relative to their land areas and may, in consequence, lead to resentment by their rural populations.

Tanzania is an example of a nation with a possibly disproportionate area of its land (well over a quarter) dedicated to wildlife despite a human population density of 57/sq. km, considerably higher than in some other African nations with greater elephant densities but smaller protected areas. The GEC figure for elephant in Tanzania was 43000 (0.16/sq. km of protected area). At a density of 0.75 the count would have been 201 000, emphasizing major lack of control over poaching.

It is clearly up to each of the individual governments of range states to determine how much land to set aside for wildlife as well as to the land managers therein. This will, in large part, be determined by the perceived gross value that the wildlife generates relative to alternative land uses as well as to the costs associated with protection. Currently, however, the scale of protected areas is often the consequence of past colonial gazetting and takes little account of growing human population pressures and lack of the financial resources needed to provide adequate protection.

Given the findings of the GEC and giving consideration to increasing human population pressures, it seems likely that elephants will be confined in the future to protected areas although it may, in some cases, be possible to create wildlife corridors to enable movement between sites. It should be noted that confinement, in the sense that the term is being used here, does not necessarily imply the construction of physical barriers.

The presence of adjacent humans at densities exceeding 15/sq. km will constrain, but not totally prevent, elephant emigration unless they are forced to move by lack of nutritional resources. The only circumstances in the future in which elephant range could be expanded beyond that provided by currently formally protected areas would be if adjacent landholders were to find that hosting elephants provided a greater source of income than they were able to obtain from subsistence farming.

It should be appreciated that areas protected for wildlife are not protected solely for the benefit of a single species – the elephant. Managers should strive to conserve habitat and species richness. In many cases, however, the principal management needed will be to prevent the illegal activities of poaching for ivory or bush meat.

It must be acknowledged, however, that successful protection will eventually lead (and, in some cases, has already led) to harmful surpluses of elephants – unless they are culled (or translocated) on an annual basis.

Failure to control a surplus population that is constrained within the confines of a protected area of fixed size is a dereliction of duty by management and will lead to habitat damage and loss of species richness. Arguably, this dereliction is currently being witnessed in some protected areas in Zimbabwe and Botswana.

Thanks for sharing and very interesting read.

Sadly very interesting. I have read this about Botswana elephants overpopulating so much that they have starved other herbivores out. Supposedly Botswana has nearly twice the carrying capacity of elephant population carrying density.
Africa on my mind.

Chobe National Park has at least double the elephant numbers that is sustainable. That is from what we were told when there in 2015. They can make incredible changes to the landscape when unchecked. Can you immagine the $$ to transplant 5000 elephants? Just gonna have to cull them at some point....
Bruce

a sad fact that nobody wants to face.

Part of the problem is that the general public views elephant population as a singular even problem. The truth is that there are 18 different wine glasses filled to varying degrees. Each needs to be waited on separately, but no one has that control.

Unfortunately, there are different lineages. Those in Southern Africa are typically short and thick, and Eastern African elephants are typically long and thin. Send the Chobe Elephants to South African or Namibian Hunting Concessions, good enough. Also, drive elephants to hunting concessions in The Reserves near Kruger, where on impala are more than elephants.

Only impala outnumber elephants
You must log in or register to reply here.

The Costs of Protection By Douglas Wise

A Sane Voice In A Ludicrous Conservation Debate

The Elephant In The Room

B
BillyMiller Qc_BearHunter BillyMiller wrote on Qc_BearHunter's profile.
Hi. I’m also new to AH. I’m a professional hunter in Zambia. If you would like me to quote or give you any advise would be more than happy to help. You can reach me on WhatsApp or Signal on +260 977 583697
43 minutes ago •••