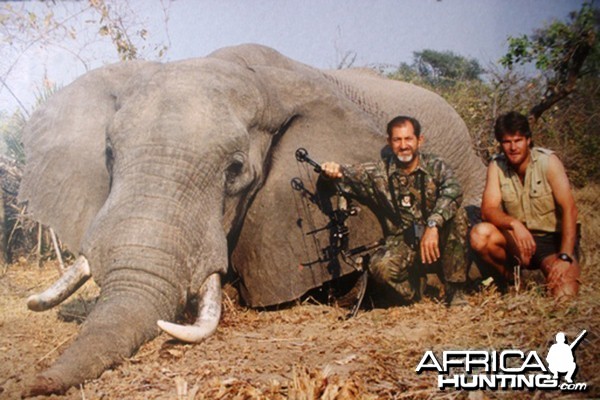 October is hot along the Ume River in Zimbabwe. The Zambezi escarpment feels like a sauna in the mid-day heat. The only moving thing is the small stream of water that flowed below us. We were high on a hill overlooking the panoramic view of Lala Palm, Jesse bush and some Ana trees - (Faiderbia Albida). My eyes were bloodshot from the constant strain looking through the Swarovski binos, searching for the great grey bodies of Elephant.

Crack! The loud break of a tree branch made us all jump. No one had seen them come into the gully below us. Nzo, confirmed Namabwe, one of the two Matabele trackers with us pointing at them. The old bull could not resist the ripe curly pods of the Ana trees. There were four of them. One was a truly old monarch with broken tusks and torn ears. He was massive in body and head although the years that he wandered around showed clearly even at this distance.

There was one nice bull and two younger Askaris with the old one. I looked at Kirk, my friend and PH from Zimbabwe and smiled. No words were needed. Yawan, my Spanish client and long time friend just knew that this was it, the hunt was on. The three of us has done this many times before and formed a close strong team. This time though, we would be hunting Elephant with a bow and arrow.

Yawan has hunted all of the Big 6 with a rifle many times over. It did not é›»o it for him anymore. I introduced him to bow hunting a few years before and he was totally hooked. He has found what he was looking for. Now he was totally addicted and could not get enough.

The wind was good, the visibility was +-20 yards and the going awful in the Jesse bush. After 90 minutes of crawling we came close enough to hear and smell them although we could see nothing of these huge mammals. It amazes me how something as big as a truck just disappears if they do not move.

Suddenly a splash of white caught my eye. Up came the binos and brought a tusk into view. Fifty pounds flashes through my mind. Kirk saw it as well and winked at me. I moved Yawan into a spot where we could see better and pointed at the bull with the nice tusks. They moved a bit through all the Lala palm and one has to be aware of every animal the whole time so as not to be surprised. Yawan was as calm as always. The 90lb Hoyt Viper came to full draw. The bull took a step forward and a low growing Lala palm obscured the heart. High lung, I urgently whispered to Yawan as I was worried that his aiming would prevent him from seeing the plant in the way. The range was 24 yards.

One hundred and ten foot pounds of energy were released as the silent arrow flew to a spot +- 15 inches from the top of the elephants lungs. The 210gr Steel Force Broad head cut a path one inch wide and 35 inches long through both lungs and stopped against the shoulder bone on the opposite side. The sound of the arrow finding the mark sounded like a wet towel slap.

The elephant went from standing still to full flight in a split second. He cleared the Lala Palm like a runaway Bulldozer. His companions followed in his wake, not sure what caused him to take flight.

We were drenched with sweat and stood like statues trying to make sense of the braking branches and noise. Then all went silent around us. We tried to see if any of the others had stayed behind. Suddenly a loud yell broke the stillness as Namabwe vented his lungs high on the hill where we left him to observe proceedings.

He is down! he kept yelling. I looked at my watch and could not believe that 90 seconds ago, the arrow was still on the rest. I smoked a cigarette and then we took the track. Blood was everywhere. It showed a perfect lung-shot. The bull was on a death run as he went straight over the bush and plants. We came in from behind him as quietly as we could.

He laid on his brisket with his front and back legs folded to the rear as if he was given a frontal brain shot with a heavy rifle. We moved to the side and Yawan gave him another arrow behind the shoulder to make sure that he was dead and not fooling us.

Finally Kirk and I lowered our rifles and cleared the chambers. Nobody said a word. It was time to reflect the hunt and pay the respect that this great animal deserved. There was no jumping up and down and yelling or slapping each other on the back. This was not the time.

This has become a dream come true for Yawan ever since he drew his first bow a few years ago. There were tears in my eyes when I took the photos. It all came together after many miles of walking, hard work and good preparation. This would be the first Jumbo of many that Yawan would hunt with his bow in the years to follow. It was a great hunt shared with good friends and done the right way.

The tusks were 53 and 51 a side and that made it even more special.