They did. Unfortunately it was the snort and crash of several big cows exploding out of cover a few meters to our right. Probably satelliting off the bulls all along, we had no idea they were near. More noise, pounding, and dust to our front with an occasional hint of blue hide indicated they had taken the bulls with them. Looking at me with a weary grin, Naude’ simply said “that’s eland hunting.” With thirty years on my young PH and my shins flayed by the thorns, I couldn’t help but wonder a little how many days I could sustain this pace. The assembled herd was now on a beeline for the far side of the Kalahari, so we began the long hike back to the rendezvous with the land cruiser. 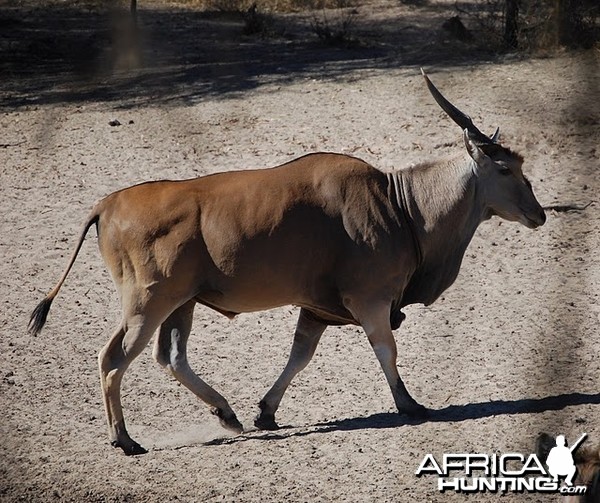 I went to Africa last summer with the primary goal of taking my first cape buffalo. Jack Atcheson had set up the hunt with Eden in north central Namibia. The buffalo hunt took place in the Caprivi and was an experience of a lifetime. Dries Alberts and I dodged elephant and hippo while wading through miles of riverine marsh country, eventually taking a magnificent, last-light 42 inch dugga boy. After dragging the huge old bull out of the marsh, we loaded up for the long but pleasant drive back down to Eden’s vast plains game concession.

At Eden, I planned to look for a kudu and an eland. I had been to Namibia before, taking a wonderful kudu among other plains game and a leopard. But I had never hunted eland, and had only seen a few at great distances as they vacated the country. Friends had urged me to make a traditional hunt of it, where tracks are cut at dawn, and long stern chases may or may not offer an eventual shot at a mature animal.
Naude’ Alberts, another of Eden’s young PHs, is something of an eland specialist with phenomenal tracking skills. As a result, we didn’t need a tracker, increasing our odds favorably because the two of us would have a better chance of successfully closing with one of the incredibly wary giants than would a larger team. 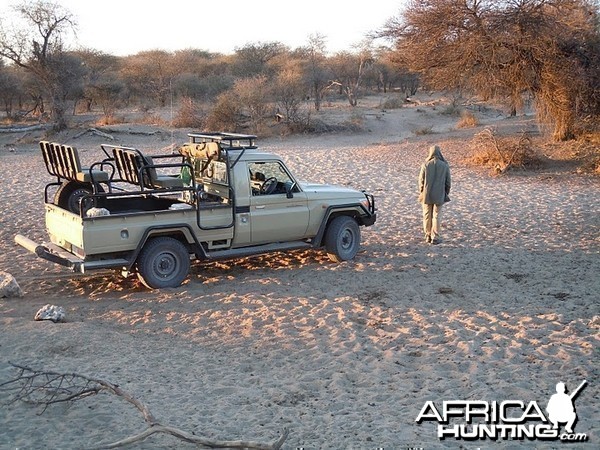 The second morning dawned cold and somewhat blustery. A cold front had moved in from the South (I will never get my head around that!). My shivers felt justified as I realized that two water bottles in the back bed of the land cruiser had frozen solid during the night. I opted for long pants and leather gaiters in part because of the chill, but principally because of the thought of another long day in the thorns busting brush.
We hit the tracks of three large bulls at the second waterhole. Naude’ took a few minutes to sort out their departure route, and then the chase was on. The cold wind, into which they were thankfully marching, convinced me that they would look for a bedding area sooner rather than later.

We had been on the spoor a little more than an hour, and had probably only gone about three miles when the bulls’ tracks began to crisscross and freshly clipped twigs indicated they were feeding. A large expanse of brush just ahead looked like an ideal place for them to retreat from the still chilly wind.

We entered it moving inches at a time. I hovered off Naude’s right shoulder to the extent I was able so I would have a clear lane if a target presented itself. We had gone no more than a 50 or 60 meters when we both froze in mid-step. Not fifty feet in front of use, a huge bluish form rose in utter silence from the ground. I could see little more than his shoulder and right hip. Naude’ whispered almost inaudibly that he was mature, but that he could see only one horn. I breathed back that I was fine with him, and Naude’ nodded to take him.

Without moving my feet, I leaned a little further to the right to fully clear the shoulder. The Trijicon dot was as bright as a laser in the brushy gloom against his dark hide. The 300gr TSX from my .375 took him on the point of the shoulder. And he collapsed after a half turn and a step. 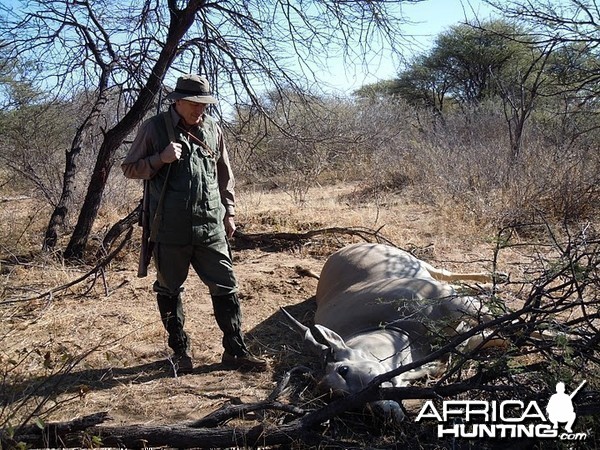 We walked up to him marveling. The horns were nearly perfectly matched and would later tape 38 inches. The body was simply enormous, and seemed every bit as big our bigger than buffalo I had taken a few days before. His hide and forehead brush had almost a groomed appearance to it. 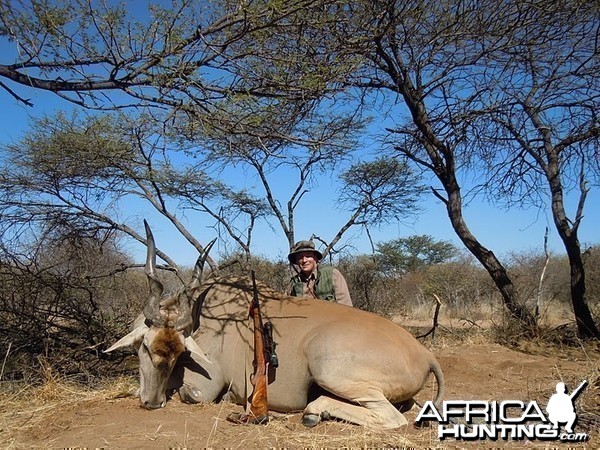 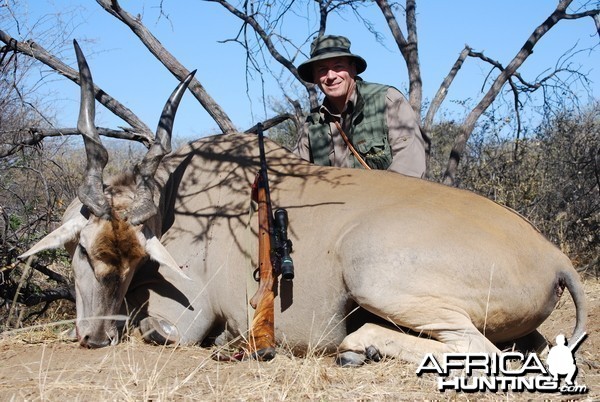 The buffalo will have pride of place over the fireplace in the gun room. It is after all a buffalo. But it is the eland which I’ll see on the way to bed every evening. And though I hope to hunt buff again; I will hunt another eland.
Last edited by a moderator: Dec 1, 2016
"We sleep soundly in our beds because rough men stand ready in the night to visit violence on those who would do us harm" American Novelist - W. Churchill

"The past is a foreign country, they do things differently there." L.P. Hartley
N 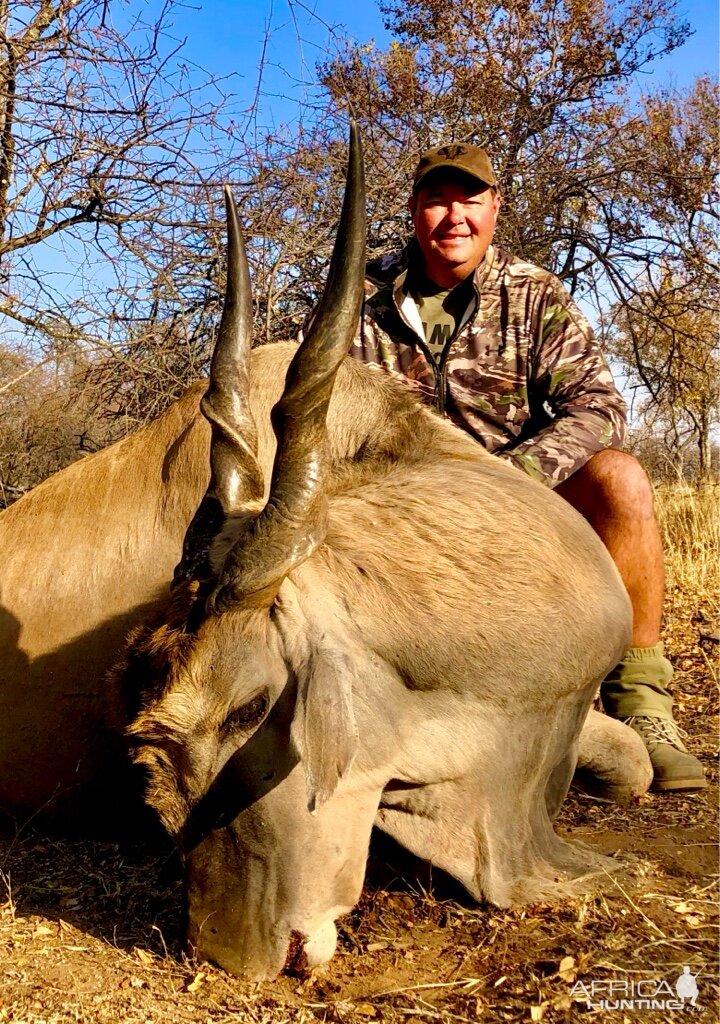 The lost classics by red leg?- beautiful bull for nhahnguyen11- an interesting post to start my day!
I

What a great hunt.Eland are part of every Safari I take. Tracking the best way. Great times!
M

From where this good old articles are coming from?
Great story, fantastic hunt!
You must log in or register to reply here.

E
The Tale Of An Eland Hunt In The CAR

Buffalo in the Caprivi

R
Guy's 7th Safari with Rudy Lubin in the C.A.R.