I'm sure many cursed the early date of the DSC Convention this year, but it allowed me to bring my entire family because my kids were still on Christmas break. This is the first year my family has been able to attend, and they had a blast!

While some exhibitors chose not to give us the time of day because we had three children in tow, others saw the next generation of hunters and conservationist and engaged our gang. By the time we left, all three insisted on DSC clothing and they're still reading the various advertisements they collected as I type this.

Kids are often very perceptive. My two boys were very imressed with Ivan Carter and his efforts to engage both and encourage the "conservation through hunting" theme. My youngest son, Hunter (in the picture with Ivan), is booked for his first elephant hunt in 2014. Although the hunt is not with Ivan or one of his "affiliates", he took the time to explain what his choice would be for an appropriate caliber based on Hunter's build and age. My oldest son and I attended Ivan's seminar on Friday, and he took the time to engage us personally while setting up his equipment. My oldest son will be lion hunting this year, and after Ivan's seminar, I have little choice but to have the hunt video taped!

Many others also engaged the family, but of particular note are Johan Calitz Safari and Hornady Ammunition. As I said before, kids are often very perceptive. My oldest son, who rarely says much, said Johan Calitz was the most sincere of all the exhibitors he interfaced with. Johan truely engaged us, and I truely regret not having been able to hunt the Okavanga Delta with him. Neil Davies with Hornady was also very engaging and spent time discussing my oldest son's upcoming safari.

Thanks to all the exhibitors who recognize that the future of the wildlife and this sport that we love so much depends on the next generation of hunter - conservationists. 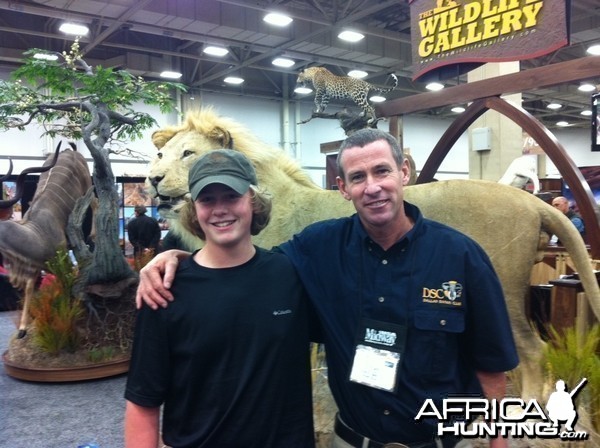 Interesting that some have a longer term view "built right in".
Kids can't hunt can they?

Look forward to the hunting reports.
Thanks for an interesting perspective.

It was good seeing you at the DSC convention. Good luck to you and your boys in the upcoming adventures.
Mike

I'm glad you had a good time. Sounded like a great convention at DSC.
You must log in or register to reply here.

ACROSS THE DARK CONTINENT with Ivan Carter

BEASTS OF LEGEND with Ivan Carter

Cervus elaphus Bob Nelson 35Whelen Cervus elaphus wrote on Bob Nelson 35Whelen's profile.
Hi Bob, how's things going in Wyong?. Down your way a couple of years back but haven't been in NSW since Ebor for the fishing. just getting over some nasty storms up here in Qld, seeing the sun for the first time in a few days. I'm going to NZ in the spring and hope to clean up a few buns while there and perhaps shake the spiders out of my old .303LE (currently owned by my BIL). Cheers Brian
Today at 8:56 PM •••
D
drbeech1968
A couple pictures of the sable i chased for miles in Mozambique, Coutada 9!! We finally caught up to him and I had the trophy of a lifetime. Mokore Safaris, Doug Duckworth PH