I grew up in South Africa and I though I had a pretty decent handle on venomous snakes - that was until I moved to Australia.

If you don't like deadly snakes then the Australian bush is not your place...

I played around with shot capsules for revolvers (.38 special & .357 magnum)......shot capsules were loaded with #9 bird shot and propelled by 5.5 grains of Unique. Here are some of the results: 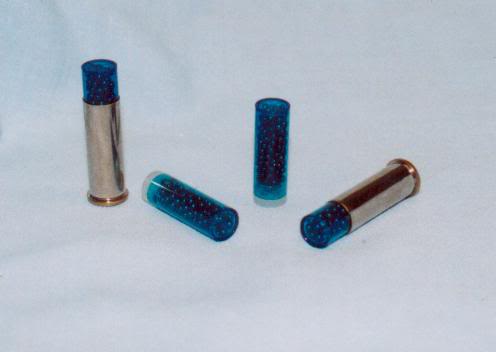 Pattern at 5 feet from a 2" Colt Detective special: 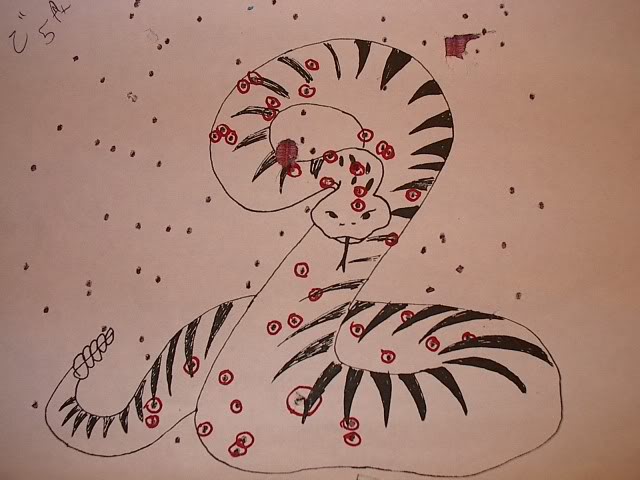 I was wondering if they would put a hole in an aluminum boat if I was fishing and a cottonmouth decided to drop in for a visit, so I took some scrap aluminum and bent it to the approximate thickness of my Johnboat. The shot didn't penetrate: 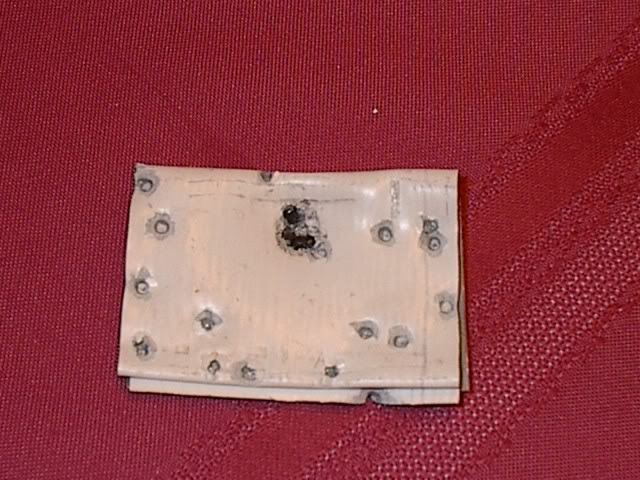 One thing I learned is that these shot capsules are pretty much useless at distances of 5-6'; the shot gets "caught" in the rifling (for lack of a better explanation) and the pattern is quickly blown. Also, the shot capsules at this range have a secondary shrapnel effect....I found shards of the stiff blue plastic capsule stuck in the styrofoam backing on the target holder. Finally, it really doesn't matter what chamber (.38 or .357) or barrel length (I tried 2", 6", and 4 5/8" barrels) .....the patterns all fizzle out after about 5 foot or so.

Last edited by a moderator: Mar 31, 2015
"If your dog thinks you're the greatest, don't go seeking a second opinion!"

"Likely"...Not very encouraging! Me too Charlie..best snake is a dead snake. If a snake come into my leopard blind this year I won't need a plane to get home!
Tommorow is promised to no one. Go live your dreams.

Slang kak/snake shit...
"I have taken more out of alcohol than alcohol has taken out of me.” Winston Churchill

All the snakes I ever met in over twenty years in Africa just wanted to be left alone. There was a time when we got spitting cobras every other week in my garden in Abuja, Nigeria. In the end I told my guys to leave them alone, because they never ever wanted a fight, they always tried to leave and raised their hood and spat only when cornered.

Puff adders, you can be two feet from them and they won't move, or just leave. The problem, as was said earlier in this thread, is that they are difficult to see and don't move away like other snakes. Dangerous by laziness...

The only one I seriously mistrust is the mamba, even though the few I saw also left: the only cases of death by snake bite that I was closely acquainted with were from mambas. In the three cases the victims did not live an hour.

This said, thanks for the links! I downloaded the app, one never knows too much.

My Namibia PH's son (12 yrs old) goes looking for puff adders and kills them around the complex. I've seen Cape Cobras crossing the road and went to look but they just ran away.
Once while hunting in SA my PH went into the blind and as I was entering he ran out screaming "snake snake". Brave guy! I looked in and it was a small 2 foot python. I just grabbed a stick and helped him on his way down the trail never to be seen again.
I do like hunting in the cooler time of year though.
L

Nice thing about living in Alaska, there are no snakes

Let's say I walk up on a mamba or Cobra and scare it to death (theoretically). Can I import that back to the US? Am I crazy for wanting a stuffed Cobra in my collection?

85Tecate said:
Let's say I walk up on a mamba or Cobra and scare it to death (theoretically). Can I import that back to the US? Am I crazy for wanting a stuffed Cobra in my collection?
Click to expand...

USFWS may have a say in that. The mamba doesn't show up on the CITES list but several cobra do. Most were Asian. So perhaps not for the former, but do some more looking in that direction on the latter.
G

I'm with JWB300; another Aussie. As a kid, has a red-bellied black strike at me fro the top of a fence post (missed, than God), nearly stood on a tiger snake, ran like hell, and have seen a taipan which lost an argument with the wheels of a train; lost his head. The neck and body ran 7'+, the head about 5" long; fangs near an inch. Taipans are one of the few snakes anywhere in the world which WILL attack unprovoked.
You must log in or register to reply here.