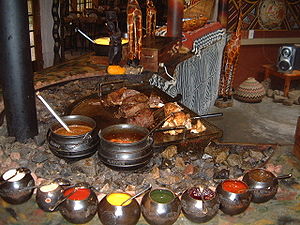 I really enjoyed all the wild game. Don't eat beans before going into the blind....
"When my friends tell me that I have led a remarkable life, I have to admit having done my best to make it so" - John Kingsley-Heath

I can't remember eating anything I wouldn't eat again.
Id. like to try some Guinia Fowl or Bush Pig next trip
Be Yourself Everyone Else Is Taken

Amen to bushpig bait. I'll pass
Worst was goat ribs in Namibia
Next worst was bony sheep stew in cape
Best was blesbok shanks at KMG
Best was oxtail at Hartzview
Never had bad gemsbuck or kudu
But with enough fresh bread and some fruit I'm fine. Cheers

I think waterbuck cooked on the brai was probably the best and most tender.
I never had a bad meal or ate something that I really did not like.
My son liked blesbuck schnitzel from the blesbuck that he shot.
I think it's great when we are able to eat some of the animals that are hunted on Safari.
Even the hot wings at Hooters on the way to the airport were good
Life is not a journey to the grave with the intention of arriving safely in a well preserved body, but rather to skid in broadside, thoroughly used up, totally worn out, and loudly proclaiming, “Wow what a ride!“

I have had a variety of meals. Most have been quite good. Single worst was in the East Cape a few yrs ago where blood sausage was served. Unfortunately it was bad. All who partook got food poisoning including the PH's. Cost one of my friends the better part of 2 days of hunting. There is usually enough choices of what to eat that you can find enough to fill up.
Bruce

gillettehunter said:
I have had a variety of meals. Most have been quite good. Single worst was in the East Cape a few yrs ago where blood sausage was served. Unfortunately it was bad. All who partook got food poisoning including the PH's. Cost one of my friends the better part of 2 days of hunting. There is usually enough choices of what to eat that you can find enough to fill up.
Bruce
Click to expand...

That would be bad.... Two days on the throne feeling like shit could ruin a trip for sure.
Life is not a journey to the grave with the intention of arriving safely in a well preserved body, but rather to skid in broadside, thoroughly used up, totally worn out, and loudly proclaiming, “Wow what a ride!“

Mekaniks said:
That would be bad.... Two days on the throne feeling like shit could ruin a trip for sure.
Click to expand...

never had a bad meal,kudu tender loins on the fire was the best,lioness was the biggest surprise,great white meat,cape buff kabobs on fire was 2nd best,elephant Kabobs over open fire on retrieval day was out standing. 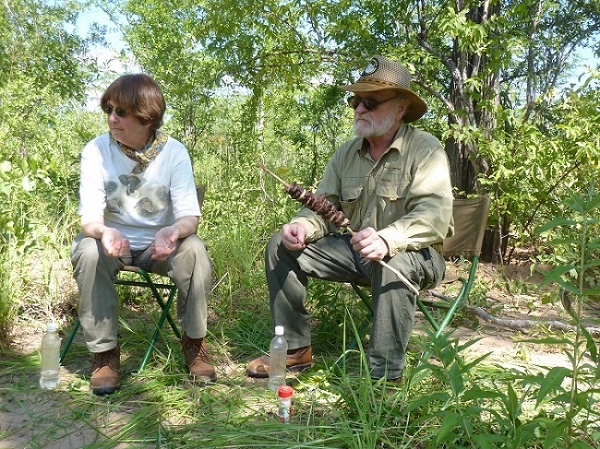 Coffee ceremony on a mountain top in the highlands of Ethiopia. And I don't even drink coffee.
D

Kowas Hunting Safaris said:
After your safari to Africa, what is the CUISINE offered that you:
a) describe as the BEST;
b) describe as the WORST;
c) recommend to others to TRY;
d), describe as NEVER AGAIN...
What remarks / comment / feedback could you share regarding the African Cuisine offered to you during your safari?
Click to expand...

Everything has been darn good for the most part, some excellent and very few misses.

But I think outfitters miss the mark in hunters wanting to eat game they shot, or at least the species.

I can buy beef, chicken, or pork right here at home. JMO

Most wild game I had was fantastic, it did depend on the cut of meat and the way it was cooked. Impala loin cooked on the open fire was fantastic, impala roast was below average. Surprisingly, the best meat was zebra loin, cooked on an open fire, a sweet tasting meat. Kudu stew was also excellent. Blesbuck steak was tough. I prefer to eat wild game in camp, it's part of the overall experience of Africa.
Keep on rockin' in the free world.
I have spent most of my money on women and hunting, the rest has been wasted.

Appetizer: kudu liver wrapped in lamb fat and seared over the braii, outstanding!

I found all the game meat to be awesome. I love the fresh home made bread also and the dessert I have had over there are over the top good.

I myself have yet to have a bad meal over in Africa but I have also not tried any of the super crazy stuff like blood anything. I also enjoy all the different juices they have.

I think a mistake some clients make is to not ask for something they may want or want to try. Most places will go out of there way if they can to let you try something you want. Ask and you will normally be surprised how willing they are to make your wishes happen even with the food.

I had a mate from Denmark a Danish national that came and hunted sambar deer with me. Knowing Europeans like their meat and game meat at that I had my mate make up a batch of his venison /pork sausages but with Italian add ons. I also bbq-ed Salcicce Italiano the famous pure pork sausages,we ate them every day as an after hunt bbq around noon.We ate them as he asked for them.The Dane still to this day always mentioned the deer snags in fact he confessed to dreaming of them as the best ever. The Italian snags were good but " oh those sambar sausages etc"

So one evening as we sat overlooking a likely deer spot and the wind blowing from the North to the South end of the big log we were using for cover with the Dane up wind. I farted,I farted alright,it was the fart from hell,maybe it was the fart of the century,it was that putrid that I swear a fly flew into the fart and fell out of the sky and died. He was warned to not move a muscle prior to getting there etc.
Ok we are in silent mode,no talk,all hand signals and I have a policy of no talking until well back out of the way.
After the two kilometres walk back to the car we rehashed the hunt and the Dane said to me "you know John,I have hunted all over the world,I have sat in hides with bushmen,I have hunted with pigmys,I have hunted with Inuit,I have hunted with all sorts of Africans,I have hunted everywhere but THAT fart was the WORST fart that I have ever smelt in my life"

Of course I wore that statement as a badge of honour ha ha. But The Dane still dreams of those sausages. 70% sambar,30% pork for the meat with fennel,garlic,red wine and secrets mixed in.
They were the most memorable of feeds he has ever had!
You must log in or register to reply here.

What is the TRUE cost of my African Hunting Safari!
6 7 8

What do hunters look for when researching / booking their safaris?
3 4 5

Thoughts and reflections from an African Safari