Three weeks before reporting to Zambia for a professional congress at Vic Falls in late 2004, it struck me that there just might some bowhunting in the neighbourhood.

So I contacted my old friend Neil Summers of North American Bowhunting Safari Consultants, among others. One name kept popping up: Strang Middleton of Bowhunters’ Zambia, based in Kalomo, about 160 km north-west of Livingstone. I’d heard from Rassie and John Gibson at Archery Africa, who had hunted there recently, that they were in the process of culling 600 impala. 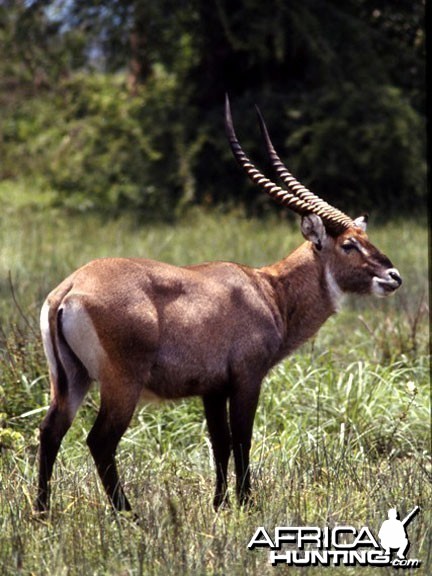 © Chris & Mathilde Stuart
Both the common - or ringed - waterbuck (pictured below) and the Crawshay's defassa waterbuck (above) are found in Zambia. And their distribution slightly overlaps in the Rift Valley. How to tell the difference? Look under the tail: the common has a ring of white, the Crawshay has a patch of white.

“I’m in,” I thought to myself. During our exchange of e-mails, they even agreed to fetch my son, Shane, and me for the one-and-a-half-day hunt – a round-trip journey of 320 kms.

We had an action-packed hunt, nearly froze at night, learned to do the Kalomo Shuffle, and got in some very enjoyable hunting. Here’s what happened.

When they went to follow up some Lichtenstein’s hartebeest, they dropped off Shane and me in an open grassland to walk and stalk our own hartebeest. Two hours later, after a long and exhausting stalk, we were almost in position for a shot when we were ‘bust’ by a pair of common reedbuck lying in the grass.

We still managed to get within 65 yards, and my bow was shooting like a dream. At one stage, I had a perfect broadside shot at a nice big bull, but a cow was standing behind him. My 750-grain-plus arrows could shoot right through the bull. I waited, and eventually the bull took off in the herd with no shot being presented. That’s bowhunting! Close, but no cigar. You never know exactly what’s going to happen until the shot is gone – and so many things can go wrong!

I’d told Strang that I’d seen those hartebeest up close, and felt they were just too ugly to shoot. “Can’t I shoot something else?” I asked. (The ranch also offers roan, sable, lechwe, puku, Sharp’s grysbok, etc.)

The next morning we were after a hartebeest bull again. But many a stalk and many a Kalomo Shuffle (see below) later, we still had no shot. After a 10.00 a.m. brunch, I sat in a ground blind all afternoon to cull some impala.

Early in the afternoon we spotted a sick Livingstone’s eland that they’d been trying to kill for the last three weeks. Its left eye and ear were eaten away by a mass of infection caused by ticks. Eland seem particularly susceptible to tick infestations. (Bacteria and viruses cause infection; parasites cause infestations.) Strang spotted the eland trotting across in front of us and shouted: “Shoot! Shoot!“ Shane called out the range from the laser range finder: 55 yards. Someone else yelled: “Aim two metres in front of it.” 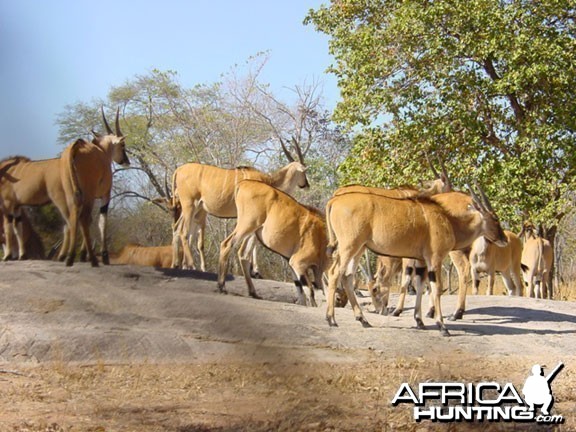 A herd of healthy Livingstone's eland - a stark contrast to the sick, tick-infested animal that de Villiers took with a bow to take it out of its misery and put on his list of bow-hunted trophies.

I listened to them all, and shot. The arrow flew as if in slow motion through the animal’s heart and out of the opposite shoulder. I could now add Livingstone’s eland to my list of bow trophies.

Ordinarily I would never take a shot at a running animal, but this was a very sick and suffering animal, and the PH was not carrying his gun.

Finally I convinced Strang to give me a chance for a Crawshay’s waterbuck. We stalked many of them, but time was running out. I worried about having turned down a Lichtenstein’s hartebeest. But luck would have it that we spotted a big waterbuck bull, and managed to get within 60 yards of him before he spotted us and became suspicious. It’s not easy to get close in the savannah grassland, but if you have been practising a lot, 60 yards on a big animal is not that difficult.

The bull knew we were there but remained relaxed. With the exact distance provided by the range finder, I was happy to take the shot. The shot was slightly quartering towards me. I thought the animal would turn away as I shot, making it more broadside. The shot, with a 150-grain Thunderhead broadhead arrow travelling at 265 feet per second, hit right behind the shoulder as the buck turned away, and came out in front of the opposite shoulder. This was the second Crawshay’s defassa waterbuck ever taken with a bow that is registered in the SCI Trophy Record Book. 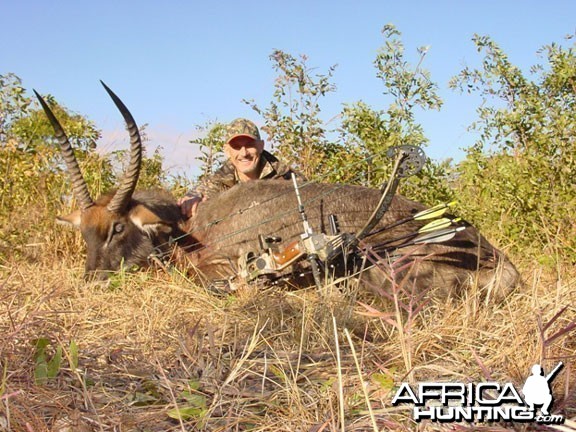 Adrian de Villiers took his Crawshay's defassa waterbuck at 60 yards with a 150-grain Thunderhead broadhead travelling at 265 feet per second. "If you've been practising a lot, 60 yards on a big animal is not that difficult."

There was just time for some photos, to pack, and to say good-bye before it was time to return to the reality of the hotel and congress.

By the way, the Kalomo Shuffle is based on Strang’s belief that when animals see predators crawling on all fours close to the ground, they sense trouble ahead. However, if the hunter sits upright with his gun or bow on his lap and shuffles along on his butt, the animal thinks the hunter is just a small item and poses no threat. I have to say that I’ve been doing the Kalomo Shuffle since Zambia, with great success. But don’t try it on our South African sekelbos!

Dr. Adrian de Villiers began bowhunting in 1983, and has taken hundreds of animals with a bow, including supplying the meat requirements of an entire farm staff for 20 years. He is also the first South African to take the Big Five with a bow. In 1986, he started Ethical Bowhunters, to instruct archery skills for hunters to become certified 'Competent Archers.' De Villiers is the author of Bowhunting in Southern Africa.
Last edited by a moderator: Dec 1, 2016
African Hunting Gazette
You must log in or register to reply here.