Connecting through Johannesburg to another African country

Connecting thru Joburg to another African country.......and why it might be a good idea to overnight in JNB.

I am currently on a 3 week trip to Angola and RSA, with the Angolan part of the trip being business related and the RSA part being a short hunt with Paw Prints Safari followed by week long hunt with @Game 4 Africa Safaris.

I flew from Houston to JFK in New York and overnighted there. Had to do this because of the 11 am departure of the SAA flight. B-class check in for SAA Flt 204, 15 hr. nonstop to JNB, was quick and easy (completely separate check in desk from Economy Class) and use of the Swiss Air lounge was nice. The flight and food service was decent, but the B-class flat bed seats are not very comfortable on this Airbus (might be long enough for a 5'9" person, but not a 6'2" person.)

The attraction of SAA Flt 204 is that it arrives into JNB around 8 am, making it viable to make a connection to another African country. Since my final destination was Angola, my company made the booking to connect on a 9:45 am flight to Luanda, Angola. When I checked my bag at JFK, I confirmed that it was checked all the way through to Luanda and I didn't need to collect it in JNB and make the transfer myself.

Just prior to landing at JNB, I asked a flight attendant if the plane was going to park at the terminal or out on the tarmac and transfer passengers by bus, which seems to be the norm. The flight attendant went and checked and reported we'd be parking at the terminal and I was relieved, thinking this would help with the relatively tight (1 hr. 45 min.) connection. Unfortunately, we parked out on the tarmac and had to be bused to the arrival terminal.

Since I was ticketed and connecting on another international flight, I did not have to go through immigration and customs. Thinking this was going to be a breeze, I followed the arrows "Connecting International Flights" or something like that. Road block number 1 was some sort of passport control check point, similar to check point right after security screening. The line was short and moved pretty quickly. Once pass this point, needed to go up one floor. Road block number 2, the escalator was out of service and blocked off so you could not simply walk up it. The line for the elevator was quite long, as there weren't any other options. Finally made it to the main floor of the international terminal and then had to hustle to get to the far end where Gates 21-30 are located and get on another bus to get to my plane.

Nice, short 3 hr flight to Luanda, arriving a bit after noon time. It has been about 6 years since I've been to Luanda and the airport terminal has been significantly upgraded and modernized. Cleared immigration super quick and then waited and waited for my bag to come on the carousel. It never arrived. I went to the Lost and Found desk and filed a claim. Another flight from Joburg was due in around 8pm and I was told my bag might be on that flight. No such luck. Saturday morning, I had to go to a normal company safety briefing and both our Security and Travel personnel got involved with helping me locate my bag. We went back out to the airport and checked with the Lost and Found desk again. It appeared that my claim was not filed properly the day before, as they couldn't find me online. So I filed another report and a tracking number was issued to me. Why SAA does this is beyond me. The checked bag claim ticket, with bar code and corresponding number doesn't suffice I guess, so another number gets issued. The SAA website has a page for lost bag tracking. It's now been two complete days and SAA still doesn't know where my bag is. Luckily, I always carry a couple of changes of clothes in my carry on.

Based on this, I doubt if I will connect through JNB again, especially a tight connection of less than 2 hrs. I will fly into JNB and will always plan to overnight and/or collect my bag directly. 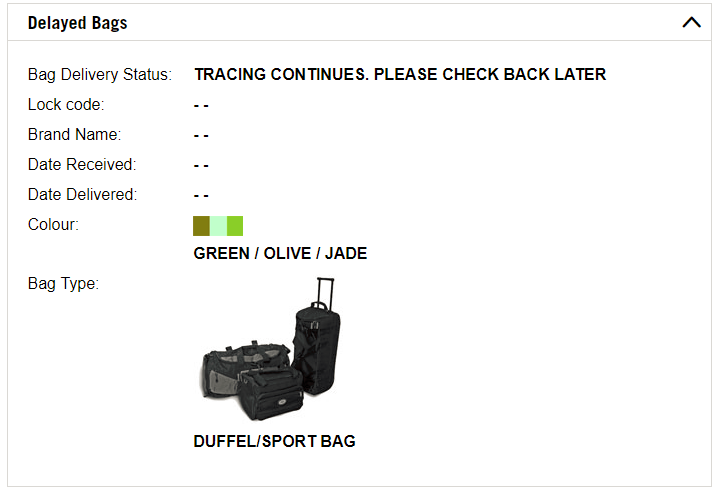 View of the Angolan Capital building from the hotel in Luanda: 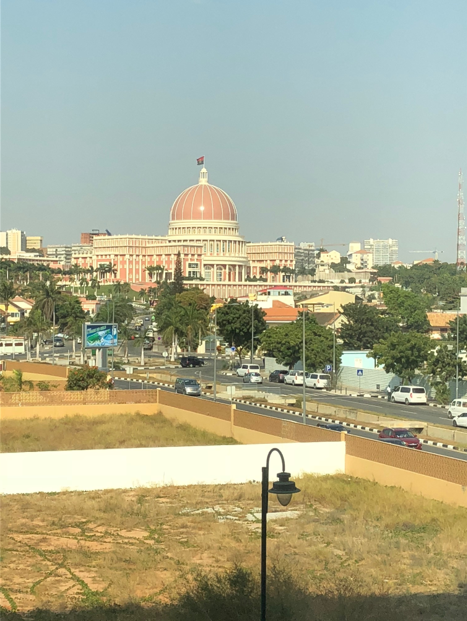 What a hassle! It sounds like you are taking this very well.
Africa on my mind.

The stress of baggage and such takes the pleasure out of travel. I just returned from a Namibian safari. A couple we met getting off the Atlanta to Jo'burg flight was also heading to Windhoek, Namibia the next day with us. We had all left the USA with our luggage checked thru to Windhoek. Our baggage all showed but the couple had a lost bag. It showed up two days later after finding out it racked up some frequent flier miles by going to Singapore.
PITA

Thanks for sharing this. What a pain. I do agree with you that parking out on the tarmac probably causes some delay in getting the baggage moving. We are spoiled in the US with not having to bus to the planes like in other countries. You are probably right that it’s better to overnight in JNB. The SAPS paperwork makes me want to try to avoid it though. I have a trip planned for next year to Namibia and will fly Delta to JNB then we have 2.5 hour layover then the late flight to WDH. It is always a risk but I’ve done it before so I guess I’m rolling the dice!
Philip

Sometimes it will happen on domestic flights. We were assured that our suitcases would be checked directly from Kimberley to Madrid. Being an old dog, I said let´s check the baggage carrousel in Joburg, and yes, one of the bags appeared.

We contacted the baggage coordinator, and she took care that the bag went back and was loaded on the Madrid flight.

Day 3 and still not a word from SAA on where my bag is. Very frustrating!

My first trip to Africa I transited through Joberg on my way to Namibia. Took 3 days for my rifle and one of my suitcases to show up. They just stayed in Joberg.... Sorry to hear your bag is still MIA. Good luck.
Bruce

Good luck, it’s such a hassle when you’re on your way to somewhere. I’m going across the Atlantic 6-8 times a year it does seem to happen more often on the Eastbound flights that the luggage is lost.

All the best, good luck and happy to hear you’ve got a couple of changes with you.

SAA and baggage. Very sorry to hear you about this.

A couple of years ago I flew SAA into Jo'burg from London, and after spending a day there, was going to head to Kimberley for a hunt. collected my firearms and one bag in JNB. Second bag - all my clothes - never showed up. I filed a claim and went away. Next day, no news - "still looking." I flew to Kimberley, and all my bags, including the missing bag, came off the carousel. A bit surprised, I went to SAA baggage and asked about the bag. The apologized and said it still hadn't been located, but once it was, they would find me.

It's hard to understand in this day and age of scanners, and the number of times a bag is scanned, that they can still not know where a bag is.

Having traveled extensively world-wide the last 27 years I have only lost my luggage or had it arrive late when traveling through London and changing airlines and terminals (easy solution, don't do that when outbound) and when traveling from US (something I do not do anymore, but for other reasons).
One important thing is always to avoid traveling on split tickets; yes-you can save a few dollars but when things go wrong you have a problem.

GuttormG said:
Having traveled extensively world-wide the last 27 years I have only lost my luggage or had it arrive late when traveling through London and changing airlines and terminals (easy solution, don't do that when outbound) and when traveling from US (something I do not do anymore, but for other reasons).
One important thing is always to avoid traveling on split tickets; yes-you can save a few dollars but when things go wrong you have a problem.
Click to expand...

You have been very fortunate.

Swiss Air lost my bags for about 3 days on a direct flight to Austria from Zurich.

I could give several more instances...

I learned the hard way several years ago to at least pack a days worth of clothing and all of my essentials in my carry on bag...

It's been a week in Luanda and SAA still hasn't delivered my lost bag yet. I did receive an email yesterday saying they found the bag and it will arrive shortly after noon time today (Friday) in Luanda. I leave for JNB on Saturday morning and was planning to do some quick shopping there. It will be interesting to see if all my gear is still in the bag.

This is the warm, caring, customer focused email I received from SAA:

The bag is coming tomorrow please go to airport and pick it up.

SAA did deliver my bag, finally, to the Luanda airport, exactly one week late and just in time for me to fly to Joburg on Saturday. I had to go to the airport and find it. Luckily, my employer has full time meet and greet staff at the airport and their contacts and assistance made the difference. Luckily, none of the contents were missing. The airport security ran the bag thru an X-ray and the guy looked at me and said, "You have a knife" and I replied, "Yes, it's a @Von Gruff !" And with that, he let me take my bag and go.

just for fun and grins today (Monday), I checked the SAA "lost bag" website and SAA reports they are still trying to locate my bag. They are clueless!

It's onward to Port Elizabeth on Tuesday, so hopefully all my bags will arrive and I can have a nice week of hunting in the EC.

I had a solid bullet, milled from solid brass with a hole thu it and is was on a key chain, that seemed dangerous to a X-ray tect and it now resides in joburg south Africa. I hope its happy at its new home.

375 Ruger Fan said:
The airport security ran the bag thru an X-ray and the guy looked at me and said, "You have a knife" and I replied, "Yes, it's a @Von Gruff !" And with that, he let me take my bag and go.
It's onward to Port Elizabeth on Tuesday, so hopefully all my bags will arrive and I can have a nice week of hunting in the EC.
Click to expand...

U
Checking in guns, bows at Johannesburg

A
Checking rifle on contiguous ticket and Johannesburg connection
2