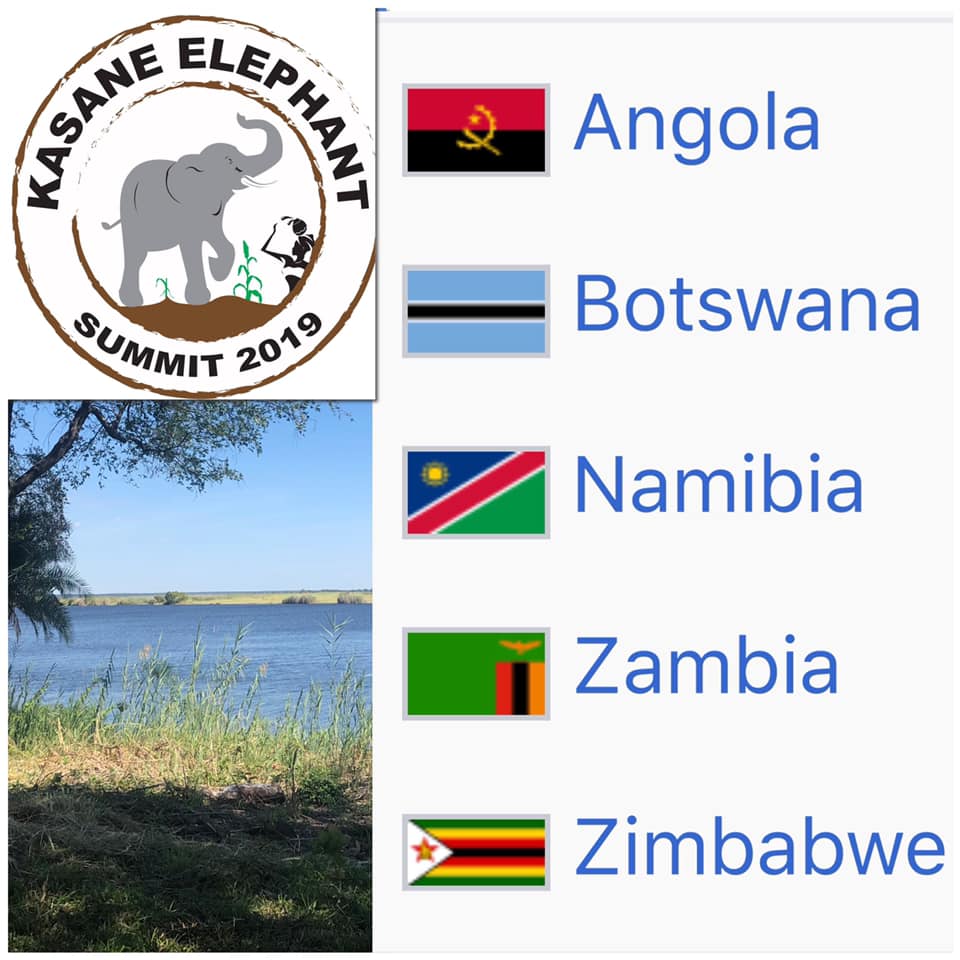 (07th May 2019) We the Heads of State for the countries comprising the Kavango –Zambezi Transfrontier Conservation Area (KAZA – TFCA) convened at the Kasane Elephant Summit on the 07th May 2019. The Summit whose theme was “towards a common vision for management of our elephants” focused on the management of the shared KAZA elephant population.

The specific objectives of the Summit were to raise awareness on the current status of the African elephant in the southern African region; exchange of ideas on human-elephant conflict, illegal and legal trade; and reach agreement on concrete interventions to address the challenges posed.

We reflected on the status of the African elephants in the KAZA TFCA, and noted that while overall numbers have declined, it is evident from available data that countries such as Botswana and Zimbabwe have large populations. Namibian and Zambian populations are increasing while Angola has a small population.

We further noted that even as numbers continue to grow, human-elephant conflict is escalating in much of the elephant range due to competition for limited resources and the effects of climate change. The conflict is aggravated by inadequate local level participatory land use planning and conflicting land use policies. It was also recognised that communities are often not adequately empowered to deal with this conflict.

We note with concern the recent upsurge in illegal offtake of elephants on much of the African continent. If this state of affairs is allowed to continue unabated, it will pose a very real threat to the survival of this iconic species in much of its range.

We acknowledge that the African elephant has been the subject of much discussion in international fora such as the Convention on International Trade in Endangered Species of fauna and flora (CITES).

The conditions for trade in elephants and their parts and derivatives have been the subject of often acrimonious debate with onerous conditions being placed upon those countries whose elephant populations are currently on Appendix II.

Efforts by southern African elephant range states to sustainably manage their populations are subjected to constant media scrutiny which often does not take into consideration the aspirations of the KAZA range states.

We contend, however, that communities deserve to derive benefits from the sustainable utilisation of natural resources including elephants; particularly since they are the ones who bear the brunt of living side by side with these elephants.

In reaching agreement on the specific actions to be taken to manage the KAZA elephants, we recognized the principle of sovereign equality and territorial integrity of the respective partner states, acknowledged the variable state of readiness of KAZA partner states to adopt all resolutions and noted the uneven distribution and abundance of elephants across the KAZA landscape.

i. Conduct transboundary coordinated and synchronized KAZA wide aerial surveys of elephant (and other wildlife populations) according to standardized methodologies to allow comparability across the KAZA landscape;

ii. Harmonise management of elephants as much as possible while taking into account national peculiarities and priorities;

iii. Provide for integrated land use planning and harmonisation of land use policies at KAZA level.

iiii. Provide incentives for communities to continue tolerating and coexisting with elephants;

v. Ensure that the management of elephants is adaptive;

ix. Effectively engage the international community on matters related to elephant conservation and management, including lobbying for support for the proposals submitted by KAZA member states to CITES CoP 18;

I knew it all along: It's climate change. Now the greenies have to listen.

On a serious note. Glad they got together and presented some thoughtful resolutions. As always, I hope there is a resolve to do something about it.

Seems like they are trying to develop some sort of strategy among themselves to combat a serious problem. Now we wait and see what materializes.

NamStay said:
We contend, however, that communities deserve to derive benefits from the sustainable utilisation of natural resources including elephants
Click to expand...

Unfortunately nothing was said about this in the "to do's", but this is the crux of the issue with the antis. If, as the antis believe, elephants are on the same moral plane as humans, then it is never legitimate to "utilize" them in any manner, sustainable or otherwise. If, as hunters almost by definition must believe, elephants, as animals, are on a different (which is to say, lower) moral plane than humans, then it is not only legitimate but it may in fact be necessary, to utilize these animals provided it is done in a sustainable manner.

This seems like a start to considering how to address a problem which the rest of the world denies the existence of - an over-population of elephants.

Elephants in southern Africa have been the subject of much debate recently, particularly after Botswana announced that it was reviewing its elephant management strategies. The process of determining how best to manage elephants in southern Africa went one step further over the past weekend when the heads of state of the countries with the largest remaining elephant populations met in Kasane, Botswana to formulate a collaborative management strategy.

This a brief summary of the strategy adopted by Angola, Botswana, Namibia, Zambia and Zimbabwe, which jointly make up ‘The Kavango Zambezi Transfrontier Conservation Area (KAZA) – which is home to more than half of the remaining African savannah elephants. For a more detailed understanding of this strategy, please download the strategy document here.

Please note that this document does not directly address the issues currently creating tension, such as Botswana’s trophy hunting and culling discussions, or the reported attempts by KAZA countries and South Africa to convince CITES to permit trade in ivory. Rather, this document provides the umbrella strategy within which those matters will be researched and potentially implemented.

1. The wellbeing of these elephant populations hinges on maintaining their habitats and upon ensuring the movement of elephants from more densely-populated areas in Botswana, Zimbabwe and Namibia, to areas in Angola and Zambia – by securing wildlife migration movement corridors.

2. The latest elephant surveys indicate a population of at least 220,000 elephants across the five KAZA countries, with 85% concentrated in Botswana and Zimbabwe. Populations in southeast Angola and southwest Zambia have suffered major declines due to poaching. The area of Kavango and Zambezi (formerly Caprivi) in Namibia have suffered from increased poaching, although elephant populations are reportedly growing.

3. Growing elephant populations may pose a threat to diminishing riverine and woodland habitats, and the species dependent upon such habitat.

5. The KAZA portions of Angola and Zambia have large tracts of suitable elephant habitat, but with smaller populations of elephants and other wildlife (and concomitant lower human densities), which should provide a “pull” effect from areas with higher elephant populations, via the wildlife migration corridors.

7. Long-term monitoring of the KAZA elephant population is required, as well as identification and mitigating of threats to elephant populations. One such threat is climate change, to which elephants are already vulnerable in areas of limited water supply. This dynamic exacerbates human-elephant conflict.

1. Facilitate integrated land use to ensure long-term ecosystem integrity and connectivity for KAZA’s elephant population. Short- and medium-term activities in this regard include ongoing and increased data collection and analysis, ensuring an adaptive management process, protection of Angolan water sources of the four major rivers flowing through KAZA, awareness raising amongst various sectors that impact on elephants, providing formal legal recognition for wildlife migration corridors, and re-alignment or removal of existing veterinary fences.

2. Maintain and manage KAZA’s elephants as one contiguous population. Short- and medium-term activities in this regard include aerial surveys, analysis of elephant movement data, understand data on human distribution and land-use, better use of existing elephant poaching data (MIKE), and integrating elephant management strategies for each KAZA country into this strategic planning framework.

3. Promote co-existence of humans and elephants for ecological, social and economic benefits.Short- and medium-term activities in this regard include supporting alternative livelihoods for local communities that help mitigate conflict, engaging with communities about conflict mitigation and building capacity for data collection, and to develop policies and practices to permit communities to sustainably manage, utilise and benefit from elephants and other wildlife.

4. Reduce the illegal killing of elephants and the illegal trade in elephant parts. Short- and medium-term activities in this regard include mobilising financial, human and material resources to combat the illegal killing and trade, coordination of transboundary ground-based patrols and air surveillance as well as cross boundary pursuit of wildlife criminals, review existing legislation to permit extradition of wildlife criminals, engaging communities to help fight wildlife crime, better use of DNA analysis to better inform evidence-led prosecutions, and aligning of customs and immigration procedures with regard to the movement of illicit wildlife products and better training of personnel in this regard.

5. Establish the high-level decision-making process to achieve the above. Short- and medium-term activities in this regard include a 5-year review process, ensuring that KAZA partner countries allocate sufficient financial and other resources in these regards, and establishing reporting and feedback mechanisms.

Good to see these countries coming up with a plan on how to manage their elephants. The elephant foot stools handed over by President Mokgweetsi Masisi to his counterparts from the other countries did not seem to go down as well with the animal rights activists.