That is a bunch of clueless people making comments with there heart not there brain.

Pictures with an Indian Elephant!

Read the comments and someone mentioned the conservation efforts of Kenya and what a great job they are doing, lol. There is also a lot of confusion regarding poaching, ivory, and hunting where it is all mixed up. But I didn't think it was as vile or hateful as usually, someone is really doing a pretty good job trying to refute with facts.

As far as celebrities, they are all pretty much hypocrites and even though they have a platform they don't have any credentials or real experience in conservation, so you almost have to laugh at their opinion.

La la land! No reality! Get a real job people! Let trained wildlife biologists do their real world jobs and you stick to your fantasy world.
Africa on my mind.

Those comments would be funny if they weren't so sad.

Chelsea Clinton's comments were the best. Even her mother would be hard pressed to make a more factually incorrect statement than she did!

Are these the same celebrities that are buried under an avalanche of sexual harassment allegations? Liberal hypocrisy has no limits.

billc said:
That is a bunch of clueless people making comments with there heart not there brain.
Click to expand...

hard to use their brain when their heads are up their ass.

edward said:
hard to use their brain when their heads are up their ass.
Click to expand...

You just reminded me of a wonderful song!

Royal27 said:
Chelsea Clinton's comments were the best. Even her mother would be hard pressed to make a more factually incorrect statement than she did!
:
Click to expand...

We are so fortunate Hillary didn't win the election!

You are especially fortunate. You get to bring your personal property back to America from Zimbabwe.
And here I am, returning to Africa of many faces;.... the sloe-eyed temptress with flowers in her hair who stole my youth and my heart, and left me an old man with a kaleidoscope of conflicting memories of many dashed hopes and some fulfilled dreams. E. Echols 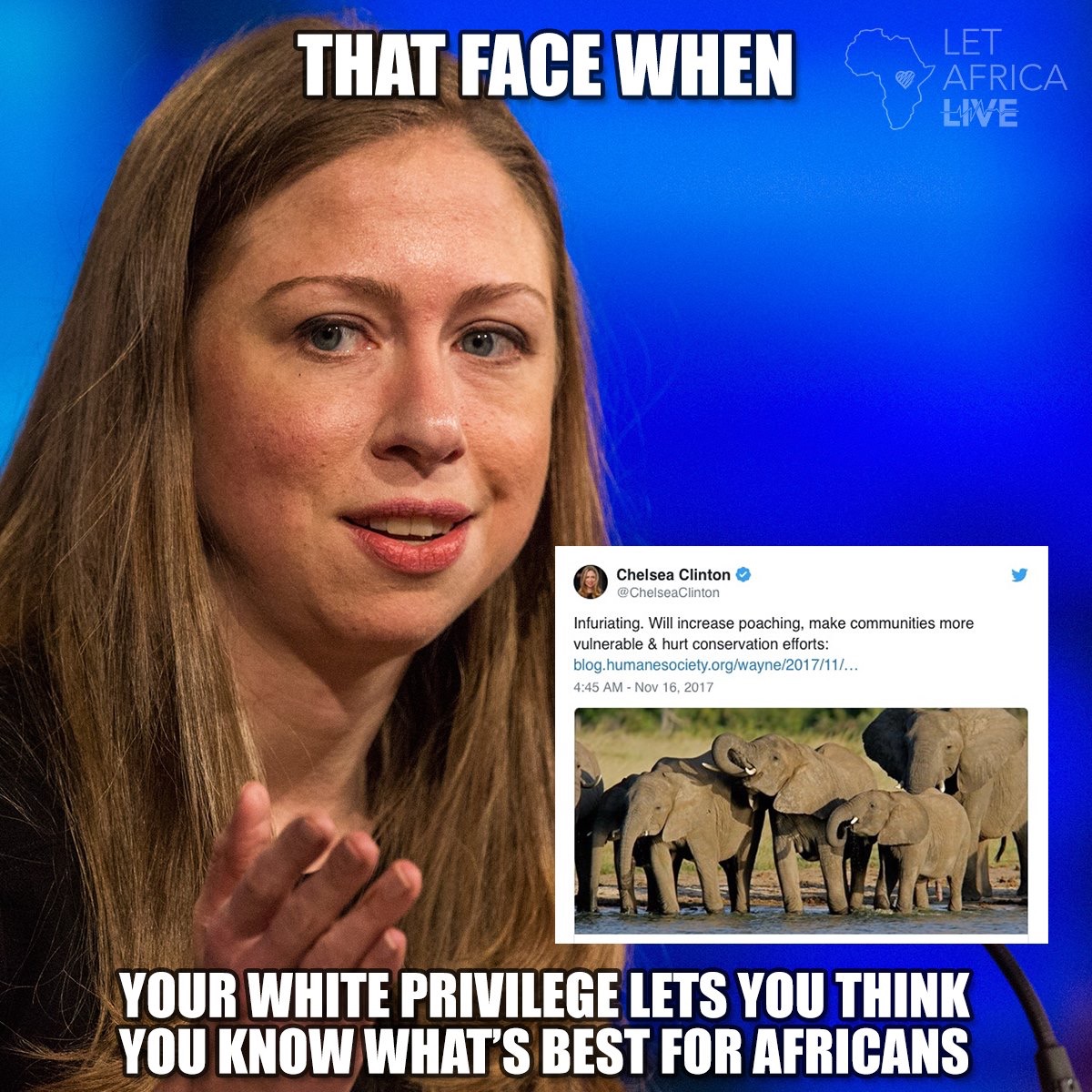 She’s just like the rest of the Clintons POS!

It's your right to hate hunting and choose not to hunt. You can abhor those who do hunt. But the reality is that the second you put a price on an animals head, the conservation begins. This guy - who is against hunting on a personal level - still gets it.
"Your imagination is your preview of life’s coming attractions." ~ Albert Einstein
B

Until a person has been to Africa, when a drought has occurred, they cannot understand the amount of damage to the habitat that elephant do. I was at a 65 square mile reserve in the Eastern Cape which had 21 elephant and the habitat had been decimated. The animals were being fed hay to keep them alive. The PH said that the property could support about 6 elephant, and they needed to be culled. However, as we know doing that is a difficult task. I want to know how many of the people who are objecting to the ban being lifted have actually been to Africa and seen what is going on?

When I visited Kruger, the elephant were in the process of doing the same thing. Until I went to Africa, visit/hunt areas that elephant populations, I didn't realize the damage they do.

The balance of nature needs to be preserved. If hunting isn't allowed, the communities don't get the meat from the animals, any money from the hunts, and poachers will kill the animals for the ivory. Hunting is part of conservation. Let's be honest, if the hunter can't bring back a mount, then the number of hunters will decrease to almost nothing.

I don't want to see an unlimited number of elephant or lion permits issued, but responsible hunting will help preserve the habitat and help to curb poaching.

flat8 said:
It's your right to hate hunting and choose not to hunt. You can abhor those who do hunt. But the reality is that the second you put a price on an animals head, the conservation begins. This guy - who is against hunting on a personal level - still gets it.
Click to expand...

I’ve seen this video I was quite surprised how informative and honest he was for being a non hunter.
Tommorow is promised to no one. Go live your dreams.

These ass hole celebs no absolutely nothing about everything except how to be perfect hippocrites. When it comes to wildlife conservation they know less than zero. I ask you then, name me one Hollywood personality who has donated a dime to anti poaching efforts. I seriously doubt it. They again play to their base of fans who as we know are for the most part not hunters. Again I say for the 100 th time , until we get a high powered PR firm or at least a division in say the NRA dedicated to publicity to immediately respond to issues on the web and in the media the general public will remain clueless.
Tommorow is promised to no one. Go live your dreams.
You must log in or register to reply here.

Trump to lift ban on importing elephant trophies from Africa