CAMEROON: My Hunt In Cameroon For Lord Derby Eland

I have been back about a week, just collecting my thought s and decided to try and write a report. Two years ago I started a thread about a show special LDE safari in Cameroon. I went on that hunt last year. It turned out to be a very tough hunt. Not only, was the temperature very hot, 90-100', but each day was started looking for fresh signs and expecting a 10 mile hike. It was very exciting watching the trackers work as we finally came upon fresh signs. A LDE came trotting threw a small opening. We didn't have time to put up sticks. I quickly shot sitting down. I knocked him down but he proceeded to get up before I could reload. He got back with the small herd and we lost him. I got this one opportunity after days of heat and hiking and I BLEW it! Naturally I blamed the miss on using the outfitters gun! I only got a glimse of one Roan and very few other animals were sited on this trip. This made me more determined than ever to return and hunt the LDE again. I personally believe that the LDE is the most beautiful animal in Africa, especially with the dark neck they have in January and February.

My Taxidermist put me in touch with a fellow who had hunted with Club Faune several times. He gave them a great referral. I wanted to hunt in a concession that had lots of game and they are near 100% on LDE and Roan. The Roan was also very high on my bucket list. Taking your fire arm to Cameroon is a challenge and the temp firearm permit cost $567 from Embassy in D.C. Outfitters usually charge $500-$600 for rifle rental plus ammo, but I wanted to use my own gun this time. Club Faune had a very nice man greet me at Douala and he guided me through the firearm process in about 1 1/2 hours. I spent one night in Douala and next day flew to Garoua, then we loaded up in a suv and drove 6 hours to camp. The camp was very nice and clean with plenty of staff. It had a generator with air conditioner from 6 pm to 10 pm. It cooled at night, so sleeping was comfortable.

First morning out, we checked my gun , all was ok and off we went. Mid morning we spotted a nice Roan, Grabbed the sticks and took off. He eluded us and I was glad. I definitely did not want to connect before lunch on the first day. Later that evening, we went to check a salt lick. We saw fresh signs headed toward the lick, so we went on foot the last 1/2 mile. The Eland only eats leaves and when they can't reach them, they just break the tree with a twist of their horns. It looked like there could be several Eland in this group. When we got to the lick, there were still two or three Eland using the lick. My PH said that the last one was a shooter. I had told my PH I wanted a mature LDE and he must have a dark neck. When I had first saw him in my scope, I got excited. He was beautiful with the big dewlap flapping as he walked and his neck was jet black. My first shop was fatal, but I shot two more times because I believe if he is moving, I am shooting. I did not want to loose another one. My heart, nor my bank account could stand it. I had a lot of mixed feelings because my Eland Hunt was over. On a twelve day hunt, it would have been nice to wait until later in the hunt, but after last year's experience, I was very pleased and you know what they say about a bird in the hand. 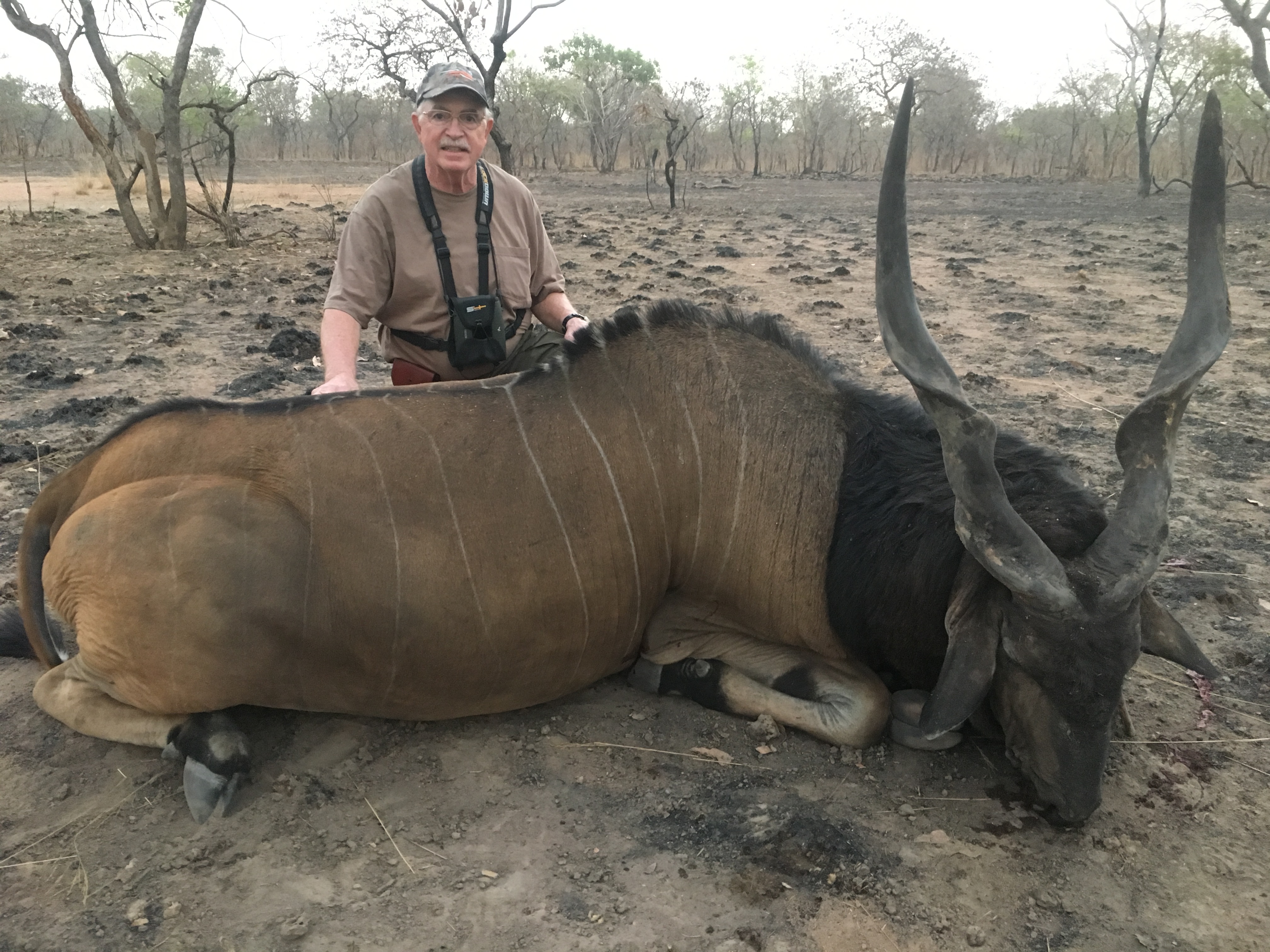 Day 2 was uneventful, it's rough riding the land cruiser, hoping you don't see anything. Then on the morning of Day 3, we saw a beautiful Roam. We sat up the sticks and bam, hunt was over. The Roan was also super nice, so I don't regret shooting him at all. 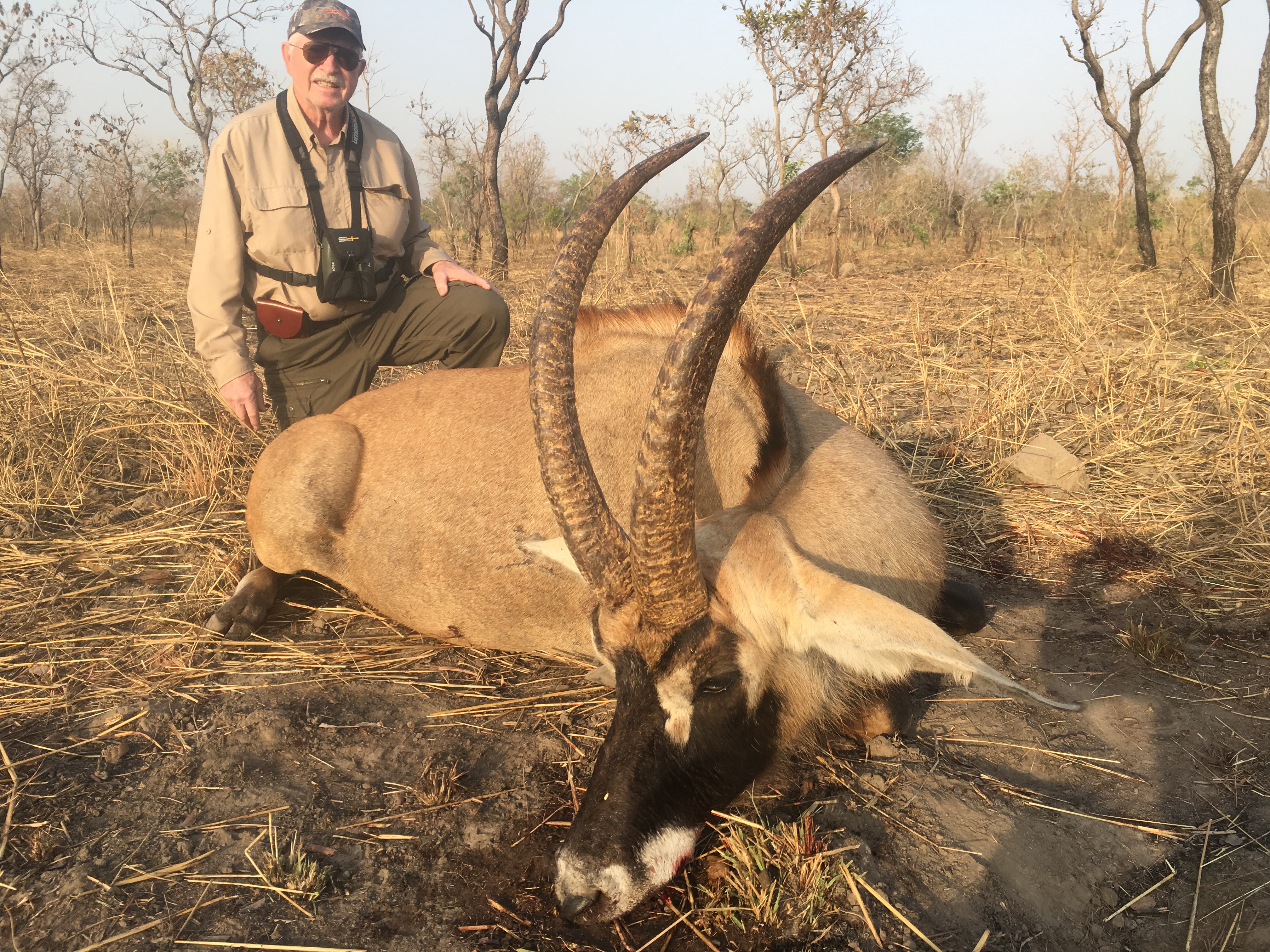 What to do now? On a Cameroon License you can only shoot two animals in group A. I wasn't interested in any of the B group or lower animals. I am not a collector and only have so much room to display. Besides this hunt with all included, I had pretty much reached my budget. On Day 4, I just rode along as we checked on men doing poaching patrol. Day 5, I decided to buy another license and hunt buffalo. My PH called the Paris
office to see if one was left on quota. He came back and said yes, I could hunt buffalo. The license and trophy fee would be $10,000.00 U.S.........I am thinking, no way. that's the trophy fee for three cape buffalo in Tanzania, so I decided to come home early.

I really liked the toughness of last years hunt, but the game on that concession was almost nonexistent. On this years hunt, I saw animals all the time. On the last day, I saw a Eland that my PH said would easily go 50". That was considerably bigger than mine, but its neck was not as dark. Lots of kob, Waterbuck, Bushbuck, Warthogs, Hartebeast, etc. I did get a nice Kob on the last day. 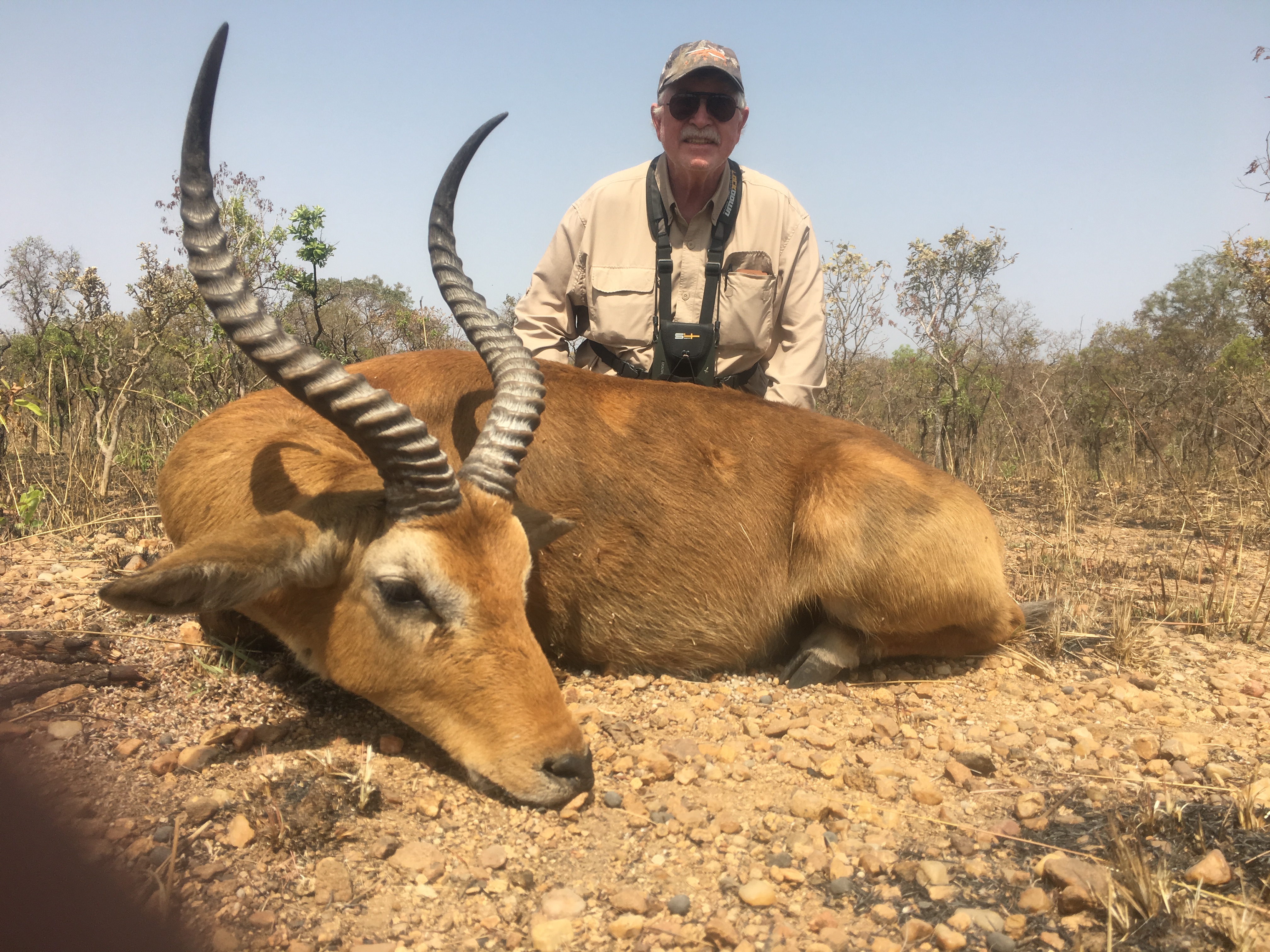 I would definitely recommend Club Faune, but if you want to track Eland, this is not the placed. They say that it has too many animals in the same area to tack and it is easier to hunt by spot and stalk.

If you go I would recommend taking your own firearm. There is nothing like confidence with your own gun. I have a Brown Precision in .416 rem that I am very comfortable with. It has a 1 x 6 Swarovski z6i on it. January and February are the preferred months for dark neck hair. I plan on doing matching pedestal mounts for my LDE and Roan. I'll post a picture when they are done.

Congrats, it's a beautiful LDE and Roan you took!

Congratulations.
Nice trophies. Thanks for sharing your hunt with us.

Congrats on the safari and nice trophies! Thanks for sharing!
John 3:16
K

Congratulations on an awesome adventure. All beautiful trophies . LDE would be awesome BUT their is this money thing for me. Forrest

Thanks for the report, congratulations on three great trophies.

Congratulations on your hunt. Roan's horns are well worn down great trophy. Other animals are great too!
And here I am, returning to Africa of many faces;.... the sloe-eyed temptress with flowers in her hair who stole my youth and my heart, and left me an old man with a kaleidoscope of conflicting memories of many dashed hopes and some fulfilled dreams. E. Echols

Thank you for sharing your hunt report! I think you got two very fine animals.

What great animals, congratulations on achieving your dream.

Well done. All three look great but the LDE and the Roan are exceptional. Especially love that black neck on the LDE - I assume this was in the rut?

Congrats on the hunt and for taking the time to share it with us!

My heart going into palpitations when I see a LDE. That a bongo and a roan are my dream hunts in an area like that. I keep buying lottery tickets. Congratulations on outstanding trophies.
Tommorow is promised to no one. Go live your dreams.

And thanks for sharing !

You did have a good hunting. Congrats.
Witold
L

Hank2211 said:
Well done. All three look great but the LDE and the Roan are exceptional. Especially love that black neck on the LDE - I assume this was in the rut?
Click to expand...

I think the rut is a little latter, the dark color is related to the "wintertime" months of Jan. and Feb.

I would love to hunt a LDE one day. Beautiful animals,well done.
You must log in or register to reply here.

J
Jaynecobb cal pappas Jaynecobb wrote on cal pappas's profile.
I hate to bother you....I own 2 of your books including British bore rifle. I was hoping you might have more 10 bore loads. For the heavier and later rifles. Any help would be appreciated.
Friday at 2:17 PM •••