Washington, DC - (August 31st, 2020) - The California Assembly voted to pass the Iconic African Species Protection Act (Senate Bill 1175). With misguided intent and a misleading name, this legislation will ban the possession and importation of twelve species of African game animals. Although the bill purports to “protect” these species, most of them, including elephants, lions, and rhinos, are stable or increasing in the range countries where they are currently hunted.

By reducing the revenues and incentives generated from regulated hunting, this legislation will have detrimental effects on wildlife populations and rural communities throughout Africa, which was highlighted by the African government and community representatives who wrote statements and testified before the Assembly to drive home the negative impact of this legislation.

The most troubling part of the legislative process surrounding this bill is the deliberate effort of elected officials in California to ignore expert voices from on the ground in Africa.

Weeks ago, members of the Assembly Committee on Water, Parks, and Wildlife willfully ignored two expert witnesses from Africa – Maxi Louis (Director of the Namibian Association of Community Based Natural Resource Management Support Organizations) and George Pangeti (Former Deputy Director of Zimbabwe Parks and Wildlife Management Authority). The committee did not ask these experts a single question about the impact of this legislation on their countries’ management, conservation, and rural development programs. Instead, they let the bill’s main sponsor, Senator Henry Stern (D), distort facts about hunting and COVID19 and twist the truth to fit PETA’s and Center for Biological Diversity’s talking points before the bill passed out of committee.

The Assembly committee also ignored written testimony submitted by the African Wildlife Consultative Forum, which included formal comments from organizations and government agencies in 10 different African countries, warning the California legislature how devastating the passage of this legislation would be for their livelihoods and conservation efforts.

Earlier this summer, elected officials in California also ignored the published opinion of Fulton Mangwanya, the current director of the Zimbabwe Parks & Wildlife Management Authority. Mr. Mangwanya addressed legislators in California and explained that the legislation, “crafted far away from Africa and without input from Africans,” would not achieve its purported objectives. Instead, he noted, “Our generation has witnessed unprecedented decimation of wildlife and habitat due to a misguided mentality that non-consumptive tourism – such as photography safaris – is a panacea for all conservation and sustainable financial requirements. It is not.”
The Assembly also ignored information which highlights the fact that revenues raised by hunting have underwritten the conservation of an area more than twice the size of the U.S. National Park System. This habitat is essential to protecting and growing the very species impacted by this bill, and its funding will be cut by bans like the Act.

Worse, the Act will reduce funding for in-state conservation efforts as well. The Assembly was warnedby the former head of the California Fish and Game Warden’s Association that the State already has one of the lowest numbers of wardens, per capita, in the country. Enforcement of the African species ban will pull these wardens away from their critical duties managing and protecting California’s natural resources and reduce their ability to pursue wildlife poachers.
“The California legislature has chosen to willfully ignore the opinions of wildlife experts while kowtowing to the political contributions of animal rights extremists. SCI members call on Governor Newsom to prioritize livelihoods and conservation by vetoing this unenforceable bill” said Benjamin Cassidy, SCI’s Director of Government Affairs.

Safari Club International and its members have been engaged on this legislation from day one, sending over 7,500 emails and phone calls to legislators in California in opposition to this bill. SCI will continue to provide a platform for residents of California to urge their Governor to veto this trophy ban.

Well, you have to realize who you're dealing with here. Those blathering asses are totally different from sane normal people. They run on distorted emotion instead of scientific fact and common sense. To them, if it feels good, do it. Don't consider the ramifications or damage it may do to anyone else anywhere else.

Whenever a person that is in a position of so-called power uses that position to push an agenda backed by only certain groups without consideration of all the factors and consequences is tragic.
When one party isn’t willing to even listen to another point of view, the disbelief and frustration for the other parties involved creates anger and emotion. Then all discussion goes out the door. I’m sure you all can think of way too many examples of that.

Consequently, the majority is caught behind defending and scratching back in order to simply be heard.

Everyone knows it’s harder to get a decision changed than it is to get it made.
So, to start somewhere, would a formal petition written in a way that does NOT emphasize hunting but rather the financial impacts to Africa, the businesses, equipment companies, etc., be highlighted and signed by all willing members here be a viable beginning?
If the decision makers won’t listen maybe the word needs to reach beyond to the real world/voters who might be willing to listen.

SCI reported this morning that the Act did not pass.

I also found it interesting that SCI in its own haste to spread the horror, got this story all wrong, complete with rebuttal.

As I read my emails, I thought SCI had simply emailed me the same notice twice. But the second email refuted their own initial report as erroneous and then proceeded to praise the California legislature on the inaction of the proposal, which ultimately meant defeat.

Mort Hill said:
I also found it interesting that SCI in its own haste to spread the horror, got this story all wrong, complete with rebuttal.

As I read my emails, I thought SCI had simply emailed me the same notice twice. But the second email refuted their own initial report as erroneous and then proceeded to praise the California legislature on the inaction of the proposal, which ultimately meant defeat.

“You stupid, no good, worthless, careless......oh, what, you didn’t approve? Forward thinking, conservation minded group of politicians”
Click to expand... 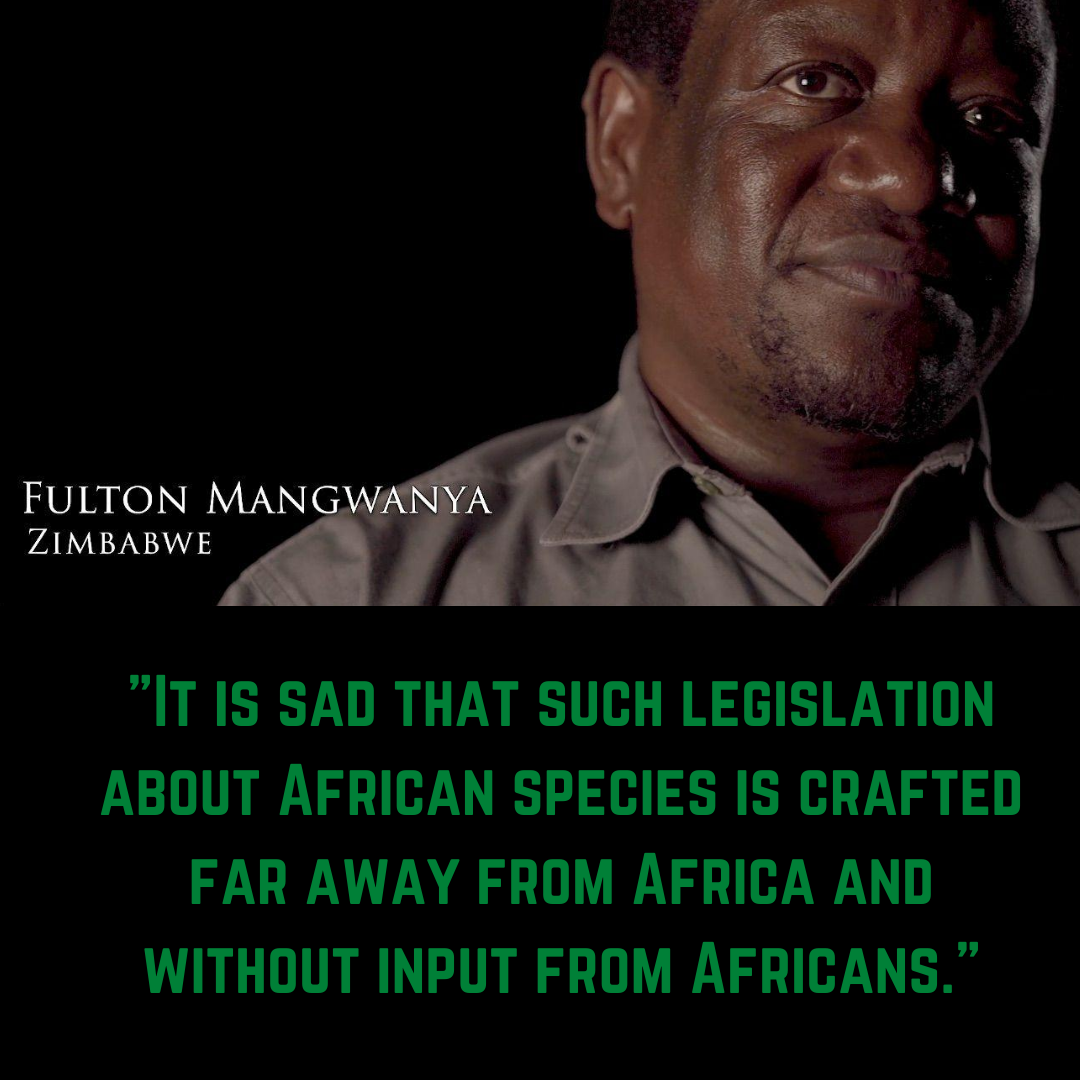 Late last night after passing on the Assembly floor, Senate Bill 1175 died before a concurrence vote could happen on the Senate floor. An earlier release sent by SCI in the fog of last-minute legislative action was misinformed by a report that the Senate had passed the bill when in fact, time expired before a Senate vote could take place.

Safari Club International played a key role in helping to defeat this bill from the moment it was introduced, all the way down the last minutes of the legislative session. SCI members sent more than 7,500 emails and phone calls to legislators in the weeks leading up to yesterday opposing this bill, and those efforts helped spark critical debates in committee hearings and the Assembly floor about the hypocrisy of this legislation that ultimately helped kill it.

SCI also helped coordinate and amplify key voices in Africa through testimony and strategic communication opposing this legislation. These crucial voices from the front lines of conservation in Africa included testimony from government officials like Zimbabwe’s Permanent Secretary of the Ministry of Environment and the Namibian Association of Community-Based Conservation Organizations. Like SCI, the affected countries and rural communities did not take the threat of this legislation lightly, but vehemently opposed the proposed legislation at every step.

“We are pleased to see this bad legislation fail in California and take pride in knowing our members helped move the needle on it.” said W. Laird Hamberlin, SCI CEO. “Safari Club International remains vigilant in defending the freedom to hunt and promoting wildlife conservation worldwide.”

Source: Safari Club International (SCI)
Jerome Philippe, Founder of AfricaHunting.com
You must log in or register to reply here.

For the California Members