Just want to share a short story of my last africa trip in august, in Zim. I was after an elefant bull and finally got him on second last day. Not a big tusker, but was a personal fight to get him

About the bushpig: I knew that they are tough, scary and like ghosts, hard to hunt.
One day we went out of camp we bumped into a small herd of 3 pigs, nearly daytime, no problem to see them clearly. I missed on one and kicked my a... :banghead:
BUT, it only took 15 minutes when we saw the next pigs, this time 5 of them in high gras, no chance to get a shot.
And now BUT, it again took 30 more minutes when we met the next 2 pigs, this time I was fast enough and shot the bigger one, old old male with broken tusks, but beautiful (if you can say that to bushpigs). Fully daylight!!!

Btw, I hunted with Terry Fenn at the South Shangani Ranch and it was a blast to stay and hunt with him for the second time!! 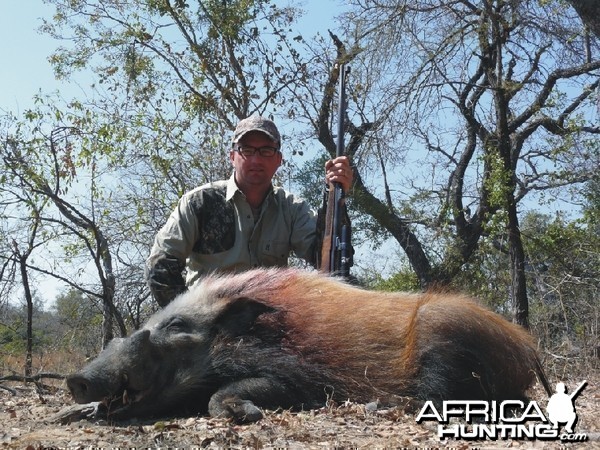 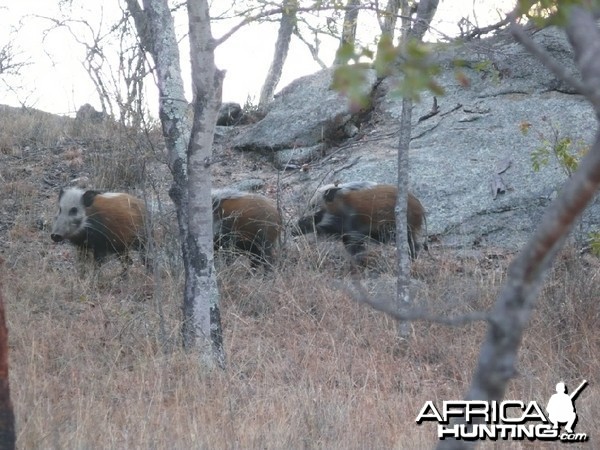 Nice pig! I'm headed to Zim in July and they are near the top of my list--I'd love to see some when its light out...

Nice trophy, lucky to see them in full daylight !

Seeing that many in day light was a rarity...

The trail cameras we had out earlier this year showed them going by after sundown...at all locations.

Got mine in Zim 12 years ago in broad daylight. Big pig, cool hunt. Spent 3 days chasing one in SA last April and never got a shot. It was feeding on a dead wildebeest and active every day but we just couldn't get up on it while it was around the area. Oh well. I'll see what Namibia has to offer again next April.

Unique trophy, awesome to get one in the daylight!

Daylight pictures, not trail cam pictures, that can not a hard or heavily hunted group or you are the luckiest guy on earth.
Congrats!
J

Hi Guys, yes not an easy hunt. I got one a couple of years ago, at 00h45 at night. Yes in the middle of night. We walked in macadamia nut orchids where the pigs cause damage to a farmers harvest by eating the fallen nuts. It was very nice, we walked with a spotlight for 2 and a half hours before we heard them crunshing the nuts, then we saw them through the night sight, brilliant experience, had one shot and I made it count!! One of my best huntimg experiences, want to do it again!

I should have saved the cape this year...the mount will look good next to the warthog in the hall.

BRICKBURN said:
Daylight pictures, not trail cam pictures, that can not a hard or heavily hunted group or you are the luckiest guy on earth.
Congrats!
Click to expand...

I think I AM a lucky guy ;-)
Will go to same place next year, wondering if we will see pigs again during daylight...
You must log in or register to reply here.

Any pointers on bushpig?
2

Bowhunting Bushpig in daylight with a bow! Who has done it?