Bushbuck In A Tree

This is no hunting report, but rather the tale of one of my fondest hunting memories I had whilst hunting with my Father.

Whilst studying in the Free State, I managed to land myself a job on a game farm over weekends and during University holidays. Here I got exposure to the hunting industry and being a student, I had to save hard in order to buy myself my first hunting rifle. This came in the form of a secondhand Musgrave 30-06 that I bought from a friend’s father. I eventually received the license days before one of my winter holidays started.

Dad and I got invited to hunt Gemsbok in the Kalahari. I managed to get a few days off from my holiday work, and returned to our family farm in the Natal Midlands in order to prepare for the upcoming Kalahari hunt a day before we were set to depart. With my very early morning arrival back home, Dad and I set out developing a crack load for my newly acquired Musgrave.

After sighting the rifle and a couple of test rounds fired in the after noon, I still had 4 rounds left and with a few hours of daylight remaining, I casually told Dad “lets go shoot a Bushbuck quick”….. yeah right! Go shoot a Bushbuck on a cattle farm with free range game quick – never! Well knowing that we still had to pack and load Dad’s Hilux, reload enough rounds for our Kalahari hunt and take care of a the last few chores we had to attend to, we went on our “quick Bushbuck hunt”.

Dad grabbed his rifle and off we were – we literary had to walk out the yard gate and we could start hunting. We however decided on hunting the big valley of the farm that would require us walking almost a 1.5 km’s to reach it. Walking there would also allow us to have a look at the cattle one last time before we depart and do the necessary inspections.

Reaching the top of the mountain and crossing over to the other side, we were coming up to a wash we had to cross before the big valley opened up in front of us. As we appeared on the other side of the wash, I almost doubled over at what I saw! There, on the other side of the valley, probably 450m from us, stood a beautiful Bushbuck ram sunning in the late afternoon sun, right on the edge of a young Wattle plantation just above a cliff face. Dad could not see it, but it was in any case too far for a shot. We stalked closer and ended up about 350m from the Bushbuck with no possible way of getting closer. I then took a log, rolled it into the track we were following and went to lay behind it, creating a perfect rest for the Musgrave.

With Dad now seeing the buck and lying next to me, we started talking about trajectory and shot placement in whispers. There was not really much time for chit chatting as the buck now turned broad side, offering a good shot. We decided that a high shot will need to be the order of the day. I slipped one of the four remaining rounds into the chamber of the Musgrave and settled the cross hairs of the scope in line with the front legs and level with his back. With the bullet drop at that distance, I should hit it squarely on the shoulder.

At the shot, the Bushbuck dropped in its tracks, I was very pleased with the shot and even more so that my “new” rifle had drawn it’s first blood. I asked Dad to stay on the spot from where the shot was taken in order for him to direct me to where the Bushbuck lay after crossing over to the other side of the valley.

Upon reaching the spot after quite a few yells of “Higher…..! Come Back down…..! Left…..! Right…..! WHERE…???? RIGHT THERE….!!!!” All I could find in the grass of where the Bushbuck was supposed to be, was a few smears of blood! Oh no! Not that with only 45 minutes of daylight remaining!
I asked dad to make his way over as quick as he can in order to follow up. As we all know, a wounded Bushbuck can be quite temperamental at times, so the back up from Dad would be welcome.

I then started looking for more blood whilst Dad made his way over, I just managed to follow the blood smears and the next moment the bushbuck burst out the grass running from right to left about 60m in front of me. I knew that this would require some precision shooting and with a new rifle, it would take a miracle to put him down. What made it even more difficult was that he was now running between the young wattle trees, and he did not even show any signs of being wounded.

I reloaded as fast as I could and took an off hand running shot at it – miss! The lead was too much! Reload again, knowing that this is my second to last round, aim, shoot…… wattle tree shot in half 10m in front of me! Working the bolt again, pressure now at the max since this is my last round and the Bushbuck opening the gap between us, I aimed and fired as soon as I had him in the scope. Silence!
It was the eeriest quiet I had ever heard in that valley. No birds, no crickets, no wind, no nothing! I was not sure if the last round had hit the mark, I could not hear the bushbuck running or falling. But what I was now acutely aware of, was that my rifle just turned into a battering club since I had no rounds left.

With the sun now critically low, Dad found me in the young plantation. I explained what happend and with Dad now taking the lead we started searching for blood. Nothing. Backwards, forwards, searching, worrying, praying, re-explaining each shot – nothing! Out of despair we walked the cut fire brake above the cliff when Dad noticed it. Drag marks, or something that almost resembling it in the cut firebreak.

No! Could this be…..? Cant be! I slowly approached the edge of the cliff face from the top and I peered over the side. There! Hanging by his horns in the fork of a tree growing from the side of the cliff, hung my Bushbuck!

The last shot I took at the running Bushbuck turned out to be a perfect heart shot that went through both shoulders. A luck shot? Most definitely! The buck tumbled and skidded across the firebreak at my last shot, slipping over the edge of the cliff, falling into the well place tree. After working our way round the cliff to the bottom of the face, Dad and I relocated the now Bushbuck bearing tree growing from a crack in the cliff side. With a short and easy climb of the cliff face I reached the tree and eventually managed to dislodge it from the tree, letting it fall to where dad was waiting below.

Both Dad and I could not believe it. How do you explain that you retrieved a Bushbuck from the top of a tree……?

I am sad to mention that I can unfortunately not show you any pictures of this spectacle. My camera was lost soon after this hunt and the photographs with it. 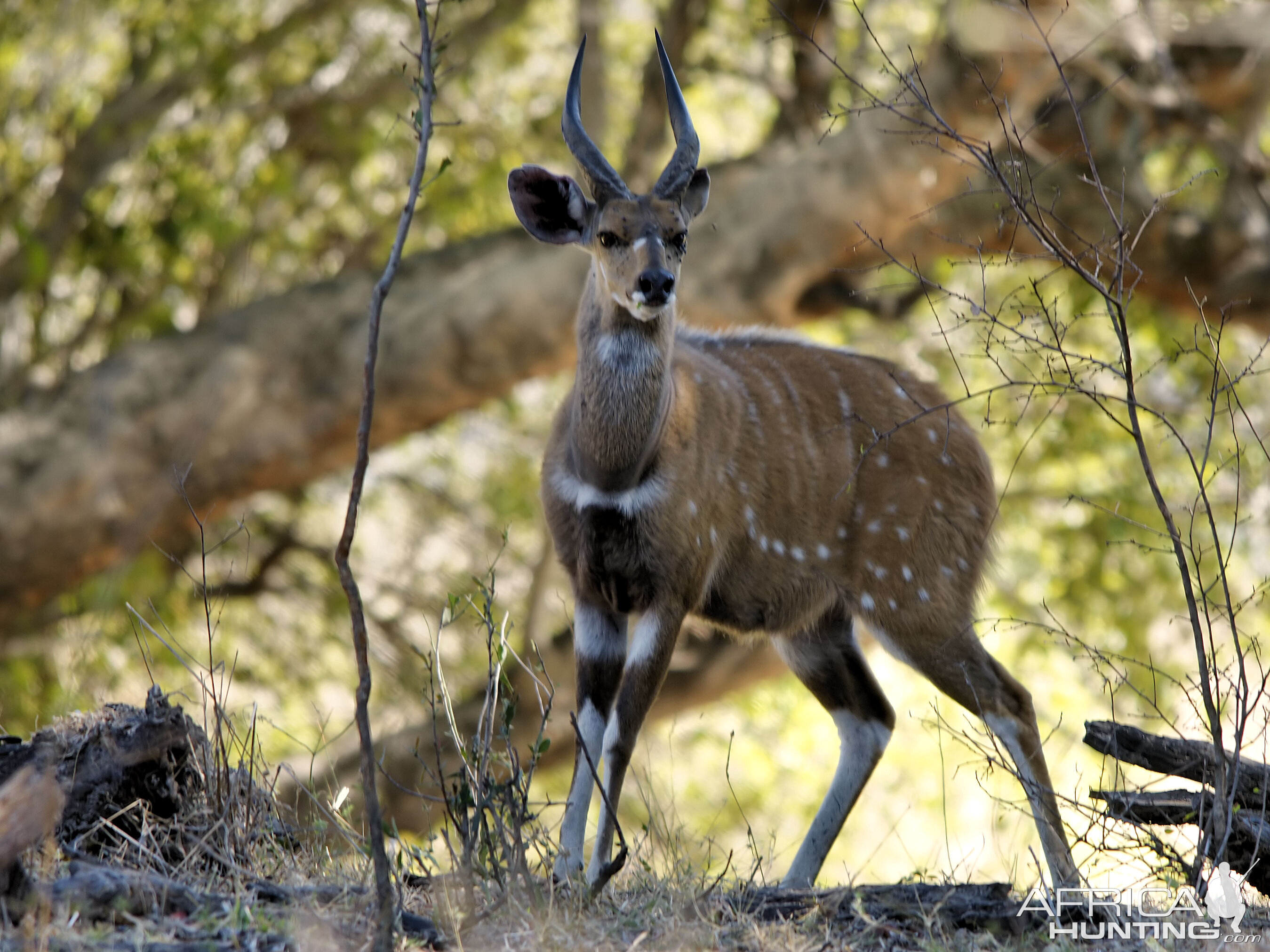 enjoyable read
on the ocean or in the bush.

Now that i enjoyed reading. Thanks for sharing

Great adventures in your back yard.
S

Memories are the greatest gift!

Great story. Thanks for sharing. Bruce

Thanks for sharing your memories with us.
And here I am, returning to Africa of many faces;.... the sloe-eyed temptress with flowers in her hair who stole my youth and my heart, and left me an old man with a kaleidoscope of conflicting memories of many dashed hopes and some fulfilled dreams. E. Echols

Thanks for sharing this great story !

Thanks for sharing that story. It brought back a memory of a hunt on a whitetail, where I saw a buck crossing the trail I was walking on and fired at him broadside with a muzzleloader. He jumped up hit and leapt into the bush. When the smoke cleared I could clearly see him standing in the thick brush just a bound from the trail and was about to reload and fire again when I realized he was stone dead and hung up in the thick brush. Thanks for bringing back that memory!

Great story. Very nice read.
You still have the Musgrave?

Fun story, thanks for bringing it back to life

The Musgrave spent a few hunting seasons with me, taking numerous PG species. I eventually sold it back to the original owner due to the sentimental value it had for him. I took that funds, and used it as a deposit on a Winchester Mod70 Super Grade, also in 30-06. I still use that rifle, and will it see its first action for the season in 3 weeks time from now.

Great story! . . .
I was thinking ahead of myself and expected you to go on to write that you returned in the morning to search for the buck and found it in the fork of a tree . . . placed there by a leopard
You must log in or register to reply here.

The Bushbuck From Heaven

What should I look for in a Bushbuck in South Africa?

A
The Old Man & The Tree