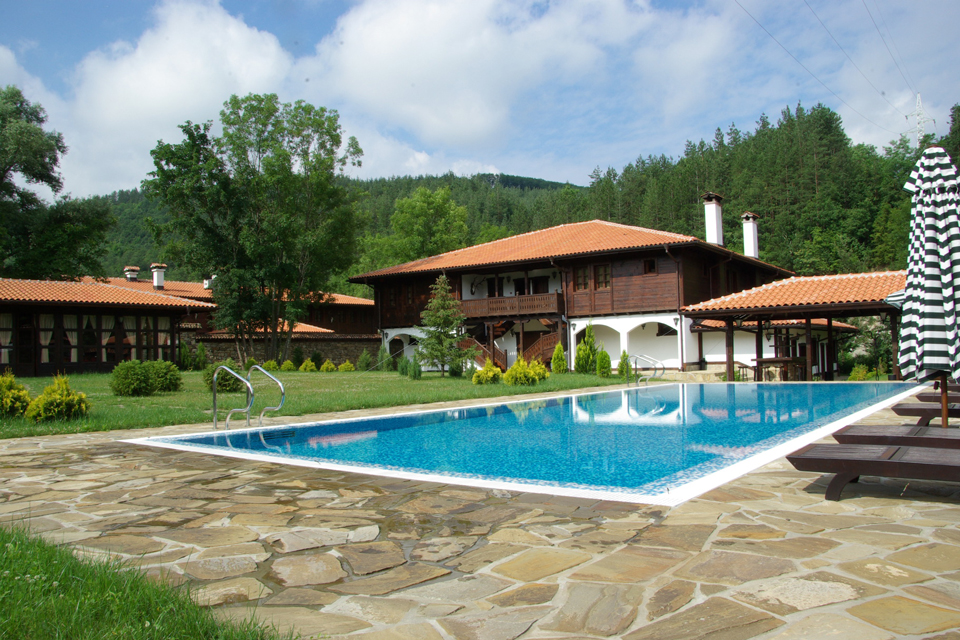 In the heart of the Balkans, there are not only wild boars, you can hunt for another gem: Bulgarian bucks. We were ready for a crammed weekend of action and emotion.

A last-minute cancellation at hand, the decision to go had to be made very quickly. “It’s yes or no, but you have to decide now !” and sure enough the answer was “yes !” A week later we found ourselves in Bukovetz, for a short trip lasting two hunting days. What madness!

Having arrived at the lodge in the middle of the afternoon, we enjoyed the usual warm welcome involving traditional Pitka bread sprinkled with fruit brandy, followed by an excellent lunch, and a short pool-side siesta. Before we knew it we headed out for the evening hunt. Much to our legs’ dislike, Dancho, the guide, brought us onto a high plateau where we soaked in a view that uncovered all the surroundings below us. For as far as the eye could see, the panorama comprised of thick forest interspersed with vast, flower-clad fields. It was as though we were in an era that was only known through history books, where cars, along with pesticides and tractors, were still rare. We silently advanced in the shelter of a hawthorn shrub and regularly scrutinized every meter of the meadow, on the lookout for a reddish spot in the middle of the tall grass that swayed in the light easterly breeze. The flower diversity was outstanding; carpets of wild orchids softened our steps. Captivated by these floral masterpieces, we almost forgot about the hunt, until Dancho came to a sudden halt: two sows traversed the plain a few hundred meters in front of us. 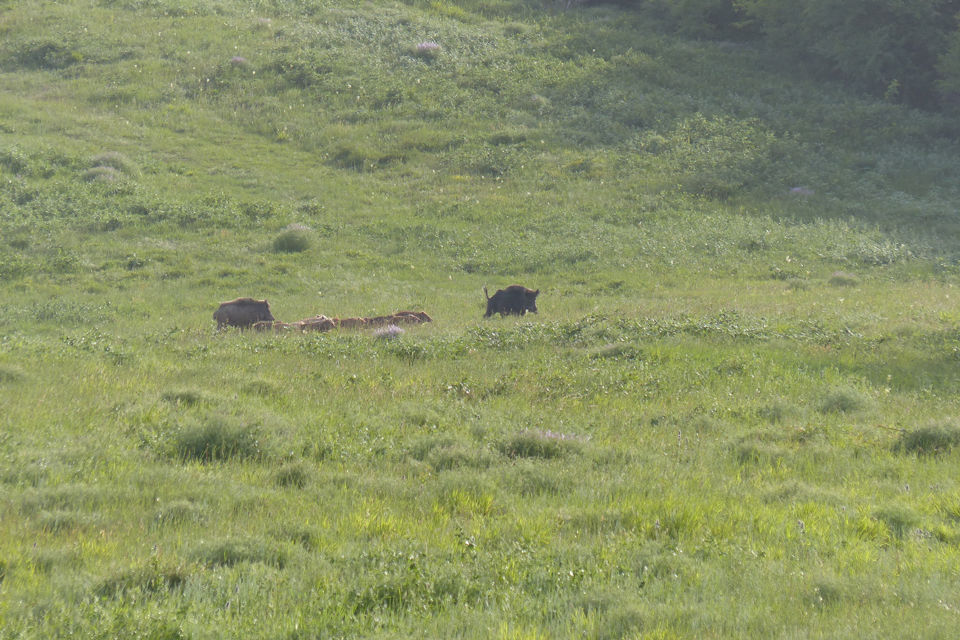 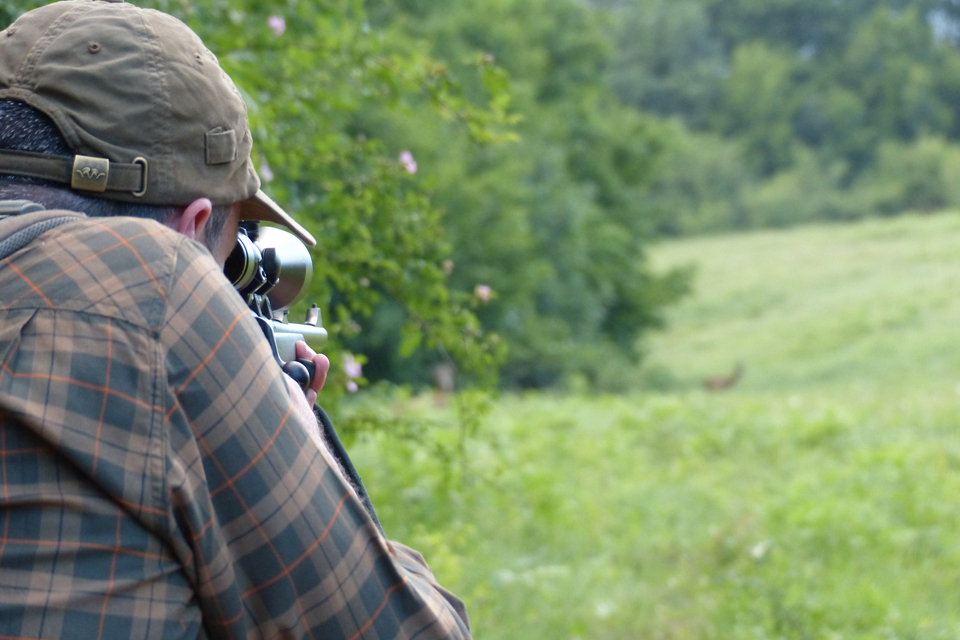 Next morning around 3:30 am we found ourselves in a spot not far from the area which we’d visited the previous evening. According to Dancho, a fine buck ruled over this section and we would attempt to locate him. Quite quickly indeed, even before the rising of the sun, we stumbled into the sought-after individual head-on. However, pulling off a precise shot in a few short seconds after an equally short night was not successful, and the buck escaped unharmed.

In the afternoon we departed heading north. After an hour of driving, the car stopped not far from a village that appeared to be straight out of the Middle Ages. Here the extensive mixed and livestock farming gave the countryside a bocage appearance, everything was regularly interspersed with small groves of trees. It was a paradise for roe deer ! After a mere 200 meters of silent marching, Dancho stopped in the middle of the trail. 80 meters away on the left a buck was feeding greedily on the lush grass in which he was standing. The shooting sticks were propped up, and Dancho whistled lightly to call the animal to a halt, causing him to raise his head, which soon after collapsed. It was still quite early and we decided to continue hunting. That evening, St. Hubertus must have been watching, and after having moved a few hundred meters we spotted a fantastic buck bounding away from us towards a heavily brushed hedge. Mimicking the barks of a roe, Dancho signaled us to go after the animal. However, the buck was too frightened and only aggressive barking signaled its ever-disappearing presence. An hour later we climbed a small hill from which we spotted again our buck. Before he had a chance to leave the place, the Helix let the small .222 bullet fly and it was the last sunset for the king.

The next morning, we left the Bukovetz lodge in the middle of the night and set out towards the mountain. Today Dancho had planned a long walk that would take us from the bottom of a valley all the way to the plateau-shaped summit. Thereafter we’d finish by visiting an abandoned village that had been empty since World War II. As anticipated, the outing began on a forest path that followed the valley bottom and was skirted by a torrent of crystal clear water whose uproar masked the noise of our footsteps on the stones. The sun rose quickly over the surrounding summits, but a certain freshness remained along the edge of the flowing water, something we didn’t mind. We meticulously scrutinized the banks that had been stripped by the foresters the previous winter. An abundance of beech tree waste represented potential temptation for the roe and red deer, of which we spotted a herd hastily trying to reach the closest available protective cover. Finally, after two hours a red spot caught our eye. A buck was concentrating on marking his territory and was energetically rubbing his frontal glands against a young holly bush. According to the rangefinder, he was 231 meters away. Clouds had invaded the sky and the wind continuously changed. Dancho proposed we swiftly take advantage of the current situation. The shooting sticks offered 4 stable support points, and Dancho stood to the right to act as a steady rest for an elbow. The bullet smacked the buck, who died even before hearing the shot. We walked up to him and once again noticed how voluminous the Bukovetz bucks’ antlers grow, without weighing that much on the scale and hence, tipping the trip’s budget. It was a real pleasure. 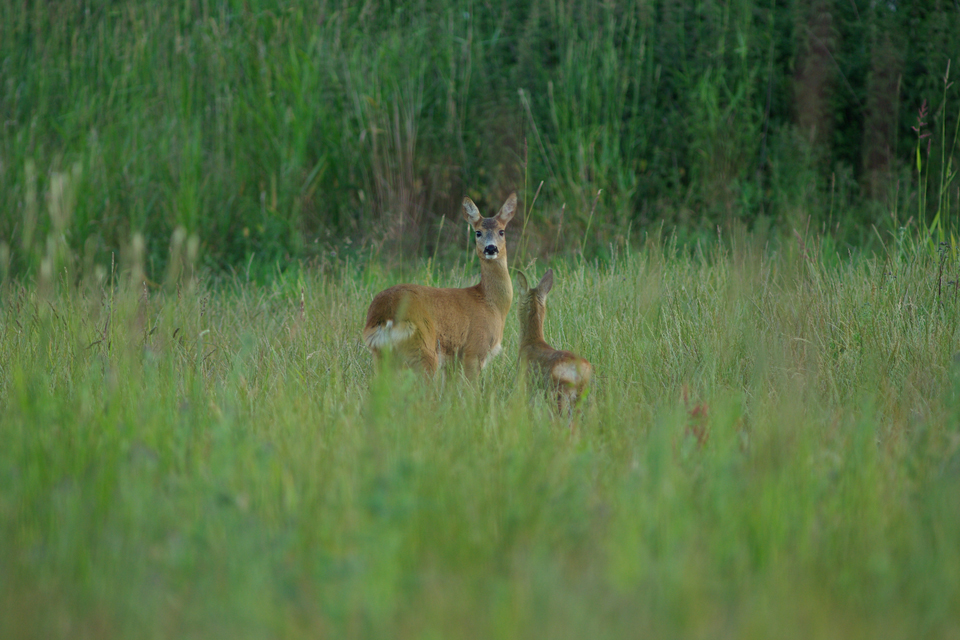 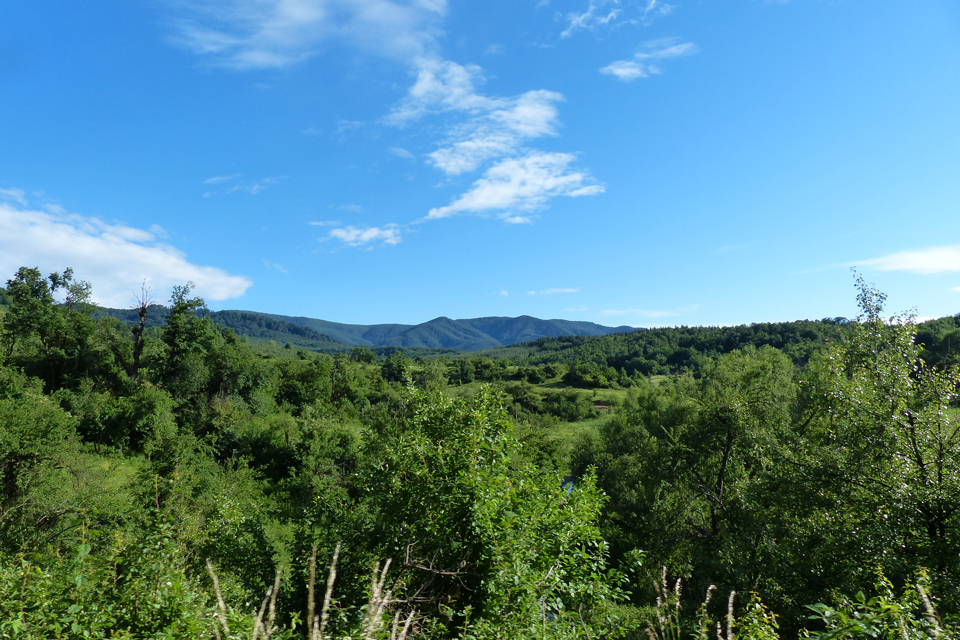 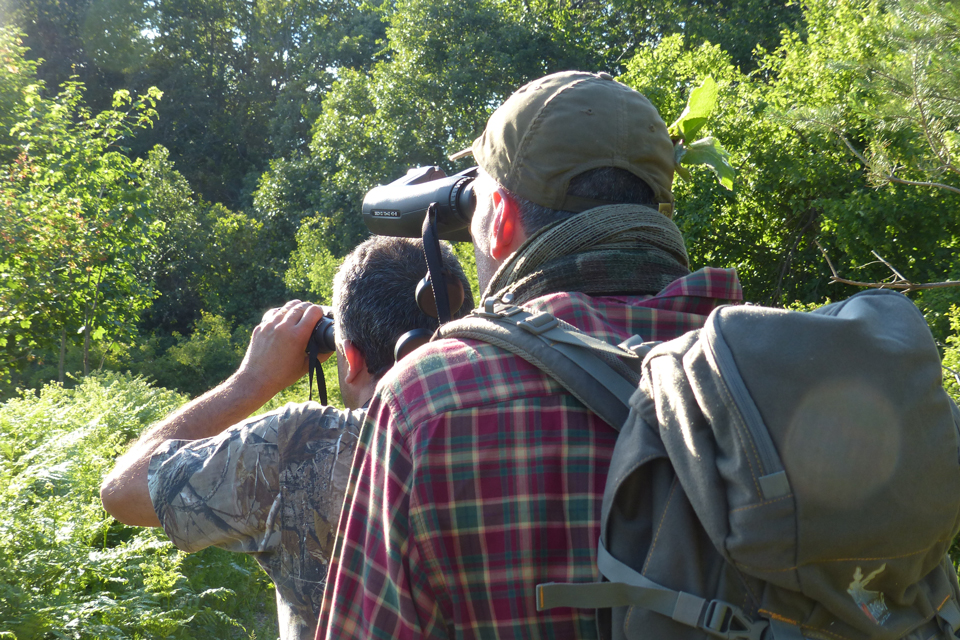 Our goal had been achieved, and it was with a light heart that we decided to wrap everything up by climbing the mountain to reach the ghost town. It was an impressive place, which we beheld with mixed feelings. The first being strange and solemn, as we reflected on the fate of those that had lived here and been hunted down by the communist regime. The second feeling was of serenity, as we watched a buck carefully distancing himself by weaving in and out of untamed grasses and rustic flowers which had overgrown the tombstones in what was now a haven of peace. 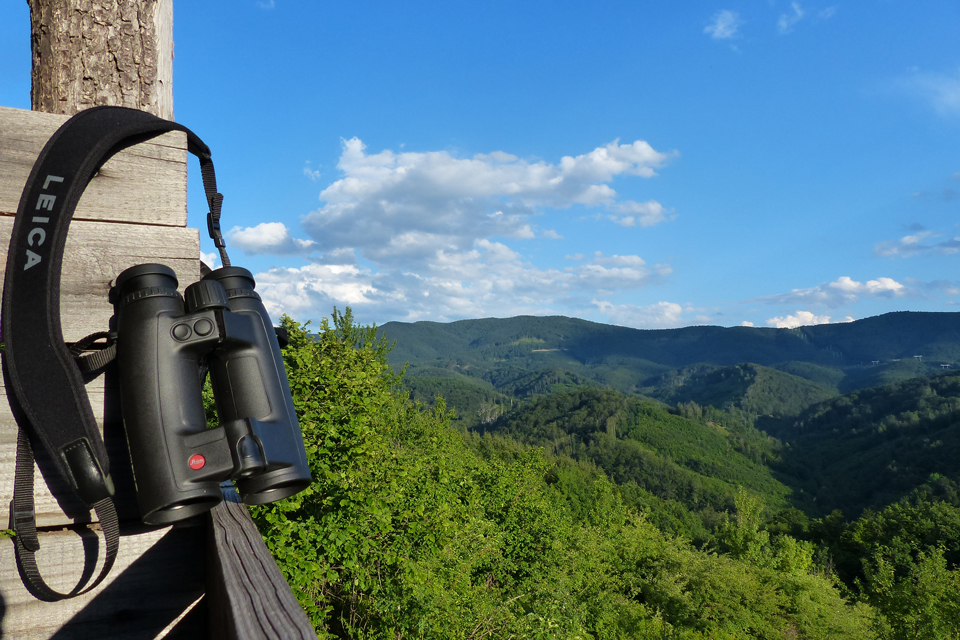 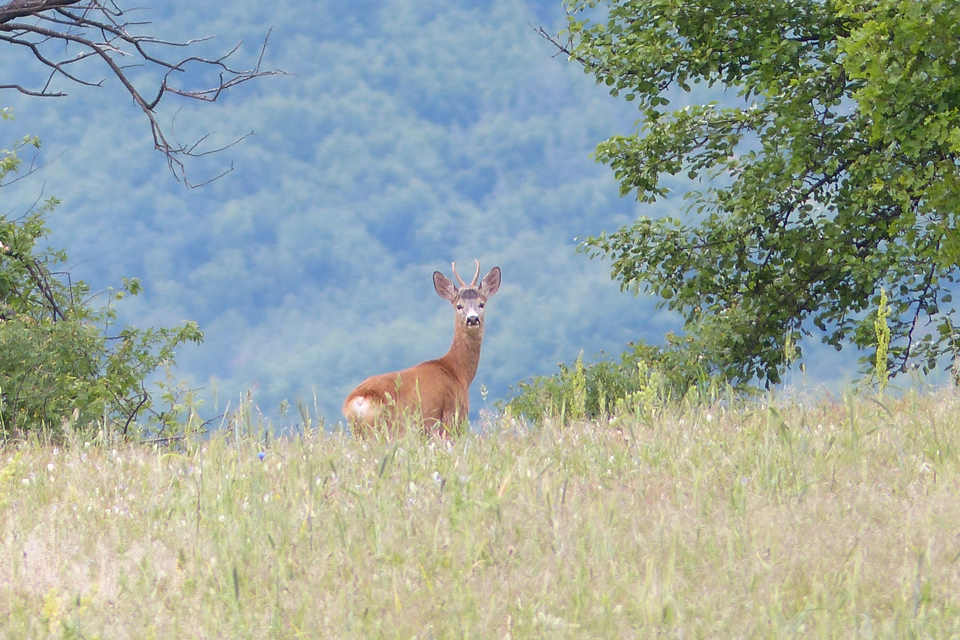 Leica Sport Optics
A heritage of exceptional sport optics innovation and performance
+1 (800) 222-0118
Website us.leica-camera.com
Click HERE for a dealer near you
S

I'll take off the beaten path every time.
You must log in or register to reply here.

The Beach Underneath The Wig

Roe Rut In The Hungarian Heat