My first acquaintance with this particular leopard was back in July 2010. At the time I was guiding a client on a leopard and general plains game hunt on Zimbabwe's vast Bubye Valley Conservancy. We'd used zebra quarters as bait, spread across an area to the north of Nengo camp, and eastwards onto the Bubye river, where we'd found the huge cat's tracks. Zebra is my preferred bait, because the meat has a high yellow fat content and seems irresistible to leopard. It wasn't long though, before he showed us just how wily he was he'd hit our bait once, and never return. We also hung a complete impala ram which the cat found, and promptly cleaned up, leaving a tattered empty skin, with meat stripped bones hanging, and nothing else. We never got that cat, however, I was determined that one day I would.

In June 2011 I was hunting out of the same camp with Jamie Cox from the UK. He was on a buffalo and general plains game safari, although at the time, we were also planning a July 2012 leopard and plains game hunt. I spoke to Jamie about the big cat and mentioned that it might be worth booking the same camp, and trying to succeed in getting what would undoubtedly be a magnificent trophy leopard.

As if to rub it in, on our penultimate morning in camp, at about 0600hrs we were sat by the fire with Jamie's son Josh, when we heard either a young waterbuck or a wildebeest bleating in distress while being killed in the bush beyond the waterhole in front of the camp. I thought it was a lion doing the killing, but that evening we heard a monstrous leopard grunting down at the waterhole. This went on for a while, before he moved off, and it was obviously the leopard that'd done the killing. Jokingly, I said to Jamie, "We have an appointment with that cat next year" - little did either of us realise how true those words would prove to be.

Jamie and Josh arrived in Bulawayo, on Friday 13 July 2012, and we went straight into Nengo camp. On 15 July Josh shot a big zebra stallion, and we soon had four haunches hung as leopard bait, and two of them specifically sited to try and intercept what I was sure was the big cat because we'd located his familiar tracks in the Bubye River bed south east of camp. On the morning of 17 July, we found one of these baits had been hit, and by the same cat. Not wasting time, we built our blind, checked the rifle for zero at the exact distance from blind to bait 53m and by 1530hrs we were sitting.

Early that evening, a lion pride began performing close to where we were sat, and a black rhino nearly walked into the flimsy back of the blind, causing Josh a moment of concern. At 2100hrs (on privately owned land in Zimbabwe, artificial light may be used for leopard hunting) with no sign of the leopard, we called the trackers and vehicle in, and returned to camp.

Next morning, we found that after we'd vacated the blind, the lion pride had arrived and spent time beneath the bait tree, causing the leopard to stay away. Despite our sitting for another two nights, the leopard never came back. We had other baits out but they were being hit by female leopard only, and one zebra haunch was stolen by poachers. Because of our need for bait, a few days after Josh had shot the first zebra, Jamie also shot a mature zebra stallion, and we hung two of its haunches, keeping the shoulders in reserve.

Things then went quiet, until we again found the big cat's tracks in the Bubye River near a waterhole, and he appeared to be heading north, upstream. One of our bait sites was about 5km north of this waterhole, and not far from another natural pool in the river, and it was a bait site we all felt good about because his tracks, although not fresh, were also in that vicinity. A slight worry though was that the tracks led right past where I'd hoped to build a blind in the event of him feeding. Speaking to my trackers, we decided to cross that bridge when we came to it.

Each morning though, when we checked the bait, we found it untouched although it was starting to putrefy nicely. On 21 July this all changed. On our early morning drive by, the trackers excitedly remarked that it looked as if the bait had been hit the previously cut branches hung as camouflage to keep vultures off the bait had been stripped off part of the bait, and were lying festooned on the ground under the tree a good sign.

Tracker Barnabas and I went down for a closer look, and found that the big cat had fed, and a fair amount, he'd also ripped a chunk of meat off the bait and it had got hooked up on a branch to one side. His tracks were in the sand at the base of the tree, and fortunately when he'd departed he'd gone south past the waterhole and straight into the dense reedbeds. We also found where he'd rested after feeding, guarding his 'kill' as such his large body shape and tail sculpted into the river sand. We still had to be extra careful when sighting the blind, and I was also concerned this particular leopard, true to his normal behaviour, wouldn't return to the bait. Our other worry was lion, because if they turned up, the leopard definitely wouldn't show.

First however, we returned to the previous blind site, collapsed the blind, and cut more fresh camouflage, then brought it all forward to the new site and erected it. We also adjusted the bait, to ensure it was positioned in a manner which would have the leopard feeding broadside on to us when Jamie took his shot. All of this was done as quietly as possible, although I couldn't place the blind further than 40m away from the bait because of terrain, this was a bit close when hunting a wily old cat, and so it did worry me.

By 1545hrs we were in the blind and I'd instructed the trackers to return with the vehicle at 2100hrs if they hadn't heard a shot. Normally a PH tries to keep blind occupancy down to two, the client and PH because of noise factor. On this hunt, there were three of us because Josh wanted to experience the excitement of the hunt with his dad, and vice versa. Silence in a leopard blind is critical to the success of the exercise, and particularly so during the transitional period from day to night. Jamie and Josh sat unmoving, and once it was dark I hardly knew they were there.

As the sun set, bird song quieted, and aside from a few impala snorting to the rear of the blind, there was no other noise. Suddenly at 1745hrs the leopard gave two throaty grunts Haugh Haugh in the reedbeds on the opposite side of the river, and downstream of us then all went quiet. At 1820hrs we heard his saw like grunt closer to us, right at the waterhole about 80m from the bait tree, again a deep throated Haugh Haugh and then nothing. It was pitch dark and we couldn't see a thing in or outside of the blind, so we just sat quietly with our ears straining to pick up any sound in the vicinity of the bait tree.

By 2000hrs I was starting to think the leopard had moved off and wouldn't come in to the bait. Leaning forward in my chair, as is my want when listening inside a blind, I was reflecting on how many days we had left and what else I could try, in order to get a leopard for Jamie my mindset having virtually accepted, that this cat had once more outwitted us.

Just then, I heard the faint but distinct crackle of dry leaf matter being walked on the sound had come from the base of the bait tree. Tapping Jamie on the knee, I leant even further forward, and glancing at my watch saw that it was 2012hrs. Suddenly we heard it again, more distinct leaves and dry twigs being disturbed, and then at 2014hrs the cat scrambled noisily up the tree determined and confident. He then immediately began to strip the camouflage off the bait, striking the branches and sending them spiralling earthwards. Then he bit into the zebra rib cage, a loud crunching sound that carried through the darkness.

Leaning towards Jamie, I whispered, 'That's definitely the big cat, when I light him up shoot him' and then I quietly stood up, pointed the red lens spotlight skywards, switched it on, and then brought the beam down in a slow arc onto the bait. The leopard was exactly where he should have been, standing on the branch broadside on. He paid no heed to the red beam and Jamie placed the .375 H&H soft nose bullet into the centre of the shoulder. In tandem with the shot, the leopard did a backward flip and disappeared from sight. We heard it crash off into the reedbeds without any vocal noises, and then just as suddenly all went quiet.

Jamie felt it was the best shot he'd ever made, and I was convinced the leopard was dead. When the trackers arrived, we moved down to the bait tree and found blood and then two trackers and I, using the spotlight, followed the blood trail into the reeds, my 12ga 3 magnum hard in my shoulder. Those were tense minutes, but we soon found the leopard lying dead a magnificent cat, whose skull measurements using the SCI system were verified as scoring 17 10/16 making him a contender at the annual year end ZPHGA function, for possibly the biggest leopard taken in Zimbabwe during the 2012 season. 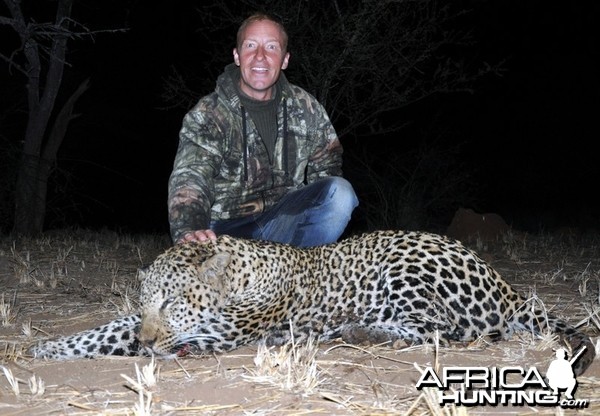 Excellent.
I felt I was there for a minute.
I so want to do this.

Always enjoy your stories, thanks. Congratulations on outwitting such a fine animal.

Congratulations.
Thanks for sharing your story.

Good hunt. Sometimes its better to be lucky than good but it never hurts to be both!
Why we hunt, even lions? Real hunters need thriving wildlife, so we help make it happen. - Olivia Nalos Opre

Thanks for sharing the story, excellent leopard, very good read

Thanks for sharing the story. Makes me even more impatient to hunt leopard!

Thanks for sharing !
You must log in or register to reply here.

The Old Dagga and the Leopard

Leopard in the tree...