Well as we dont know when we will be able to hunt again i will use this thread to keep everyone informed on whats happening at Bos en Dal Safaris.

Here is the first two brutes i have spotted!!!
First up is a massive impala male. He was elusive so here is a short video of him

Next up was these two wildebeest bulls but look at the boy on the right!!! Propably not the longest bull but he is heavy in the bosses and he drops like a buffalo!!!

You have some nice animals roaming your farm. Thank you for sharing.

You are making it hard to wait another year!
Keep Louie away from that Impala!

We need to figure out how to keep Gerrit away from that impala!

Yesterday was my youngest daughters turn to join the hunting comunity!!! After a quick session on the range she showed that she was ready and comfortable with the rifle!!!
The gear used was dad's 243Win with Hornady 103gr ELD-X bullets. 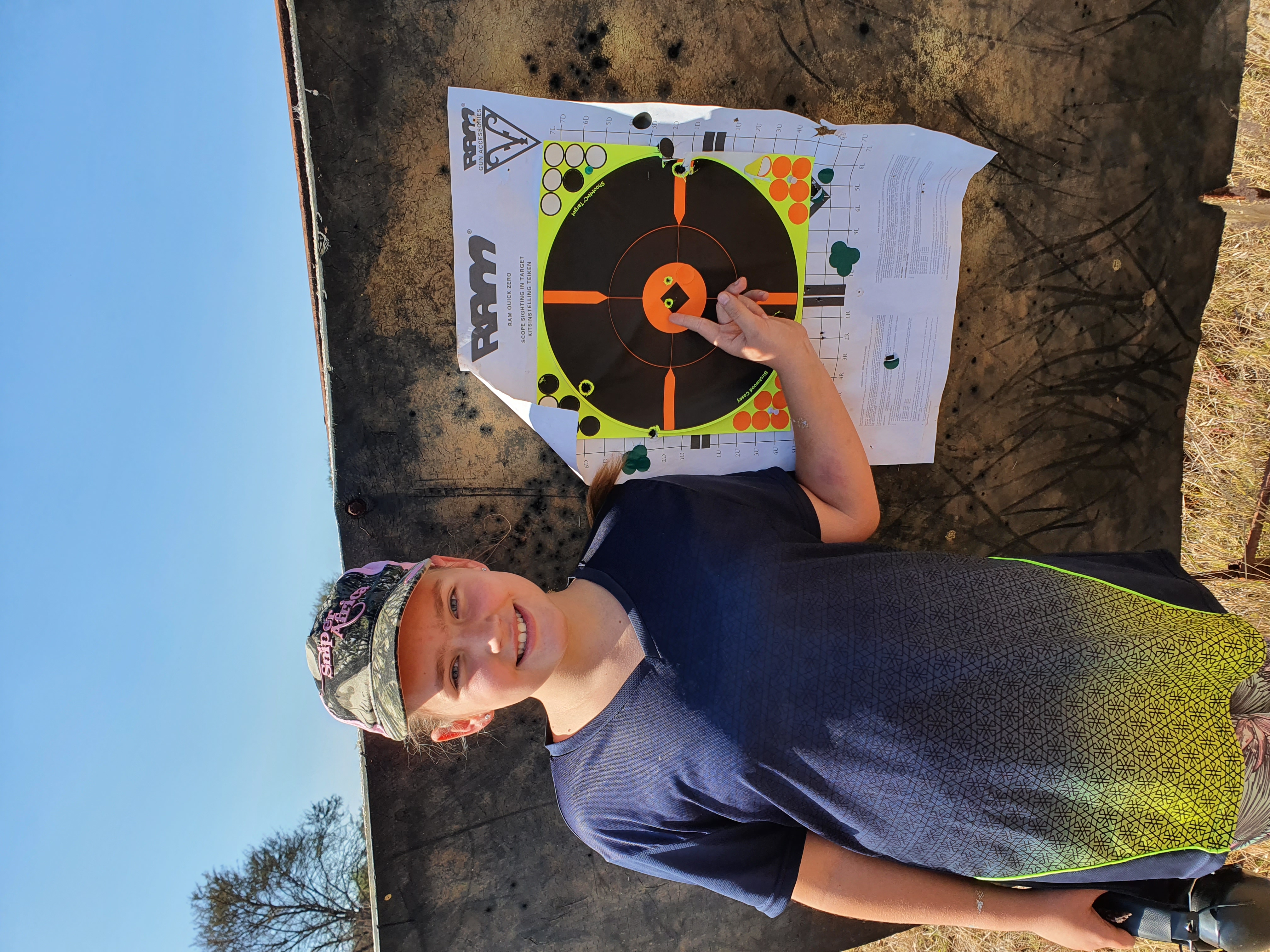 After a couple of hours we managed to find this impala ram at 60yards. She made a perfect shot and droped him right in his tracks!!! Super proud farther here. 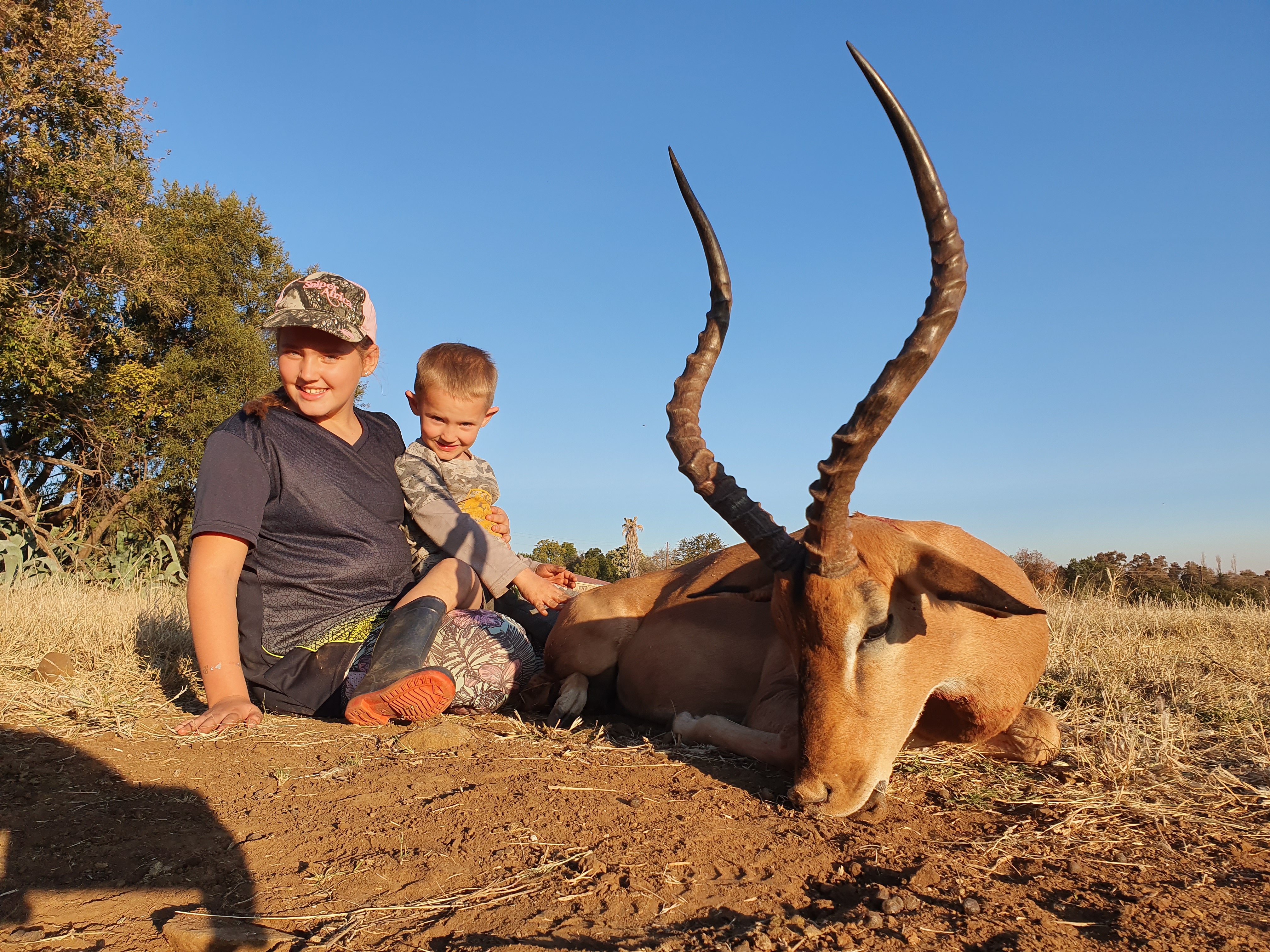 Now the problem with hunting kids is old sis also wanted to shoot something as she has not taken anything this season.
So she was fortunate enough to find this very nice white blesbuck ram, again the 243 made quick work of it and it expired within 20yards from where it was originally shot thanks to good shot placement!!! 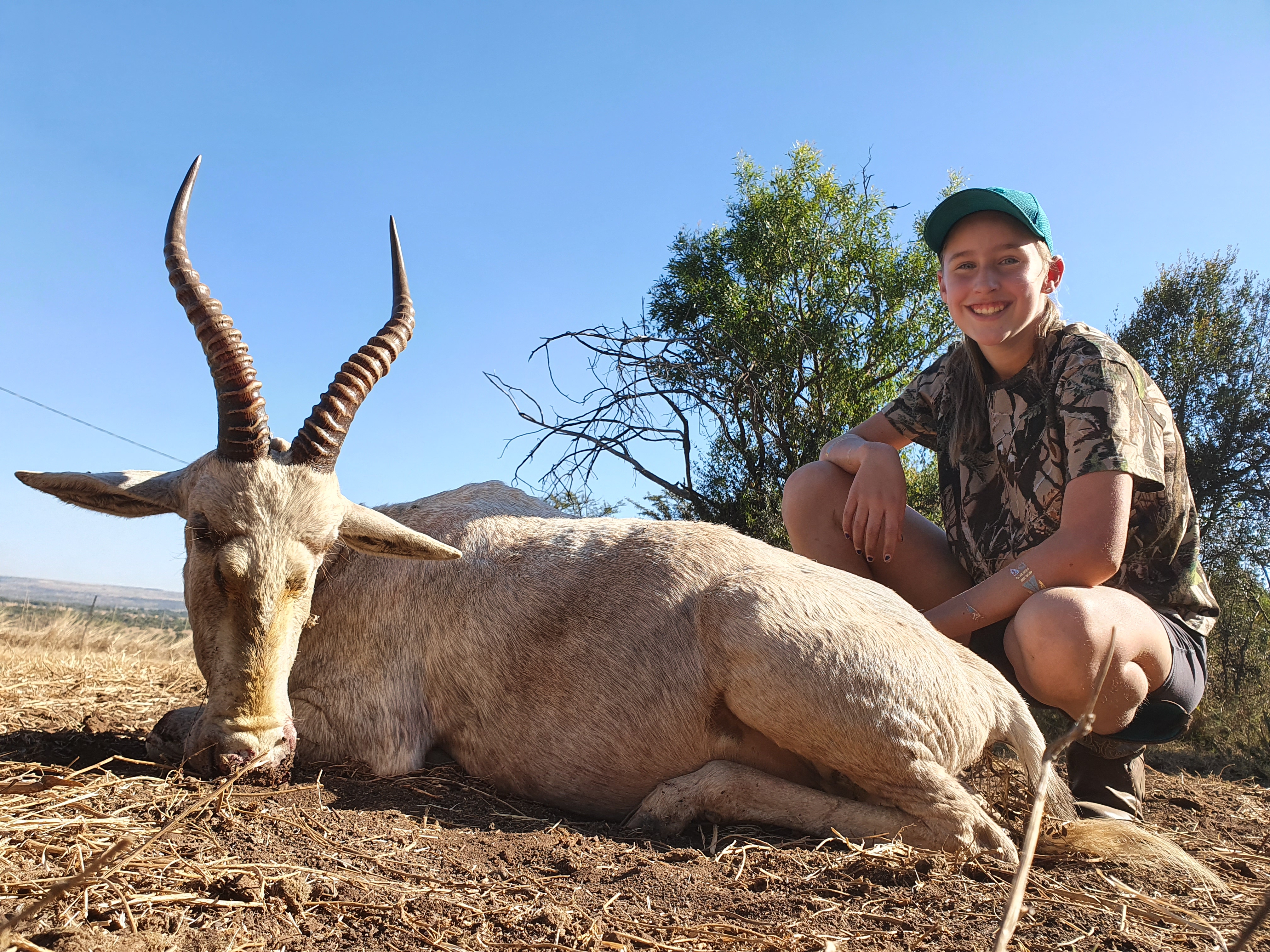 Very well done, congrats to your daughter's you should be proud.

@Mark Biggerstaff now we have to figure out how to keep Gerrit, Louis, and all the kids away from my impala... help!

mdwest said:
@Mark Biggerstaff now we have to figure out how to keep Gerrit, Louis, and all the kids away from my impala... help!

Your Impala! You mean My Impala.

Outstanding shooting by both... Well done!
GA Hunter 2/2/2019: "....tell your outfitter and PH that a big kudu would mean a lot. Then go enjoy yourself and take what the bush offers."

Today a hunting dream came true, I hunted my first animal with my double rifle chambered in 500NE, and what a better animal than this magnificent Sable bull!!!! It presented me with a quatering away shot at around 40m and the 500 dropped him right on the spot!! And what made it even better my 4year old son was with me when all of this played off!!! I couldn't have asked for more and is so greatfull for this 47+ inch Sable bull!!!!! This monster will find a special place in my trophy room for us to remember him for years to come. 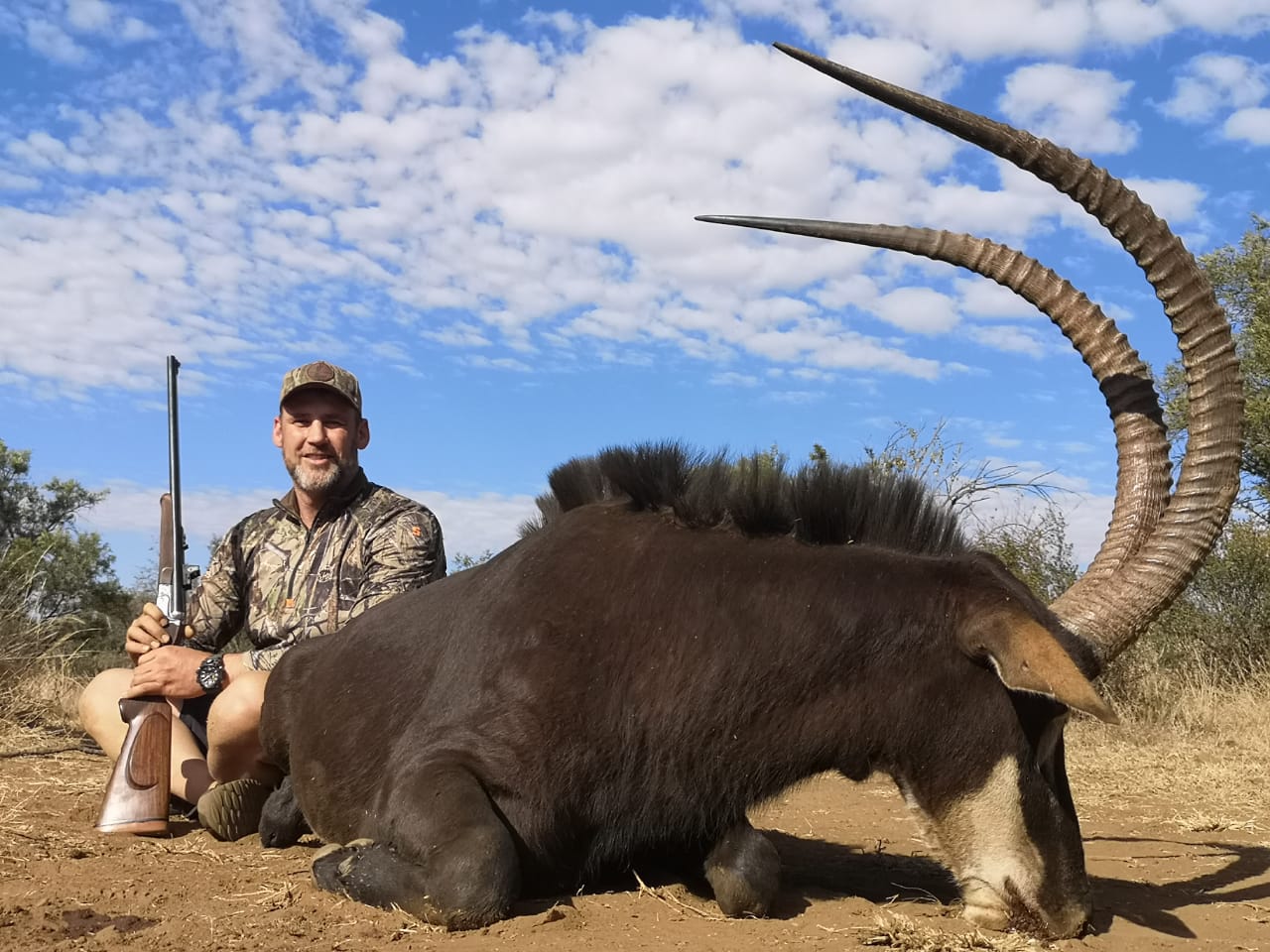 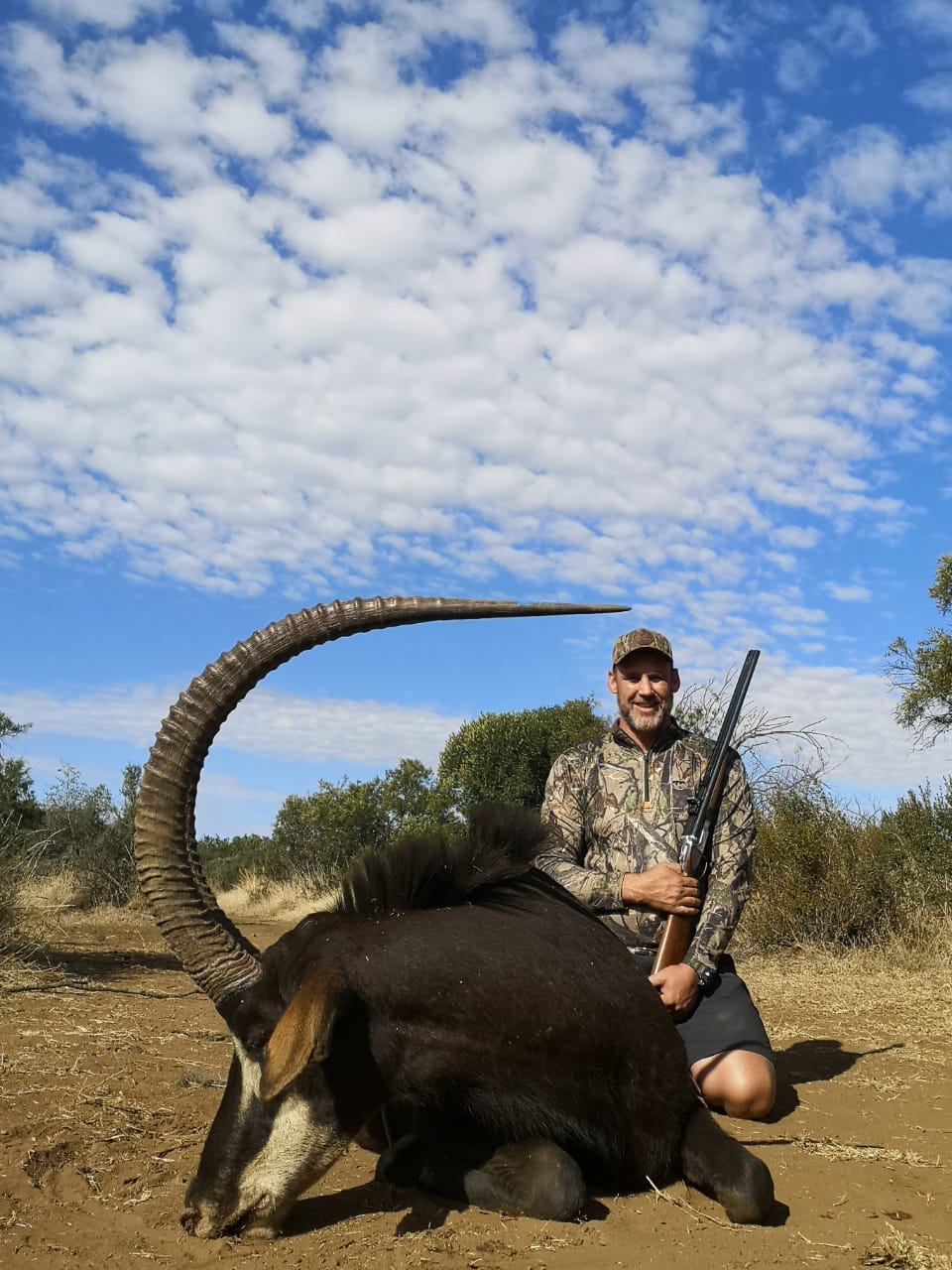 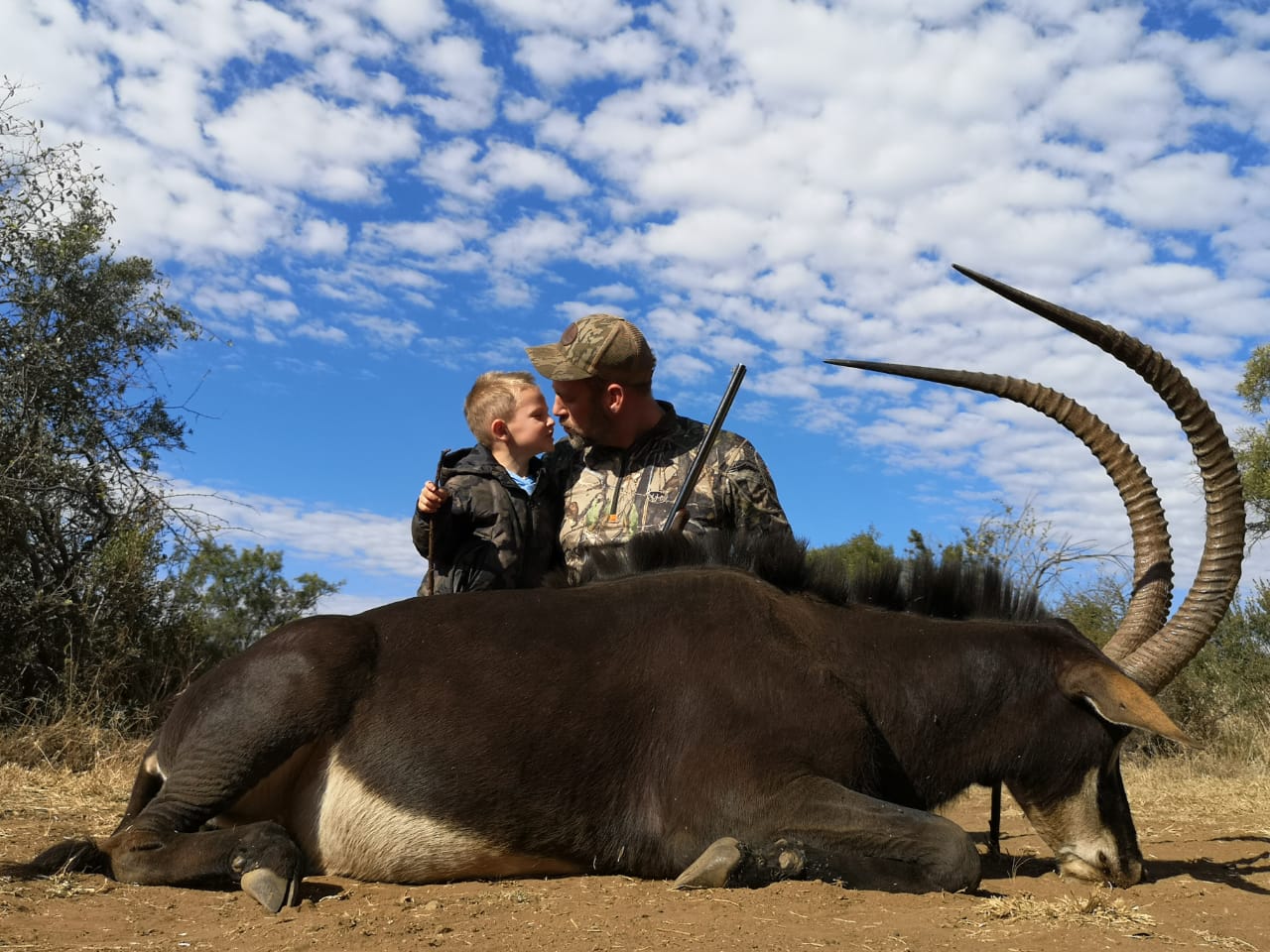 Here is the first two brutes i have spotted!!!
First up is a massive impala male. He was elusive so here is a short video of him

Next up was these two wildebeest bulls but look at the boy on the right!!! Propably not the longest bull but he is heavy in the bosses and he drops like a buffalo!!!

Enjoy and i hope we can all be hunting real soon
My personal best
Gerrit
Click to expand...

I just enjoy listening to the call of the cape collard dove. Close my eyes and I feel like I'm there.
And here I am, returning to Africa of many faces;.... the sloe-eyed temptress with flowers in her hair who stole my youth and my heart, and left me an old man with a kaleidoscope of conflicting memories of many dashed hopes and some fulfilled dreams. E. Echols

Spoted this Nyala bull a few weeks ago limping with one of his rear legs, on Monday i spoted him again and saw he lost a lot of condition and decided to take him out as it does not look like he will survive the winter.

Now i have a 28.5 inch Nyala that will hang on my wall instead if rotting away in the veld somewhere eaten by scavengers!!!
In the photo you can see the poor condition he was in. 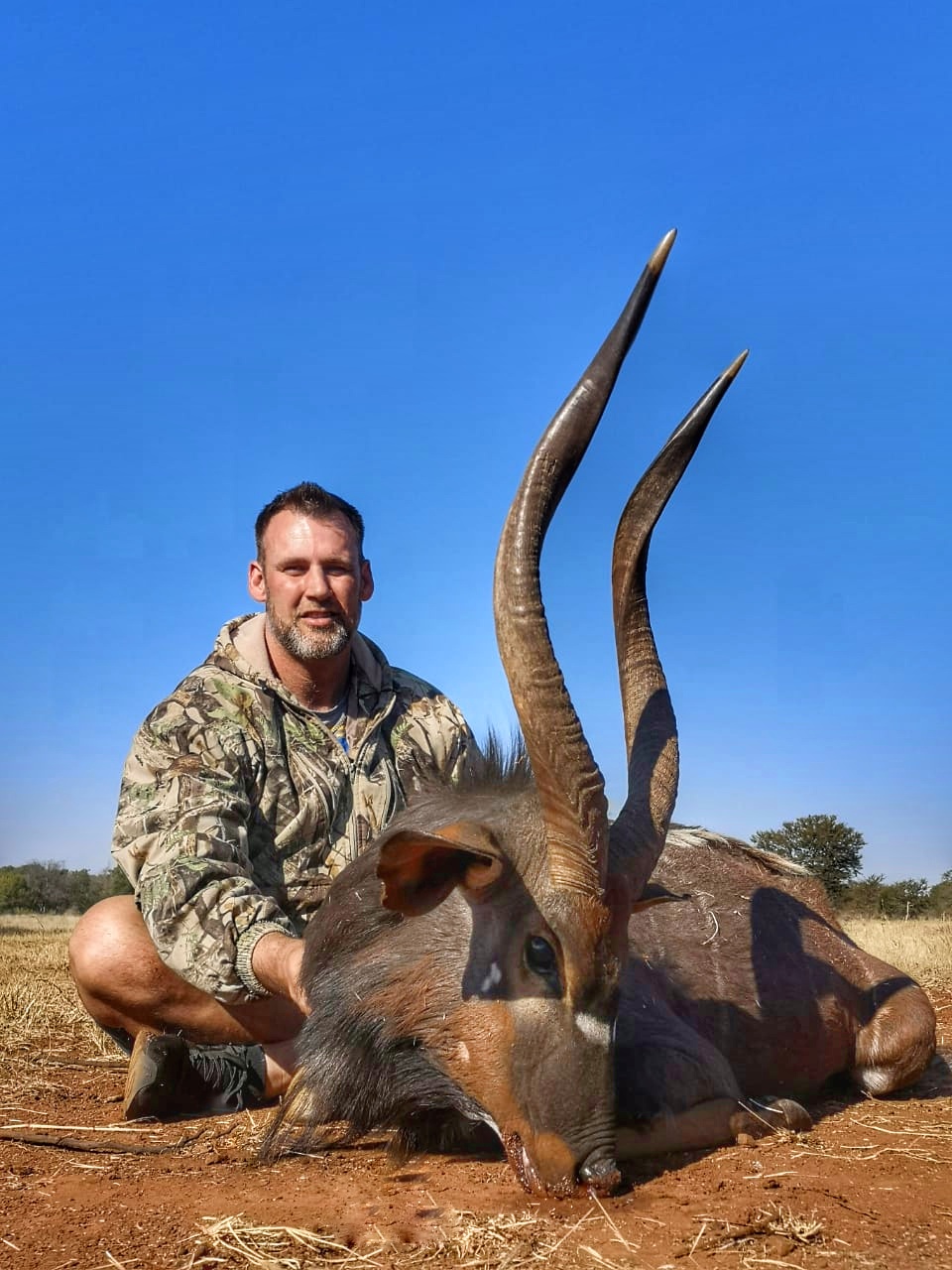 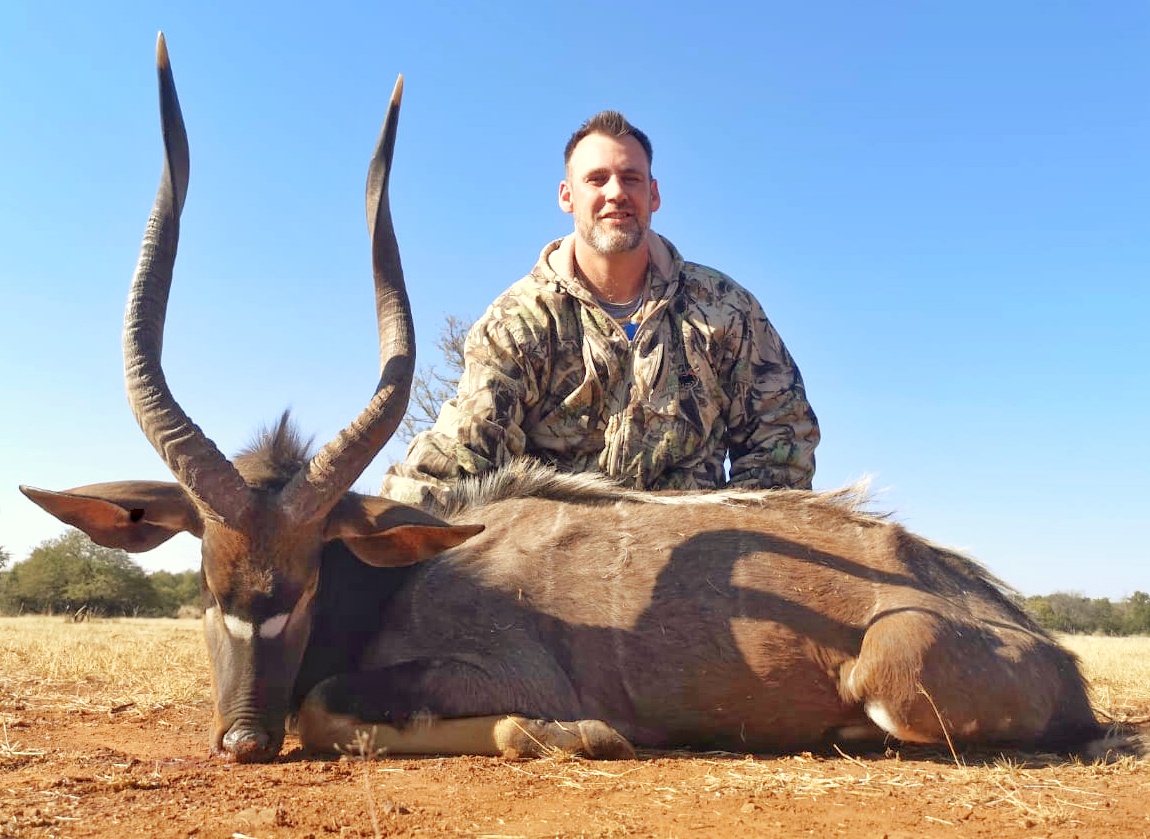 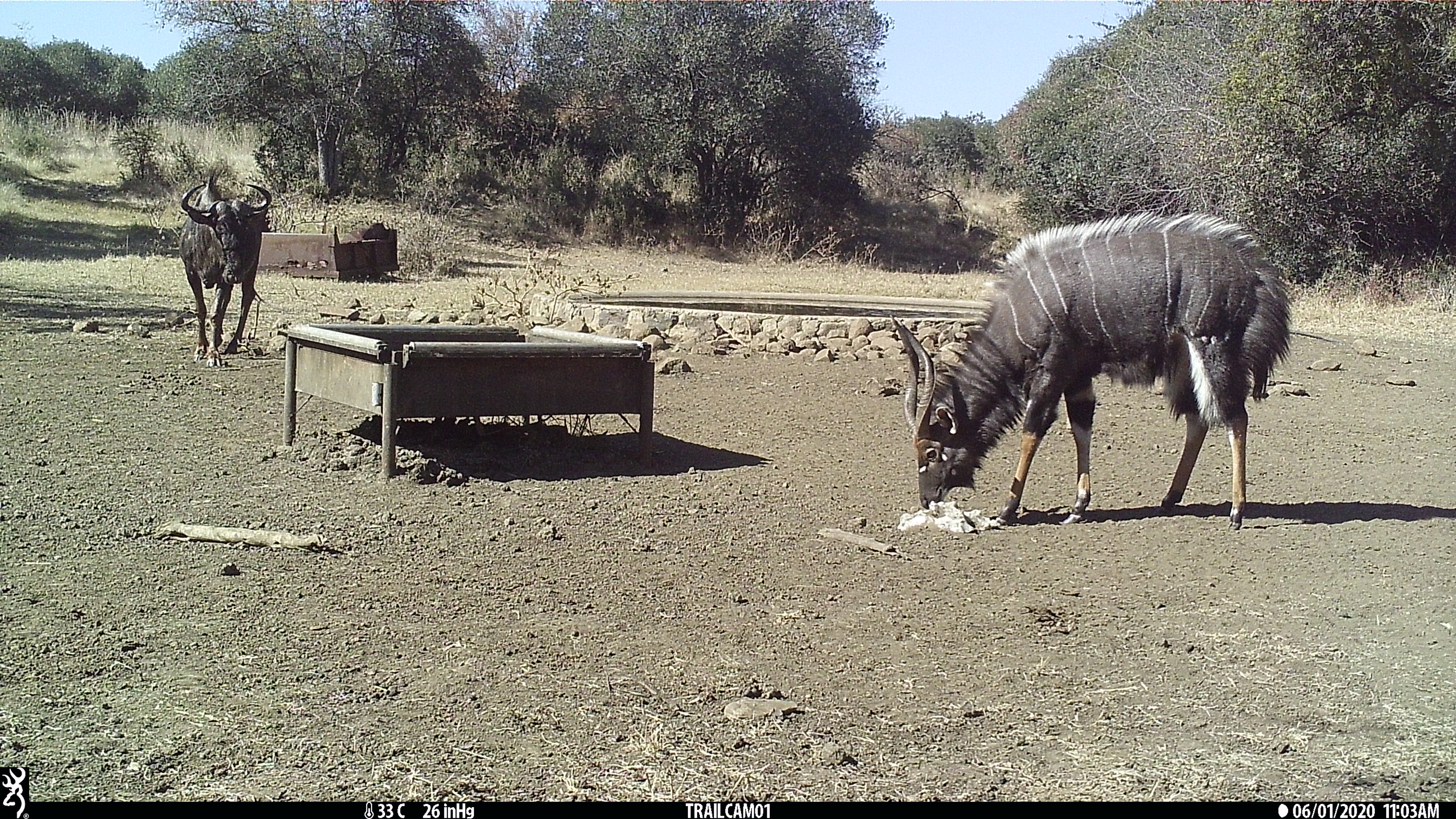 The only good thing about this current situation we are in is that i get to do some hunting myself.

This past weekend i took my family to a new hunting area we wanted to scout and on the list was a Big eland for myself, as i have been looking for a good bull now for the last 4 years.

On the first afternoon we spotted some fresh tracks early on and we got off tracking them in the sand. The wind was not great and we kept on busting them.

On the second morning we looked checked the water holes and found fresh tracks of some big bulls around the water and we were on them. 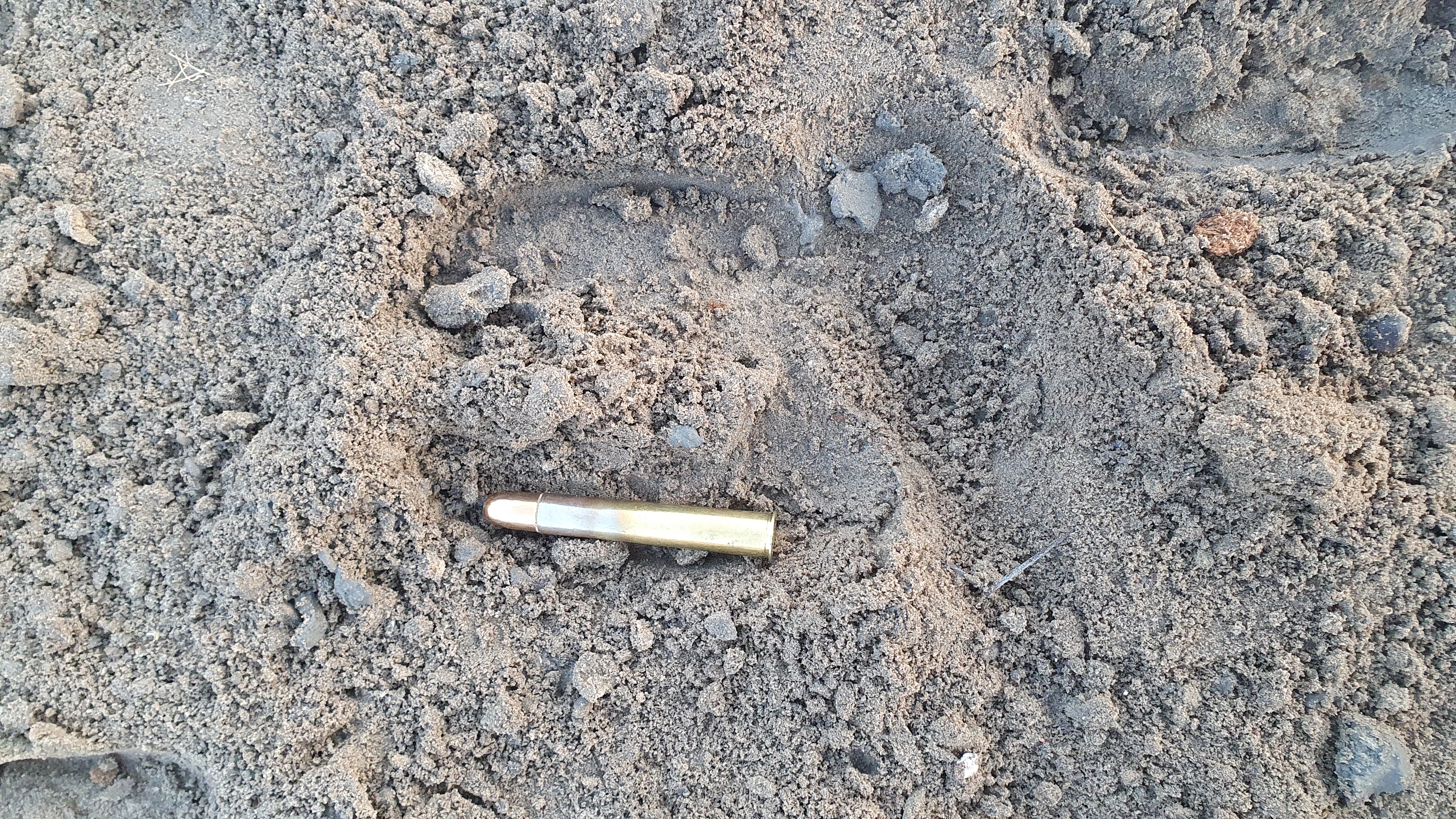 Look how this spoor drawfs a 500NE round

About 2 hrs on their spoor we saw they were going to cross a road up ahead and we jumped to get ahead of them. After about 20 min 5 bulls crossed the road and gave us a chance to look them through the first bull was a tank and i was sold on getting him!!

How ever we could never close the gap on them and by lunch time we decided to leave them and go eat.

That afternoon i took out the whole family as it is a family trip and they all could see the property. Unfortunately we could never pick up fresh tracks again. Just before dark we decided to walk a certain area into a water hole and just as the light faded we busted a big herd of eland with a few bulls in there buy never had a shot. 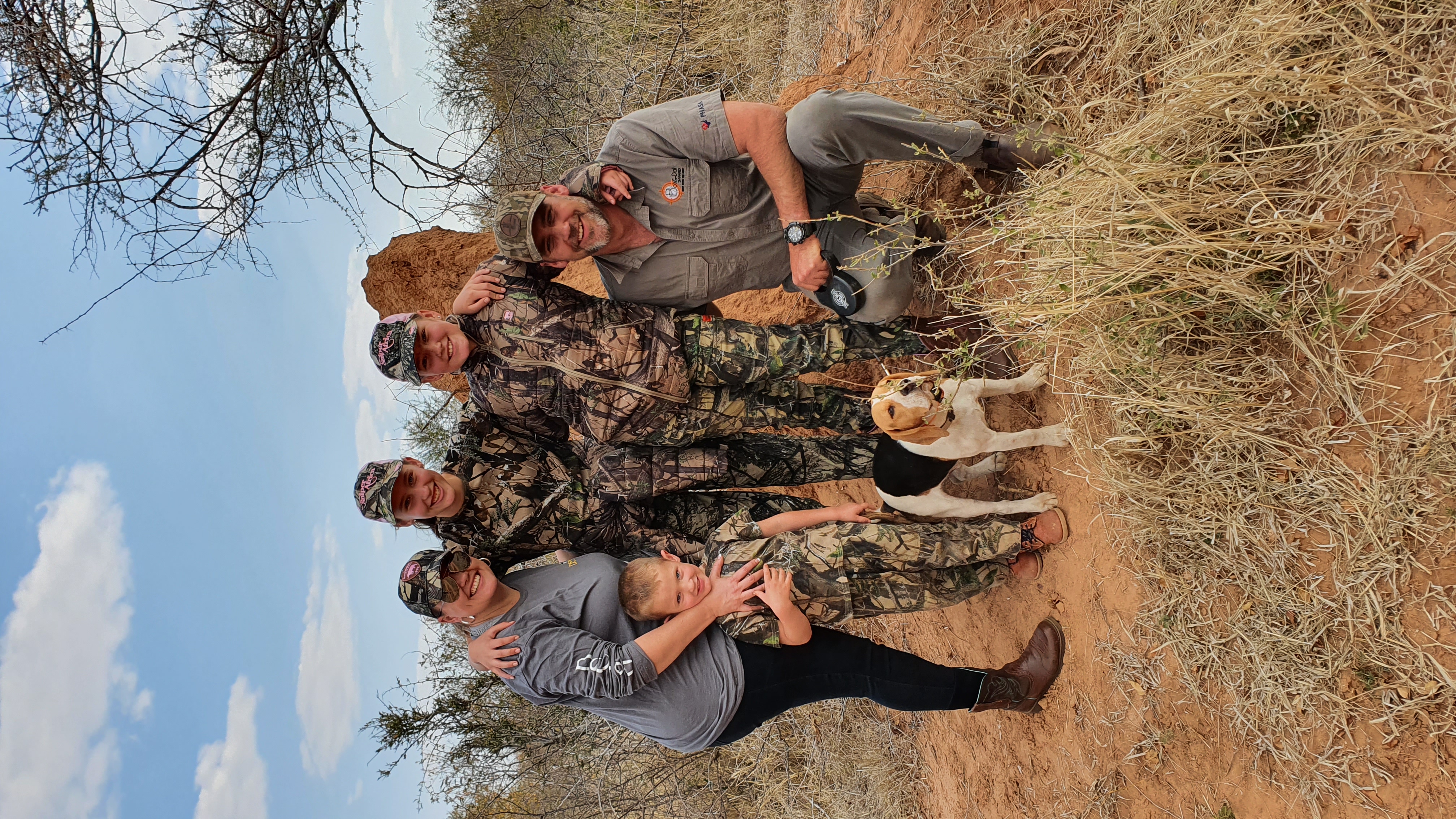 With Saterday being the last full hunting day we were at it early on and was looking for some fresh tracks. We just had a cold front moving in and the wind was pumping. The strategy was to find a big bull and push him untill he make a mistake.
After about 2 hrs we found some fresh tracks of about 7 bulls and decided to see what is in this group.

We did not go far or we spotted them in some thickets and decided to take it easy. We were sitting down with the wind in our faces. The group were grazing but the bush was thick. We started following them sliding on our arses trying to identify what is in the group. After 2.5 hrs we did about a mile like this on our arses and a bull apraoched from our left. First i could only see his head and new if he presented a shot this is my chance.
He walked our right infront of me just 41 yards away and stoped... the problem was his head and shoulders was behind some thick stuff and i only had a stomach shot.
I shuffled to my left to try and open the angle and decided to push the 300gr Swift Aframe bullet through those brush as i could not get a better angle.
Well the 375H&H barked and the bull droped right on the spot!!!
Then it was chaos 6 other eland bulls was running in all directions and did not know where the shot came from!!!

After the dust settled i walked over to my bull and was just extatic with what just happened.
I couldn't have asked for a better hunt than this and the bull is a pretty good one as well 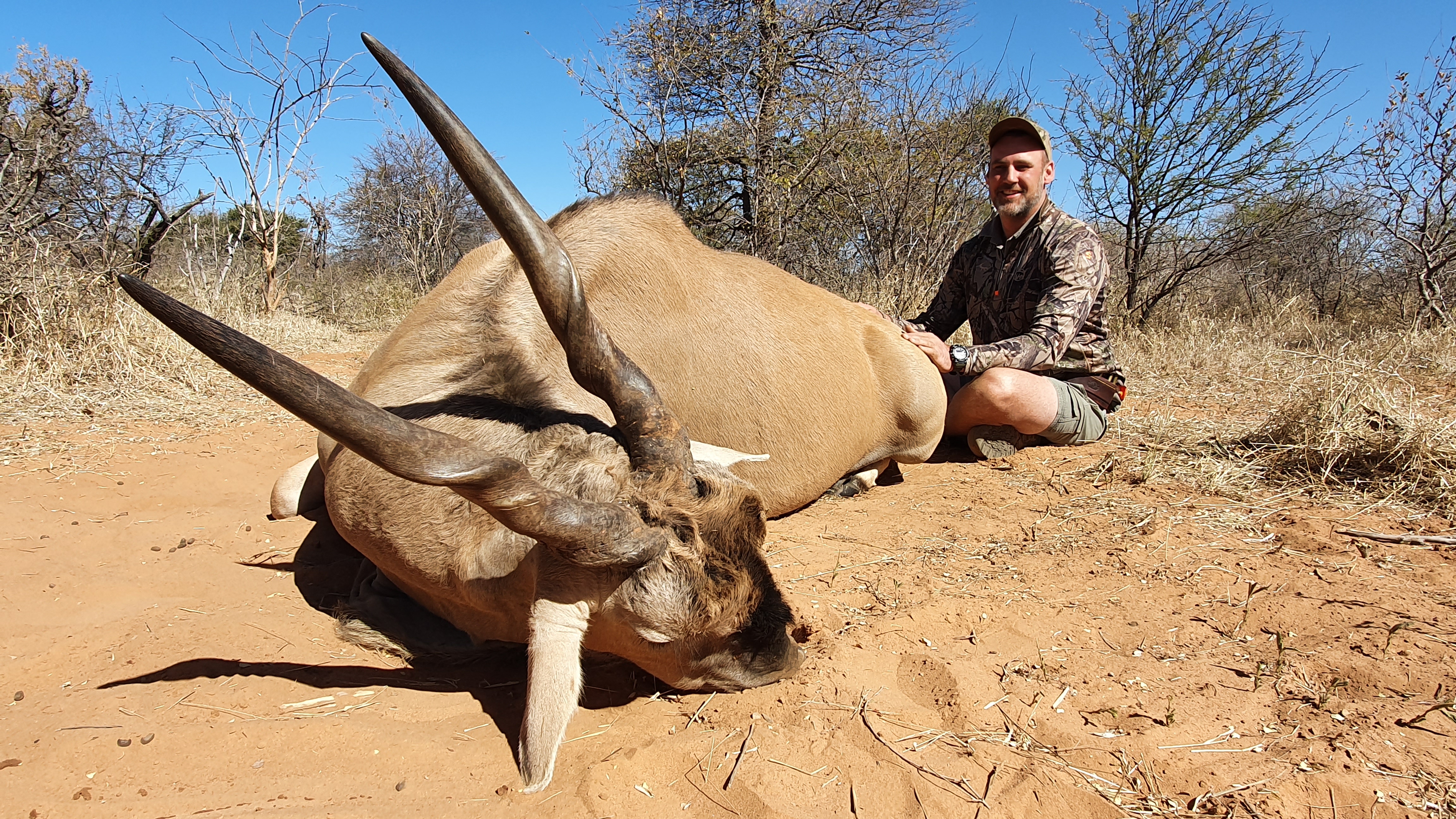 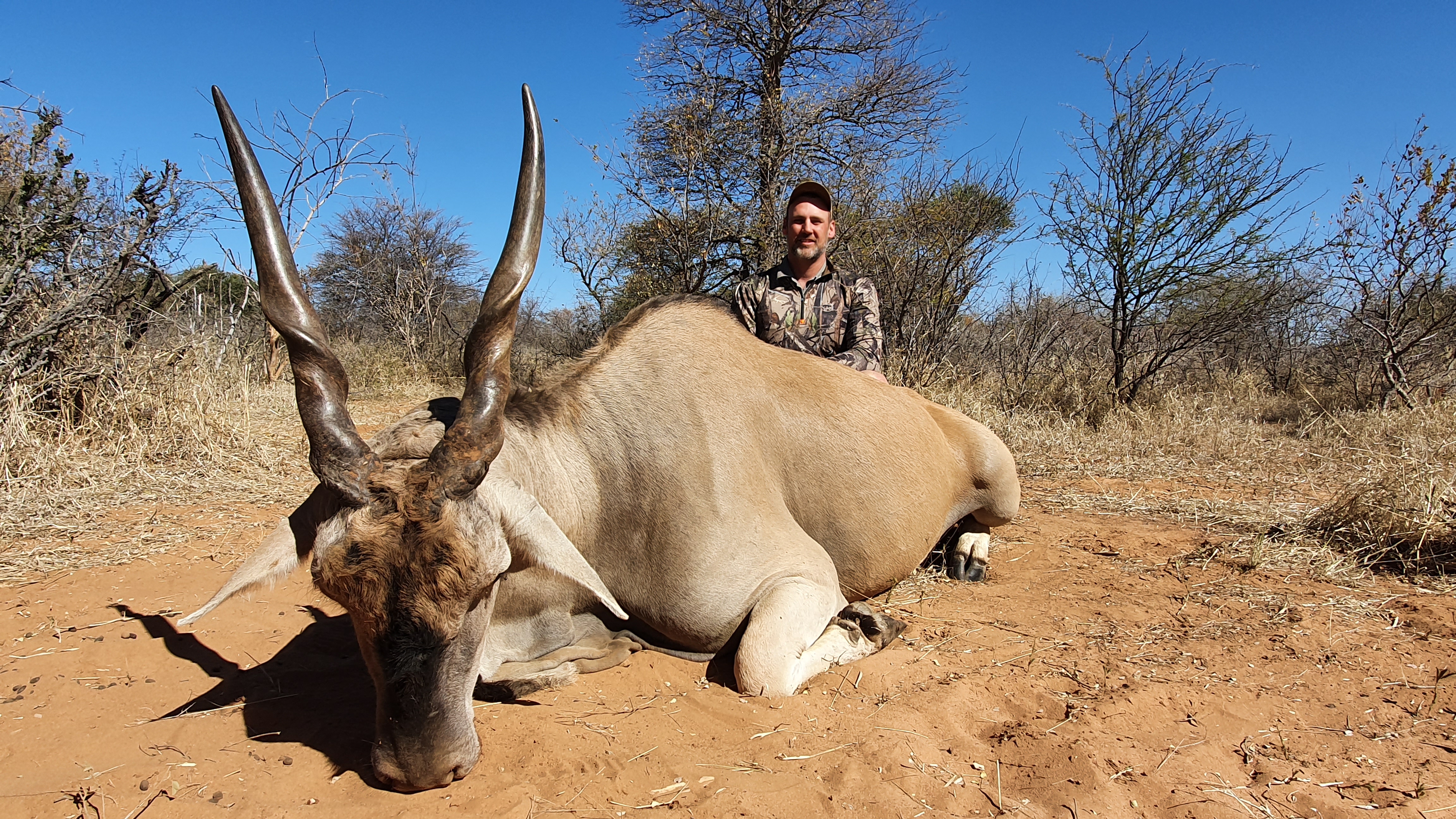 After radioing it in everyone came to look at daddy's success 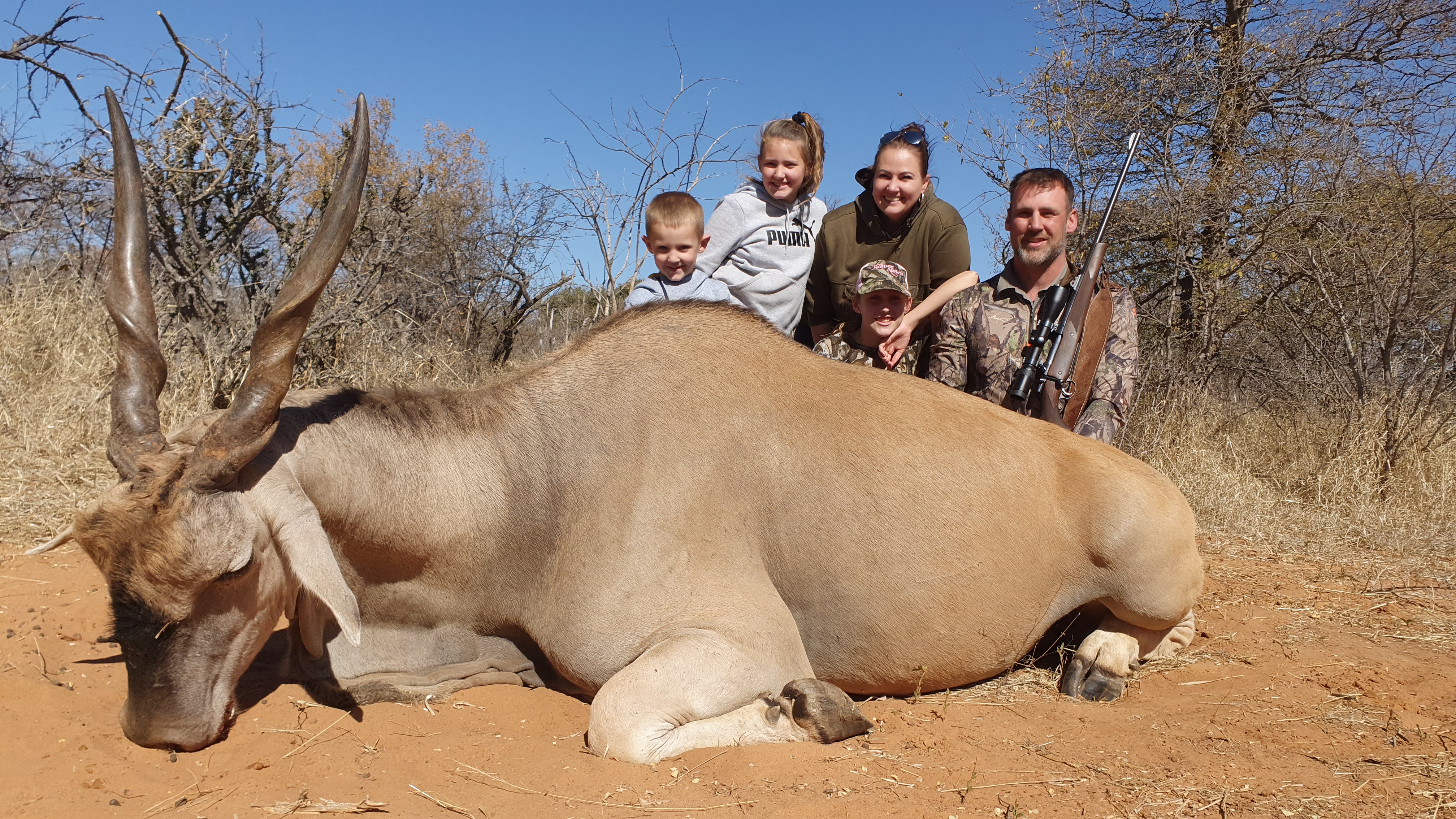 Look at the size of the track!!! 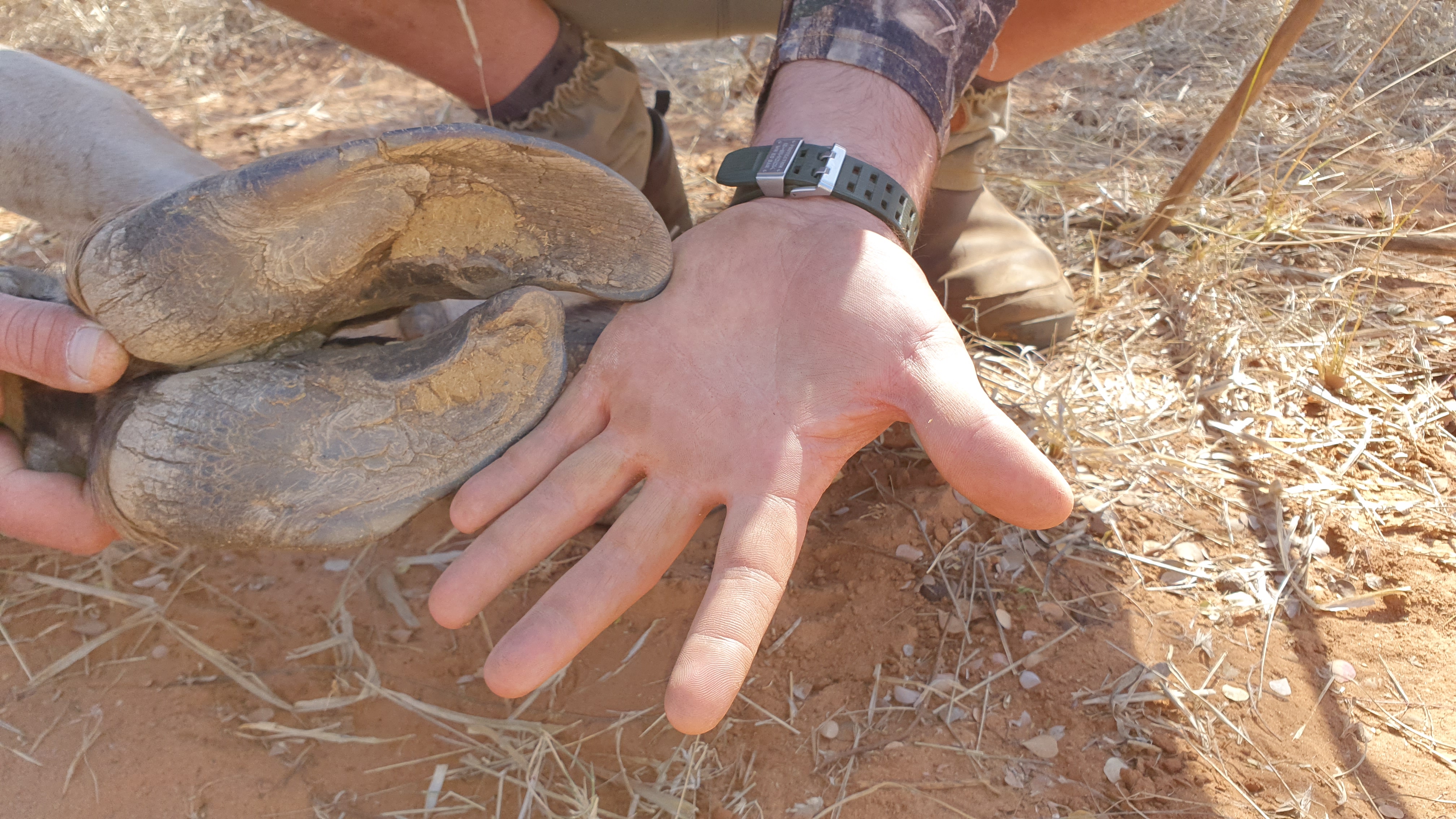 This will be a hunt i will cherrish for ever and sure hope some of our members can experience the same type of experience with me someday!!!

The 300gr Swift bullet did well and that is the reason you bring a premium bullet to Africa!! One cant afford shooting cheap ammo at expensive animals and it just gives you that little confidence when a risk needs to be taken 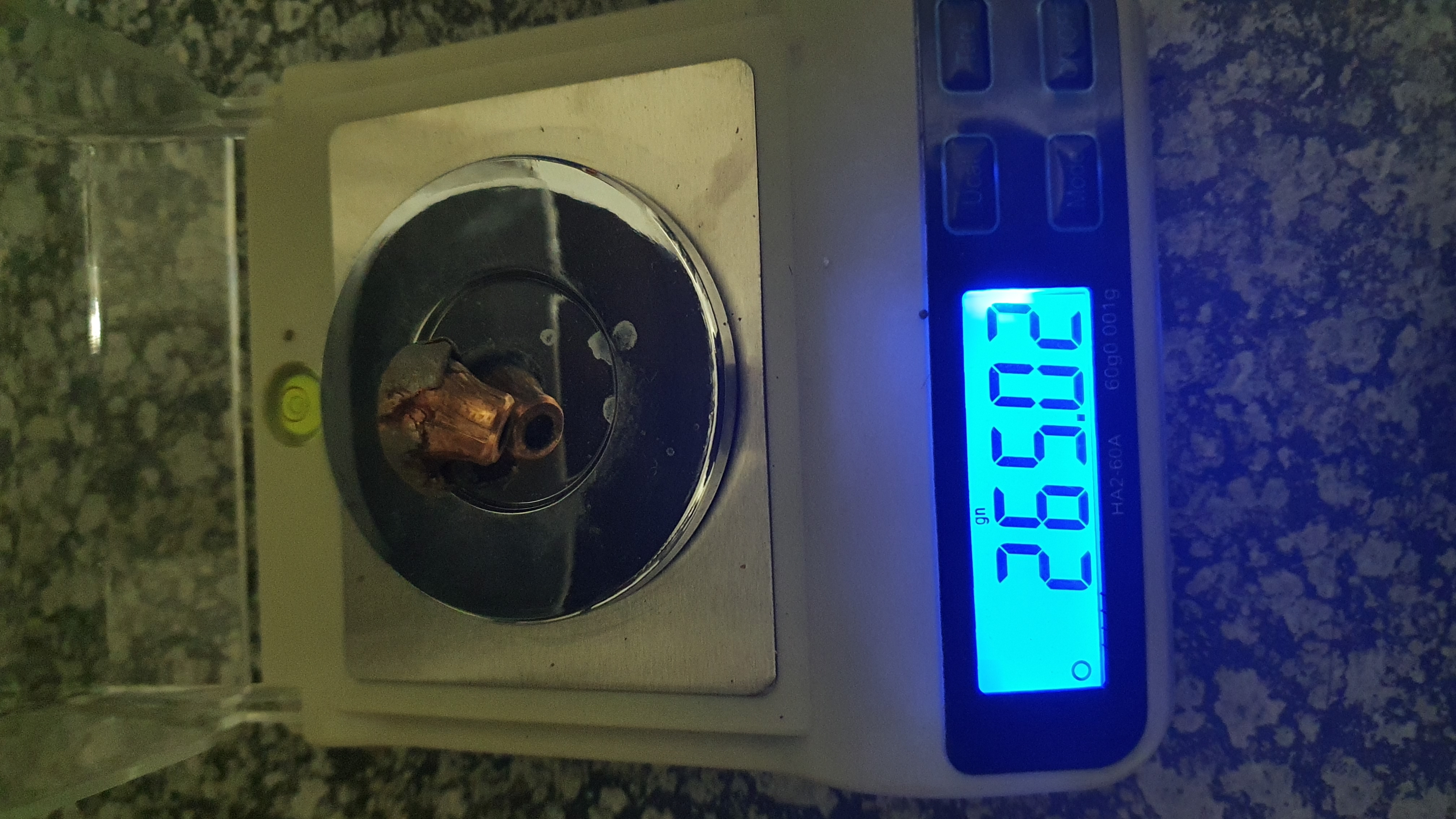 Well done on the Eland. Spending quality time with the family is a reward in itself. Thanks for posting

Congrats on a great bull and a good write up!
Bowhunter addict
S

I enjoyed the hunt report and family pics. Thanks for posting!
GA Hunter 2/2/2019: "....tell your outfitter and PH that a big kudu would mean a lot. Then go enjoy yourself and take what the bush offers."
You must log in or register to reply here.