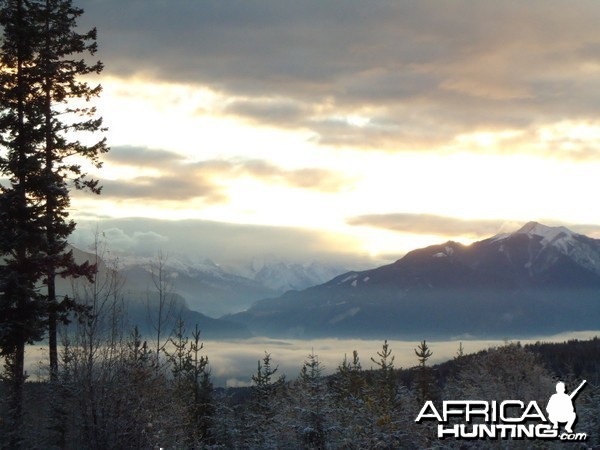 I have very few problem clients because almost all my hunts require a license drawing and most of the hunters playing the draw game are serious, good hunters.

But OMGosh I probably have one of the biggest horror stories to tell ablout a problem client.

I booked a Rocky mountain Bighorn Sheep hunter that drew a lottery tag in 2001 or 2002 and it turned out to be a total nightmare. First, he booked with me and then talked to another guide that told him he could get a 180 class B&C ram in the unit. The other guide said this after he learned the hunter was already booked with me as a way to stir the pot. There had not been a B&C ram killed in the unit in over 10 years and the genetics in the unit just do not produce rams of that size but once in a blue moon. The hunter would call me from time to time and kept asking if I had found any 180+ class rams in my scouting. Each time, I would explain the truth to him that the best we could reasonably expect would be a 170 class ram and that most hunters killed 160 class rams. I was confident I could locate a 170 class ram but not a 180 class ram.

In the contract terms he was supposed to send me the final balance a couple weeks before the hunt as I do not like to carry large sums of money in the field. I called him a week before the hunt because the payment had not arrived. He said he planned to bring the final balance in cash even though the contract stated otherwise. He persuaded me to this so I agreed. Earlier, we agreed that he could come four days early and scout with me immediately prior to the season opener. When he showed up, he did not have the cash and said that he had changed his mind and mailed a check before he left. This guy was starting to make me suspicious from other statements he had made so I checked in with my wife each night by cell phone but the check still had not arrived after the scouting days. All through the scouting days he kept pressuring me about B&C rams.

We hunted the first couple days without relocating any 170+ class rams and my wife still had not received his check in the mail. When I asked him about the check he was very evasive and just said he was sure it would arrive any day. I knew he was a prison guard in Susanville, California and he also told me about a propane delivery business he was in with his mother. He told me he was in a $90K lawsuit with his own mother about the propane business. In a lawsuit with your own mother? NOT A GOOD SIGN in my book. He also told me he had mistakenly received two ram tags in two separate mailings from the Colorado Division of Wildlife. He said he knew it was a clerical error but that he planned to shoot two rams. I informed him that such an act would be illegal even with a clerical error because a hunter is only allowed one ram and then is not allowed to even apply again for 5 years. He said he would just shoot a second ram after our hunt was over and I went home. I said that he had told me about the 2nd tag and that he could get in a lot of trouble if someone found out and I cannot condone such a situation. Besides, all sheep must be checked in with the CDOW and must have a horn plugged with a permanent numbered marker so they can be legally possessed in the U.S.

On day four of the season (day 8 since he arrived) I located a really nice ram that I told him was in the mid 170s. The ram was alone and almost directly below us in a very steep avalanche chute at 150 yards feeding broadside. He said he still wanted a 180+ class ram. I again explained to him that a 180 class ram was not in the cards and that he should shoot this ram. He shot it but before the ram had finished rolling down the mountain, he turned to me and said, "That ram better go mid 170's." I could not believe he had no more respect for me or the animal and would say such a thing before the ram had even stopped rolling down the chute! I bit my tongue for a while but after a few steps down the mountain I turned to him and unloaded on him about his disrespect to the animal he had just killed before we had even walked down to it. I didn't even mention the fact that he had not paid me 50% of the hunt so far and that his expectations were out of line. He somewhat apologized and we took pictures and backpacked the ram off the mountain. He was in good shape and carried about 40% of the ram himself. He carried two boned out quarters while I carried out the other two quarters plus the head and cape.

The next day, we had to check the ram in at a local taxidermy studio and the CDOW Officer came to the studio to check in the ram and plug it. Both the officer and the taxi said over and over again what a big beautiful ram he got and that it was one of the nicest rams to be harvested in a while from the unit. Reluctantly, the hunter became happier with the ram and even handed the extra tag he received by accident to the officer. When we parted ways that evening, he assured me that his final 50% payment would be waiting for me at home. It never came. At this point, you would have thought the story was over but it was not.

My wife's uncle was a prison guard in CA at the infamous San Quentin Prison. I told him about the problems with my sheep hunter. He said that as a law officer, that the prison guard could not legally cheat me like he did when we had a signed contract. He gave me the Warden's phone number at the Susanville Prison. I called the Warden. He was very surprised that this guard was on a sheep hunt because the guard had filed a Worker's Compensation Claim against the prison for being hurt on the job. The guard had not worked for 6 months but was still earning a full paycheck and claiming to be injured!!! The Warden asked me to be available for an 8:00am phone call the next morning with a Workers Comp investigator and I gladly made myself available! They asked me to send them a copy of the contract and pictures of the hunter and the hunter carrying his load of meat. I gladly complied! They asked me if he mentioned during the hunt that he was supposedly partially disabled. He had not and this guy was as healthy as any hunter I had ever guided.

This guy was screwing over anyone he came into contact with! Me, his own mother, and the State of California taxpayers. But he "got his" in the end. I was never paid but he lost his job and had to pay back the State of California.
Last edited by a moderator: Dec 1, 2016
You must log in or register to reply here.

Bowhunting Reedbuck, Diamond in the Rough

What should I look for in a Bushbuck in South Africa?