I have officially caught the hunting bug from my husband and his family. It’s about time I admitted it to myself, after all.

Please allow me to firstly welcome you to this great forum! You are going to get some very good advice from members with tonnes of experience.

Your husband is a blessed man, my wife will not hunt with me at all- she simply has no interest.

To answer your question, I would look at a 7x57. Not that I am bad mouthing any of your pre-selected calibres at all.
Happy hunting!

My best advice would be to try as many different rifles as you can. being of the fairer sex those calibres have the ability to be bloody uncomfortable if the rifle does not fit correctly. I am a small man 5 foot 9. very slight and I shoot a CZ in 30-06 with out any issues. As may have worked out I am a massive fan of CZ, however I did use my friends Sako in 7-08 last year in Africa and loved it.
Good luck, MarkCZ

my wife loves her Savage LadyHunter in 7-08. She is 5'3". The rifle is designed for women who have longer necks on average and a shorter length of pull.
The 7-08 is basically a 270 ballisticly speaking, but with less kick.


btw, I like your avatar. My wife wears an aussie style safari hat and has feathers threaded into her rifle sling.

NurseFet said:
I have officially caught the hunting bug from my husband and his family. It’s about time I admitted it to myself, after all.

Check the Kimber Montana. Mine is in .308 Win. but it's worth a peek. Quite easy to carry and shoot. Good luck on your search

Savage Hunter said:
my wife loves her Savage LadyHunter in 7-08. She is 5'3". The rifle is designed for women who have longer necks on average and a shorter length of pull.
The 7-08 is basically a 270 ballisticly speaking, but with less kick.

btw, I like your avatar. My wife wears an aussie style safari hat and has feathers threaded into her rifle sling.
Click to expand...

Thank you, I too have feathers in my hat but they are the small wing feathers of a Jay bright blue.
Markcz
Last edited by a moderator: Jan 23, 2019

My first question is do you have a single sister???


Now after that is out of the way, I would go down to a local gun store and have them start pulling out rifles for you to check out. For now it doesn't have to be in the caliber that you are looking at but you want to just check the fit of them. A big problem with some is the length of pull or the distance from the trigger to the butt of the rifle. I wouldn't worry too much about this since it can be adjusted by adding or removing spacers.

Then once you have one that fits nicely you can start looking at the calibers. If you are comfortable in shooting a 30-06 I would stick with that but it also opens up a lot of different calibers. A 7mm Rem mags recoil is comparable to the 06's but if you step up to the .300 Win mag it will increase quite a bit just do to the use of heaver bullets.
If you don't care where you are, you are not lost.

Welcome to AH!
I whole heartedly agree with JimP!
Your height, build and pull length are critical to fit.
If you can handle a 30-06, you’re good to go! Wonderful cartridge!

Best of luck finding what works for you!
Africa on my mind.

NurseFet said:
I have officially caught the hunting bug from my husband and his family. It’s about time I admitted it to myself, after all.

Welcome to the addiction. My answer to your question may seem a bit snarky though not really intended to be. I have never once seen anyone ever ask, "What is the best rifle for a man?" It's a silly question, because it's impossible to answer. It presumes all men are built the same and we know they aren't, neither are women. It presumes all men have the same recoil tolerance, they don't, and I doubt women do either.

Consider yourself an individual despite the fact that you share the same gender as roughly half the population. As such you need to try some rifles out for yourself. I bought my wife a Winchester M70 Featherweight in .30-06. A big enough caliber but not too big. A lighter rifle but not too light. She shoots it great. But what's right for her may not be for you.


A few things to consider:

1. A .300WM is a great caliber for PG in Africa. But it is a pretty good kicking rifle, it needs to be a little heavier than a .30-06 to be comfortable to shoot. Do you mind that extra weight when carrying the rifle?

2. Your height and build. This affects what would be the proper length of pull for you. If you're shorter, you tend to need less LOP, and opposite going the other direction.

3. Kind of repeating myself, but there's no perfect rifle for women just as there isn't for men. Handle a bunch of rifles and see what you like.

Not all women are the same.
As some others have said, try some different ones and see what fits and what you like. If length of pull is the only drawback in a particular rifle, that can be fixed. I would leave the work to a pro, though, because I don't have the tools or the practice to be confident of getting it right - unless the rifle is designed with easily removed or added spacers to adjust length.

Welcome to AH NurseFet.
I think the same as Boela.
Good luck and all the best.

Like others have said you physique should play a large part in your decision. One previous post mentioned the Savage Lady Hunter but there is another option to consider. Weatherby makes their Camilla line which uniquely tailored for women as well. It is also available in 30-06. You would be doing yourself a disservice by not trying one or both of these rifles on for size. Due to the relatively small volume of rifles being sold in this configuration be prepared to spend a little more than what a "man's" rifle would cost. You may also have to spend some time finding a gun shop / store that has one in stock. When you find one some travel might be involved. Good luck, keep us posted. BTW welcome to AH.
B

Welcome to AH. May I suggest the Ruger model M77 in a 308. Great all around deer and plains game rifle.
Here is mine with the 16 inch barrel. 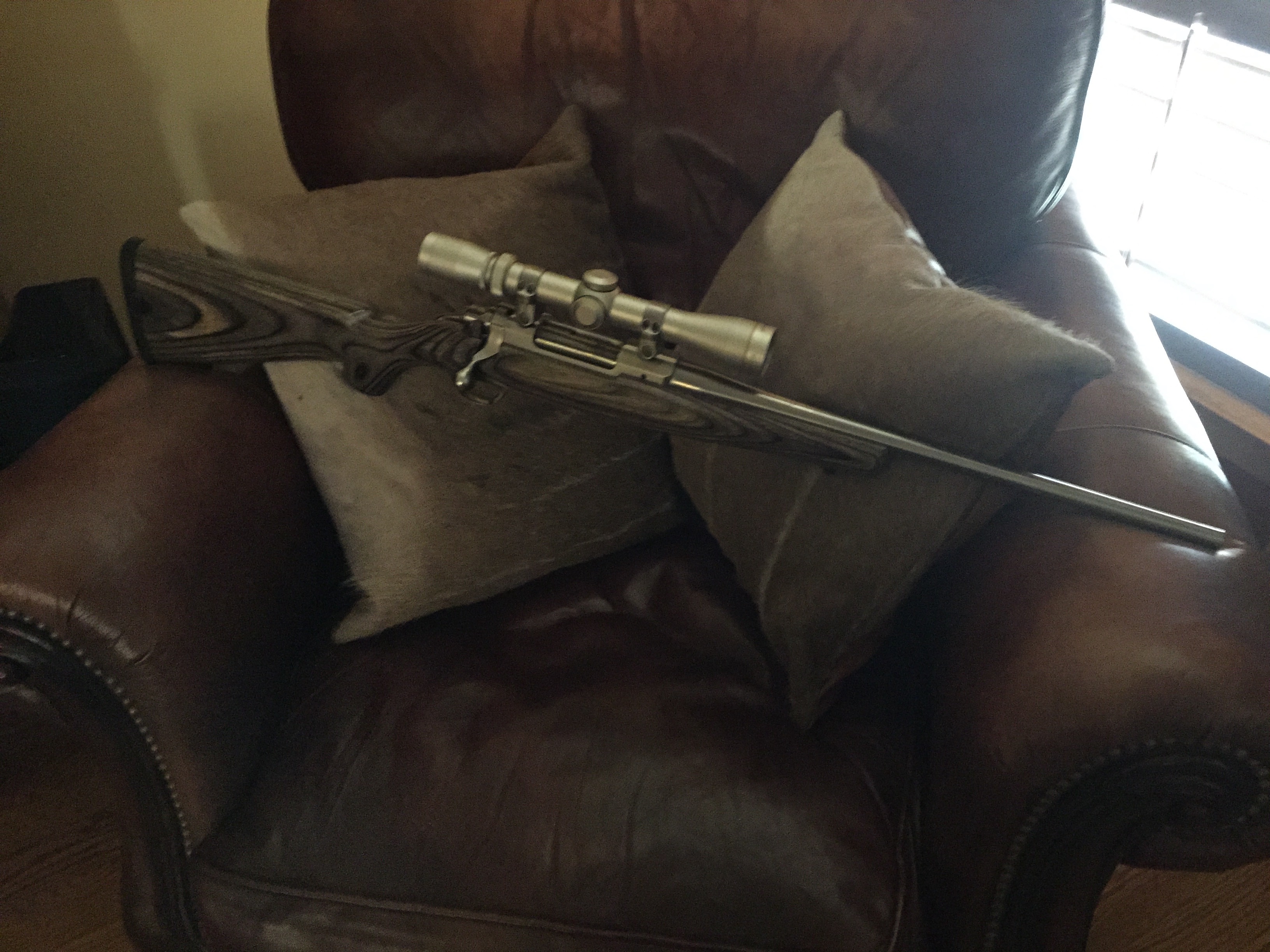 While the 30-06 is a perfect caliber for just about anything, you might pick a different caliber. Many African countries have a silly rule about not importing two rifles of the small caliber. So if you and your husband booked a hunt to South Africa, you'd likely put two rifles in one gun case and the rifle permits would be in one persons name. The rifles would need to be different calibers. You could put them in two different gun case and have one rifle in each persons name. If you went this route, there is the benefit of common ammo. I think caliber options to consider are 270, 7x57, 7mm-08, 308 and 30-06.

As far as model and make, as others have said, that depends a lot on your size. Also, what is the make and model of your husband's 30-06? If you like it, tell your husband to buy a new rifle for himself (this is a sign of true love).

If you are petite, something like a Remington Model Seven, which is a smaller version of the Model 700, is worth considering and not too expensive. https://www.remington.com/rifles/bolt-action/model-seven/model-seven-cdl

I started my wife with my 7x57. She liked it so much she declared it ‘hers’. She shoots it incredibly well. That cartridge, loaded with 175 gr Swift A-Frames is deadly on African plains game. I load it with 145 gr Speed SPBT’s for NA deer.

She has now decided to hunt Cape buffalo. I have bought her a 9.3x62 for that hunt. Again, a cartridge that punches way over its weight.

My wife and I love hunting together. Your husband is lucky to have you getting into the game with him. Good luck and straight shots!

I’m sure her husband will appreciate the suggestion of a Rigby as an entry level rifle! LOL, you have excellent taste FWB!!!
V

I have made custom weapons for people of all sizes, ages, both men and women and even a few I wasn't right certain what they were. And one thing is for sure is that I have never been able to say that anyone of them was a "fit" for anyone rifle or caliber.

Yea! You may think you hit the nail on the head and have a "lock", but .find out that you were all wrong.

If you are not going custom them plan on spending time at a big gunstore checking out the offerings.