Headed back to Africa in 2015 and was wondering what might be the best overall lion rifle?
Shoot cape buffalo in June 2013 with Thwane Safaris with a 375 Jarrett.

OR are you looking for a reason to purchase a new rifle? Then look for a 416 Rigby.

No such thing sorry to disappoint, 416 is awesome though but the 378wby has proven itself to be great for lion well, so has the 416rem , the 375h&h as well as the ruger, so the 404 Jeffrey your Jarret would work great as well as

Seriously though pick the one you like good hydrostatic shock matched with wound channel is any cats down fall.

Find a rapidly expanding soft such as a nosler, or any of the hornady softs..... DO not go with the Barnes on this one......

Or aaaaaaahhhhhhhhhh well I'll just go with Mr. Grage i kinda like he's way of thought on this one

Never hunted Lion before but all the calibers listed will work just fine according to what I've read. I am wondering why not the Barnes though they've worked perfect on any game I have taken with them and believe me thats a lot of game.
Enjoy Life Now! It has an Expiration Date.

Bob i find them a little hard if you will, and they do not create the excessive and large wound channel i have experienced with softs such as Hornady and Nosler.

On heavier boned and thicker skinned animals the Barnes would be my preference but they under perform on cats from experiences i and some others have had...
While an okay or marginal wound channel might be acceptable on A kudu or eland I would personally prefer as always a round that is best suited for the task.

If you want to do the hunt with a classic then I would go with a scoped 425Westley Richards.
This Calibre worked well on my second Lion; 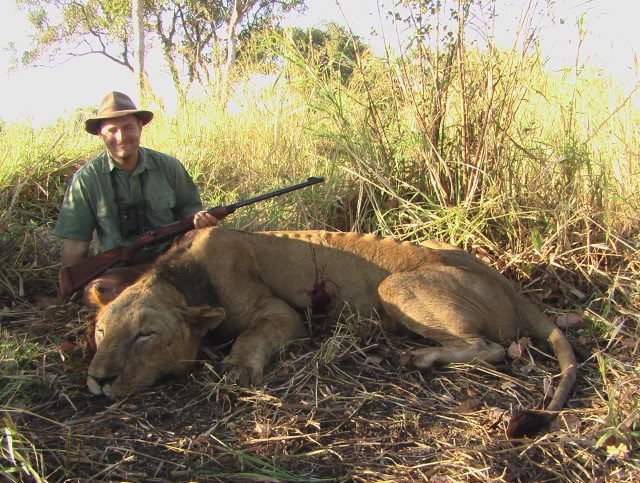 A 375 whether H&H,Ruger or whatever is perfect for lion.Agreed a classic would be a 425 or a 404.Softs such as Hornady will work perfect.I found the local PMP bullets which are quite soft to work perfect on lion with a 375H&H.
D

I have used my .375 H/H and hand-loaded 250gr Sierra Gamekings with outstanding results. Federal's 270gr Power-Shok is also very effective on cats. Both types of bullet resulted in clean, one shot kills. Shot placement is, of course, extremely important.

Shot placement & correct bullet design are considerably more important than calibre but .375 will do the job as well as most of the other choices.

David, I can't help you about lion rifle because I haven't experience on this specie, sorry.

Please, can you give me more information about your buffalo hunt on Thwane Safaris and Barnard family ? I have interest for this lodge. Thank you.
H

Couldn't have said it better Shakari. Picking the right bullet and putting it in the right spot is the major factor here. A quick expanding soft in that .375 will do just fine unless you are looking for an excuse to purchase a new gun.

David , Lions are soft skinned animals and when hit correctly they don't take a lot of killing. Your .375 will do just fine. I have seen plenty of Lion killed with 30 06's , so you wont be under gunned. Above posts have some sound advise on bullet choices.

David, I can't help you about lion rifle because I haven't experience on this specie, sorry.

Please, can you give me more information about your buffalo hunt on Thwane Safaris and Barnard family ? I have interest for this lodge. Thank you.
Click to expand...

Had a great 10 day hunt. Buffalo hunt was a once in a life time hunt. I took 6 animals and my wife took 10. Can't imagine meeting a nicer family. We will return with them in 2015.

I used a Remington 700 375 H&H with a 1 x 4 leopold lighted scope with removable mounts and Swift a Frame bullets. Worked great to take my lion in 2012, one shot and down so like all have said shot placement is the most important thing as finding a aiming point when the Lion is in a thicket is the hard part while he is roaring at me. Practice a lot on sticks helps as well, for this Fla boy them things are like snow ski's.

With lion shot placement is the key most any bullets except solids will work just great but the moment is big and trying to stay calm and concentrate on the shot makes things much easier for everybody.
G

I've never hunted lion, and for what it costs to shoot one I probably never will. I know the .375 H & H Mag. has long been regarded as the quintessential lion cartridge. It's been around for about a century and has certainly proved itself. Further, it's the only cartridge to which J. H. Taylor devoted an entire chapter in his classic African Hunting Rifles and Cartridges, calling it the best all around African round.

Of course, when dealing with animals that bite back it's probably better to be over-gunned than under-gunned. I will, however, say that I have a Sako chambered in this round and find it a pleasure to shoot, even with hot loads pushing heavy bullets, and I'm no tough guy by any means. Anything much heavier hurts and might make me flinch. For my part I'd rather not get so stunned by the first shot that I'm late on a second shot if one is needed. That's why I think I'd go with my .375 if I ever gun for lion, which I almost certainly never will.
I

David K said:
Headed back to Africa in 2015 and was wondering what might be the best overall lion rifle?
Shoot cape buffalo in June 2013 with Thwane Safaris with a 375 Jarrett.
Click to expand...

That rifle will be fine!
B

Bobpuckett said:
Never hunted Lion before but all the calibers listed will work just fine according to what I've read. I am wondering why not the Barnes though they've worked perfect on any game I have taken with them and believe me thats a lot of game.
Click to expand...

My two cents for what it's worth, which is probably not much...

The barnes TSX is THE perfect bullet for thick skinned game like buffalo/hippo. I've dispatched two buffalo, and a hippo with a total of three shots using these bullets. (it took me five shots to kill a damn gemsbok, so don't go thinking I'm an excellent marksmen) Both buffalo were full frontal chest/lung shots, and both bullets ended up in the rumen and expanded perfectly. The second buffalo was take at 110 yards, lucky shot, with a .450 rigby - I get little bit dumber every time I shoot that gun. The hippo was at relatively short range, but my aim was a bit low. The bullet ended up passing through a good 1-2" of water, the back of the hippos skull, and finally the front of the hippos skull. These bullets provide maximum penetration, and controlled expansions. Unfortunately they do not perform nearly as well on thin skinned game.


I have had much better luck on thin skinned game with bullets of lighter construction, in particular the Woodleigh 8mm PP SN's. When deployed on plaines game they hold together, expand quickly, and leave a path of destruction in their wake.
You must log in or register to reply here.