Am planning an African plains game safari for this summer. What do people recommend for the best bullets to use in a 7mm-08 caliber rifle? Nosler 140 AB, Hornady 139 GMX? Barnes TTSX 120 gr?

If I was taking a 7mm-08 to Africa I would look at the 140 gr TTSX. Their on-line info shows 4-5 powders that will get this bullet over 2900 FPS. That will do a great job on most of the plains game animals. Under rated caliber. Light recoil and easy to shoot. When/where you going? What animals on your list. Good luck. By the way welcome to AH. Bruce

Good luck on your hunt. Either load should be fine.
D

gillettehunter said:
If I was taking a 7mm-08 to Africa I would look at the 140 gr TTSX. Their on-line info shows 4-5 powders that will get this bullet over 2900 FPS. That will do a great job on most of the plains game animals. Under rated caliber. Light recoil and easy to shoot. When/where you going? What animals on your list. Good luck. By the way welcome to AH. Bruce
Click to expand...

South Africa: Eastern cape. July. Barnes no longer makes the 140 TTSX but rather the 120gr. I don't handload yet so 140 not easy to procure.
Superior Ammo makes 145 LRX but quite expensive. Animals: Kudu, Gemsbok, Impala, Blesbok, plus ?? Thanks for your welcome.

If your rifle shoots it well use the 139 grain GMX superformance load.
Micah 6:8 - Seek Justice, Love Mercy, Walk Humbly with your God
D

Art Lambart II said:
If your rifle shoots it well use the 139 grain GMX superformance load.
Click to expand...

Best 3 shot group from benchrest at 100 yards: 1/4 inch. That was a good day. You would choose the GMX over the Accubond?
Thanks for your response.

Nothing against the NAB but I would take the GMX over it. I bought a 7mm-08 this year and if I wasn't handloading TTSX, that would be first choice and NAB would be second.

The GMX intrigues me for a number of reasons: I used the 150 gr 3006 superformance on a boar hunt and it was very decisive. Also, when I see pictures of them they seem to expand into a cup shape mushroom. I have read a lot recently about the effectiveness of that cup shape on creating a good wound channel, so my thought is that it should be a good bullet. Finally, as a gilding metal bullet my thought is it should not foul the barrel any more than a typical bullet.

Having said all of that I like Woodleigh's. There is something about monometal that I have not gotten comfortable with. My boar was dead where I shot it but it was hard to find an exit wound. The bonded lead core made a reasonable exit wounds. So I think "Hmmmm". A control trial of one is not worth anything but it is a matter of the subconscious confidence I need when pointing my rifle.

I would use the GMX over the accubond because it will hold more weight and that may bring the most out of this caliber for a heavy animal.

Good luck!
"When my friends tell me that I have led a remarkable life, I have to admit having done my best to make it so" - John Kingsley-Heath

I used the GMX in 7mm mag and didn't like them much. Better than A LOT of bullets out there, but performance seemed inconsistant. Only shoot the .375 H&H now and love Peregrine bullets in that. Best bullets I have personally used.
“I never knew of a Morning in Africa when I woke up and was not happy.”
— Ernest Hemingway

I use 100 grain ttsx out of my weatherby 257 and have no animals go more then 40 yds. Cape kudu my son took with that combo never took a step. I think it is hard to beat the ttsx if your gun likes them.

partial to barnes and hornady - but you can't go wrong with nosler either. any of them should perform well for pg.
John 3:16

First off, welcome to the best forum in the world (no matter what category anyone would care to name, this one is best).

Anyway, the wife of one of my friends has a scoped Kimber 7mm-08 and I have watched her bag the living daylights out of African game, including gemsbok by means of 160 grain bonded soft nose bullets, hand loaded to "middle of the road" velocity.
She is formidable with that particular rifle and specific load and so it would be difficult to argue against her multiple successes.
That being said, as long as heavy for caliber Swift A-Frames were accurate in my individual rifle, such would be my bullet of preference, in 7mm.

Not sure if the magazine on your rifle will be long enough to accept the 175 grain A-Frame bullet or not, without pushing it so far down into your powder space so as to reduce velocity too much.
But if the magazine is long enough then, either their 160 or 175 gr would be my preference for Africa, over any other bullet I have seen so far, if bringing a 7mm caliber rifle on safari.

PS:
Just now read post indicating you will hunt the Eastern Cape of South Africa.
So, forget what I said about the 175 grainers and instead use either 150 or 160 gr A-Frame.
Last edited: Mar 13, 2017

Without a doubt, 175gr Nosler Partitions are going to be the most effective and lethal bullet available for your rifle IMHO.


If you don't want to handload, call Lonnie at Superior Ammunition and he'll make you the 7mm08 loads with 175gr Nosler Partitions.

If you want a plan B, buy the Norma 156gr Oryx here https://www.grafs.com/retail/catalog/product/productId/25192 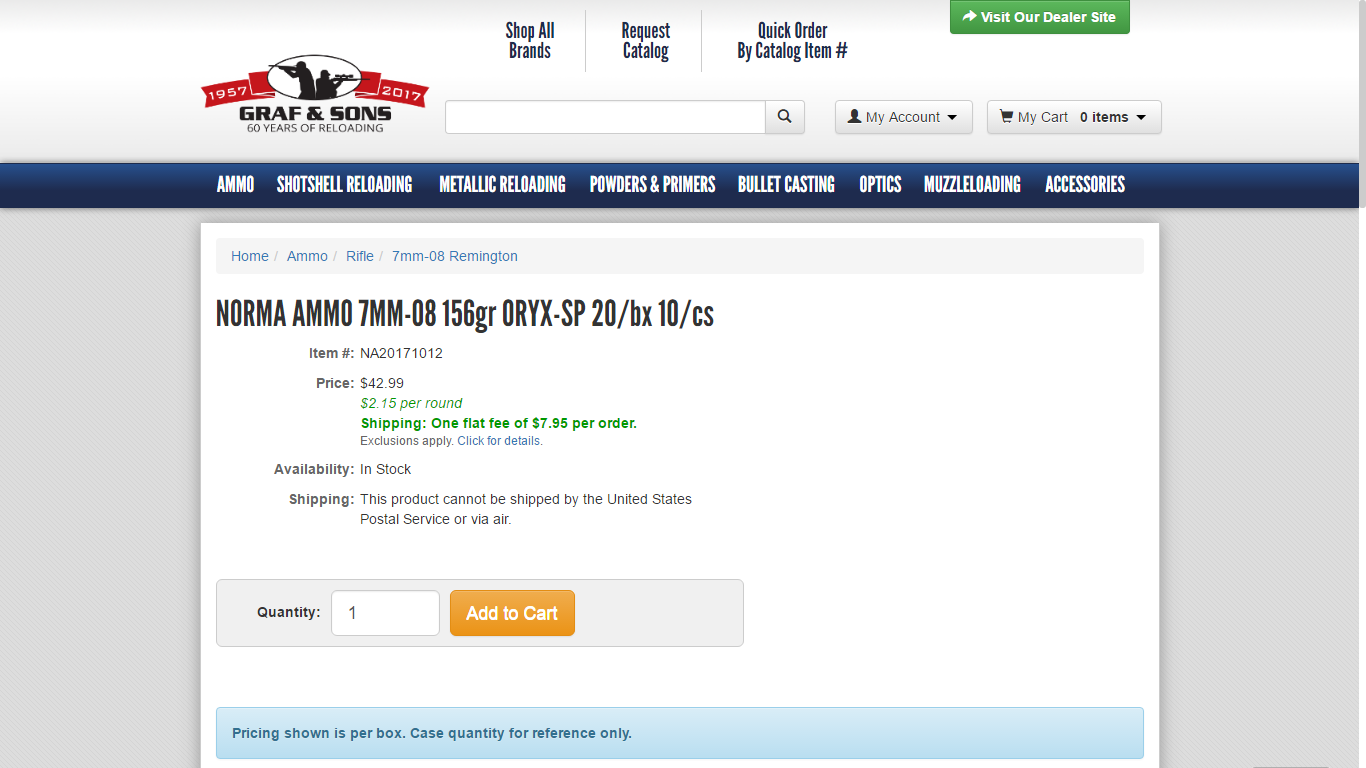 Midway has the 140g TTSX on sale right now for a pretty good price.

7mm-08 is not a round I happen to use, but if your rifle shoots the TTSX accurately enough to hit what you are aiming at, it will certainly do the job.
D

Shot placement is most important to consider

My son took a 7-08 over last year had great success with 160 grain Accubonds. I used 160 grain Longrange Accubonds in my 275 Rigby no problem at all.

My daughter and I had 8 one shot kills with Hornady SST from a 7mm mag. These were kudu, nyala, impala, blesbok and zebra. I've use the SST in my 270 as well to take a dall sheep in the Yukon, another one shot kill.

A-Frames I like too. The SST typically don't exit the animal, while the A-Frames do.

To get more responses, you might ask folks that shoot 7x57, which is pretty much ballistically equivalent to the 7mm-08.
S

Accuracy being similar, use the 120 gr TTSX. No real reason to consider anything else if the accuracy is good.
R

i have shot alot of critters with a 7mm08 and i have never had to shoot anything more than once. for plains game including zebra and eland
i would go with hornady or the oryx load mentioned above. both are very good if they shoot good groups out of your gun. bullet placement is the most important
part.
You must log in or register to reply here.

V
What caliber should I bring for Plains game hunt