Back from SA, hunted with KMG-Hunting-Safaris

Ok, Ladies and Gents, I want to share the story of my and my friendï½´s latest hunt with KMG-Hunting-Safaris, owned by forum member Marius Goosen.
The plan was to go for Lioness first in Kalahari region, than go way south to Eastern Cape, KMGï½´s main region to hunt plainsgame.
So we arrived on monday 15th and were picked up by a nice woman, paperwork for rifle was done by a lady from PHASA, and it went perfectly and quick.
The 7 hours travel near to the Botswana border was boring and after our flight from Frankfurt to Johannesburg we slept most of the time.
Late afternoon arrived, a very kind welcome and a fine dinner finished that day.
After a good rest we started hunting on second day. On a place with more than 12000 ha is much ground to cover. But it took only a few hours when we found tracks of one male and in another place of 2 animals, one lioness and a young male or another lioness. After a few instructions of our PHs we startet walking and stalking with the two tracks in front of us. It tooks a long while till one of the trackers found a lioness laying in the shadow of a tree, still relaxed (in comparison to us ). We slowed down the walk, bended down, meter by meter we got closer and closer. At around 20 meters the PH opened the sticks, my friend Ingo aimed and hit her exactly where the PH wanted him to hit. A second shot was done just to be sure, but not really needed. It was so much fantastic to see that beauty of a lioness. All of us were so happy and we started making pictures and stuff.
While that happened we took our guns at the next tree, but only a few seconds later the trackers pleased us to hold the guns, because there was still another lion around us.
And indeed, the tracker who was standing on top of the truck while we were celebrating, found the second cat around 300 meters away, also laying but flat laying ears, tail moving, so as they told us very unhappy and full of adrenalin.
We circled her meter by meter, and believe it or not, we got close! Less than 10 meters between us and I still couldnï½´t see her! I was ready for what would come, so the tracker threw a plastic bottle in her direction. The bottle hasnï½´t touched the ground yet when the lioness jumped out of the bush, through the air, with unbelievable noise making. It tooks me less than 3 seconds to send 3 bullets on the way, so the lioness was busy with herself, I managed to load my gun very quick and shot 3 more times. Than it was quiet.

Wow, that was so much exciting, fast and no time to concentrate. But now, after that, I totally got soft knees.
So the first part of our hunt was done.

On one of the following days we drove way south to Eastern Cape with our PH Louw Pieterse and his wife, a long long 11 hours drive.
We arrived at Huntshoek Lodge, one of the main lodges of KMG-Hunting-Safaris where we had a fine dinner and time to relaxe.
Within the next days Ingo shot a very good Nyala and a fine Bushbuck, both with 300.win.mag. Unfortunately the weather wasnï½´t that good as we hoped, rain, rain and more rain. But we used all chances to go out and hunt.

I was lucky enough to get a nice Vaal Rhebok on the second last day. Damn, those things are wild. We went to another place, which is probably one of the best Vaal Rhebok places in EC. Nearly no trees or bushes, only gras and cactus. The thing is: you go out an walk for while, than scout the landscape, the mountains for animals. And if you are lucky enough to find them, theyï½´ve already seen you and run, run, hundreds of meters and donï½´t stop. So the plan is to surprise them, use all of hide possibilities, crawl if needed, be sure about wind, sun and so on.

After a while we found a small group of 1 ram and 4 females. We made a big big way around them to get into the right position, behind hill lines. Walked, stalked and crawled, until I got into a small bush with a rock in front of me. At 240 meters I took a shot and only 4 females disapeared. No more male to see, I got him.
During the days I also got an old Black Springbuck and Blessbuck, also very good hunts.

I have to say, Marius and his stuff did very very well. There was nothing I missed (exepct more sunshine ), Louw and Marius are PHs, but more they are hunters, personally, like hunting for themselves.

Finally I have to excuse if my english is not perfect, but I think I managed to give sense.
(And I just saw that I could have placed that post in a better category of reports, sorry, donï½´t know how to change.) 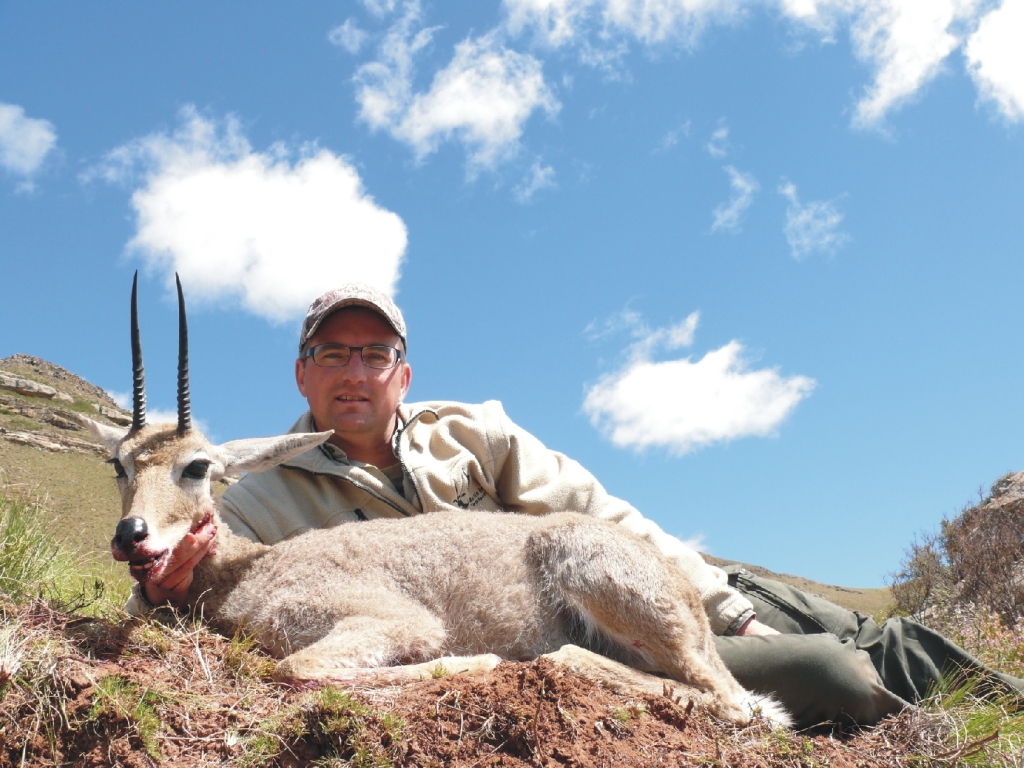 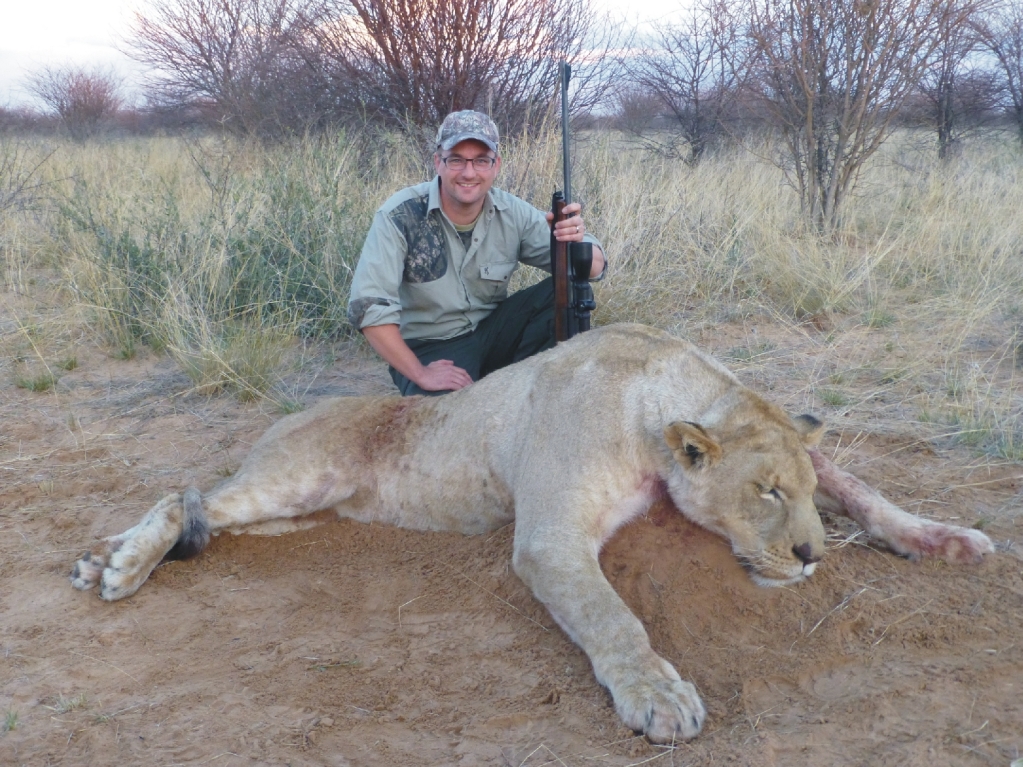 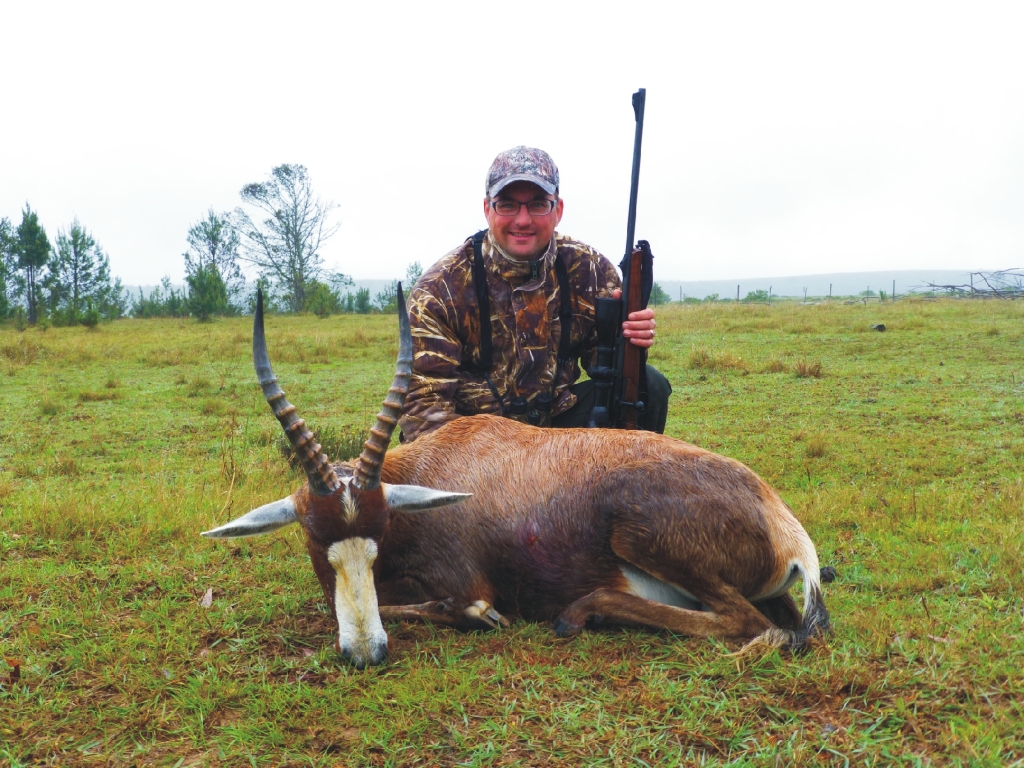 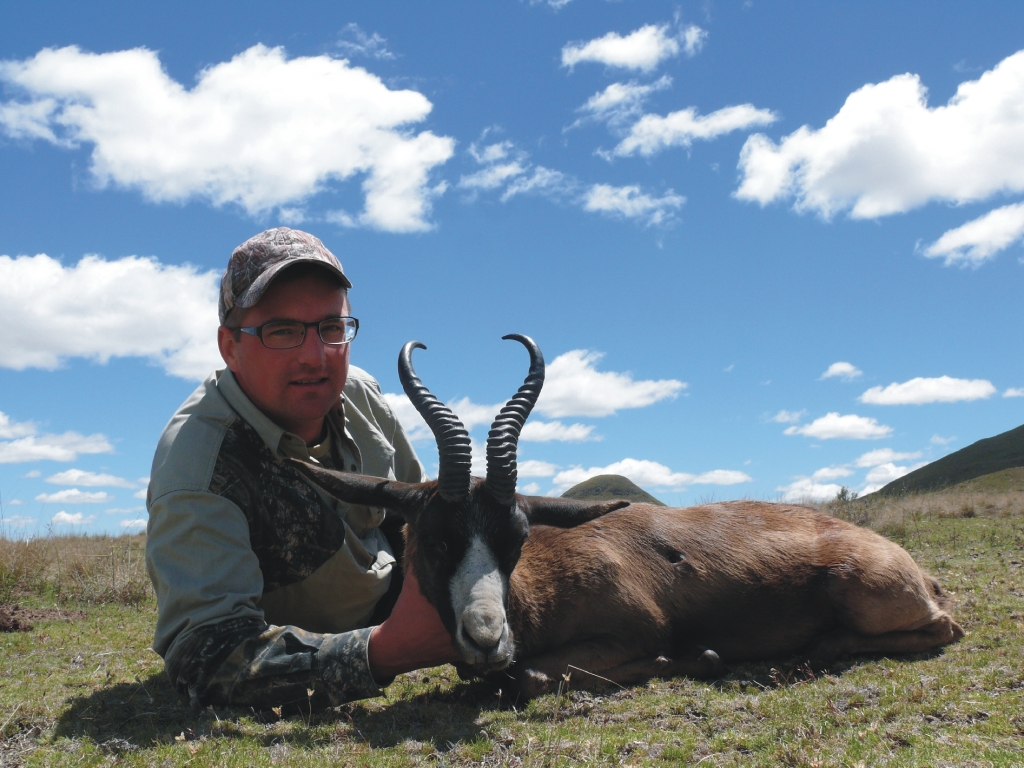 Martin, Great Rhebuck!
Thanks for posting your report.
At least there was a little blue sky in your pictures.

Your english is better than my German.

Congratulations Martin! Thanks for posting your hunt report and trophies.
Jerome Philippe, Founder of AfricaHunting.com

Congratulations Martin Thanks for posting your report and pics of your fine trophies Great Job.
Enjoy Life Now! It has an Expiration Date.

even with the rain you had a smile on your face...

Congrats Martin, It seems like you had a great time and took very nice trophies. Lion hunting is very exciting, and that Vaal Rhebok is outstanding !

Great Pictures. And great story. Thanks for sharing.
-WS
T

Martin, congrats, thanks for sharing looks like you had a great time.

congratulations martin ,never a bad word about KGM thats a great track record ,and you got some excellent trophies and made a great effort to show them off in the photos
thamks for the report mate
your english made great sense
THE HUNTER; The person that pays over 90% of the cost for the presavation and maintance of wildlife and gets zero credit for it ................

Excellent trophies! Congratulations and thank you for the hunt report.

Thanks for the hunting report! Love your vaal rhebok!

Thanks for posting the report, Martin! You gentleman were an absolute pleasure to have in camp! That Vaal Rhebok was a dandy! I look forward to seeing you in Deutschland in Jan 2013!

SOUTH AFRICA: KMG Did It Again