As we edged uphill through the sodden trees and cold fog below the cliff face, I was feeling all of my nearly seven decades and the six-thousand feet of altitude. I thought to myself that I really was getting a bit old for climbing around the Carinthian Alps looking for a small brown mountain goat. A fresh blast of wind driven light rain served to underscore that conclusion. I had at least finally slid into the "one more step" pattern familiar to many who have contoured a steep mountain slope.

This particular quest really had begun forty-five years before when I was a young first lieutenant stationed in Germany. During the five years of that tour, I had the opportunity to hunt a great deal, game that included many roe deer, several red stag, and wild boar. However, during that time, I never had the opportunity to hunt a chamois (or "Gams" as it is called among Germanic hunters).

As the decades rolled by, that quest was overshadowed by the realities of a family, a profession, and eventually an African (and cape buffalo) addiction. Eventually, my spouse and I discovered the joys of European trips where I would hunt a few days, and then we would spend the remainder of our time playing tourist. Wonderful experiences ensued including Spanish Ibex and European wild boar.

One of those hunts took place with FN Hunting http://www.fnhunting.com/index.php/en/ where a conversation with the owner, Martin Neuper, over a bottle of wine celebrating a magnificent fallow deer and wild boar turned eventually to the Alpine chamois. He seemed very confident he could even get an aged flat lander like myself in range of a big male, and so a deal was struck.

The first day was a study in frustration as the weather refused to cooperate. The valley floor and foothills were reasonably clear, but the higher elevations were buried in impenetrable fog. Throughout a long morning, Martin and I crept from vantage point to vantage point only to be stymied by impenetrable fog that made open ground only a couple of hundred meters away completely invisible. The periodic, cold misty rain did little to improve our mood or our chances.

At noon, we finally took a break in a small mountain hut for a lunch of heavy German bread, wurst, and cheese. Ice-cold, crystal-clear water from a neighboring spring formed the basis of a couple of cups of hot tea. Fortified, we again set out, but after a couple of more hours of fruitless creeping among the trees and rocks, we called it a day.

We did bump a Gams at perhaps thirty feet during one of our forays while moving to another spotting attempt, but a shot was impossible even if we could have somehow judged the animal.

A relatively short drive down the maze of logging switchbacks (the drops on the passenger side were not for the faint of heart) and a bit of country highway had us back in the warmth of Martin’s lovely home and among the aromas of his wife Andrea’s gourmet cooking. A long hot shower, fabulous meal, and wonderful bottle of Blaufrankisch red left me feeling almost human again.

At dawn I added a couple of Advil to breakfast, and was ready to step out as we parked Martin’s truck at the trailhead. The clear air and promise of visibility gave me an energy boost despite the lingering soreness from the day before. 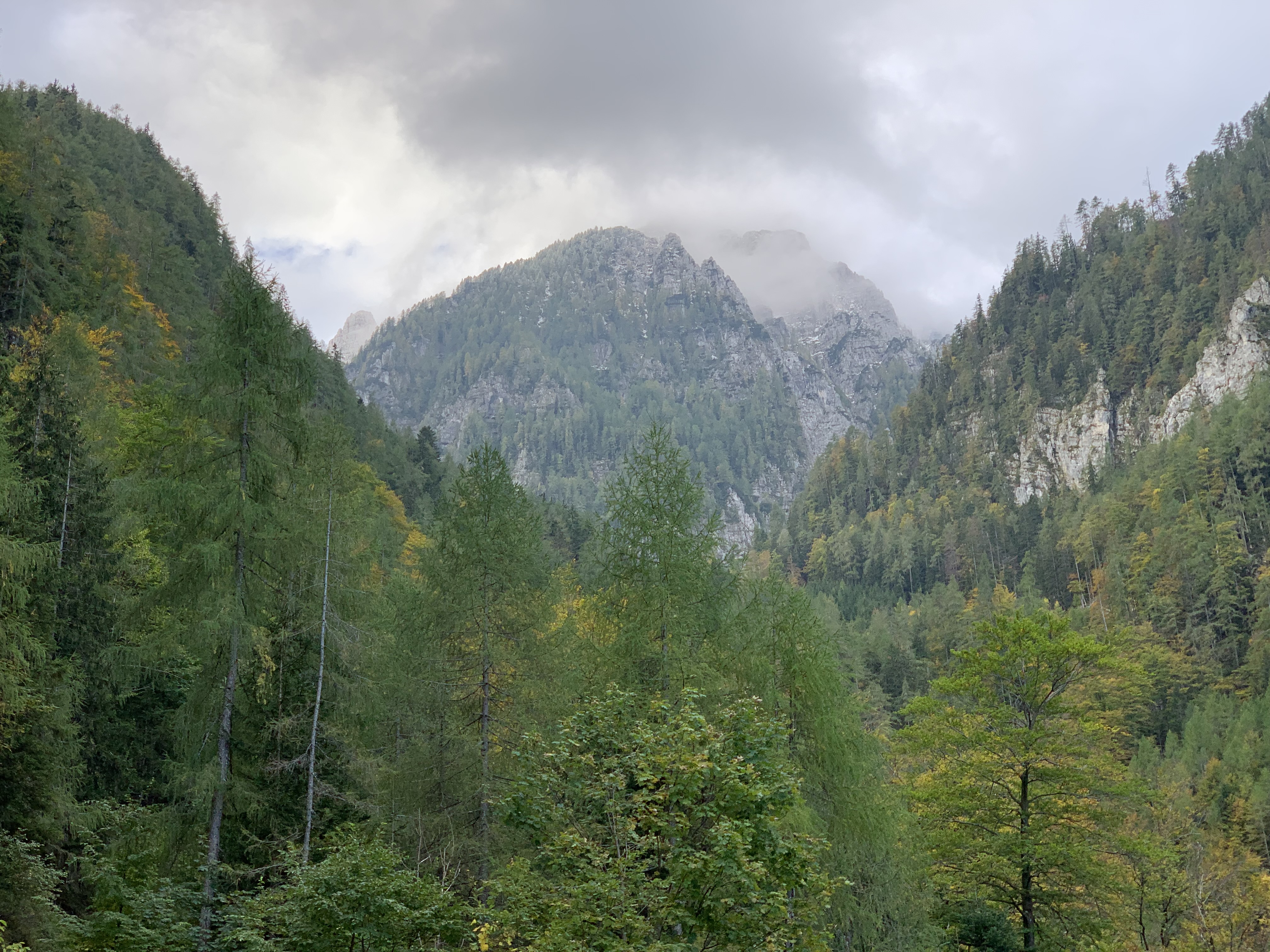 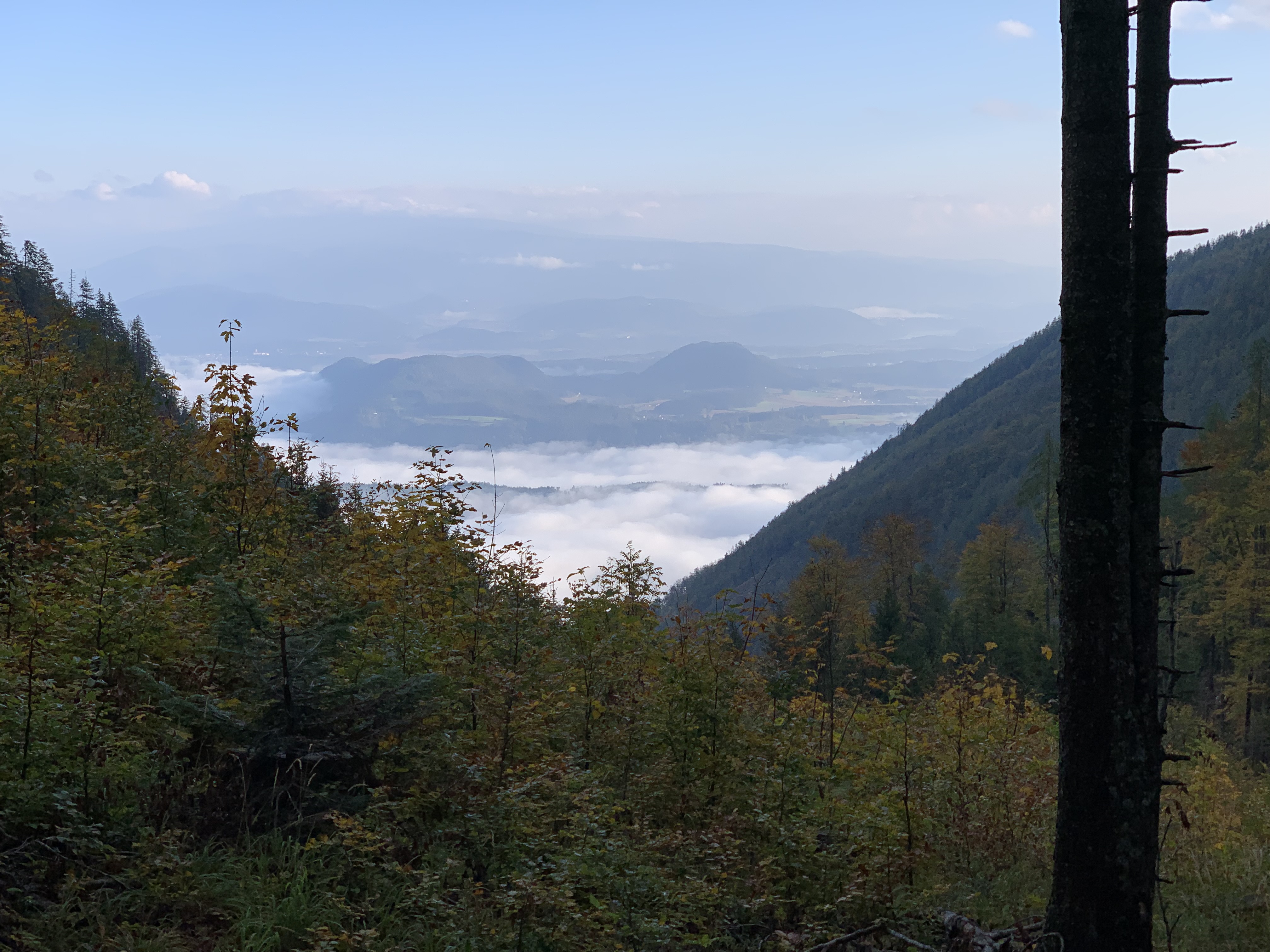 We had not gone but a few hundred meters when Martin suddenly stopped and set the sticks (we were both carrying African style sticks bound in rubber that served double duty as hiking sticks on the steep terrain. I was using one of Martin’s splendid rifles, a Mauser M 03 in .300 Win Mag with superb Swarovski scope. A half step to the right and I was immediately on the animal. Martin whispered “shoot", and the gams only dashed a few feet before collapsing. Seven years old and sporting 102 cm horns, he was a magnificent way to conclude a quest of nearly half a century. 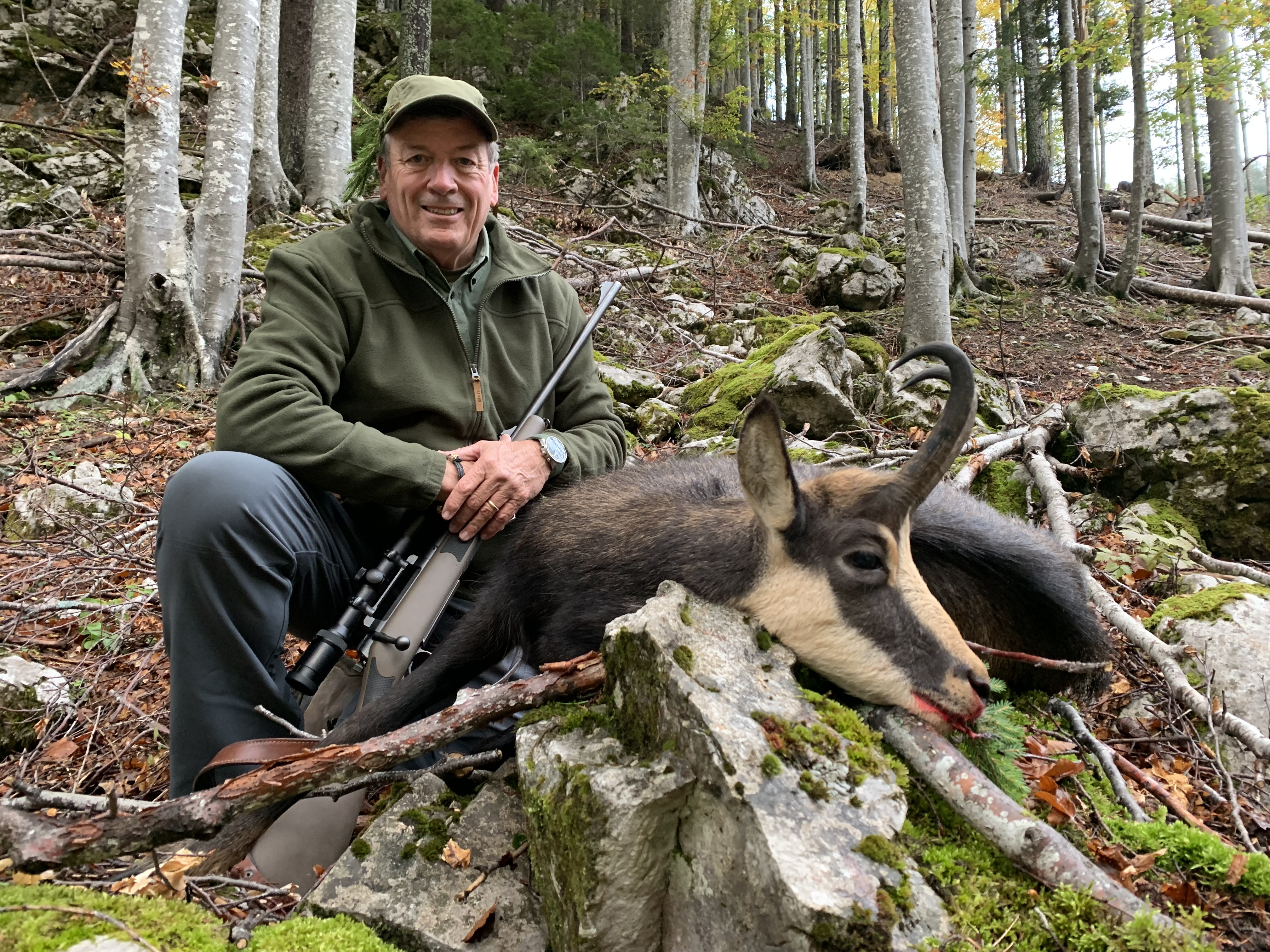 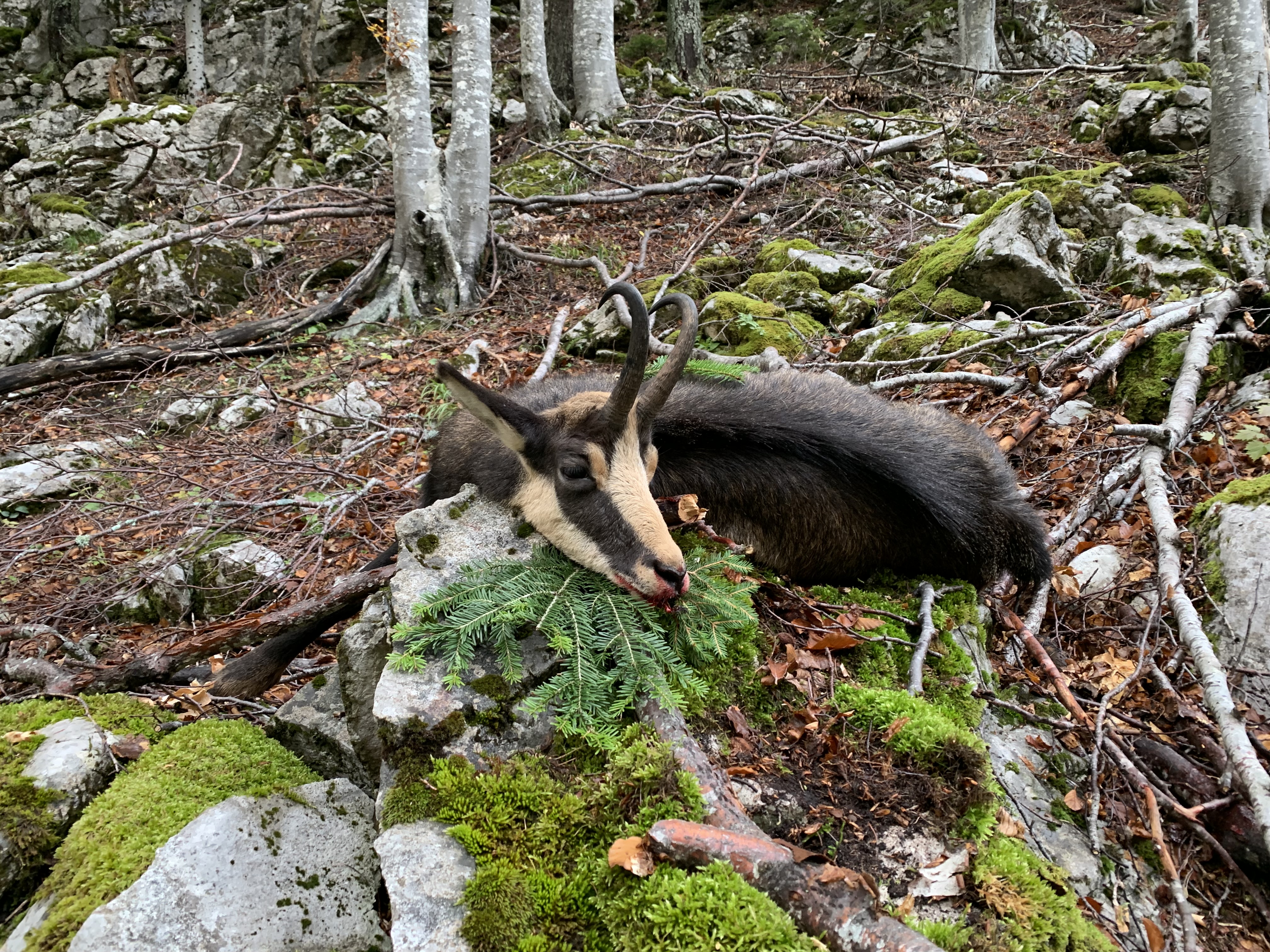 As we celebrated that evening, Martin noted that we did have a couple of days more available for hunting. He suggested driving to their huge revier in the Punitzerwald where I had taken the Fallow Stag and wild boar. He made me a great offer on a management red stag and held out the possibility of a huge Sika that had been seen for a couple of years but never taken. The Manchurian subspecies had been released into the area by the regional Graf decades before and are often encountered both free range and on estates.

Early morning found us drifting through a wet forest over a layer of fall leaves that were mercifully quiet due to overnight light rain. October was pretty much post rut in this area, so red stag would be a challenge. Still, the forest was very open, offering us an opportunity to spot game at a distance. A splash of dark red soon materialized into a hind and calf, but nothing with antlers was escorting them.

Some while later, a pair of dun brown animals took off from our downwind side. Martin knelt to try and catch a quick glimpse through his binoculars. “Sika” he whispered. We slowly and carefully backed away, and then began a fast hike to gain the wind advantage.

Soon we were again drifting through the wet forest, but now with the wind on the opposite quarter. Cresting a low ridge, we both quickly spotted a large animal stamping in a mud hole and thrashing his antlers in the water and mud some 150 yards away. I immediately assumed it was a small red stag, but Martin instead whispered, “it’s him!” and set the sticks.

I questioned nothing about the appraisal, and instantly set the rifle. The deer saw the movement, and froze facing us directly. I do not much care for facing shots beyond 100 yards, but I was steady on the sticks and M03 has a trigger just as good as my familiar Blaser. Centering his chest with the crosshairs, the big deer collapsed at the shot. 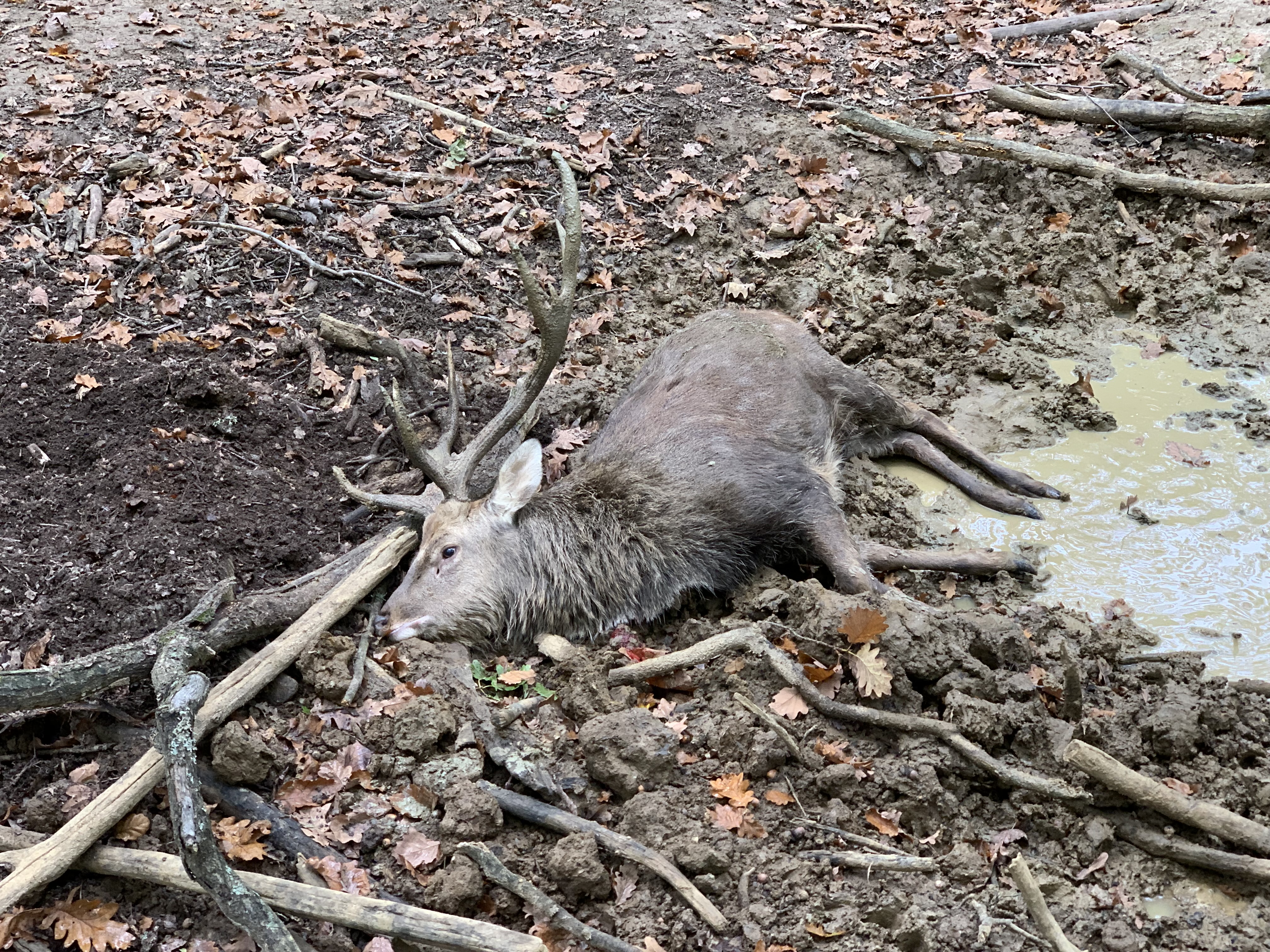 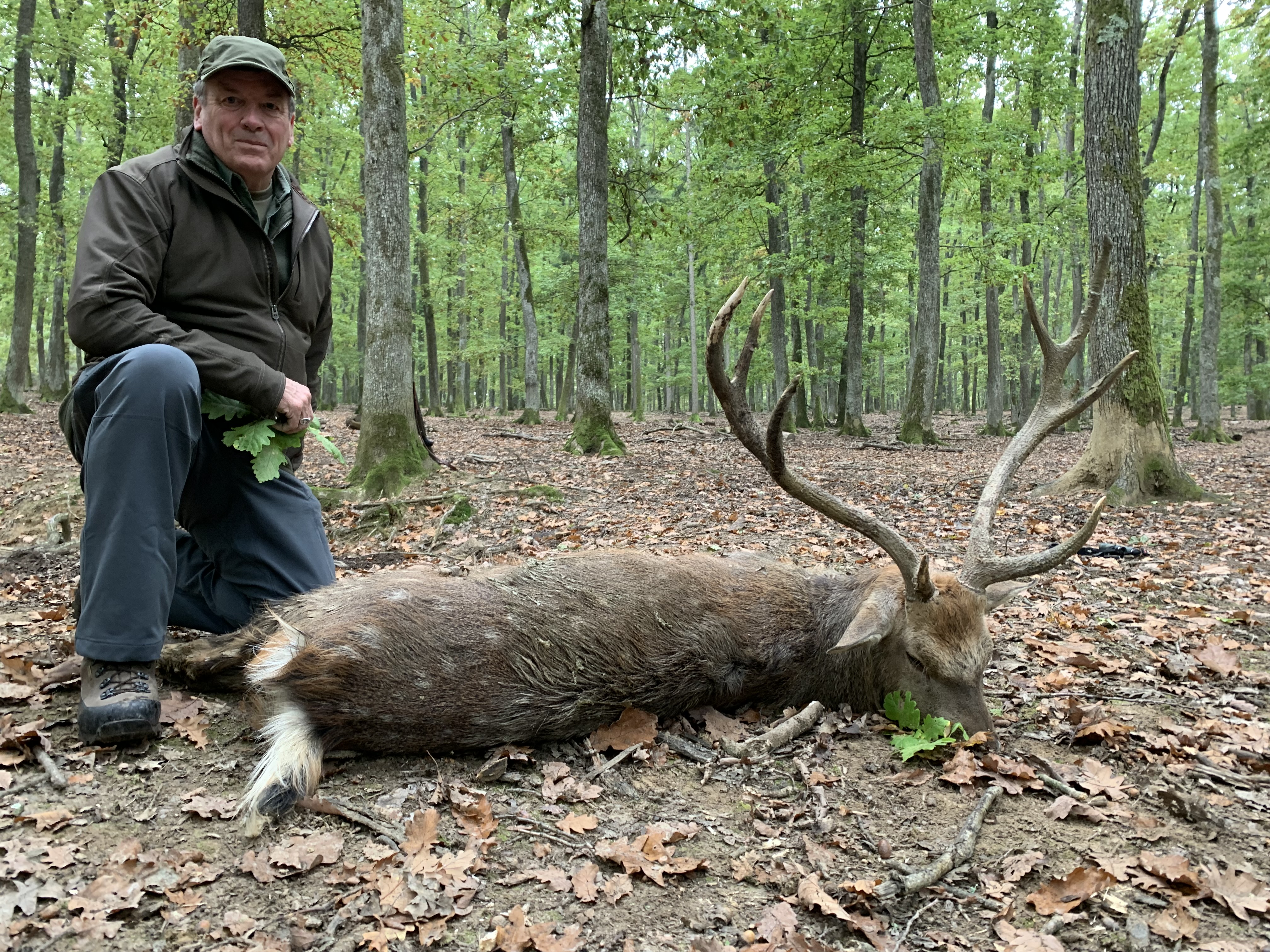 And a huge deer he was. He will score many inches above the gold minimum for SCI. In fact, this may be one of the few animals I do score and submit simply because of the potential notoriety the animal might bring to FN’s fabulous hunting opportunities. And as promised, the trophy fee was the same as a management red stag would have been.

For those of you who have hunted elk or red deer in the rut, particularly one that has recently been attending his urine and semen filled rutting wallow, you can imagine how filthy we were after gutting and loading the animal. But it was a truly happy sort of filthy that was easily cured later that evening with a long shower, fresh clothing, and several fingers of good scotch.
Last edited by a moderator: Oct 13, 2021
"We sleep soundly in our beds because rough men stand ready in the night to visit violence on those who would do us harm" American Novelist - W. Churchill

Red Leg, that was one he** of a hunt. I trust you are going to have that big rascal properly mounted!! Beautiful photos and story as only you can tell it. Congrats all the way around.

Excellent write up as usual and animals harvested.

Nice traditional poses for two very nice trophies.
Congratulations, on making the quest up those rocks and getting the job done.

You are "killing it" this year my man !! Bravo.

Wow, incredible animals, incredible views, incredible hunt! Thanks for taking us along. It’s fun to see a completely different terrain and less common species. If that doesn’t bring attention to hunting there, what will?
Well done at every turn.

What is next on the tourism list of your trip?

Your smile says it all!! Congratulations

Seriously, that’s some very epic landscape to match the end of your quest for the Gams. Quite fitting.

The Sika is also quite impressive. When I flipped through the pictures (as I often do before reading), I briefly thought it was a Red when I saw the first picture.

Outstanding hunt. Congratulations on a wonderful experience and fine trophies!

Congratulations Joe. A great and successful story as always. A short chapter in your World Hunting Stories I am confident you will publish some day!

...seem to recall being totally hammered a couple of times at sci with Martin and his madam........
Click to expand...

That could well be. They are there every year and great folks who I am sure can hold their own.

"We sleep soundly in our beds because rough men stand ready in the night to visit violence on those who would do us harm" American Novelist - W. Churchill

"The past is a foreign country, they do things differently there." L.P. Hartley
M

Great hunt, fantastic report, and wonderful pictures!
When reading it, i felt like being there!
Congrats, Joe!

Red Leg said:
That could well be. They are there every year and great folks who I am sure can hold their own.

Yup they can big time.

Unfortunately it lives high up in the Pyrenees mountains, too high for my old knees

, the only huntable animal in the country I don´t have.

That sounded like a great time! An adventure that rolled from one to another is priceless. Congrats
"When my friends tell me that I have led a remarkable life, I have to admit having done my best to make it so" - John Kingsley-Heath