Someone noted I did not introduce myself in my question to another forum.

I had software working against me on my initial attempts to post. Jerome sorted this and I got excited posting all over here.

So I’m from Australia and I’ve always been fascinated about Dangerous game and Africa from the time I was young and had access to firearms and related literature.

I was lucky enough enough to grow up in a small remote town with an interest in modern sporting rifles,shooting and generally hunting pest animals in Australia.

I’ve watched some African hunting stuff and while the flora and fauna vary I see it’s somewhat similar to home.

I read about firearms,improvements and accessories etc.

I like the movie The Ghost and the Darkness, thenera, the scenery, the story and the dream of Africa.

I think they call it a romantic notion?

Any Dangerous game has some appeal to me but others the antelope species or a mate back home is keen on the deer species across our continent. Him a true hunter who hunts for the fair chase buyback also eats the spoils of his hunt.

We share a common interest, he loves the hand carved Warthog on my mantle (origin unknown) and we’d both give anything to bag a Grizzly Bear and bring it home but it’s cost prohibitive.

We’ve only met a few years back through work and rarely meet but being gun nuts the conversation is never boring the subject can go on into the extremities of scopes, accessories and so on.
Chris “Australia"
Dreaming of Africa, Hunted Africa, 2020
The website made me do it!

Read your tag line Chris, "dreaming of Africa". Stop dreaming and get going! Welcome by the way!

Africa is cheaper than a person thinks. Do a little investigating and build a trip.

Welcome again Chris to AH! Interesting to read your intro. How about a picture of the warthog carving? It sounds unique.
I’ve only been to mainland Australia a few hours, but would love to return. Spent 11 days in Tasmania which is a fascinating island and some of the friendliest people I’ve met in all my travels!
Africa on my mind.

Welcome to AH Chris! Glad you found us.
Jerome Philippe, Founder of AfricaHunting.com

Thanks for stepping back and creating the intro.

Welcome aboard Chris. What animals have you hunted in Australia? What kind and caliber rifles do you own?

Thanks all, I own a couple of .22’s for rabbits, I use a .223 for spotlighting foxes, I have a Tikka CTR in 7mm-08 a cartridge that always fascinated me. It’s readily available but not as common as others but possibly a great all rounder. I have a .308 for hunting, a .300wmand a .458wm and a Tikka light stainless in .22-250.
Some were secondhand and some found on special like the .22-250 being a T3 not T3x it was about a third off.
I’m now at the stage where things are getting easier and I will start committing time and money toward hunting.
I hunt pigs regularly or at least carry my rifle I get one every couple of times I go for a walk.the area where I work and hunt is mostly dry
Chris “Australia"
Dreaming of Africa, Hunted Africa, 2020
The website made me do it!

Chris, what size pigs do you normally get? Do you have any photos? Do you need to use any kind of bait? Do you hunt on private or public land? What part of Australia do you live in? Do you have any restrictions on the number of rifles you can purchase?

My pigs are only average, 80kg live weight would be max.
We can hunt over bait, we should not use meat as it can be a source of spreading disease but pigs eat of carcass anytime they can particularly if it’s dry.
We could use the timed bait station that I see on You tube etc, I think they are also deer feeders. Used in America.
I once layer a truck Tyre in the paddock and used grain as bait. We often soak it as they like the smell when it freemen’s. They pushed that tyre around but but I pushed grain inside the tyre each fill to keep enough to keep their interest
I hunt private land. With permits there is limited places to hunt public land.
I’m in western NSW so no public land access near me.
I’ve trapped pigs on both private and public land as a part of my employment.
I don’t think there are restrictions on numbers of firearms but they tighten up security requirements. We need genuine reasons to have licence, hunting,target, employment. collector. Getting a semi auto requires further genuine reason.
We get a permit to Aquire each firearm $30 we sign a declaration saying it will be used for approved genuine reason on licence. So I could have numerous target rifles declaring them genuine reason. I know of people with in excess of 100 firearms many with 10 or more. I think there will be a time when they look at those with large no’s and require further reason why. I hope not if they are secure and people are approved then good for them.
Chris “Australia"
Dreaming of Africa, Hunted Africa, 2020
The website made me do it!

A pig that was in my pics for:sometime back. Tikka .308 Laminated stainless and a Zeiss Diavari 2.5-10.50.
Beautiful scope but looking to add lighter scope and stock for regular walks and hunting just because it can be done. 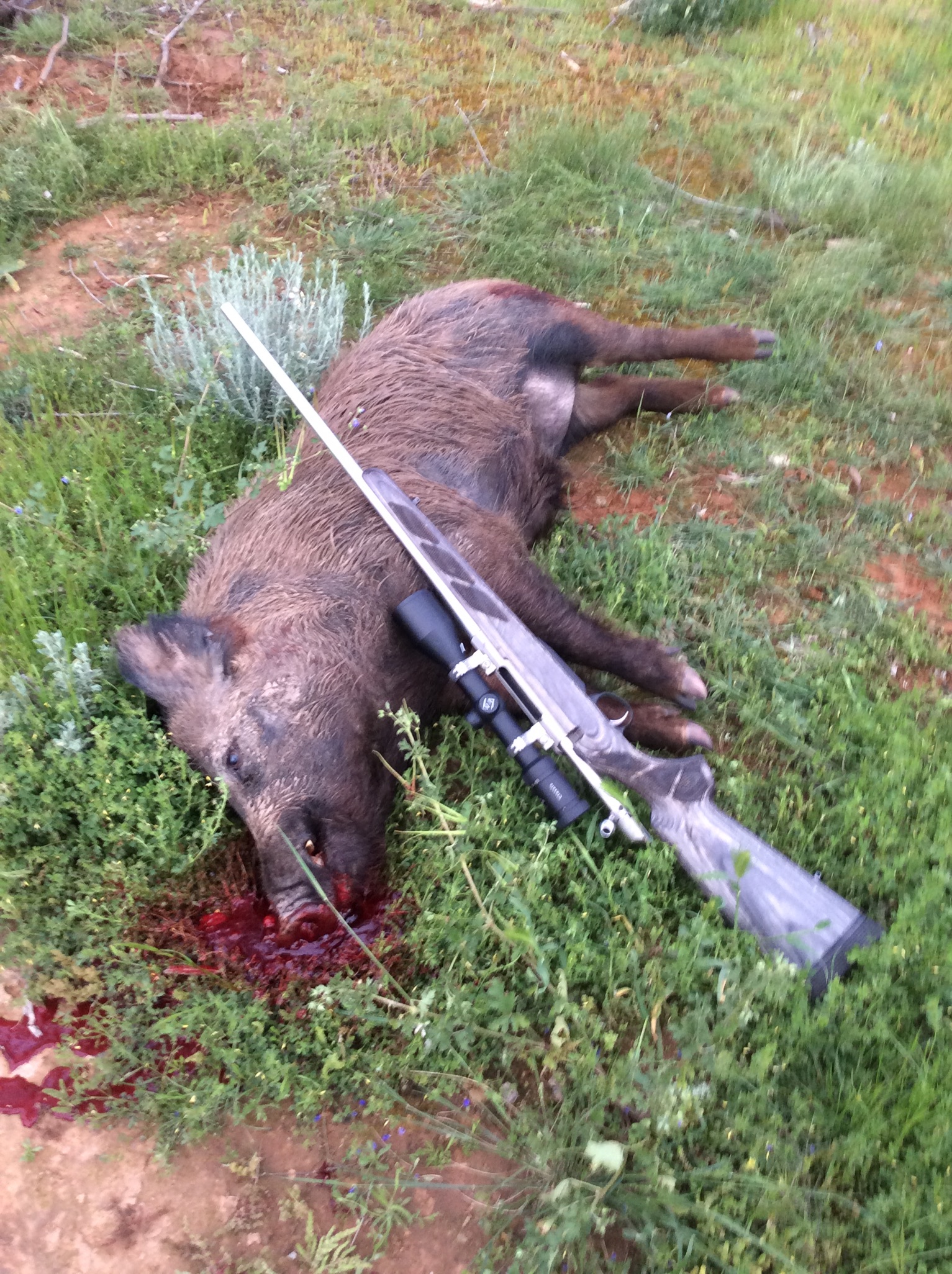 Chris “Australia"
Dreaming of Africa, Hunted Africa, 2020
The website made me do it!

Ridgewalker asked see my carved Warthog. I was travelling.
I call him Pumbah.
I found it at a garage sale and the owner who i considered slightly eccentric was an artist (painter) i didnt apreciate his art but thats life. It looks like Pumbah is missing some bone tusks. He said the piece was made by an artist. I dont know the history. Its probably made by an African worker making souveniers who has real talent and should be described as an artist.
It was one of those weeks when cash was tight and i wasnt sure how badly i wanted it, i beat him down to $20. Remember its origin unknown.
Well its become one of my prized possessions. He lives with me at my work based cottage where i spend half my life. I used to refer to that as the "Batch Pad" the Minister for peace dubbed it "The Hunting Lodge" so i keep the peace. Thats genuine dust from single living sitting on the mantle . Im on National Park but i can wander onto the neighbours to shoot pigs or spotlight foxes.
There is a .458wm cartridge under his nosr for comparison for the DG fans and a .308 shell that sits there as i shot a Fallow Buck with it near work. 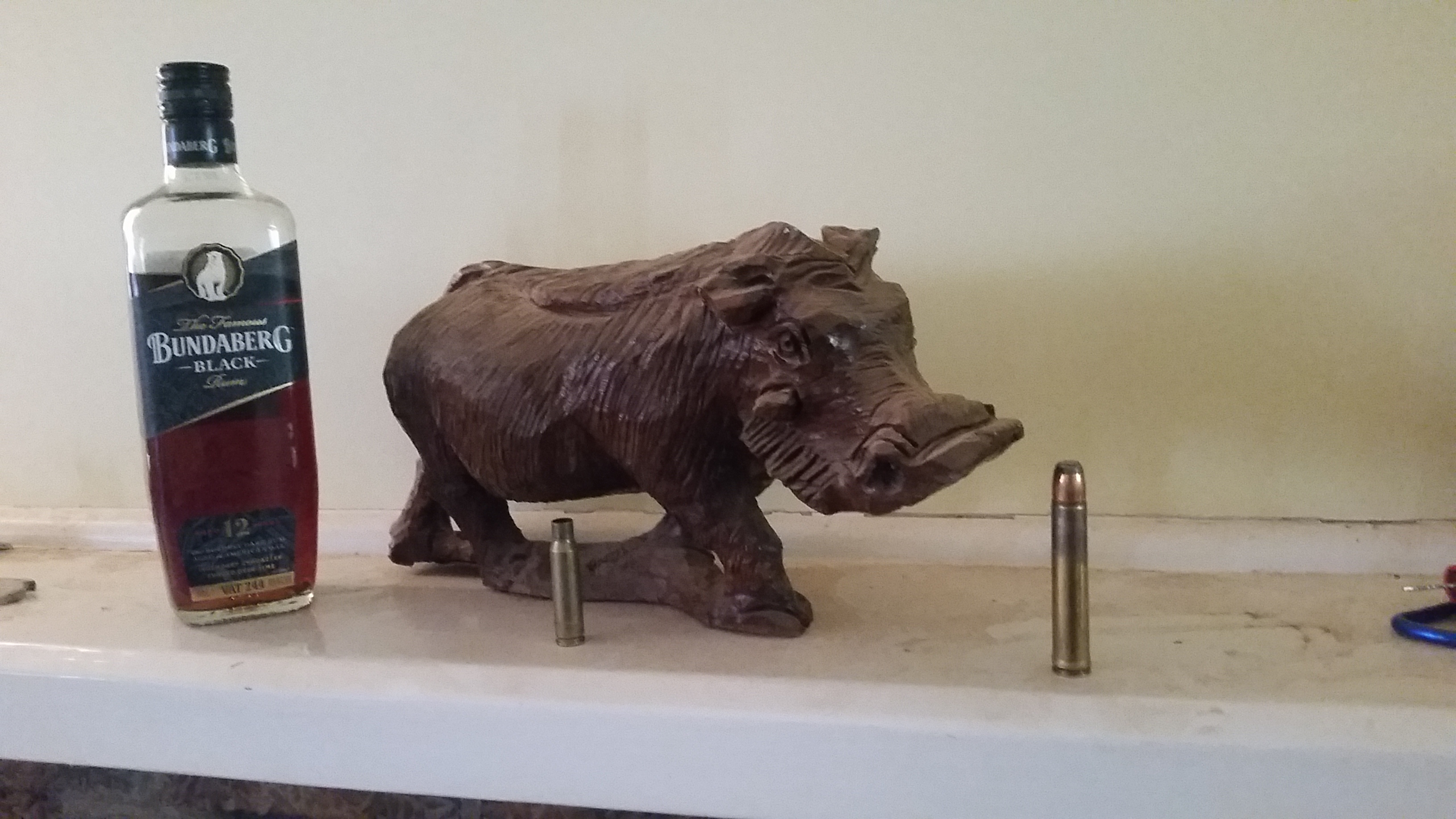 Chris “Australia"
Dreaming of Africa, Hunted Africa, 2020
The website made me do it!

I know, You want to see the Fallow now. I live a simple life at work so its printed on normal a4 and framed in a plastic folder sleeve.
My nieces were with me when i stumbles across Buck so i hung the pic when they were next coming to visit 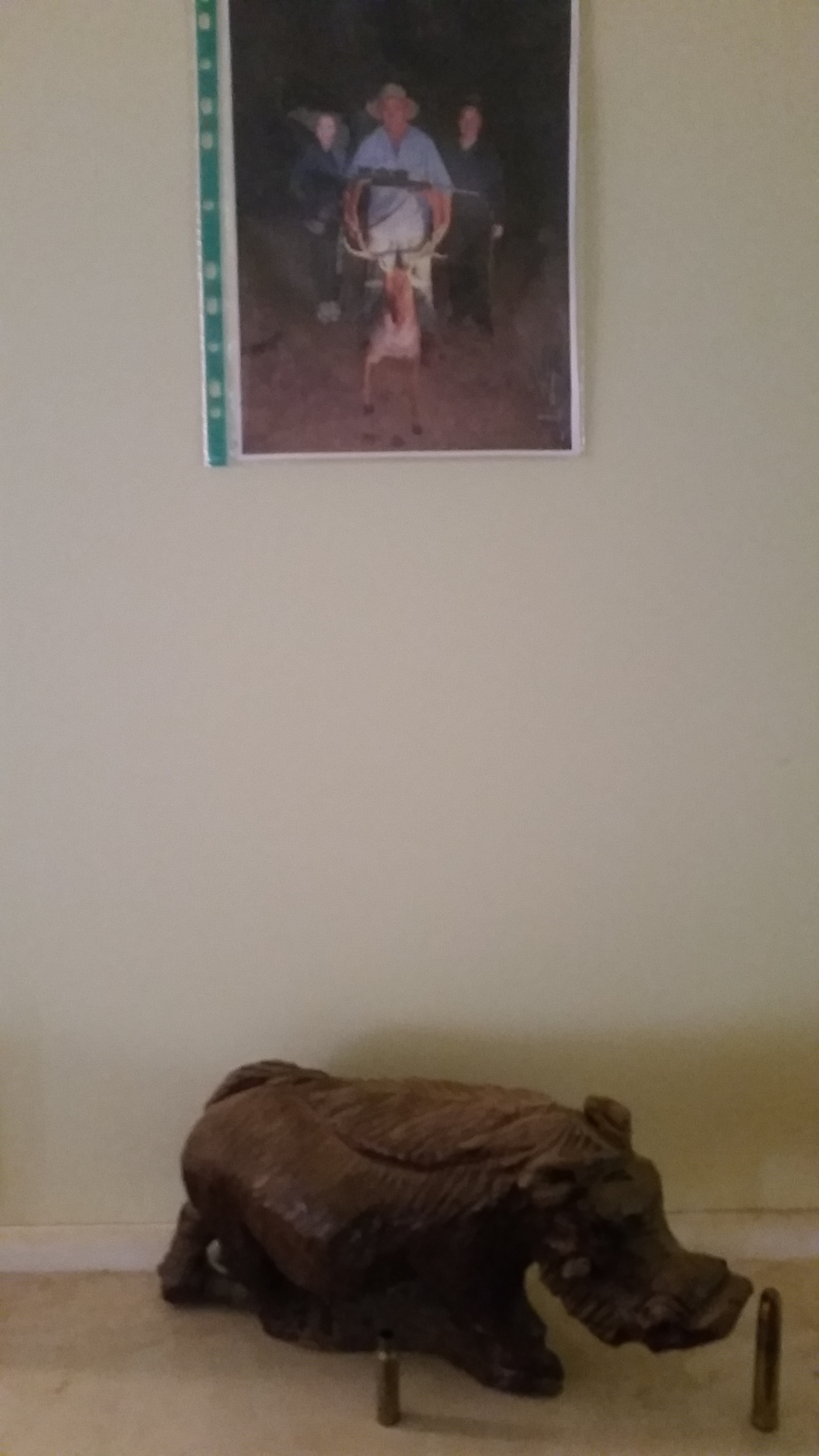 Welcome to AH Chris! Glad you found us and joined our community. Enjoy the site!