Daybreak! At first light we saw a dingo transiting on the edge of the forest from the night’s hunt. My guide Clint and Alannah the photographer were taking my son, Craig and me out to look for buffalo and scrub bulls. Already the humidity was building and I knew it was going to be a very hot day.

The water holes were shrunken by the lack of rainfall. There are almost no magpie geese to be seen, which was extremely unusual at that time of year (November). I glassed the areas including the edges of the scrub and peered in through the forest of thick scrub. Alas, nothing. We found various piles of buffalo and cattle dung; some fresh, some old. Craig and I walked in through the scrub looking for various signs but at this stage of the morning we could find nothing but old hoof prints.

Clint would point out where he had shot buffalo before but, much to our dismay, we could see none. I dare say it was due to the lack of rainfall and water holes that were rapidly drying up. The grass was dying or at least appeared to be and was a brownish color but in many places, it was lush. Alannah at this stage was taking photos of spiders and trees to test her new camera. What surprised me is that there is virtually no sign of life except for a couple of wallabies and the only dingo I saw was the one that first light.

Clint drove us along dirt tracks here there and everywhere looking for fresh signs. We stopped at one place to watch hunters attempting to shoot magpie geese that were flying overhead. Incidentally, you must use steel shot and not lead shot. The freshwater pond had shrunk dramatically and the magpie geese stayed in the middle which was unapproachable by the hunters because of the mud. In any case they are not allowed to shoot the magpie geese on a pond or water hole. They can only shoot when they were flying and these geese were not stupid and they flew very high out of the range of the 12 gauge.

This was starting to become a case of whether we would even see anything? We drove a fair way along the dirt track after watching the magpie geese hunters and Craig commented that he could smell cattle. We got out and began out hunt. Nobody else in the party could smell the cattle, but fortunately Craig could. Craig commented that it smelt like a cattle yard. The wind was favorable to us as we walked towards the thick scrub.

Clint said, “there’s a scrub bull!” I am glad he saw it because it was extremely difficult to see in the scrub and tended to blend in with the trees. In the photo you can see what I mean. I would have missed it in amongst the trees as it just seemed to blend in. The bull was on to me as I walked towards it to get it clear shot. From where I was walking he looked to be a fairly big beast and as soon as I got a clear shot at the shoulder, I fired so that the bullet would hit about 2 inches from the peak.

The 400 grain Woodleigh Hydro in 416 Remington caliber hit where I aimed and the bull went down.

I reloaded immediately. I could not believe it, but the bull was on his feet and started to hobble away. I fired again, but just skimmed the animal as he was trotting (of sorts) and Craig asked if he could have a shot. Now off the shoulder at a running beast is not the easiest, especially when it was so hot and humid and Craig had never fired the rifle before.

The bull ran down a very small gully and when he reached the other side, he turned around to face us. Fiercely, the bull could not run anymore because of the broken leg. Craig fired but I am not sure whether the bullet hit the bull or not as he did not flinch. Craig fired again. I had a shot and unfortunately I got shot him in the belly area due to the fact that we had been running by now and this is off to shoulder with no rest for the rifle. Craig had another shot and the bull dropped. When we got to the bull, he was still breathing, so I gave him a “mercy” shot at the back of the head. I was truly surprised the animal could even move because obviously the first bullet broke the right shoulder and the bullet exited through the lungs and out through the left shoulder area.

This bull was a lot tougher than anybody could have imagined. Alannah was there as well as Clint by this stage and took a photo of the bull. Craig took numerous photos with my iPhone camera, but these are not near the quality of Alannah’s. I retrieved a sharp but brand-new knife I bought for about $35 and attempted to take the back straps of the beast. This is hard to believe but I could not cut through the hide of the bull with this knife except by sticking the point end in first.

I then retrieved my new Von Gruff knife that I had and it just cut through the hide like a hot knife in butter. The backstraps looked to be a particularly good nice color and depth. I always like to take the backstraps because they are great for all sort of things from casseroles to grilling. I used the VG knife to butcher the animal and I know it is hard to believe the knife was still razor-sharp when I finished and at no stage did I have to sharpen the blade. I was truly impressed by the quality of the knife.

It was 8:13 AM when I shot the bull and within seconds, when butchering the beast, my shirt was wringing wet. My conservative estimate of the weight of the bull was 800 Kgs (1760 lbs). The bull had a small hump, obviously a part Brahman, and most likely either domesticated at one stage or was born in the wild to a previously domesticated animal that escaped from a cattle property.

We walked back carrying the meat to the car. I let both Clint and Alannah have a shot of the 416 at some empty soft drink cans. Clint had no issues with the recoil, but I was really concerned when Alannah wanted to shoot as she is very small. I made sure she held the stock very tightly because I was concerned that the scope would whack in the head. Unbelievably, she had no issues at all. I was actually impressed that she hit the target, especially shooting off to shoulder with no rest and such a big caliber with fairly substantial recoil.

We then drove along the dirt track for about 5 minutes or so and as we did Alannah stated that she could see more scrub bulls in the distance. We could see a tan colored beast at around about 400m. We started the stalk. Obviously the cattle saw our movement and bolted. All 4 of us walked to where the cattle were and could not find them anywhere .

So, we went back to the car and as we got to the car, we turned around and saw that the cattle had returned from where we do not know.

I started to stalk, but the cattle ran off again and there is no way I could have got a shot even when they were still because it was a about 400 m and I was not sure of the trajectory of the 416. In addition to the fact that I want to make sure they were wild cattle and not some domesticated cattle strayed from a property nearby. This time the cattle did not return and that was the end of the day’s hunt as he had to get me back to refrigerate as the heat was unbelievable and the humidity was such that I expected to see fish in the air.

Clint told me only a week or so ago that the backstraps were very tough and I guess it was because when I shot the bull the adrenaline would just pumped through the whole system. Clint’s dog, Luna gave birth to 4 pups. Apparently the pups enjoyed the backstraps along with Luna. I suggested to Clint and Alanna that they should casserole the backstraps and other meat in a very slow cooker over say 12 hours.

In any case the meat was put to good use and I guess the pups’ chewing will help their teeth and stop them from chewing everything else on site. My next hunt will be after water buffalo in the Northern Territory. I am hoping to get decent sized buffalo with the 416. 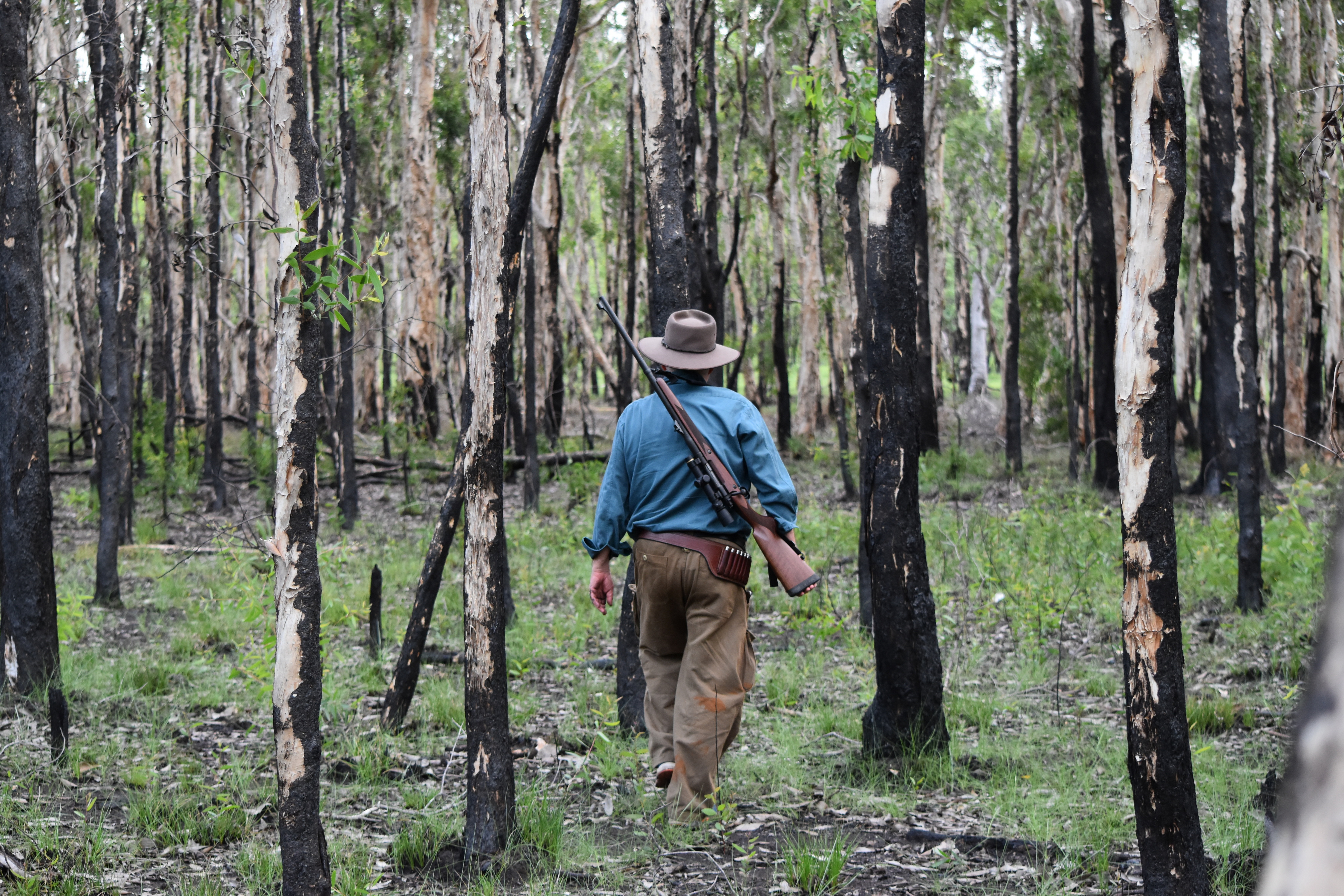 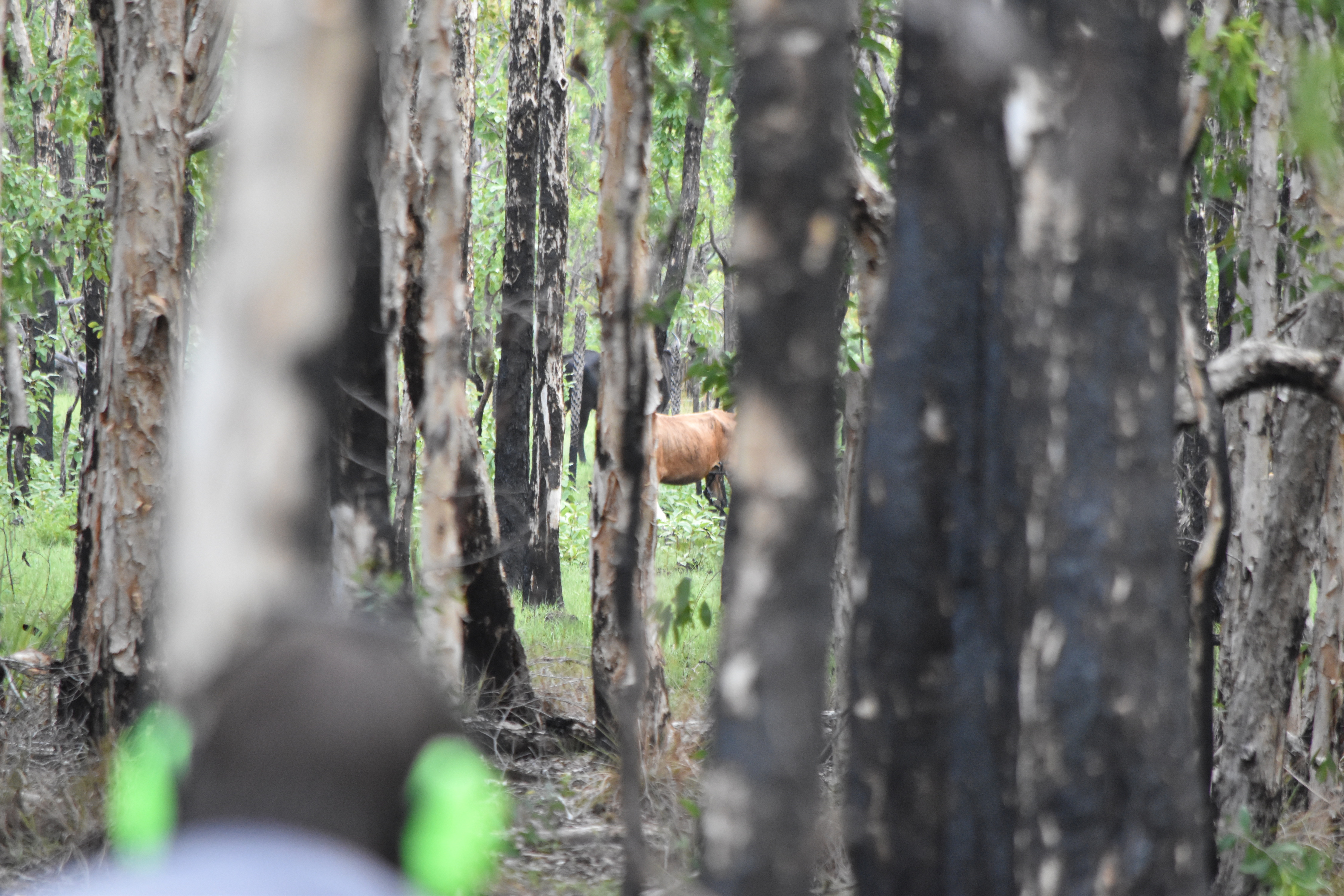 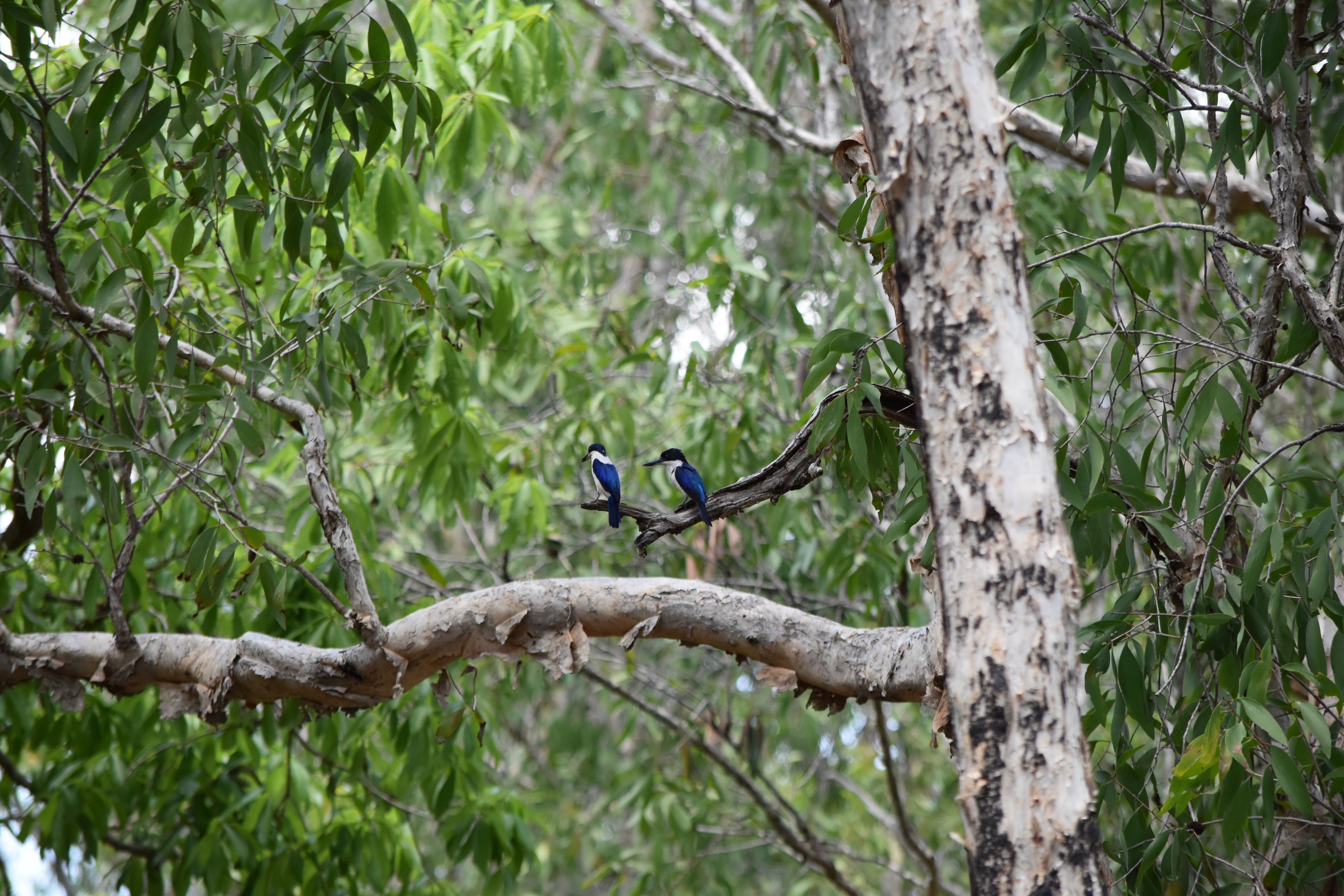 Dr Ray, those birds look similar to our Kingfishers.
Fun report! Sad the meat was so tough, but the dogs loved it I’m sure!
Craig smelling the scrub bulls reminds me of elk hunting. Many times I have smelled them before seeing them.
Thanks for sharing!
Africa on my mind.
B

too much bullet ray?
can be as bad as not enough bullet.
certainly not a 400 yd bullet.
that looks like a very nice cartridge belt.
where do you get them from?
bruce.

I understand that. Woodleigh has given me 450. Grain protected point Bullets to try.
Interesting to see the results.

Bought it from Baz 500 but not sure where he got it. Perhaps Zimbabwe ??
I’ll ask him.
You must log in or register to reply here.

AUSTRALIA: Northern Territory In The Build Up
2

A
Akunasek Jager Waffen74 Akunasek wrote on Jager Waffen74's profile.
do you still have the Ithaca 10 ga semi auto?
36 minutes ago •••