AUSTRALIA: My Last Hunt With My Son For Quite Some Time

My last hunting trip with my Son for a while. 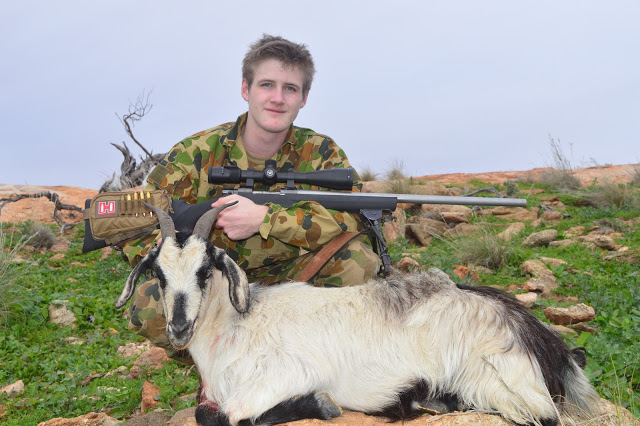 Jack with his Goat from our last hunt together for some time.

I took the opportunity to get away for a couple of days last week with my son, this would be the last chance I got for quite some time to hunt with him and for us to spend some time together. He has joined the Army and is moving interstate so it will be some time before we can hunt together again. There is a silver lining to this dark cloud in that once he has completed his Basic Training he will be posted to the Bandiana training center just outside Wadonga for about 2 years. Yep just a short drive from prime Victorian Sambar country, so I guess I'm going to be doing a lot of Sambar hunting over the next few years, and visiting Jack of course.

We traveled North from Perth to Gabyon Station in the hope of hunting some Goats and we were not disappointed. As the weather was overcast and rainy we opted for rooms in the old shearers quarters, we supplied our own sleeping bags but if needed Gabyon can supply linen for a small additional fee if required. After unpacking all our gear we set off toward the hills where the owners had advised us we were most likely to find some goats. Having hunted a lot of Goats in Western NSW I knew in this wet weather they would be on rocky sheltered ground probably bedded down facing into the wind. So with this in mind we set about approaching the hills from down wind, hoping they would not see or smell us.

As we got closer to the hills we could start to make out Goats feeding on some of the flatter country and many more bedded down on the rocks out of the wind. We skirted the main part of the hill and climbed up a gully hoping to get above the Goats. When we reached the top we crossed over some open ground and started to look down the slope to locate the Goats, we soon found a small group feeding a little way down the main hill. I had a quick conversation with Jack and we decided to take a young Nanny for meat as there were no Big Billies in this group. We quietly got set up and Jack settled behind the rifle and I ranged the goats at just over 200 meters. I told Jack which one we should take and he confirmed he had the correct animal. We had to wait a while for a clear shot but the young Nanny eventually stepped clear of the other goats and turned to face us, Jack made a perfect front on central chest shot to drop the Nanny where she stood. 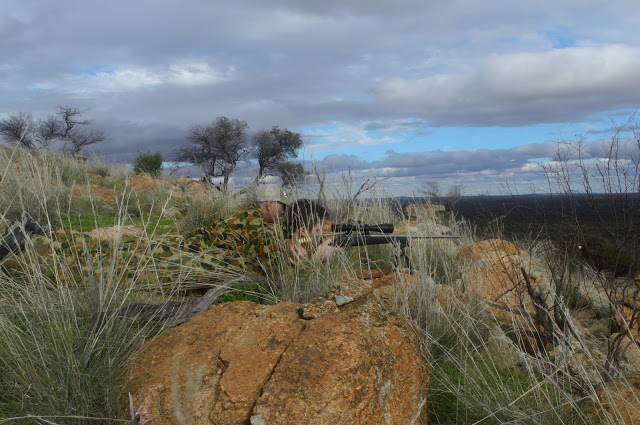 Set up and watching the Goats.

We waited for all the other Goats to run off before we retrieved the Nanny and Jack asked me how we were going to get the animal back to the vehicle. I told him he was going to carry it out Kiwi style as I tied the front and back legs together. I then helped him get the animal onto his back for the carry out. 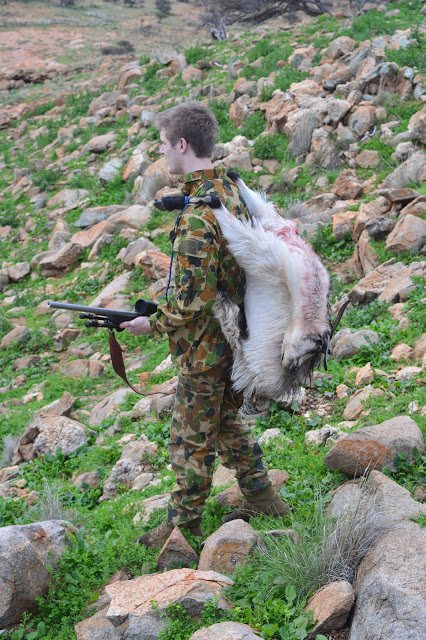 Carrying the Goat out Kiwi Style.

We stopped for a rest just before the final down hill walk back to the vehicle and took the opportunity to take some photos, before we completed the carry out. Once back at the vehicle we dressed the goat and then returned to the Station Homestead to hang it in the cool room. Once the goat was taken care off we set about making some dinner and a fire for the evening. That pretty much ended our first day and after dinner and a cup of tea we retired to bed eager to hunt again the following morning. 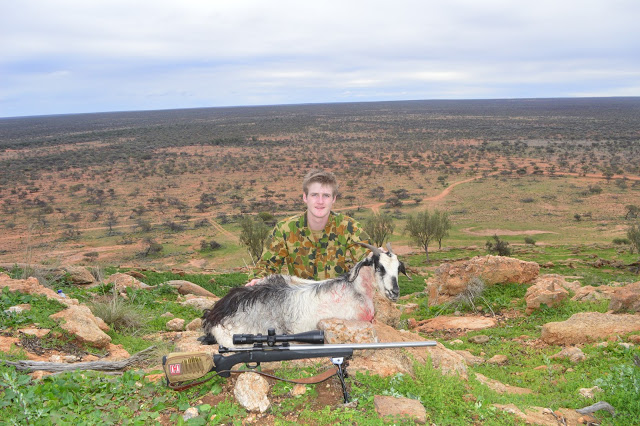 Jack with his Goat.

We got up early and after a small breakfast we set off to hunt some other hill complexes on the Station. We walked all day but saw very little as the wind was howling and very cold but we were pleased we already had some meat for the freezer. We had an early dinner and talked with some other guy's that had come up for the weekend for a short while before we built a big fire outside our room and sat around talking, just spending time together.

As I write this he has only been gone a day and so much has changed for me, for both of us. We have shared so much adventure together over the years, Spearfishing up and down the Western Australian Coast and Baja Mexico to hunting in South Africa's East Cape and the Kalahari. It only seemed fitting that our last meal at home together should be roast Goat.

It's only been a day and I miss him terribly, but I am so thankful for the times we got to share, I cant wait to see him again.

Looks like it was a good hunt! Congrats to the young man.

I appreciate the sentiment.
Thanks for sharing your tale.

I know what you are talking about.

My youngest girl has graduated high school and is turning 18 in a few days. By September 7th, she will be in college in Lethbridge taking criminal justice, while her older sister is there in year 2 of nursing. The wife and I will be empty nesters. The good news is, they are closer to my favorite hunting spot in Alberta. I've put in for our tags and we are making plans. So it is not all bad. When they were born, we knew days like these would happen. But how does 18 years go by so fast?

Thanks for sharing! Congrats
John 3:16

Thanks for sharing and congrats on the successful hunt. I am sure that young man will do the Australian Army proud.

Your son did have a good hunting. Congrats.
Witold

Thank you for all the positive comments Guys,

I started hunting with my two boys about 37 years ago. The youngest was 10 at the time. Our annual hunts simply put are events that cannot be missed. College, & Military obligations are details that need to be worked around. Now we are hunting with grandchildren. Believe me when I say that once you start hunting with your son(s) you will be doing it for a lifetime. Enjoy.

P.S In 30 days my sons and I are leaving for our first African PG Hunt.

Stay safe.
Tommorow is promised to no one. Go live your dreams.

Shootist43 said:
I started hunting with my two boys about 37 years ago. The youngest was 10 at the time. Our annual hunts simply put are events that cannot be missed. College, & Military obligations are details that need to be worked around. Now we are hunting with grandchildren. Believe me when I say that once you start hunting with your son(s) you will be doing it for a lifetime. Enjoy.

P.S In 30 days my sons and I are leaving for our first African PG Hunt.
Click to expand...

OH!!!! Now you have started something, you are going to love Africa.
You must log in or register to reply here.

AUSTRALIA: A Not So Exotic Sheep Hunt