AUSTRALIA: Managed To finally Blood The .458!

Here's a quick hunt report for you all

Myself and a couple of mates finally managed to all be free today, so we thought we'd head out to check some spots near home to see if we could see any deer sign.

These spots were only an hour and a half from home as opposed to the usual 3 hr drive we have to undertake to reach our usual deer spots.
We were all hopeful that these close-to-home spots would have some sign.

It must be said that it wasn't a very pleasant day in regard to the weather. Sleeting rain, cold, wet and muddy was the name of the game today but as you all know, anytime you can get amongst it is a great day!

So the first few spots we checked out produced nothing - and I mean nothing! No tracks, no droppings no sign at all.
So we moved to a new spot and straight away it looked more promising. After a while I started seeing a print now and then until finally, while watching some roo's fight about 300m away I saw something that didn't look like the other roo's... it was a deer!

Now in my book, 300m is pretty far - especially when your armed with a .458 shooting 510gn bullets. I found myself wishing I'd maybe brought my .300 Weatherby instead...
Because of the open terrain I couldn't get any closer, so I was content to watch him feed and take some pics.
I was doing this for about 10 minutes when all of a sudden he looked up. Something must of spooked him and he slowly started trotting... towards me! He was doing this for a while - all the time I was snapping pics, when it all of a sudden dawned on me that I might get a shot at him after all.

Ditching the camera I loaded the Zastava and crouched down by a big tree that was beside me and steadied myself. Looking through the Leupold I saw that he was still slowly coming straight towards me. He continued to do this until he was about 50 meters from me then stopped. This was my chance and I squeezed the trigger.
As I pulled the trigger the deer started slowly walking again and as the rifle boomed, I knew it wasn't a good shot. I'd hit too far back. I saw the deer react and it slowly started trotting again at a slight angle but still in my direction.
I furiously worked the bolt and loaded a fresh round while watching him through the scope.
He stopped again, and offered a classic broadside shot at about 40m from me and the big rifle boomed agin. I aimed for the shoulder once again but this time the shot felt good. Before I lost him in recoil I saw him lurch again and while I was reloading I saw him fall. He had travelled about 10 meters before he fell but I knew he wasn't getting up again. By the time I reached him he was stone dead.

I was elated! I had finally managed to blood my new .458 and I had scored my first Red Deer. It wasn't a trophy by any means but it was a unique hunt, in horrible weather and with lots of km walked. I felt I had really earned it.
After couple of photo's we took the backstraps and both front and back legs and then had the long, cold, wet, hard, muddy walk back to the car. It was well after dark by the time we got back to the car and we were wet through - but none of us cared. We were all on a high.

I also must quickly add that those 510gn projectiles really hit hard! My mates said they heard the THWACK! from a distance when the bullets hit the deer.
I'll also add that the rifle recoiled hard too! Although I didn't feel it when shooting the deer, afterwards when the deer was down I felt something trickling down my face... yep, you guessed it - a ripping Weatherby eyebrow!
(I've since moved the scope forward another 1/2 inch so hopefully thats a thing of the past...)

All in all what a fantastic way to spend the day. We had found a spot close to home and we all had venison in our freezer.

We were all cold, wet, muddy, exhausted, tired and bloody... and none of us would've had it have it any other way 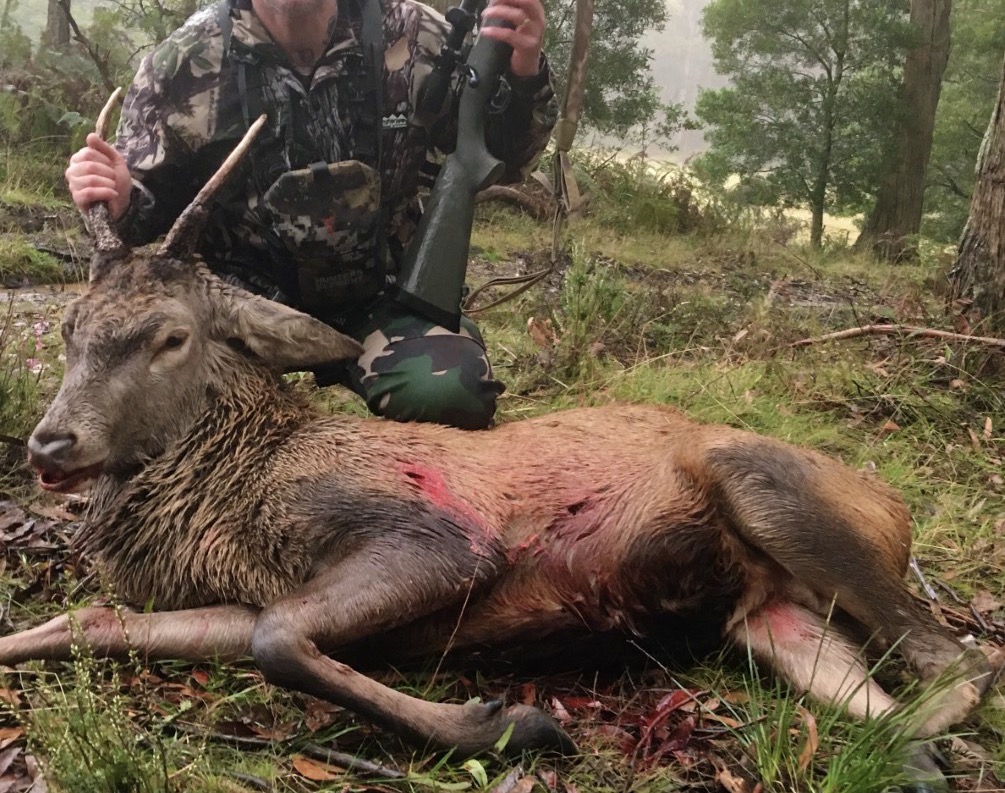 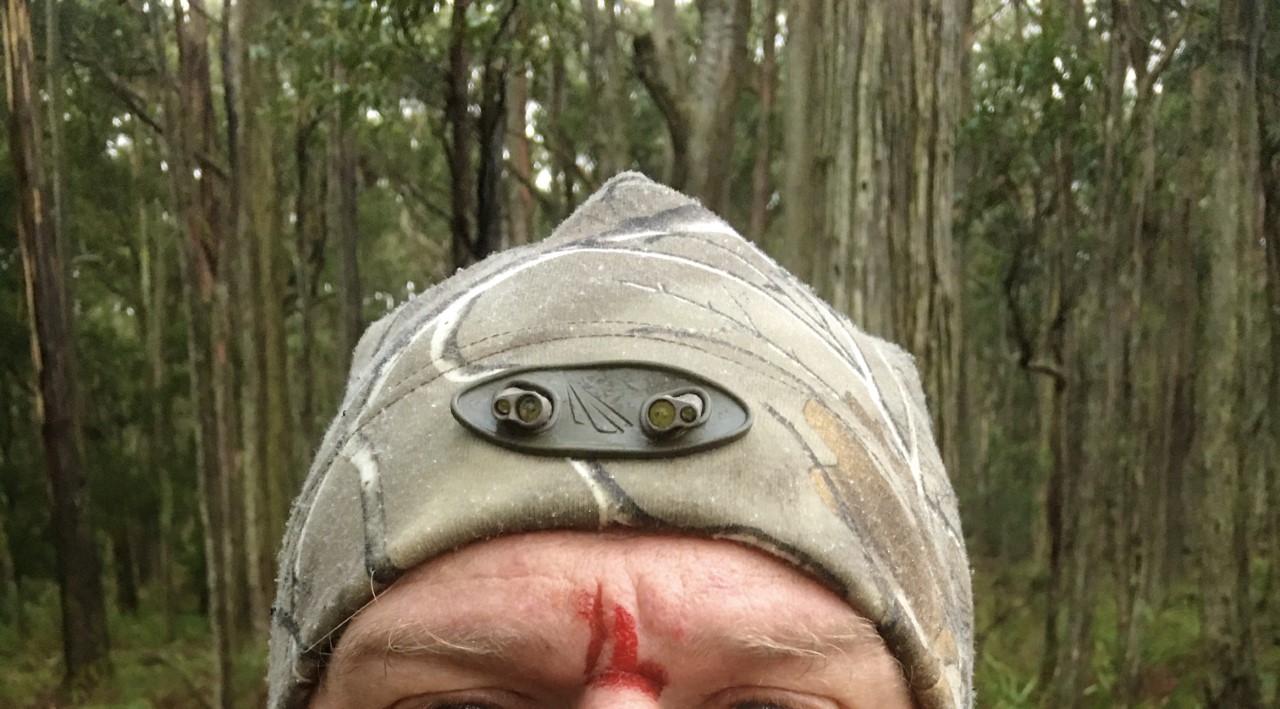 Congrats! I was fondling my .458 Win last weekend wandering how bad it was going to kick but also accepting that it’s a powerful rifle.

Badboymelvin, any idea why you got the "Weatherby eyebrow" in the field but not at / on a range? I'm glad some folks are able to get out and hunt. Our Governor still has all of the public shooting ranges closed.

Congrats to you sir! You take what nature gives you on a hunt. That deer Co I g straight for you says it was supposed to happen in my book. Hope you coked up some fresh back straps
C

Congrats on a fine looking deer! BTW, that “Weatherby” eyebrow is why I don’t/wont have a scope on my WM. I did get clipped like that once with my scoped Browning .338WM shooting from the prone position. Live and learn!

Good job on the red deer (elk ) and you can always say you blooded the 458 twice at the same time! Been there done that a long time ago. Soooo easy to do when concentrating on relaxing for nice smooth trigger break- dink!

Nice work, looks like lots of good eating ahead!

Congrats on your deer. It may not classify as a wall hanger to you, but it is still a trophy in the manner that it was taken.

Nice deer! That should be some good eating! I am not a trophy hunter when I am at home, so I am right there with you. I take the shot I am offered and will never pass up a mature legal animal because I want "something better". The nice thing about the .458 (I have had similar experiences with the ..375 and .416) is that you usually have very little ruined meat. Good hunt! Someday I would love to hunt Australia as well. I think some feral goat hunting sounds like a delicious way to fill a week.
"I am not a good shot, but I shoot often" - Theodore Roosevelt

ChrisG said:
Nice deer! That should be some good eating! I am not a trophy hunter when I am at home, so I am right there with you. I take the shot I am offered and will never pass up a mature legal animal because I want "something better". The nice thing about the .458 (I have had similar experiences with the ..375 and .416) is that you usually have very little ruined meat. Good hunt! Someday I would love to hunt Australia as well. I think some feral goat hunting sounds like a delicious way to fill a week.
Click to expand...

You won’t need a canon to take a Feral goat.
Many places muster and sell goats but there would be opportunity to shoot one.
Chris “Australia"
Dreaming of Africa, Hunted Africa, 2020
The website made me do it!
S

Nice! Congrats! The venison I mean, not the scope ding!
You must log in or register to reply here.

G
gprippers alg22 gprippers wrote on alg22's profile.
Hello! Im in Grants Pass Oregon, 97527 and if you want to do a one time package instead of hassling with selling and SHIPPING one or two boxes at a time...id do $1000 for the package shipped. Mark it sold and give me a shout if you want to accept my offer.
Ive got almost 500 A+ deals on ebay so im legit ( so they tell me! LOL!).
You are also welcome to call as well.
Thanks,
Rob/gotstuffguys
53 minutes ago •••
G
gprippers SAFARIKIDD gprippers wrote on SAFARIKIDD's profile.
Hello! Nice rifle! I have IDENTICAL rifle in 375 H&H so i was wondering what gunsmith did the work on it? Appreciate it and if you decide there is anything you are willing to take in partial trade, let me know. I have quite a few pistols, long guns and sxs & o/u shotguns as well.