adgunner said:
Well, finally started out on my trip to Argentina! Won't be out hunting until next Sunday as a little thing called work has to get done first! Only have one maybe two days to hunt so really hoping for good weather!
Click to expand...

Well, fellow, I hope the weather will good for you and the "antilopes" as we call here, are plenty for you in the field you go...
Godspeed and nice shooting!

So?... whath happened with the blackbucks?

Marcos, it took a second day due to the weather but I got a very nice blackbuck! Can't say enough good things about the guys at MG Hunting, first class outfit and excellent hunters. I'll write up a report here as soon as I sort out some photos

Have fun, shoot straight and take photos!
Full report when you conclude!

adgunner said:
Marcos, it took a second day due to the weather but I got a very nice blackbuck! Can't say enough good things about the guys at MG Hunting, first class outfit and excellent hunters. I'll write up a report here as soon as I sort out some photos
Click to expand...

A week ago I had the distinct pleasure of hunting with MG hunting in Argentina for Blackbuck. As I mentioned above this was going to be a short hunt as I was combining it with a work trip in Argentina. I would only have one maybe two days to hunt and knowing this I contacted MG Hunting and they agreed to pick me up in downtown Buenos Aires last Sunday. It sure felt strange to be standing outside a rather nice hotel at 0630 hrs in my mossy oak hunting clothes waiting for Marcelo and Pedro (father and son) from MG hunting. Got a few looks from the guests in the hotel . They arrived on time and we were off. It had been raining really hard the last few days and today was no exception, howling wind and pouring rain, but with only one day to hunt we pressed on. We met up with our local guide Paulo and headed into where we would spend the day hunting. The local rivers had flooded their banks and a lot of the fields looked like nice bass fishing lakes rather than the farm country we would be hunting.

This photo was taken the next day when the weather had cleared and it was one of the good roads! 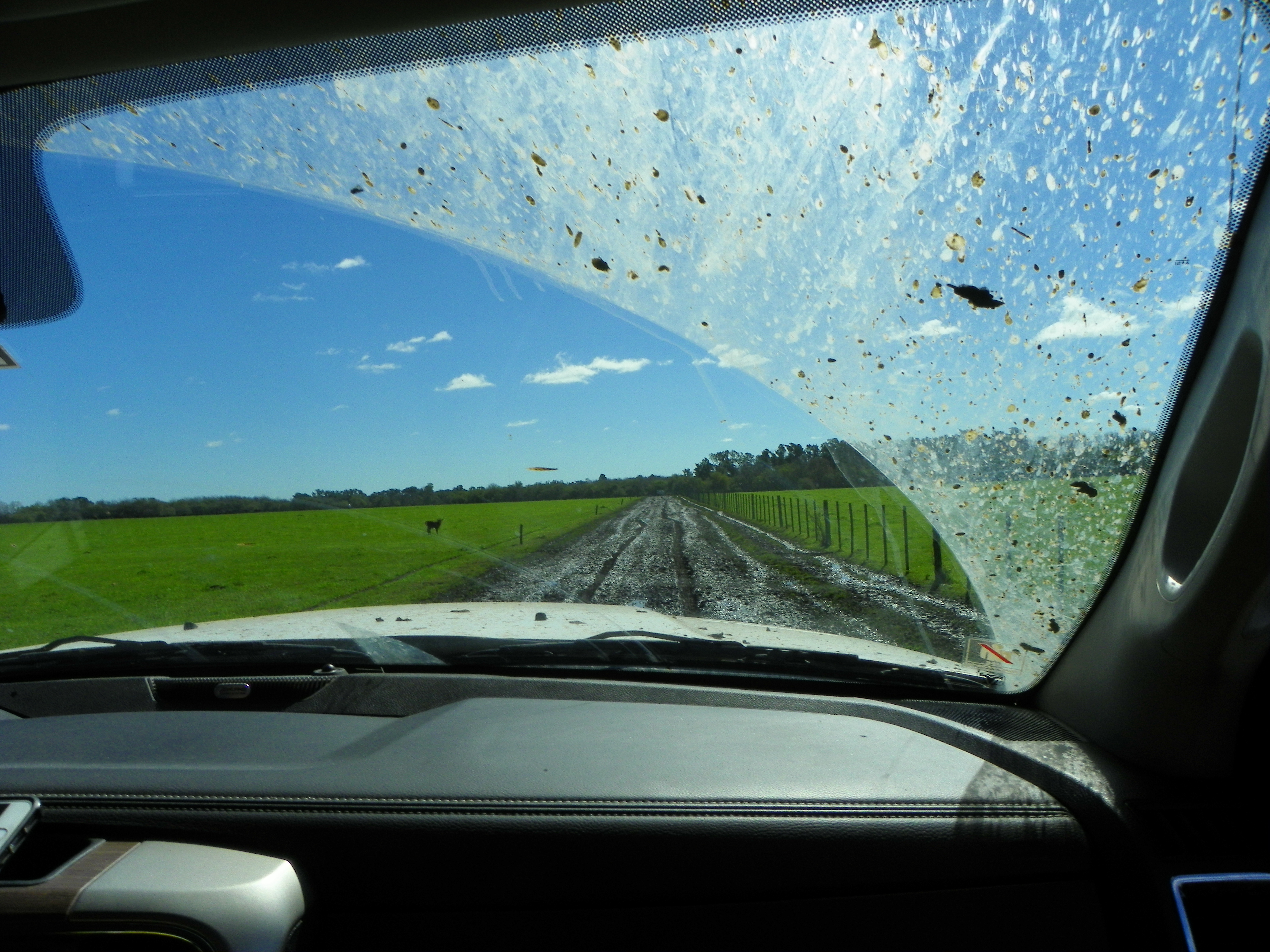 It wasn’t long and I got my first glimpse of a blackbuck and I quickly realized they have been blessed with that incredible antelope eyesight and didn’t like to hang around at all. It became apparent to me that with the really open flat terrain this wasn’t going to be exactly easy. The blackbuck seemed to like to hang out in the open areas far from any cover making it even more difficult than I expected. This pic gives a pretty good view of the terrain we were faced with. 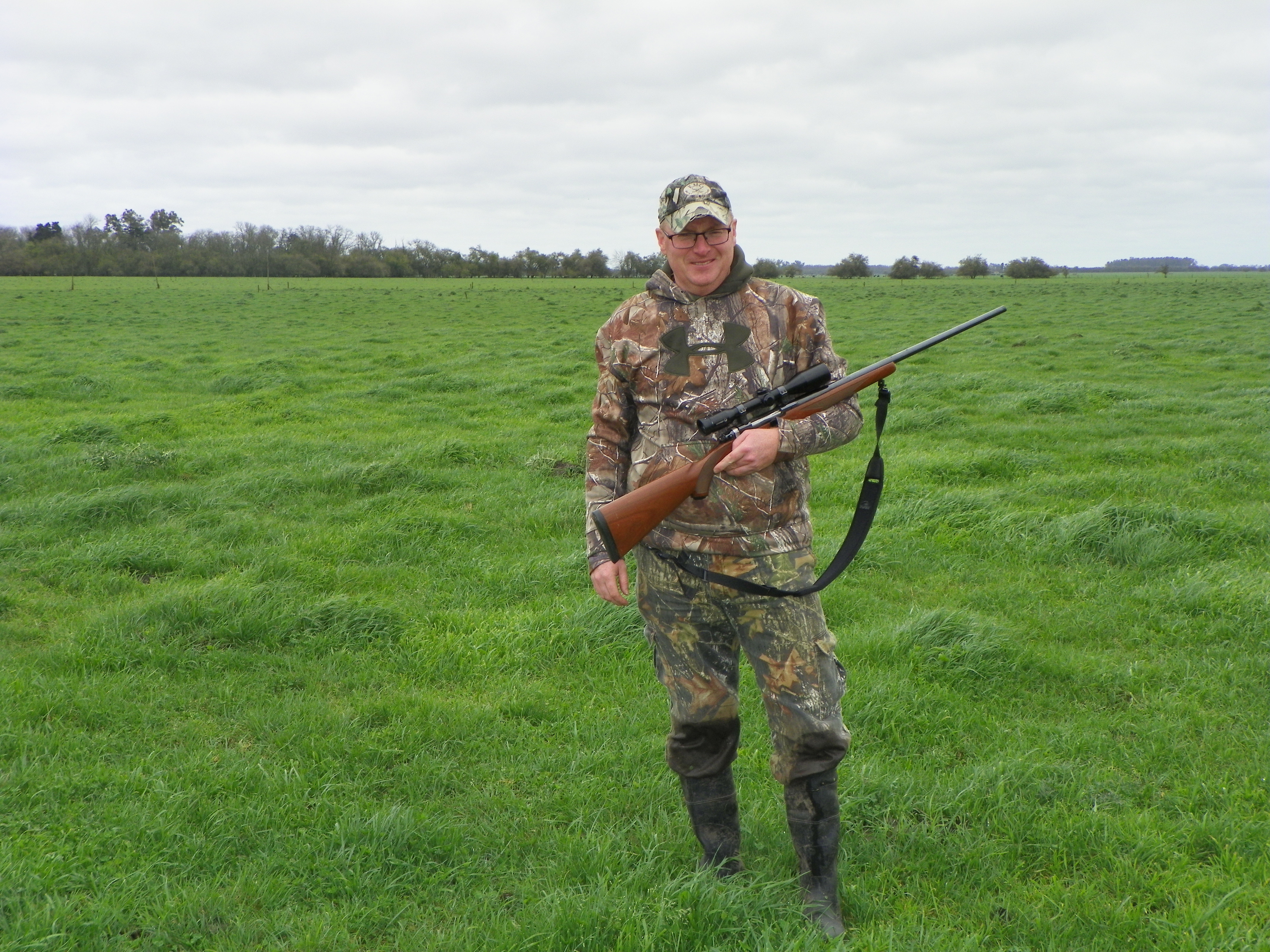 We spotted some Blackbuck lying down in a field and our first stalk was on. We used the cover of some mature forested trees to work our way towards them and I was quite confident we would be able to get in close …. not a chance … we were picked off at quite a distance and my first really good look at a blackbuck was of them walking away from us!

We spent the rest of the morning attempting to get close to a rather large group of blackbuck but to no avail. Howling wind and perpetual rain made lunch seem like a great idea and we decided to take a break. We were treated to a fantastic three course meal in the field with the highlight being some fine Argentinean steak. The guys at MG hunting really know how to lay out a spread for some hungry hunters and Marcelo in addition to being an excellent hunting guide is a pretty fair cook I might add.

It wasn’t easy after that meal to head back out let me tell you! The afternoon was spent fighting the weather and the muddy roads mostly until we spotted some Blackbuck and slipped out of the truck and into stalking mode. We got into position, the sticks went up and from the standing position I tried to get onto the blackbuck which had spotted us and was walking away. Marcelo whistled and the blackbuck stopped for a second, I squeezed the trigger and sent one sailing harmlessly over his back. I was crushed as the day was slipping away on us quickly. We tried another stalk which didn’t end any better than our previous stalks had and I resigned myself to going home with just memories, which I might add would have been just fine after the great day I had had chasing these nimble little antelopes around all day with Marcelo and Pedro.

I knew that I could get out tomorrow if I had too …. work could wait … and after a quick discussion the guys at MG agreed to pick us up in the am and we would give it another go.

The next day started out much better with some blue sky peaking through every now and again. I switched rifles (stepping up from the .270 to the .300 Win Mag) and after a quick shot to confirm zero we were on our way. We spotted some blackbuck along a tree line and utilizing a perpendicular tree line managed to get at least a little closer. There were two good rams in this group that I could see, but it was just too far for a shot. A group of ewes broke away and started to head directly towards us, Marcelo whispers “those rams will follow them over” and I settled in on the sticks hoping for a chance. The ewes came close and passed by on my right shoulder while we remained stalk still. You would think the rams would follow along, nope they just turned and walked away into the wood line as I stared at them incredulously for ruining my plan.

We decided to move to another area and Pedro spotted a nice group of blackbuck in a field and we were out of the trucks in a flash (I say trucks here because we definitely needed two as we had pulled out the lead truck out of the mud several times over the previous day) and into stalking mode. Using some unexpected tall grass and shrub which we kept between us and the blackbuck we got to within about two hundred and fifty yards and I stood up to get on the sticks. Marcelo pointed out the last ram and I settled the crosshairs on him as he walked away from us increasing the distance with each step. He paused, I squeezed and at the shot he went straight down. 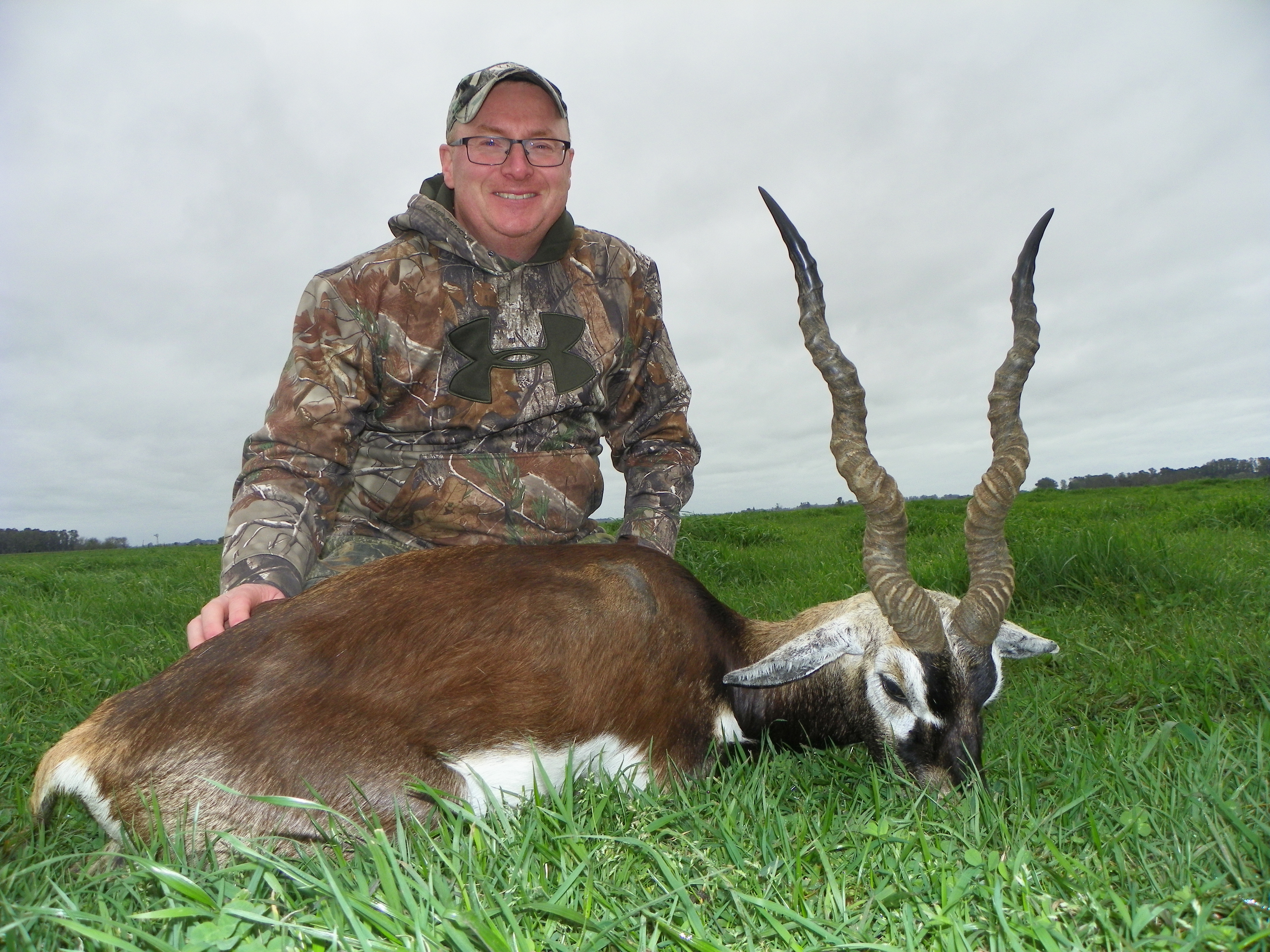 We loaded him up and proceeded to head out for another magnificent feast cooked up by the guys at MG and passed these guys who had no difficulty getting around in the mud. 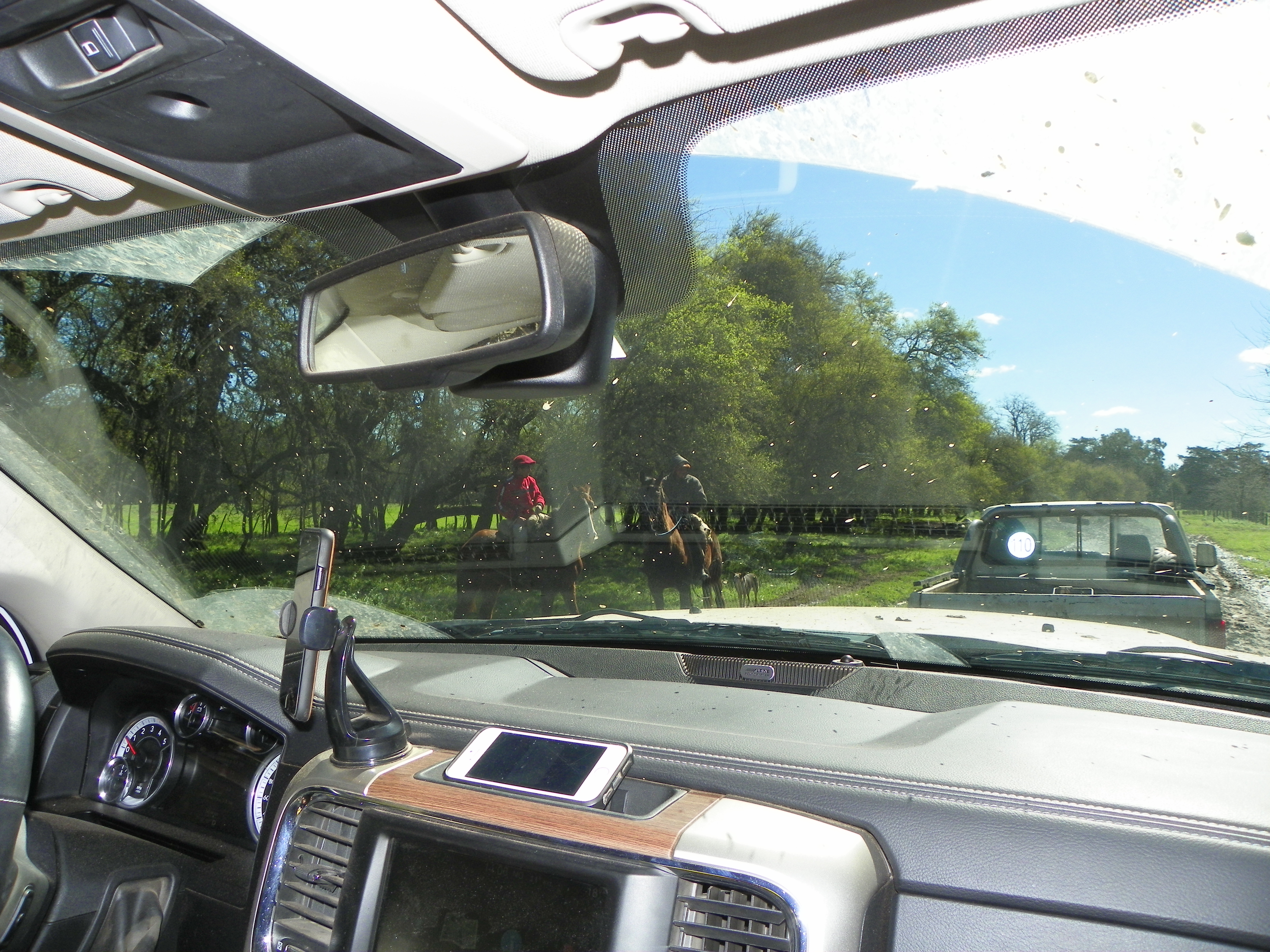 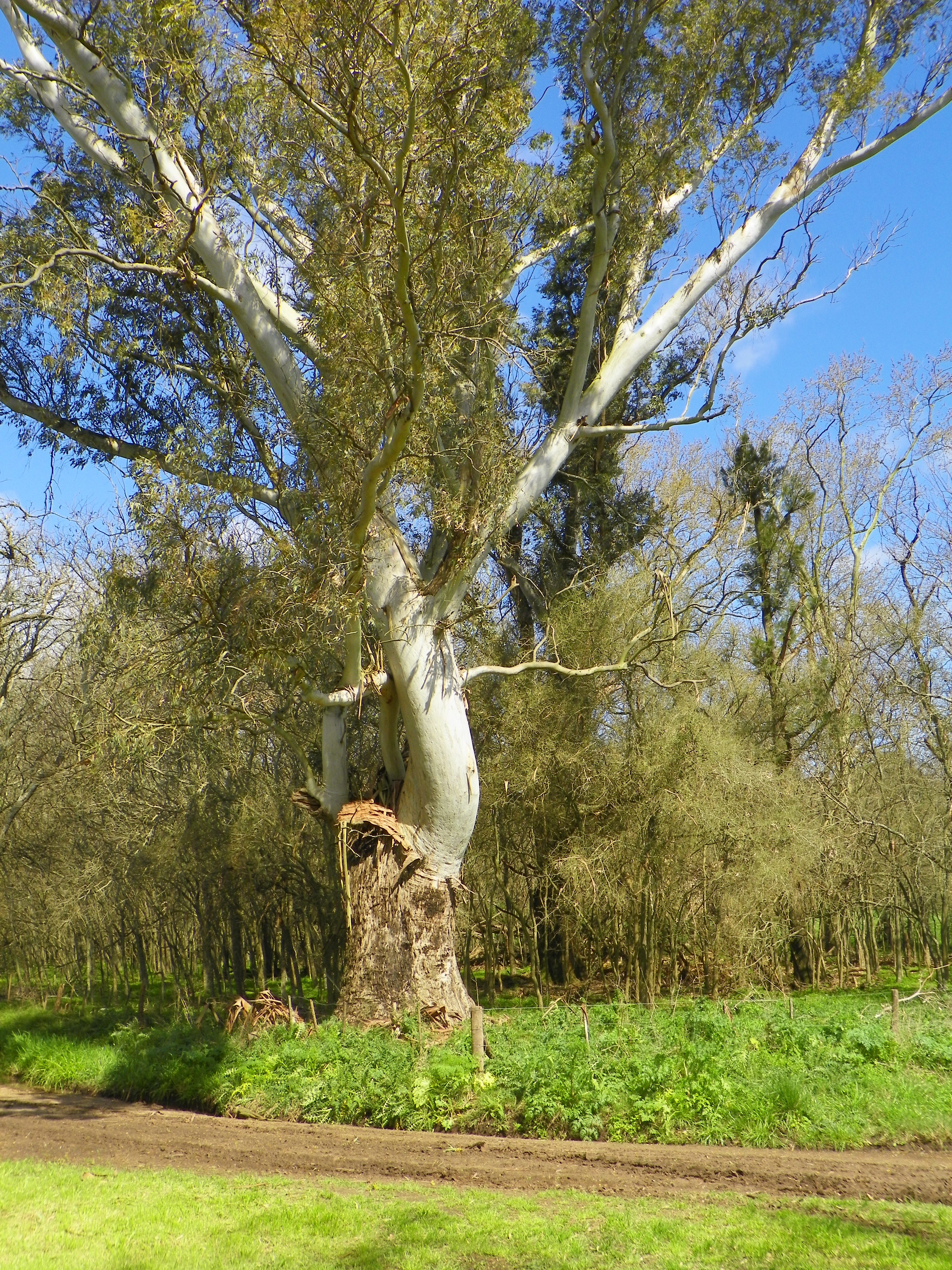 The area we hunted also boasted many axis deer. 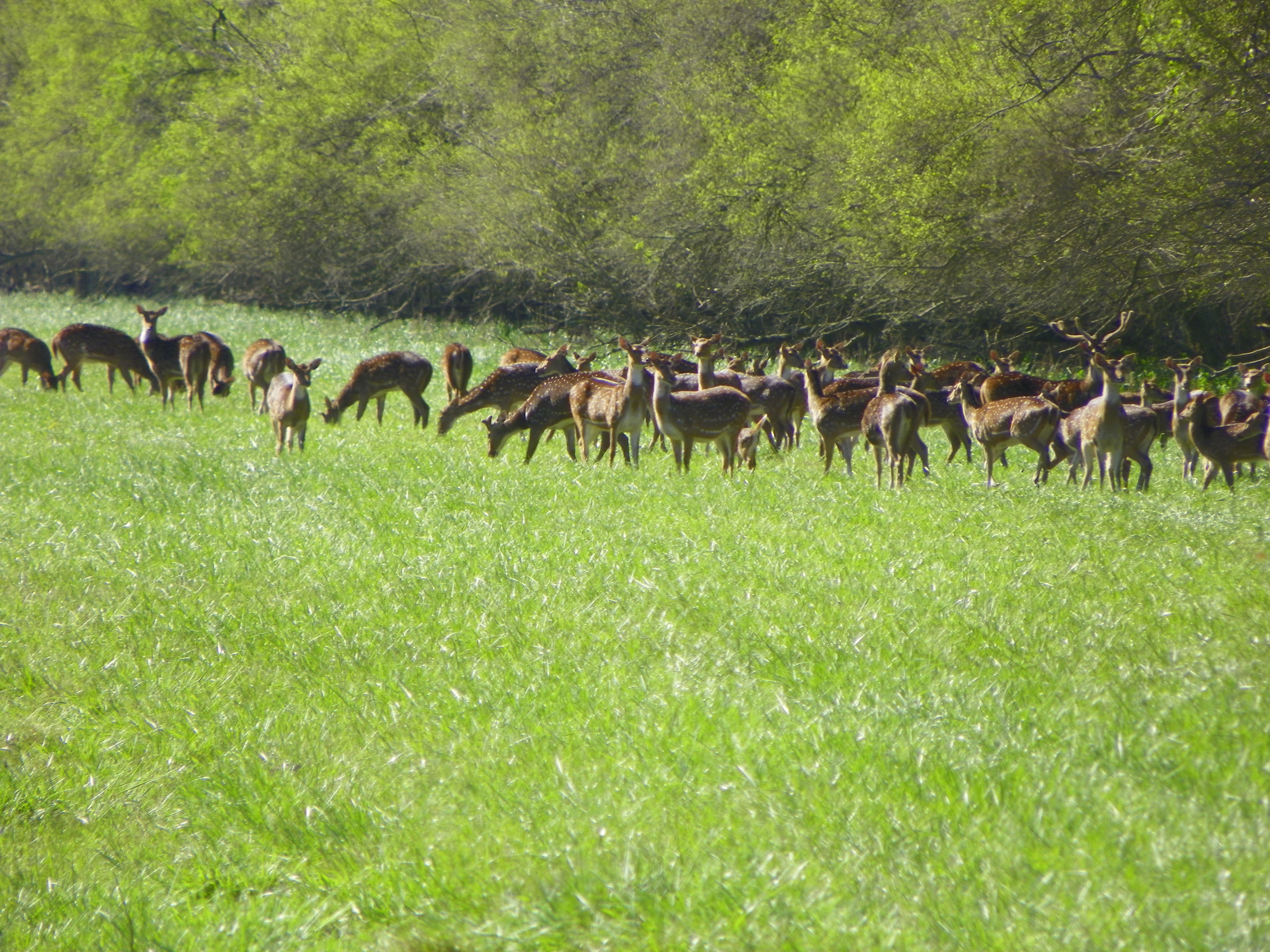 Typical Blackbuck way out in the centre of the fields. 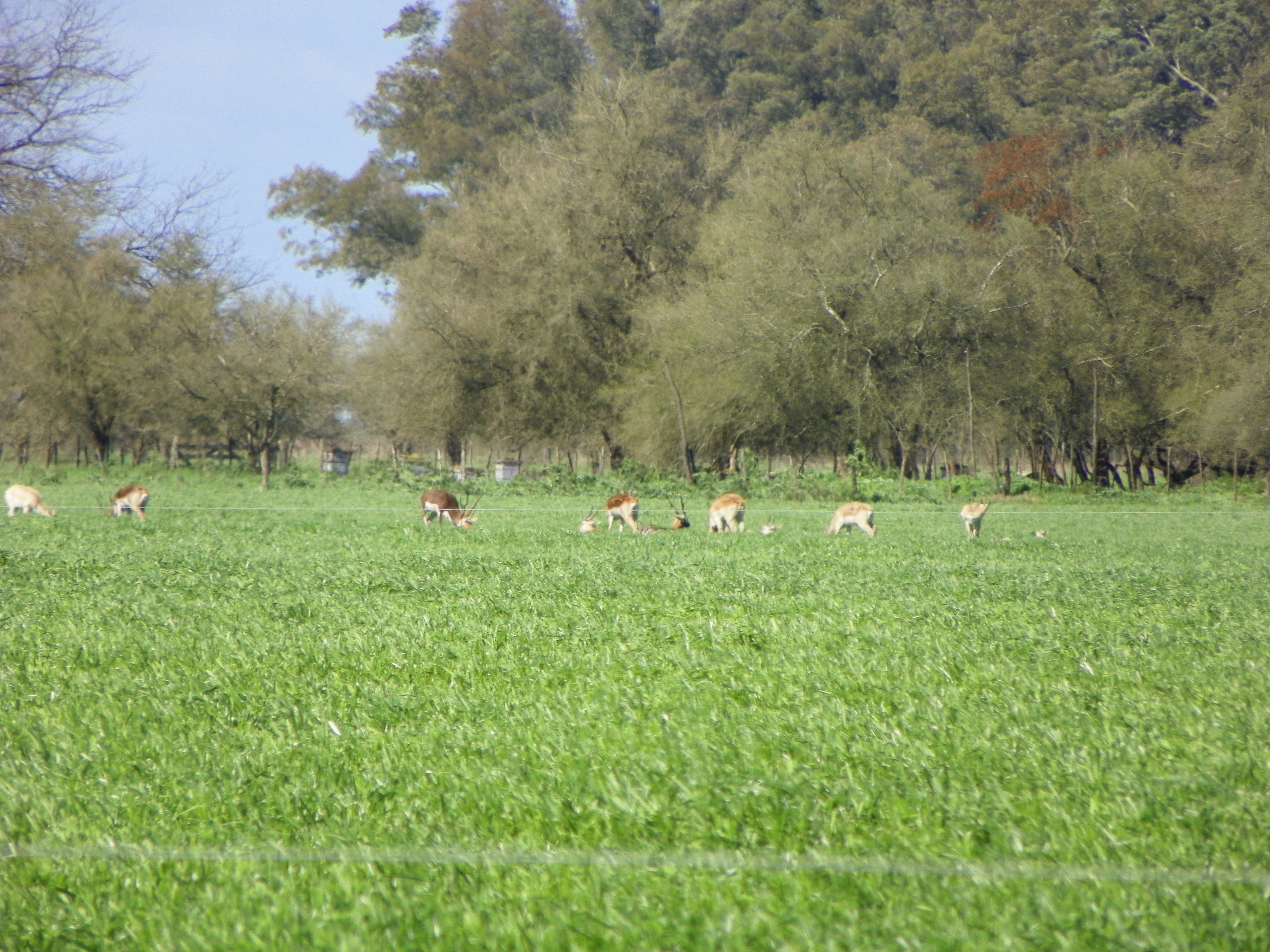 I can’t say enough about the hard work of Marcelo, Pedro and Manuel at MG hunting. A great group of guys and great hunters. I hope I can make it back to check out the doves and ducks they were talking about one day soon 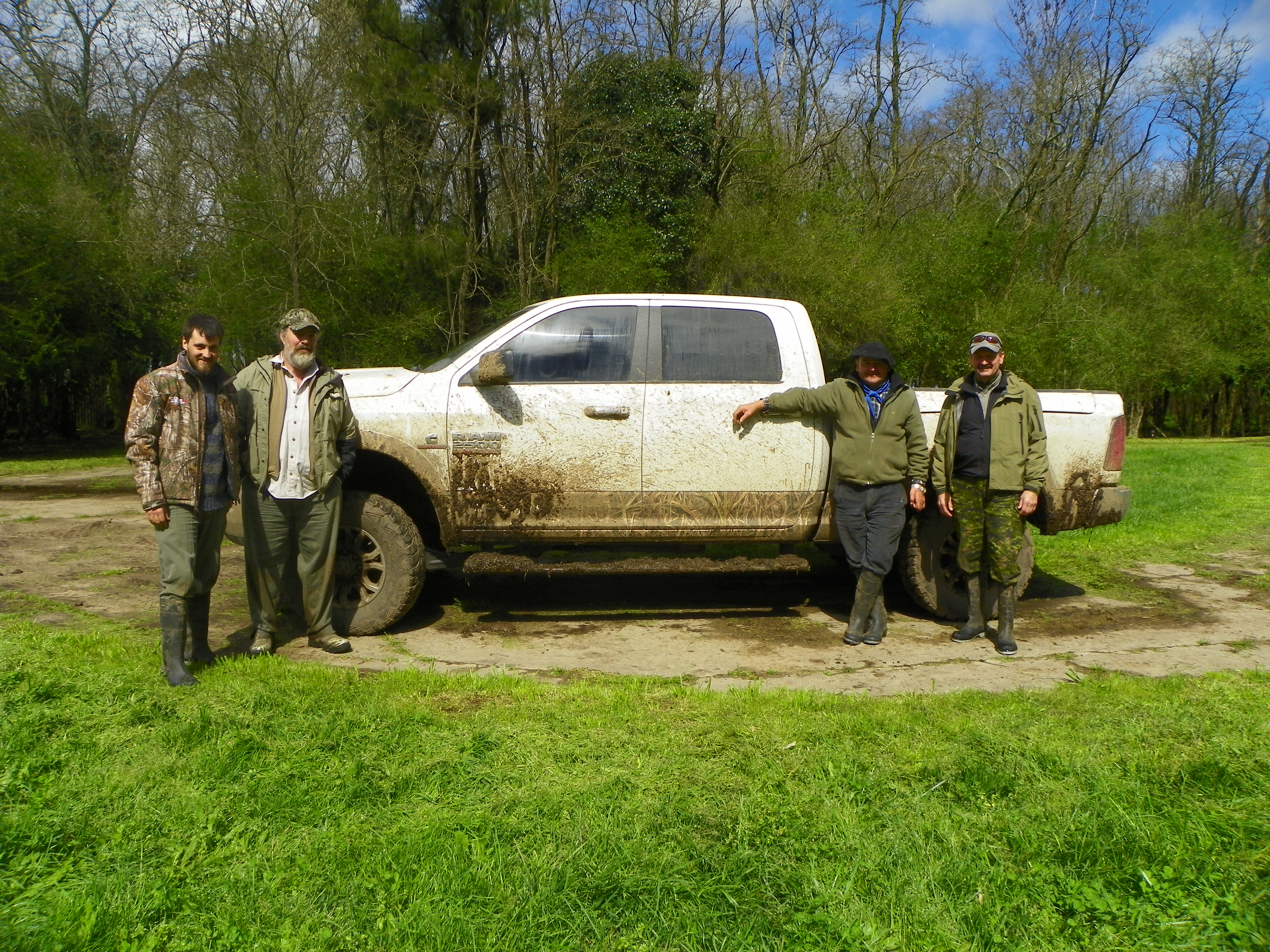 adgunner said:
Marcos, it took a second day due to the weather but I got a very nice blackbuck! Can't say enough good things about the guys at MG Hunting, first class outfit and excellent hunters. I'll write up a report here as soon as I sort out some photos
Click to expand...

Fantastic, glad to hear you had a good hunt! And, I enjoyed reading the report - rain is just miserable. Good for you for going out that second day.
Last edited: Sep 17, 2017
"When my friends tell me that I have led a remarkable life, I have to admit having done my best to make it so" - John Kingsley-Heath

Congrats on your blackbuck...they are such a beautiful trophy! Great way to spend a couple of days as well!
"I don't need to shoot farther...I need to hunt closer." - G. Sitton

Thanks gents, it was pretty cool to squeeze in the hunt and get out of the city and really see what the countryside of Argentina looked like. Cities the world over all kinda look the same to me

Vety hard and wonderfull hunting trip!...
Congratulations, Rod!...
I hope you will return to Argentina soon... And enjoy travelling around the country!... Buenos Aires are only any more city of the world, as you certainly says... but we have an excellent country with fine people and great hunters!....
And big boars too hahahaha

Congrats! Were you able to bring the trophy home on the plan? Or did it have to dry and get Vet certification?

Thanks much for posting this report as I have been waiting for it. I may end up in Argentina next year and would like to hunt while I am there.
Congratulations!
Life is too short to hunt with an ugly gun

HuntingGold said:
Thanks much for posting this report as I have been waiting for it. I may end up in Argentina next year and would like to hunt while I am there.
Congratulations!
Click to expand... 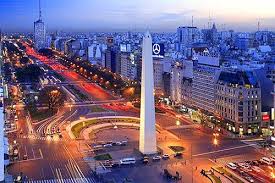 the best thing is to have the chance to pull the trigger.......

You had a great hunt, congrats. Are you working on your boss for a follow up?

enysse said:
Congrats! Were you able to bring the trophy home on the plan? Or did it have to dry and get Vet certification?
Click to expand...

I actually decided to leave the cape and horns there and have the taxidermy done in Argentina.

HuntingGold said:
Thanks much for posting this report as I have been waiting for it. I may end up in Argentina next year and would like to hunt while I am there.
Congratulations!
Click to expand...

Hope you get the chance!

Shootist43 said:
You had a great hunt, congrats. Are you working on your boss for a follow up?
Click to expand...

My boss actually came along on the hunt as an observer....I created a monster ... he is totally hooked .... hopefully there will be a follow up visit!

Well the boys at MG Hunting sent me a photo of my Blackbuck and hopefully we will be able to get him moving towards Canada soon! 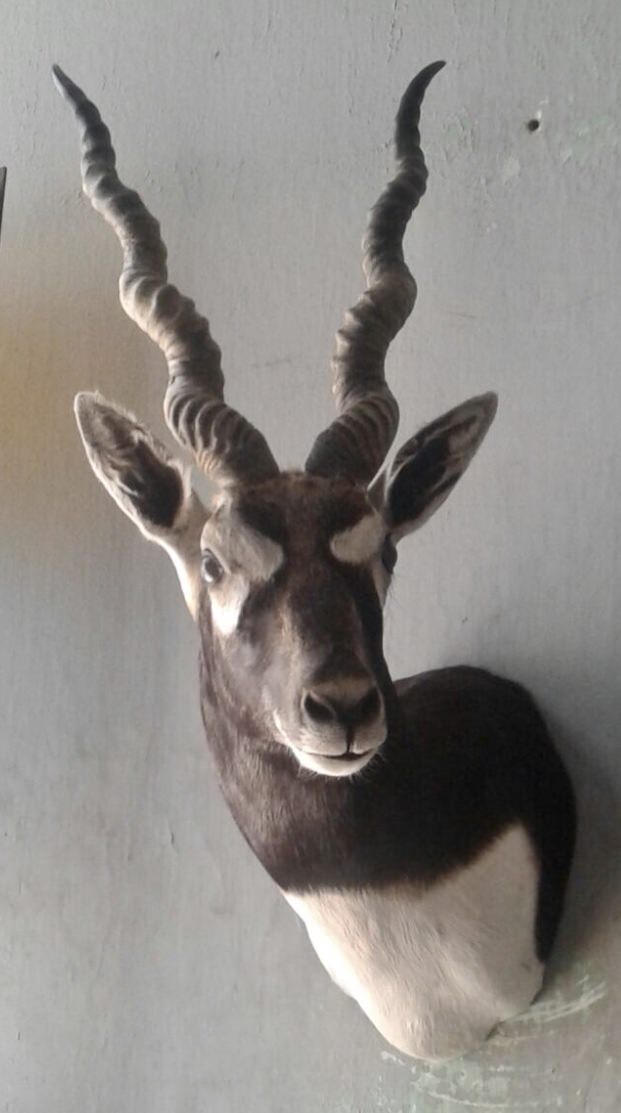 ARGENTINA: Doves, Ducks, Perdiz & A Bit Of Tango With MG Hunting In Argentina

ARGENTINA: On My Way To Hunt The Red Stag Roar With Rocket!
2 3 4