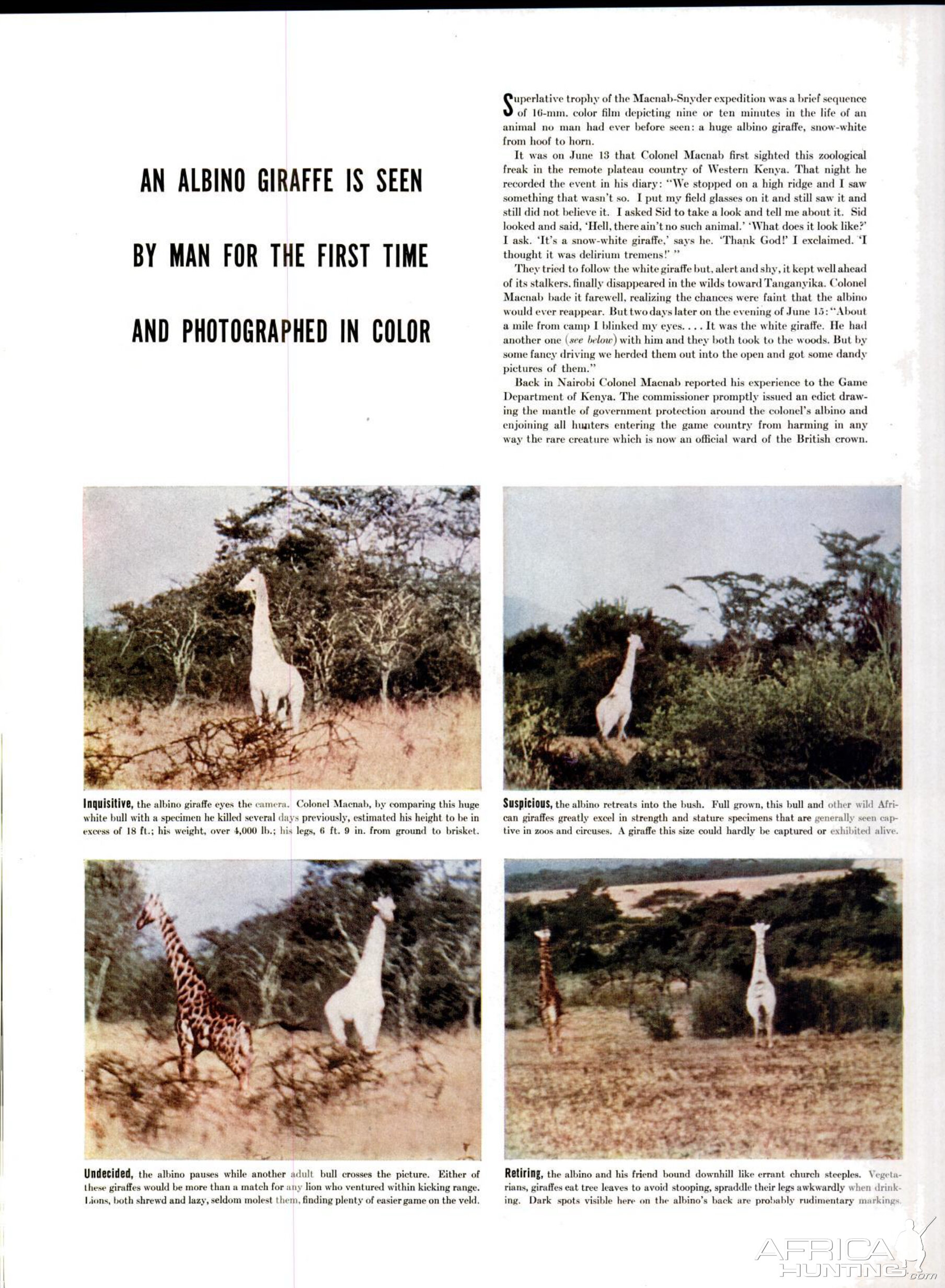 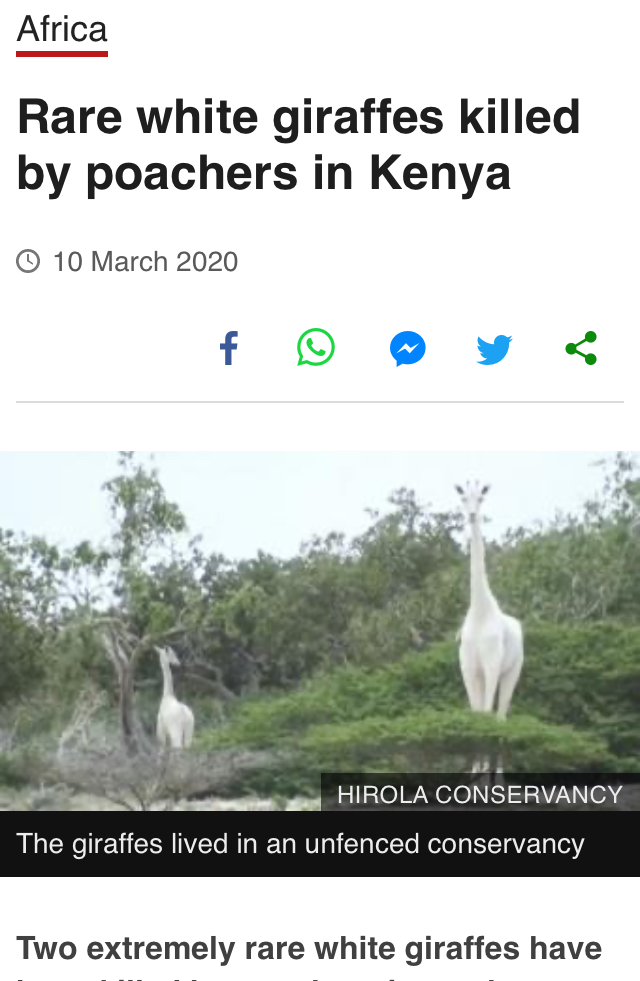 Reminded me of an article I read earlier this spring about a couple white but not albino giraffe in Kenya. Sadly poached, despite their unusual popularity-

All the way back to 1938 for the magazine article is amazing to see,

I wonder if these giraffe's are white or truly albino?

People have a tendency to conflate the two, but of course they're very different. A white blesbok or springbok (or bear for that matter) isn't usually an albino, it's just another colour phase of the animal. These are not just differences in quantity, or variations on a spectrum, but differences in kind.

Human beings are much the same. The fact that, for examples, Scandinavians are generally blonder or have a fairer complexion than say, Southern Italians (with apologies to both - no offence intended!), doesn't mean that Scandinavians are in any way albino or closer to being albino than Southern Italians. To be truly albino, the giraffe would have to have a complete absence of melanin in its skin, not just less melanin than some other animals of its species. This is a genetic defect and an enormous survival disadvantage. A white colour phase is simply the same animal on a spectrum. If you have very pale skin, you might prefer to stay out of the sun, although with sun exposure, you will eventually develop a darker skin. An albino individual will never tan or develop a darker skin in response to sun exposure. So an albino animal, which doesn't know to stay out of the sun, would likely develop painful skin burns from sun exposure from birth, and cancer if it survived long enough. It would also likely quickly become blind due to defects in vision and the sensitivity of the eyes to sunlight which accompany albinism.

The fact that the two giraffes in the Hirola Conservancy picture are both white and appear to be an older and younger animal - perhaps parent and offspring - leads me to believe that these are white giraffes and not albino. White would certainly be a recessive gene in giraffes, but clearly a white parent would be at greater likelihood of having a white offspring, regardless of the colour of its mate. Albinism too can be inherited, but typically the gene defect must be present in both parents, and even then, the odds are only about one in four that the offspring will have the trait.

And that just about exhausts my knowledge of genetics.

If you do a search for “white giraffe” or “albino giraffe” on this site or the common internet you will find some fascinating pix and stories. I just got a “new” book, recommended by someone on AH and it has a wonderful pic of a white giraffe. This is from Anno Hecker’s book, “That’s Africa” which has been an interesting read so far. 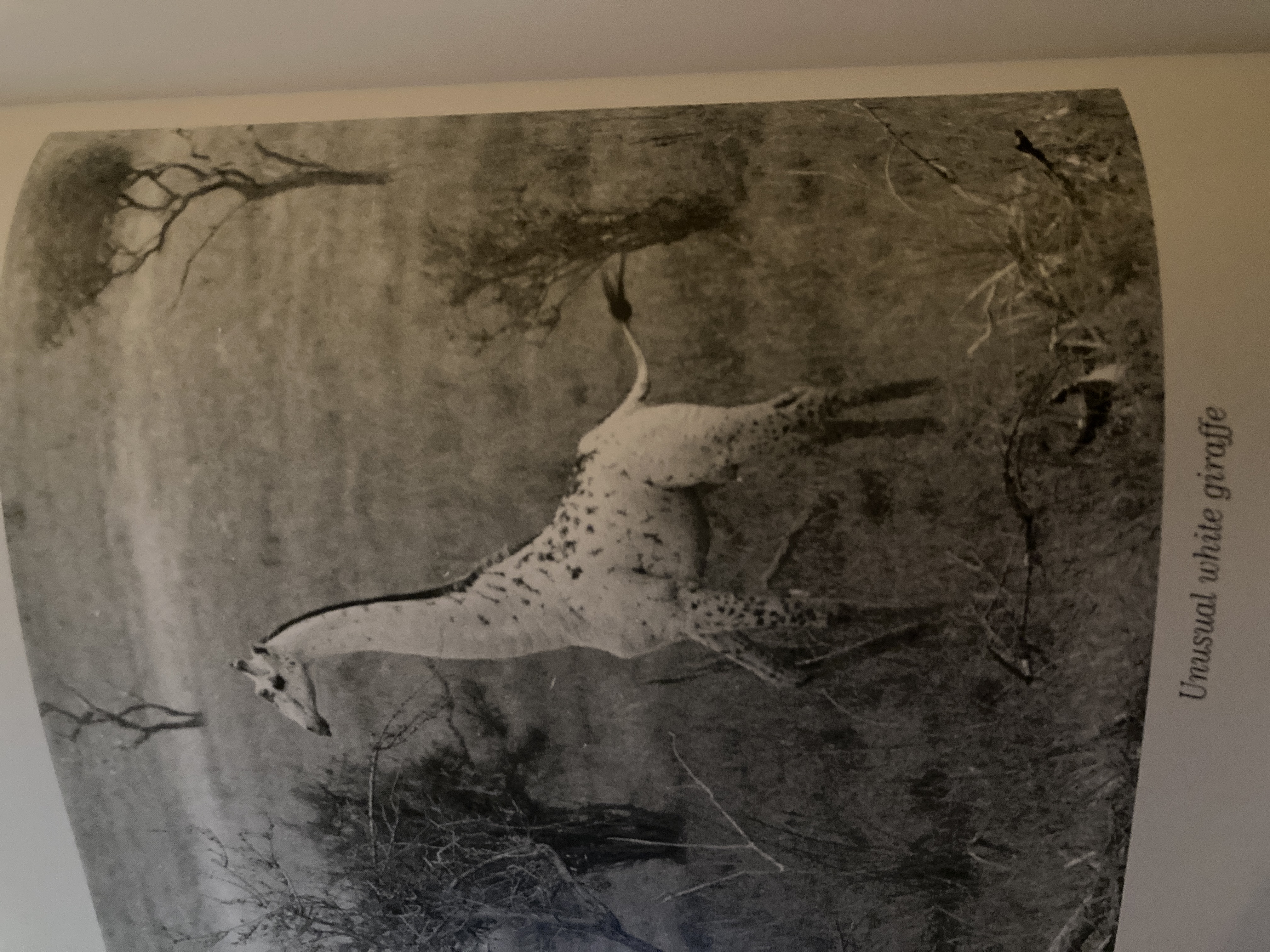 Similarly in Eric Balson’s book “On Safari with Bwana Game” he provides a pic of what he calls an albino giraffe which does seem to lack the colored mane and seems to have pink eyes-its an old photo tho. Nature is truly magical, I love these special animals and give thanks for those who have taken time to preserve them in book form and otherwise. 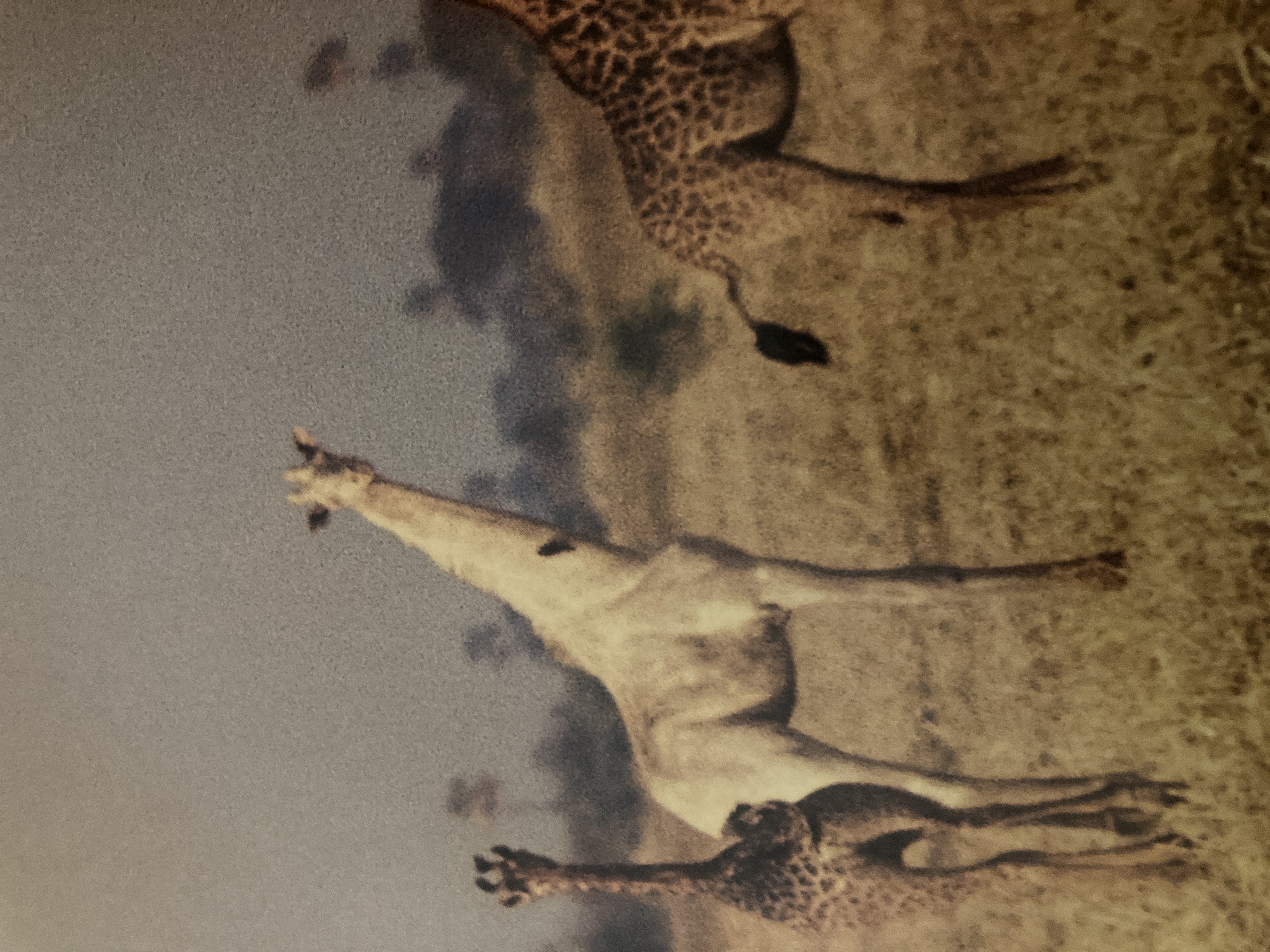 There is a picture of an albino giraffe in Tony Seth-Smith's excellent book For the Honour of a Hunter. He comments even the hooves were white.

Thanks for the tip-just secured a copy of that book from Amazon-had never heard of it previously!
You must log in or register to reply here.