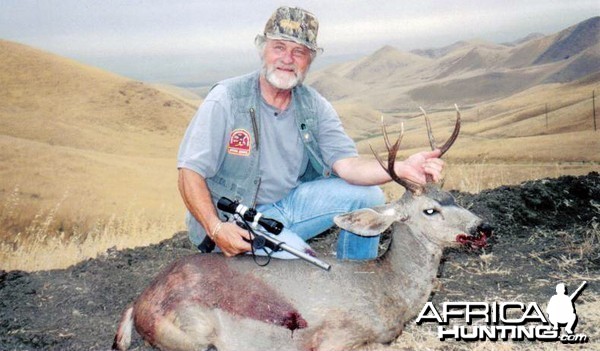 A zone deer season in cal had been going on for some time, Deena and I had seen nothing. It was in September and the day was looking dark and rainy. We decided to go up to the foot hills after work and take a look and see if the rain would bring out the deer. The property we hunt is private but it doesn't hold much game. It is very desolate land. Mostly used for winter cattle graze. Rolling hills of yellow grass in the summer. But, every now and then we luck out and find a wild pig or a deer.

The deer are small deer, always forked horns, but because of the acorns, the meat is gourmet delicious. Any way, we went up after work to see what we could see. We arrived at the gate about 4 o'clock, unlocked and drove through. The clouds over head were dark and ready to burst, a quite, cool air with a slight breeze was present. We didn't know what to expect as we drove the trail up into the canyon. It wasn't ten minuets into the property that we saw a set of horns off to the left of the trail. Deena started to get out of the truck but the buck jumped up and took off. It was a nice forked horn. We had never seen any deer this close to the gate before.

Deena got back in the truck and off we went. Off to the right we saw two does watching us as we traveled the trail. They were about three hundred yards up hill looking down. This was our first experience in this kind of weather and it sure had the deer out in full force. We kept on driving and off to the right Deena spotted three deer looking down at us. Two were legal bucks and the third looked bigger. We stopped and got out. The range finder said 279 yards. I wanted Deena to take one as she was shooting her 7. 30 waters contender and she has taken antelope in Wyoming at that distance. Deena has great control and thought it was to far. I on the other hand tend to be a hotdog some times, and decided to try for it.

I was shooting my encore in 308, with 180 gr partitions with an 2x8 powered scope witch I turned to 8 power. I had a big boulder off the trail and my good old duffel bag I'm used for a rest for twenty plus years. The scope has a dot witch I have learned to love and I settled it behind the front left shoulder below the backbone and squeezed the trigger. WHOP, music to my ears. The bigger buck turned and took three steps up hill and went down. Deena and I were ecstatic. We waited for ten min and got back into the truck and continued up the trail. The trail winds up and around the hill the deer were on and we wound up cutting the distance to the deer down to about 60 yards we had to drag him to the truck.

When we reached the deer I was surprised to see he was a 3x2. We had never seen anything but forked horns. We drug the deer down to the trail by the truck and did the pictures and field dressing and tagging. We then went to a windmill where we hung and caped and skinned him, and took him to our meat locker to age and be processed. On the way out we spotted another legal buck that just stood off the trail at 99 yards away, Deena could of dropped him easy but figured we had our deer and didn't want to be greedy. So, off we went with our after work buck. That is what makes hunting so exciting, you just never know what's going to happen. ED
Last edited by a moderator: Dec 1, 2016
You must log in or register to reply here.